It is one of the best-known Italian recipes in the whole world and it boasts countless imitations, but what is the real origin of Ragù bolognese?

Born as a meat dish in Renaissance France, the Ragù recipe traveled to the Neapolitan Bourbon court and then spread throughout Italy. Those were times when nobles led trends in fashion, costumes and even cuisine.

Nowadays Ragù Bolognese is one of the best known and most famous recipes in the world. Especially famous in Italy, it has spread abroad thanks to Italian immigrants who brought with them the flavors of their native land. There are countless international variations, such as Spaghetti Bolognese, an American transposition of the original recipe.

But where does Ragù come from and where do its two most famous versions (the Neapolitan one and the Bolognese one) come from?

It is thought that the origin of the term Ragù is linked to the French equivalent “ragout“, a term used to define stews of meat and vegetables cooked over low heat for a long time.

The ancestor of what we now know as Ragù was in-fact a preparation of the French medieval popular tradition of the XII-XIV, which consisted of pieces of meat, vegetables or even fish stewed slowly. It could be either a rich or a poor dish, depending on the cuts of meat, spices, and garnishes that were used. Obviously, at that time it did not include the use of tomatoes.

From France this preparation arrived to the kitchens of the Neapolitan Bourbon court and those of the Vatican, but it was still just a way of cooking meat with significant variations and ingredients, depending on the area of Italy.

In 1773 Vincenzo Corrado in his book “Il Cuoco Galante” describes for the first time a dish that could be defined as the first Ragù, but the ingredients were not yet defined (it could, in fact, include vegetables, various meats, prawns or even eggs) and it was still being cooked in a broth with vegetables and aromatic herbs.

However, in the meantime, the recipe had become part of the Italian cuisine and it spread throughout the national territory with new variations and new ingredients such as the use of tomato, which appears for the first time in 1790 in the “Maccheorni alla Napolitana” recipe, contained within the cookbook “The modern Apicius” by Francesco Leonardi.
Ragù, even if famous, was still considered a meat dish with sauce, and this is how Puccini remembers it in his Bohème.

In the following years, versions of the same dish with or without the addition of tomato would alternate. It wasn’t until the twentieth century, with the spread of tomato sauce and pasta, that this recipe became the Ragù that we still cook and love today.

However, throughout the 19th century, Ragù spread throughout the Italian peninsula with the introduction of local variations, such as the use of pork meat, the preparation of small meatballs (as in the Neapolitan and Abruzzese tradition) and the combination with local types of pasta, such as the handmade pasta in Bologna.

When in 1891 Pellegrino Artusi in his “Science in the Kitchen and the Art of Eating Well” described the “Bolognese macaroni” he wasn’t aware of the fact that he was laying the foundations for one of the most famous recipes of the Italian cuisine.
Tomato was not yet included, but almost all the other ingredients were there: salted pork belly, veal, celery, carrot, and onion, all cooked with meat broth.
Artusi also suggests some additions to enrich this sauce: dried mushrooms, truffles, chicken livers and cream. It is a white ragù, without tomate but rich and tasty, as the Bolognese tradition wanted.

The definitive transformation takes place at the end of the first decade of the twentieth century, when Tagliatelle officially replaced Macaroni and tomato became an essential ingredient.
Completing the list of ingredients for Ragù is fresh pork meat, but only after World War II, as reported by the famous Italian recipe book “Il Cucchiaio d’Argento“, with a recipe that has remained substantially unchanged until today.

A recipe that, however, does not correspond entirely to the one patented in 1982 at the Bologna Chamber of Commerce by the Bolognese Delegation of the Italian Academy of Cuisine. But perhaps this is part of the beauty of Italian cuisine, where recipes change from home to home, from family to family.

The recipe for “Classic Bolognese Ragù” was patented at the Bologna Chamber of Commerce on October 17, 1982, by the Bologna Delegation of the Italian Academy of Cuisine.

Preparation:
First dice and then finely chop the pancetta with a mezzaluna knife, then melt it in a terracotta or aluminum thick pan of about 20 cm in diameter. Combine 3 tablespoons of oil or 50 g of butter and the finely chopped vegetables and let them cook gently. Add the minced meat and mix well with a ladle until it’s cooked and it “sizzles”. Pour in the wine and stir gently until the alcohol has completely evaporated. Add the passata or the peeled tomatoes, cover and simmer slowly for about 2 hours, adding broth when necessary, then add the milk towards the end to counteract the acidity of the tomato. Season with salt and pepper. In the end, when the sauce is ready, according to the Bolognese use, add the cream if it is to season dry pasta. For tagliatelle, use as is. This is the “updated” recipe of the real Bolognese ragù, patented at the Bologna Chamber of Commerce on October 17, 1982, by the Bolognese delegation of the Italian Academy of Cuisine . 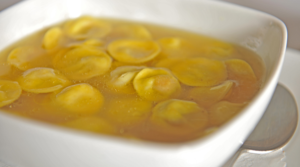