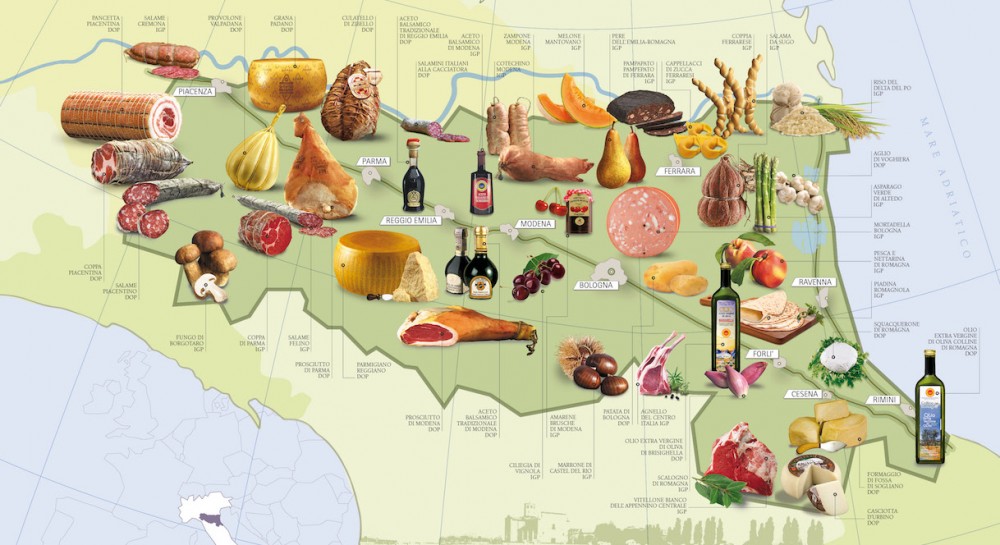 It is said that it is the Gastronomic Treasure of Italy, where the foods and basic preparations of the Italian cuisine are collected. And it is: the Emilia Romagna region of Italy is a unique place in the Mediterranean and European Food Culture.
Halfway between the mild climate of Mare Nostrum and the European traditions, Emilia Romagna is both center and transit point of people and cultures of the European continent, in a location that make it the cradle of what is considered one of the world’s best kitchens.

Here in 1500 the court cuisine (the Este’s) was born, here the first books on good food and on how to behave at the table were written and here Pellegrino Artusi was born, that collected 300 years later all dishes and recipes of the Italian regions.
Moreover Emilia Romagna is the Italian region with the highest concentration of Protected Designation of Origin products of Italy: 43 from the sea to the mountains, from the plains to the cities.

There are definitely Historical Reasons for this international leadership: Emilia Romagna is crossed by roads and cultures, as evidenced by the Via Emilia and it was destined from its founding in Roman times, to have to be some kind of immense library of the continental cultures.

In terms of Social Reasons we must mention the wine consortia, social cellars (among the first to be founded in Italy), in the culture of participation that has always characterized this agricultural region.

We have already spoken about the Geography: halfway between Europe and the Mediterranean, the Emilia Romagna is shaped by an immense valley cradled by hills, flanked on the right by the sea and to the south from the Apennines that divides it from Tuscany, from Umbria and Marche, that have been able to do the art of pork processing, a real philosophy of life.

From all this derive what we call the Human Reasons: the pleasure of meeting foreign people that are passing here, the taste of hospitality and to work with and for others guest: wayfarers, travelers or the other consortium members.

And the art of cooking and processing of foods has become important and so significant that only here you have to answer questions at the grocery store, such as “What kind of Prosciutto do you need? Parma or Modena? Aged 18 or 24 months… and Parmigiano? Do you wants 24 o 30 months? What do you have to prepare?“

If we were to summarize in one sentence the whole of the Emilia Romagna’s gastronomic culture, we could say that it is “the pleasure of the handmade”, the pleasure of producing foods according to precise dictates, well-established processes and entrusted to the great texts of the kitchen.
So, today we would like to introduce you in some of these products. 5 products on 43 in totally, just a taste of what is the greatest library of DOC and IGP products of all of Italy. 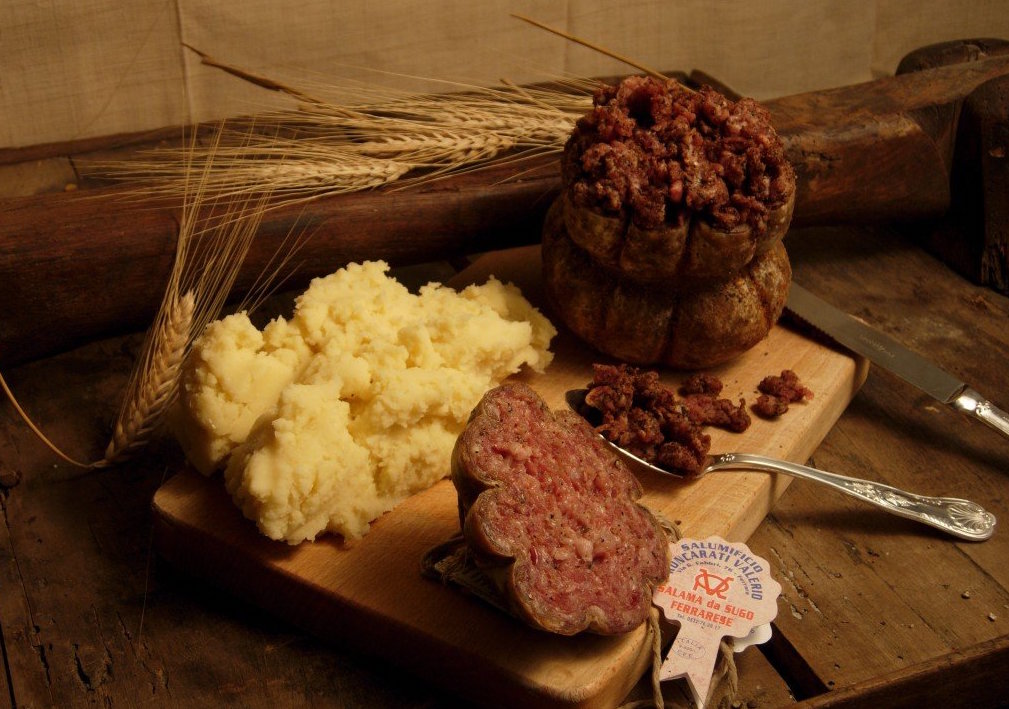 The first records on the Salama da Sugo date from the 15th century, with a letter by Lorenzo il Magnifico to Ercole II d’Este. A short poem, written in 1722 and entitled “Salameide” is dedicated to this delicious dish. The term Salama da Sugo is also to be found in the famous Modern Dictionary by Alfredo Panzini. The Salama is an unusual mixture of pork meat with spices and red wine, sometimes enriched with Marsala wine or Brandy, which acquires its unmistakable taste after a long seasoning period, during which it remains either hanging from the ceiling or “resting” under the ashes in a cool, airy and above all dark room. The writer and great gourmet Mario Soldati said that the salama “alone was a satisfactory and extremely satisfying meal“. The salama is still produced according to the tradition and can be bought in many butcher’s shops that guarantee the quality of their products. 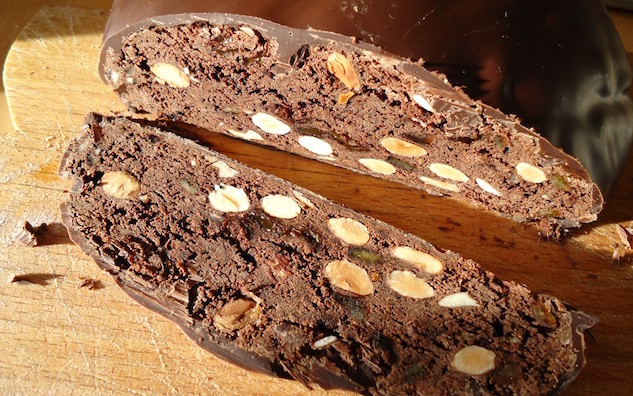 During the 1600s, the nuns of the Corpus Domini convent in Ferrara, drawing on an old recipe created by the great Renaissance cook Cristoforo da Messisbugo, created a cake to send to the great personages of the age. Cocoa had only recently arrived in Europe, thanks to Cortes. It was expensive, a luxury commodity, reserved only for the few and added as if a jewel, a precious powder. In the form of a small pumpkin, the dough enriched with fine almonds or hazelnuts and tasty candied fruit, flavoured with the most fragrant spices and all covered with plain chocolate, the rich cake was ready and became the “Pan del Papa” (Bread of the Pope). 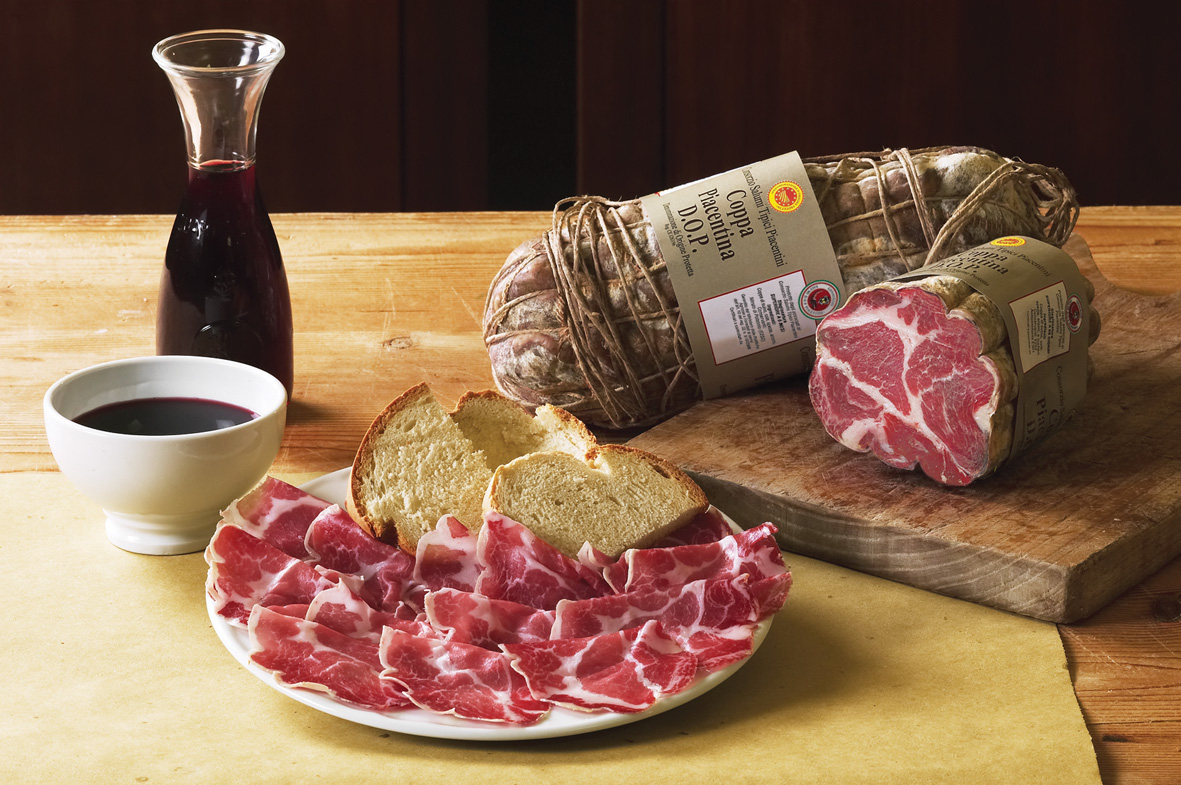 Coppa Piacentina is produced in the Arda Valley near Piacenza. It is made with a big, round cut of pork that runs from where the shoulder meets the neck to the fifth-sixth rib of the carré. Many years ago in the countryside, coppa was actually used as a sort of bonus: landowners would offer sliced of coppa to their workers to encourage them to work more.
Coppa Piacentina became a DOP (Protected Denomination of Origin) product in 1996 and can be made exclusively in the area of the province of Piacenza less then 3,000 ft above sea level. The most important places for aging the meat are Pianello Val Tidone, Bettola, Carpaneto Piacentino, Gragnano Trebbiense and Lugagnano Val d’Arda. 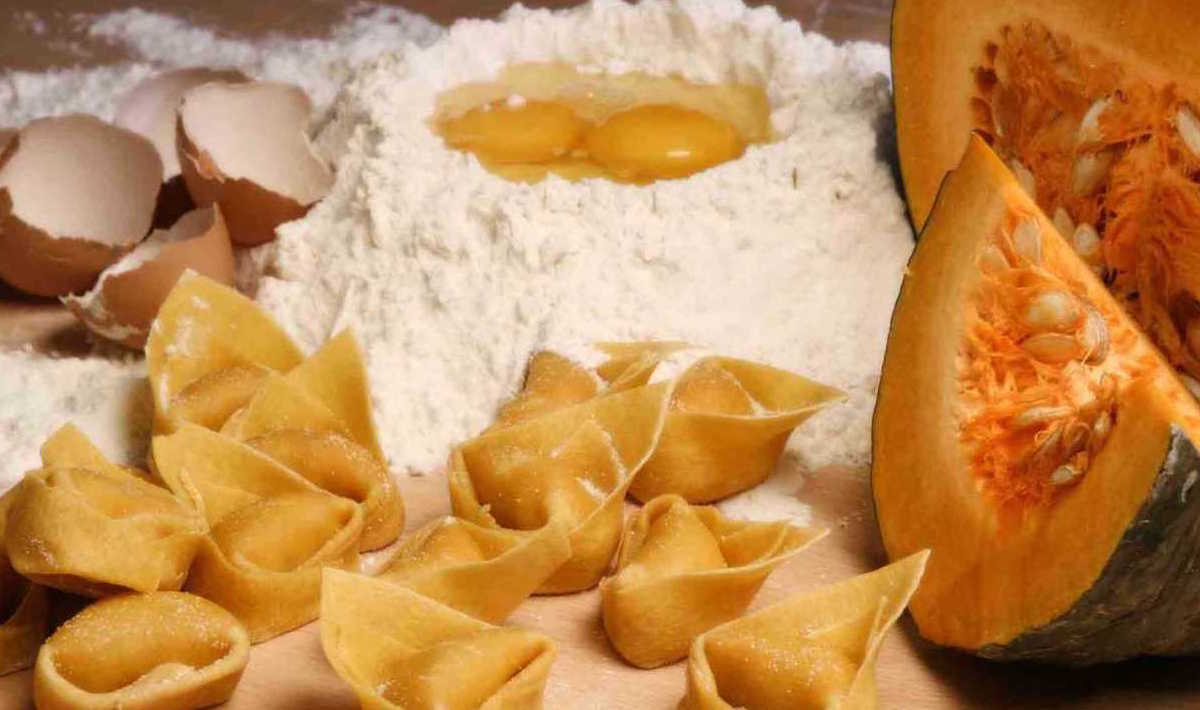 The Cappellacci (know as “caplaz”  in the local dialect) were referred to as “tortelli di zucca con il butirro” or pumpkin tortelli with butter. The ingredients today are exactly the same as all that time ago except perhaps for the fact that cooks used to add spices like ginger or pepper that were in common use at that time but are not so popular nowadays.
Tradition would have it that the word in dialect (caplaz) comes from their vague resemblance to the shape of straw hats worn by local peasants. 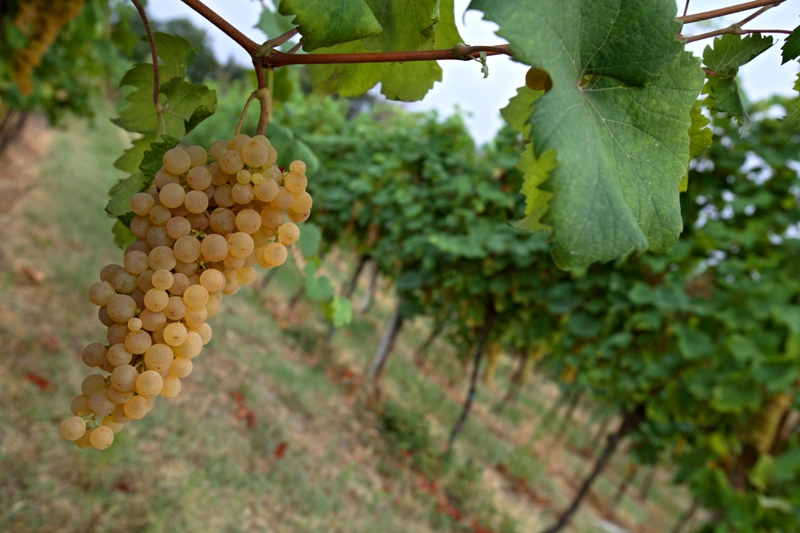 Albana di Romagna is a white, still Italian wine based principally on the Albana grape variety produced in Bologna, Forlì-Cesena and Ravenna.
There is much history and legend associated with the Albana di Romagna area. One story from 435 AD concerns the daughter of Roman Emperor Theodosius II. She arrived in a small village on a white donkey, and the villagers were so overcome with her beauty that they offered her some of the area’s sweet and excellent wine (Albana) from a simple terra cotta jug. Completely enamored of this delicious, unctuous nectar, Galla Placida exclaimed, “You should not drink this wine in such a humble container. Rather it should be drunk in gold (berti in oro) to render homage to its smoothness.” From that day on, the village was called Bertinoro and the wine was drunk from refined goblets at the court of Ravenna.