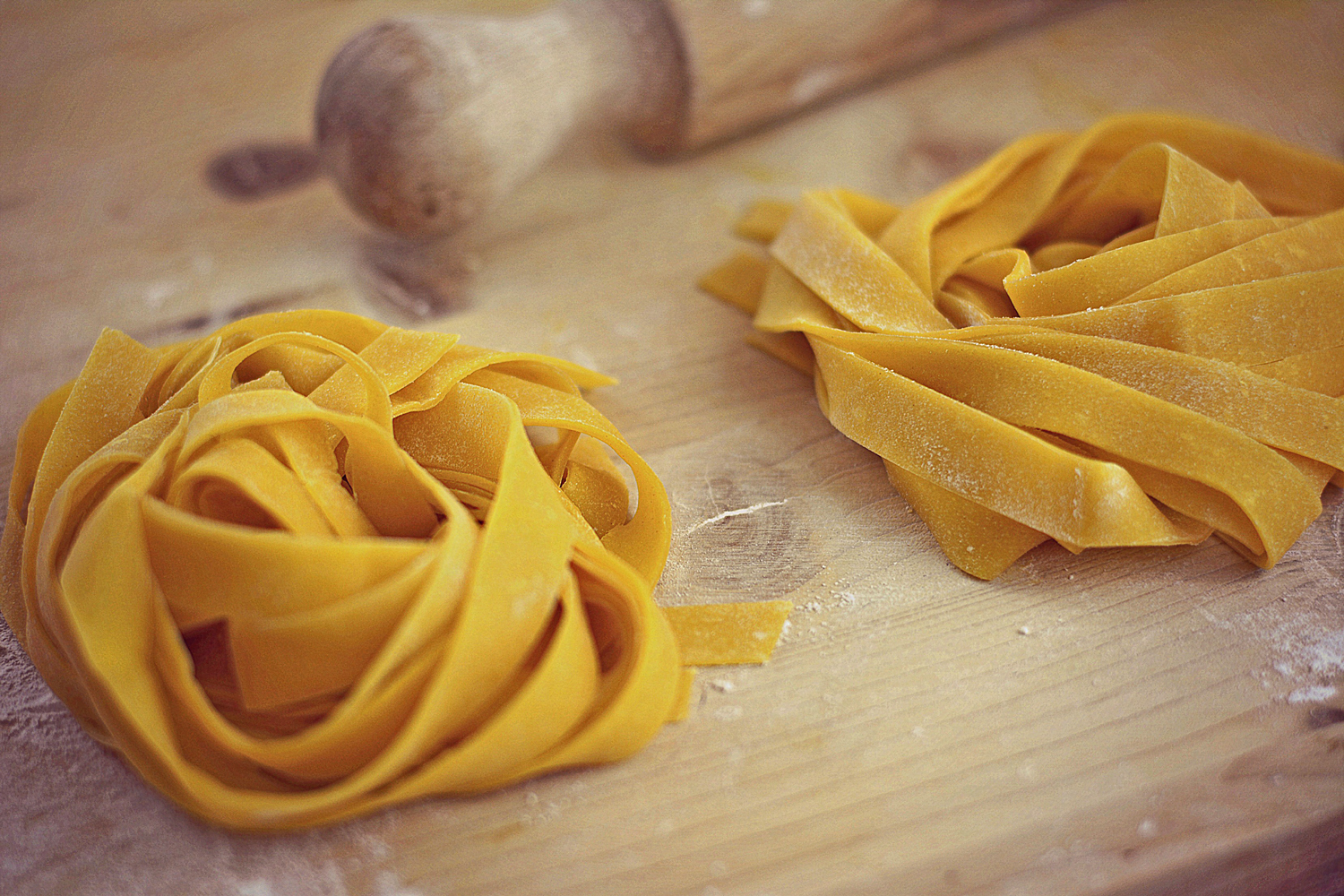 Tagliatelle: a pasta that made Emilia Romagna’s history

I think it’s rare, if not impossible, to find someone who doesn’t like tagliatelle. And if it happens that I’ll find someone, somewhere, who dislikes them, be sure I would look at him suspiciously and skeptically. These strips of golden egg-dough, traditionally served with ragù can be easily defined as one of the landmarks of Italian food.

From North to South, every region in our country has its own version: Just think about the ‘fettuccine’ in Lazio or the ‘Tajarin’ of Piedmont. Their first and foremost land, though, remains Bologna and all its surrounding territory, for the reasons I’m about to tell you.

Easy to prepare and amazing to taste, as the major part of the dishes of our culinary tradition: tagliatelle might date back to the ancient Roman times, and maybe even earlier, back to the Etruscan or Greek times.

Poet Horace talked about ‘lagane’ with chickpeas already in 35 BC: they seemed to be a sort of wide stripes cut out from wheat dough, very similar to the current lasagna. This makes us think that even tagliatelle were quite widespread, declined in different shapes and recipes according to the different territory of the Empire.

Between the end of the 19th century and the beginning of the 20th century, it was Artusi to finally define the identity of tagliatelle. According to the food expert of Forlimpopoli, before then, the term used to define them was masculine, even though he talked about a churchman of Romagna, Tommaso Garzoni, who preferred to use the noun in its feminine version.

What leaves a bit perplexed, anyway, is that Artusi, even if he talks about the Bologna cuisine with respect and reverence, never mentions the famous tagliatelle Bolognese (‘low bills and long tagliatelle, say the people of Bologna’). He also talks about tagliatelle ‘in the Romagna style’, but nothing more:  maybe, or probably, for an abusive parochialism towards his motherland.

In 1931, humorist Augusto Majani chimed in ‘about the tagliatelle affair’, trying to dignify the noble Bolognese origins of this famous egg pasta.

According to him, in 1487, Giovanni II of Bentivoglio, lord of Bologna, asked the court chef Mastro Zefirano to prepare a special recipe, on the occasion of the passage of Lucrezia Borgia, who was going to Ferrara for her wedding with Duke Alfonso d’Este.
To homage the beautiful golden hairs of the lady, he prepared a new type of pasta, cutting the traditional lasagna into long golden stripes, giving birth to the so-called tagliatelle.

It’s certain that the name ‘tagliatella’ comes from the verb ‘tagliare’, which in English is ‘to cut’. In order to stop all the strange lucubrations that were hovering around this type of pasta – including its many absurd variations such as the English ‘Spaghetti Bolognese’, the Bolognese representatives of the Italian Cuisine academy registered in 1972 the size of the real tagliatella at the Chamber of Commerce using a golden sample of tagliatella.

From then on, no one could have made any mistake (www.apostolidellatagliatella.it): the perfect measure of tagliatelle would have been a 12,270th part of the Asinelli Tower, which means 7 mm when raw (and about 8 mm once cooked). The thickness is traditionally accepted between 6 and 8 tenths of a millimeter.

Preparation:
On a wooden cutting board, shape the flour into a volcano with a large hole in the centre, then crack the eggs and pour them into the middle. Add a pinch of salt and then, using a fork, beat the eggs and mix the eggs in the flour a little at a time, until you obtain a homogeneous and consistent ball of dough.

Work the dough with your hands, adding from time to time if it feels too sticky until the mixture is smooth and elastic.

Once you’ve rolled out the dough into thin pasta sheets, make it rest for about 30 minutes. Roll it loosely over the rolling pin and then pull the rolling pin out. Then, with a sharp knife, cut the rolled pasta sheet into 7 mm large strips. Unravel very gently the strips and twirl into little nests. Finally, dust the nests with flour and place them on a tray to rest, ready to be put into boiling water and cooked.