“Europe was born out of pilgrimage, and its mother tongue is Christianity”
J.W. Goethe

The Francigena Way, also known as the Via Francesca or Via Romea, is an ancient pilgrimage route from north-western Europe to Rome (and on along the Appian Way and via the city of Brindisi to the Holy Land). Literally, the name Francigena referred, literally to the route’s origin in the land of the Franks. It did not consist of a single itinerary, but of a series of paths and roads that were intended to guide the pilgrims all the way to Rome.
In the Middle Ages, it was not easy to set out on a journey such as the one from France to Rome: there were territories and cultures to cross and it could take months before the city of Rome came into view.

Some pilgrims died along the way, others encountered bands of bandits, others were forced to deviate from the original route for political reasons. However, what drove the people of the time to undertake this long, dangerous and tiring journey was the desire to visit places that were particularly significant for Christians, i.e. sites made sacred by the presence of relics or because they were the sites of important historical events for the Catholic faith.
At the time, every good Christian was expected to do one of the “Peregrinationes Maiores” – pilgrimages to St Peter’s tomb in Rome, to Santiago de Compostela, or to Jerusalem – at least once in their life.

The first and most complete official document on the Francigena Way is a meticulous travelogue from the 10th century written by Bishop Sigeric, who was returning to Canterbury after an audience with the Pope. It is with this travel diary that the Francigena route was officially born, an itinerary travelled by large numbers of people, depending on the season of the year and the political climate. The constant stream of pilgrims allowed the different European cultures to communicate, forging the cultural, artistic and economic foundations of modern Europe.

Today, despite the more modern and fast communication routes, the Francigena Way continues to flourish as a means of communication and exchange between peoples and cultures. In 1994, it was declared a “Cultural Route of the Council of Europe”, with an established itinerary, confirming its international importance on par with the pilgrimage to Santiago.

In addition to being one of the most beautiful spiritual and naturalistic itineraries in the world, in the Emilia Romagna region the Via Francigena passes through the vicinity of some villages of great historical and spiritual value such as Berceto and Bobbio. The latter in particular was a place of great religious importance in the Middle Ages because of St Columban’s Abbey, founded in 614 by the Irish monk Columban, and it was one of the safe and sacred places along the road to St Peter’s tomb in Rome.

The Francigena’s official website offers all the information you need to plan your trip, including where to sleep, where to find cycle paths and details on how to get your official pilgrim’s “Credential” and “Testimonium” to attest that you have completed the route. You can also download a GPS file for each stage, the latest updates on the state of the route, and full details about local events.

The Francigena Way in Emilia-Romagna is usually divided into 6 stages covering a total of nearly 90 miles (the entire way from Canterbury to Rome spans some 1100 miles). It’s not to difficult, although some stages are quite long and water can be hard to come by.

If you plan to travel the Francigena Way, you can buy a guide and download the free App from the official website. 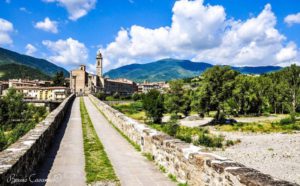 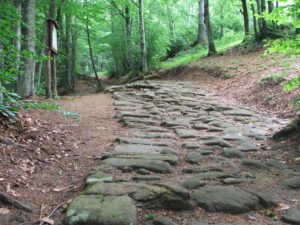 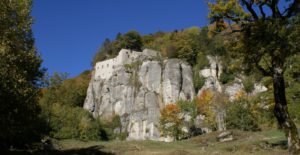