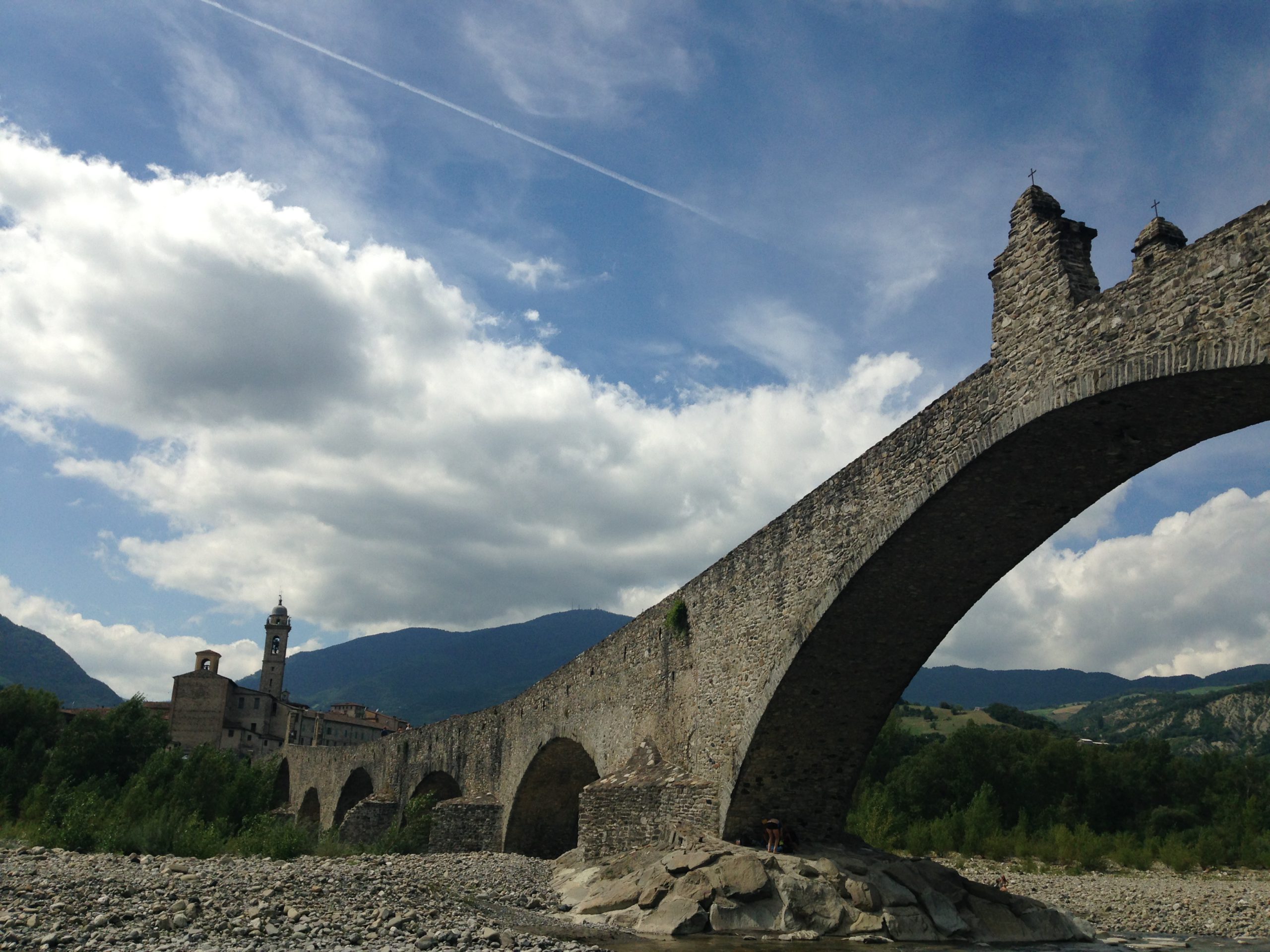 This small medieval town is a travellers’ delight, a feast of ancient legends and modern cinema in the heart of the High Val Trebbia, dubbed “the most beautiful valley in the world” by none other than Ernest Hemingway. The town has the cultural and natural qualities to merit membership of both the Association of the Most Beautiful Villages in Italy and the Orange Flag Association.

Bobbio’s origins are something of a mystery. Its history is closely intertwined with the famous St Columban’s Abbey and the legendary Devil’s Bridge. The town is squeezed between four regions, a haven for lovers of culture, nature and sport. In short, a little piece of magic. 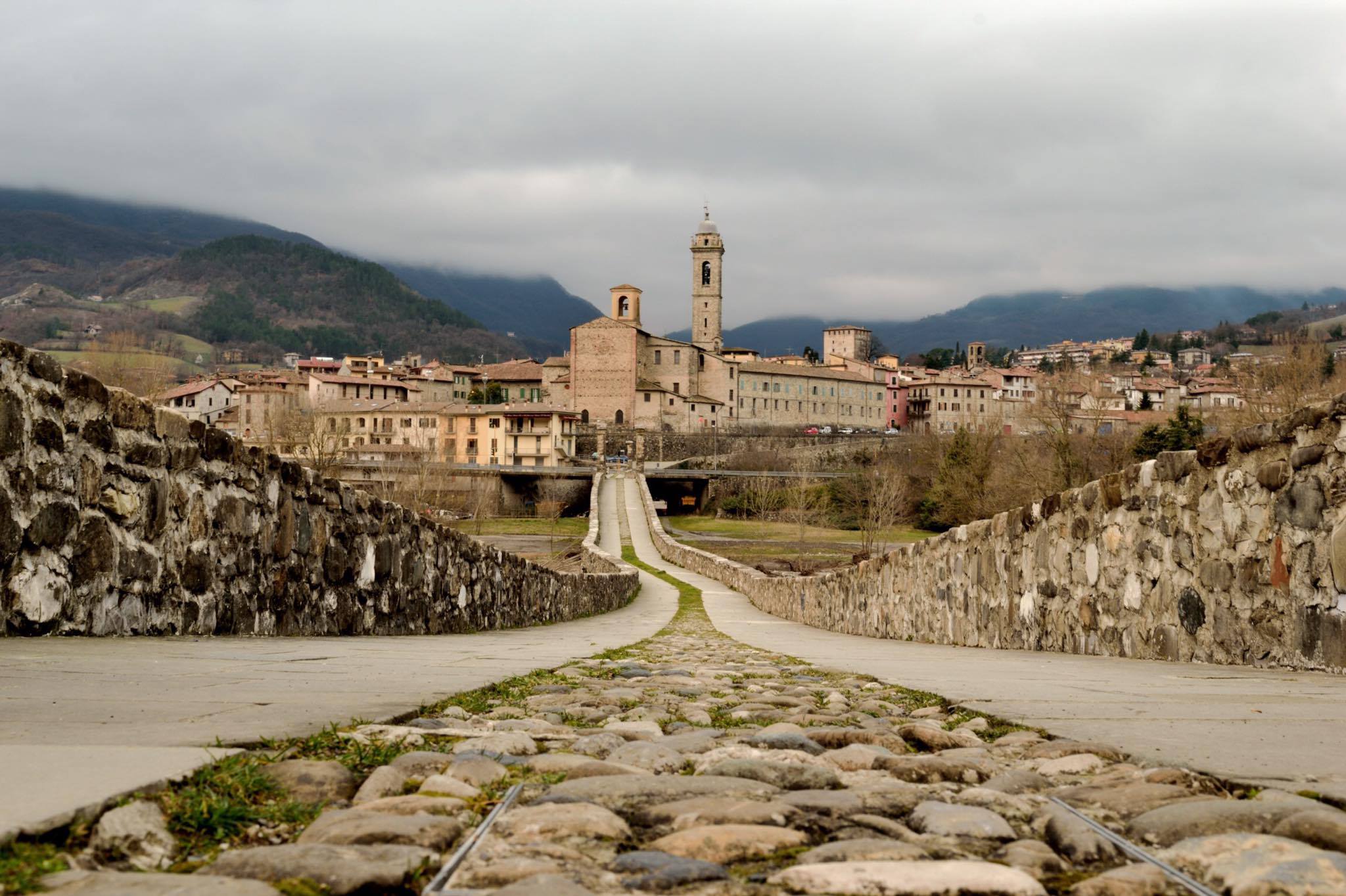 The town of Bobbio

Visiting Bobbio is like stepping back into the Middle Ages, to relive the prestige and splendour that this place once enjoyed. Through the faith and foresight of an Irish monk, St Columban, this remote corner of the Apennines became the pulsating heart of medieval religious culture in Europe. It was around the abbey, in fact, that the lop-sided town first grew. The abbey became a large monastic complex, a beacon of culture on a par with Montecassino; it houses the ancient scriptorium and the library that inspired Umberto Eco’s “The name of the rose”.

The most famous of the many legends surrounding Devil’s Bridge says that Satan built it in a single night, supporting it on the backs of his imps, in exchange for the soul of the first being that would cross it, only for St Columban to taunt him by sending across his faithful bear. The medieval town makes a beautiful setting for the annual Bobbio Film Festival; the arcades of Piazza Duomo are a great spot for a pre-movie coffee, and the cobbled streets are all laid out to explore afterwards. Having visited a few years ago during a weekend based in Brugnello, I can recommend it to anyone looking for a lovely spot for a short break from the daily grind.


The town’s name derives from “saltus Boielis”, the Latin version of the Celtic-Ligurian name (Boiel) for both nearby Mount Penice and the stream that comes gushing down from it. In the 4th century, the Romans established a strategic base here on the west bank of the River Trebbia to control the salt road to the Byzantine capital of Genoa along the Val Trebbia. In 614, the hermit monk Columban arrived from Ireland and founded a Benedictine monastery on the land he was given by Lombard King Agilulf and Queen Theodolinda. The monastery grew in importance, even obtaining its own diocese, until Napoleon suppressed it in 1803. The abbey was part of Pavia province until 1923, when it came under the control of Piacenza.


A natural starting point is the iconic Devil’s Bridge, one of the most interesting structures in the region. It may be Roman in origin, although it certainly existed in the Longobard period, for there were once salt pans and a furnace beyond it. Its 11 assorted arches marching across the River Trebbia are all made of stone with some refurbishments and baroque superstructures. While taking in the bridge’s eccentric lines, you can also admire the town and its setting from the far end.

Next, hop over to the place that made Bobbio’s name: the abbey. Founded by Benedictine monk St Columban, it was originally built where the castle now stands and was moved to its current site in the 9th century by Abbot Agilulf. The current basilica was built over the Proto-Romanesque one in the 15th and 16th centuries. The two most eye-catching features are St Columban’s tomb in the crypt and the original mosaic floor of Agilulf’s basilica, a real prayer carpet for the faithful, depicting biblical scenes and the months of the year. It is very much a place of deep peace. From Piazza San Colombano, head for the 14th-century Malaspina-Dal Verme castle, whose imposing square gatehouse dominates the town. Thence to the Bishop’s tower, a medieval relic.

Make sure you visit the town’s arcade-lined little hub, Piazza Duomo, and Santa Maria Assunta cathedral, whose façade dates back to 1463, while the two side towers are originals from 1075. The interior is in a mix of styles from the neo-Gothic-Byzantine of the aisles to the 14th-century frescoes. The Abbey Museum, on the site of the ancient scriptorium, immerses you in the worlds of the Romans, Longobards and Carolingians, with exhibits about both the monastery and the city.

The 13th-century Franciscan monastery with its 16th-century cloister, the Queen Theodolinda palace, Ocelli Mill, the 13th-century Palazzo Brugnatelli, and the ancient town of San Giuseppe with its stone buildings from the 1100s are all yours to explore. And don’t leave without visiting the Shrine of Our Lady of Aid, a baroque church with a nave added in 1640 to the original 15th-century structure.


Spring
– Walk at least the first stage of the Abbots’ Way.
– Visit the ​​Veleia Romana archaeological site or the Regional Park of Stirone and Piacenziano.
Summer
– Take a refreshing plunge into the clear waters of the River Trebbia and sunbathe on its many quiet little beaches.
– Explore the Upper Val Trebbia on foot, by bike, by raft or on horseback.
Autumn
– Go hunting for mushrooms, truffles and chestnuts, and enjoy the various festivals dedicated to them.
– Visit the Ethnographic Museum of the Trebbia Valley in Callegari and the valley’s castles.
Winter
– Penice Pass: The joys of a day in the snow can last well into the evening, courtesy of the excellent lighting system.
– Cross-country skiing on the 7.5-, 5-, 3- or 2-km trails in the resort of Vallette.


Bobbio Film Festival – See which film will win the Gobbo d’Oro prize at this prestigious event in the Abbey’s charming cloister.
The Snail festival and Christmas market, December – Enjoy the games and children’s entertainment; browse the lively stalls selling Christmas gifts along the streets; and try the famous Bobbio snails, a Christmas Eve speciality, in the restaurants.


In Val Trebbia, good traditional local food is always on the menu. Try the sausage appetizer with 3 PDO products (bacon, salami and coppa or pork neck), a trio of first courses in the form of Bobbio maccheroni, malfatti (small gnocchi baked with ricotta and chard) and pine nuts with ricotta, a brace of second courses with Bobbio snails and brachettone (a pork-shoulder salami served cooked with polenta or legumes). All washed down with one of the over 20 DOC Colli Piacentini wines, naturally. And the almond brittle baskets for afters are quite something, too. Browsing among the old town’s shops, you’ll find an array of local salami, truffles and porcini mushrooms to take home.


St Columban – The Abbey founder was recently made a saint by Pope Benedict XVI. Columban was a true European, acknowledging the continent’s cultural unity by coining the phrase “throughout Europe”, in Latin “totius Europae”. He is also the patron saint of motorcyclists, and bikers are indeed frequent visitors to the town.
Marco Bellocchio – The artist from Piacenza was one of Italy’s most renowned filmmakers and film producers. He created the Farecinema lab in 1995, which by 2005 had developed into the Bobbio Film Festival.


The first stage in Emilia-Romagna of the Abbots’ Way begins in Bobbio. 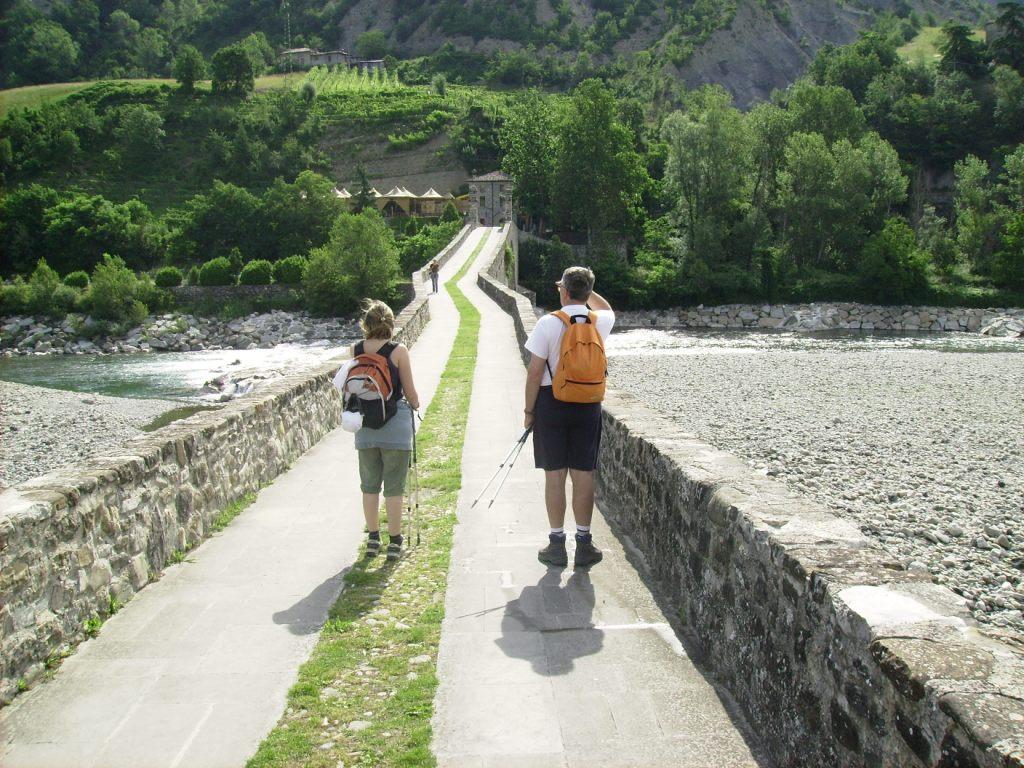 Pilgrims along the Via Francigena – Bobbio

This article has 7 comments