If we say Bologna, what is the first thing that comes to your mind?
Of course, the University. Of course, tortellini. But one of the first images that appear to most people closing their eyes are the Two Towers, one of the symbols of the city, which stand out right in the heart of its historic center, along the ancient Via Emilia, which in this stretch takes the name of Via Rizzoli.

But perhaps not everyone knows that there are more than two towers in Bologna!
In medieval times there were up to 100; today just 28 have survived, including 4 torresotti, 2 bell towers (San Pietro and Arengo), several tower-houses and 9 real towers, among which the famous Two Towers, called Torre degli Asinelli and Torre Garisenda.

In all probability, the construction of this high number of towers in the low-medieval period is linked to the supremacy of the power of the rich families of the city: we’re in the period of struggle for pro-imperial and pro-papal investitures and the consequent opposition between Guelphs and Ghibellines, whose opposite factions – which in Bologna took their name from the Geremei and Lambertazzi families – apparently used the towers as an instrument of defense/offense and as a symbol of power and primacy over the other.

If you’re planning a visit to Bologna, here’s a brief guide to the towers of Bologna that you can still visit today.

Known for being the highest original medieval tower in Italy (97 meters), the Asinelli Tower has an overhang of 2.23 meters and an internal staircase of 498 steps.
The effort to climb to the top is undoubtedly rewarded by the view that you can enjoy, a 360° panorama over the city of Bologna, from the centre to the hills, also allowing you to admire the adjacent Garisenda tower from above, which is “only” 47 meters high.
The construction of the Asinelli Tower is linked to a legend, one of the many little-known stories related to the city.

Located in Piazzetta Prendiparte, the Prendiparte Tower is 59.5 meters high and was built around 1150 by the very rich family of the same name.
The tower, from which you can enjoy a spectacular view of the historic centre and the Due Torri as well, is also known as the Coronata (crowned) Tower, due to the “crown” shaped indentation placed near to its top, at 50 meters high .

It is not open regularly to the public, but it is possible to visit it during the “Towers Tour” or the many events organized by the property.

The tower also houses a B&B that could be unique in the world: if you have always wanted to feel “noble for a day”, spending a night in an ancient tower reserved just for you and your better half, this is undoubtedly the ideal place!

It is actually composed by two towers built at different times (X and XIII century), one inside the other.
The belfry houses the largest bell that can be played “alla bolognese” (in a timed manner and with a complete rotation of the bell); think that this bell alone weighs 33 quintals, while the whole bell complex weighs 65 quintals in total.

Even from the bell tower you can enjoy an evocative panoramic view of the city center and the hills.

Also known as the Accursi tower, the Clock Tower rises to the left of the Palazzo Comunale di Bologna, the medieval and oldest part of Palazzo d’Accursio.

It is the tower that for centuries has guided the city in marking its time; although several times adapted to the architectural styles that have followed one another over the centuries, the soul of the tower is the same that embellished the house of the Florentine glossator and jurist Accursio da Bagnolo in the thirteenth century.

The visit starts from the internal courtyard of Palazzo d’Accursio, following the audioguide directly from your smartphone; climbing the elegant “staircase of the horses” up to the second floor you enter the Tower, until you reach the beating heart of the tower: the mechanism that makes the clock work.
Finally, the view on Piazza Maggiore is not to be missed.
The same ticket also includes access to the Municipal Art Collections, housed in the rooms that were once used as the residence of the Cardinal Legates. 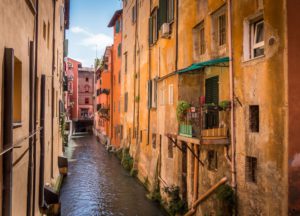