If you look Bologna from above, you would never imagine what the underground hides beyond the net of century-old buildings. Nonetheless, beyond the streets and piazzas of the city on which thousands of people walk, is a historical heritage whose value we can barely imagine.

Everything ended up to be buried by the inexorable passage of time. Something, though, is still visible, and you can discover it walking through the city centre, but, most of all, venturing into the underground city. 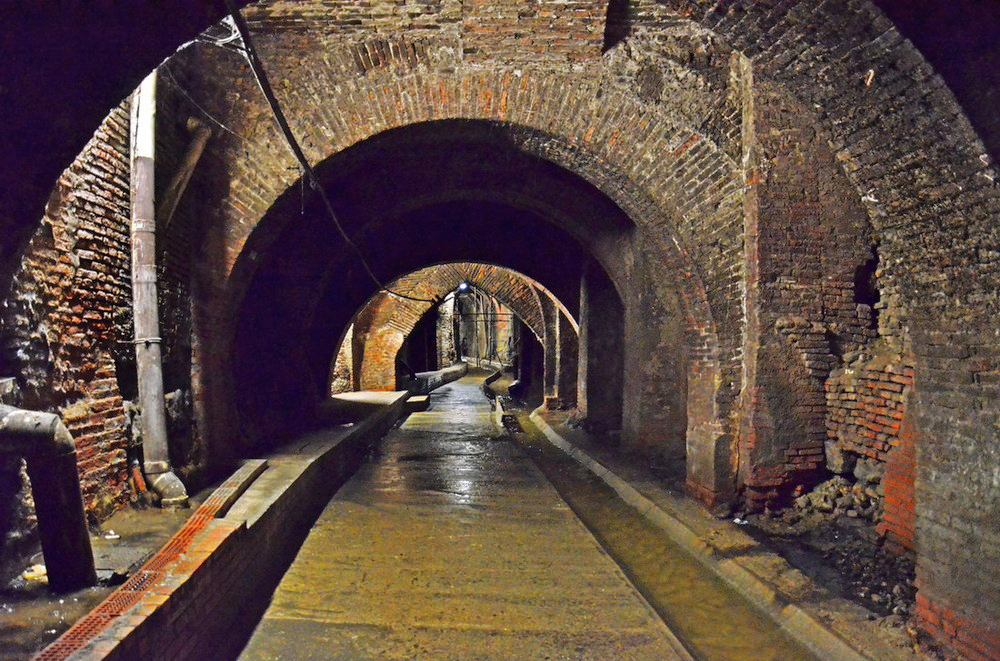 The itinerary is currently not viable

Etruscans and Celts managed to see it, Romans built over it. Today, the people of Bologna only know its name and they studied it at school, but very few of them did see it. The Torrente Aposa is the only natural stream of water of the old Etruscan capital and its story is enshrined underground, beyond the houses, as a result of the gradual burial process that had started at the end of the 15th century.

Before, the Torrente Aposa had marked the industrial and economic wealth of the city, together with the rivers Savena (1176) and Reno (1191), affecting the textile industry and becoming part and parcel of the city life. From the 16th century though, because of public health issues and in order to gain new building spaces, the channels and the river itself started to be covered by bridges and artificial coverings, until completely disappearing at the beginning of the 20th century.

Everyone knows that history is a repeating cycle though, and in fact, after all the efforts to cover the stream and to make its local geographical memory disappear, between 1997 and 2000 the reclaim works recovered the ancient course of the river, but the river itself was permanently bond to the underground city by the time. Today there are two entrances, one in Piazza Minghetti and another in Piazza San Martino; they lead to the underground river for an extremely fascinating and suggestive guided tour through the foundations of Bologna (visits are not allowed at the time).

Different styles and building techniques meet along the trail, as well as remains of the different historical periods the city witnessed. There are some ruins of the ancient walls dating back to the 4th century a.D., remains of a medieval washtub and, right at the same height of the Two Towers, but 8 m deeper, tracks of a Roman bridge intrados are still visible right in that point: they allowed the Via Emilia to run over the Torrente Aposa and to continue so its track outside the city.

The window of Via Piella 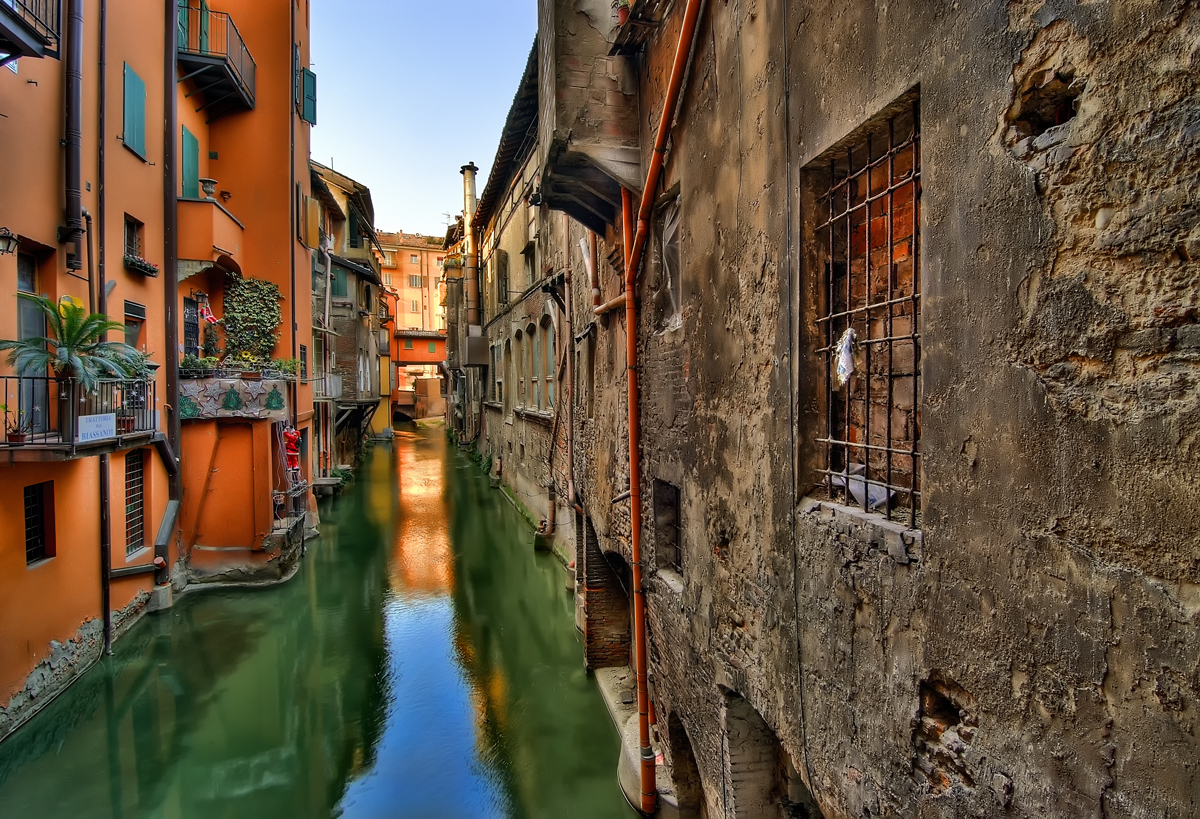 Not far away from the big axis in Via Indipendenza, the famous window of Via Piella faces a track of the Moline Channel, which miraculously escaped from the covering over of water streams of the period between the 1930s-50s. It is an open chapter on history that reminds us of how Bologna looked like during the Middle Ages and Renaissance: it was a city cut into two parts by streams of waters and canals. 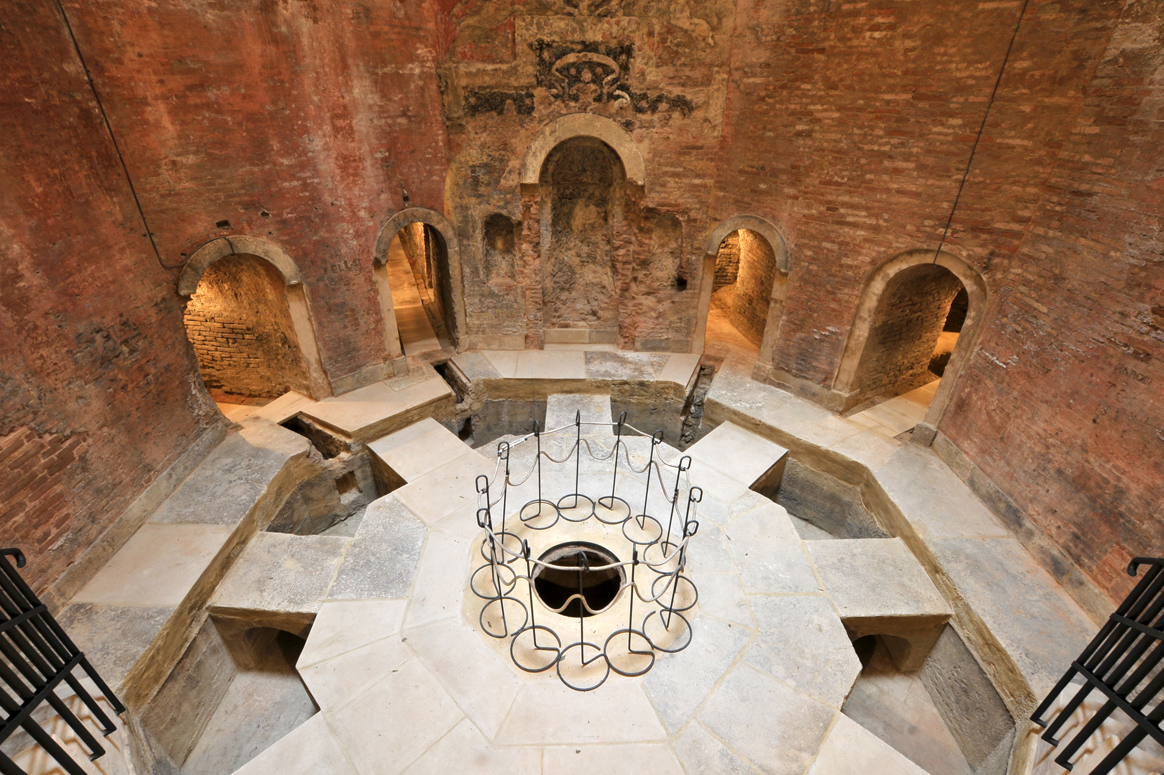 Our journey continues the city southwards, out of Porta Mamolo, in the narrow street Via Dei Bagni di Mario (in Italian the baths of Mario). Originally, it was mistaken for a spa, but in reality, it was built in 1563 by Tommaso Laureti with the only purpose of providing clean water for the spring of the Neptune, the artwork that the cardinal Donato Cerisi offered the city to celebrate the papacy of Pio IV de’ Medici (1499-1565).

Today you can see a big octagonal space made of bricks that were meant to gather the drained waters from four different galleries from the hills, with the aim of purifying the water through a settling system. A network of pipes allowed the water to flow until the base of Neptune.
This complex has recently been opened again (book your tour!) thanks to a restoration project that recovered its ancient splendour. 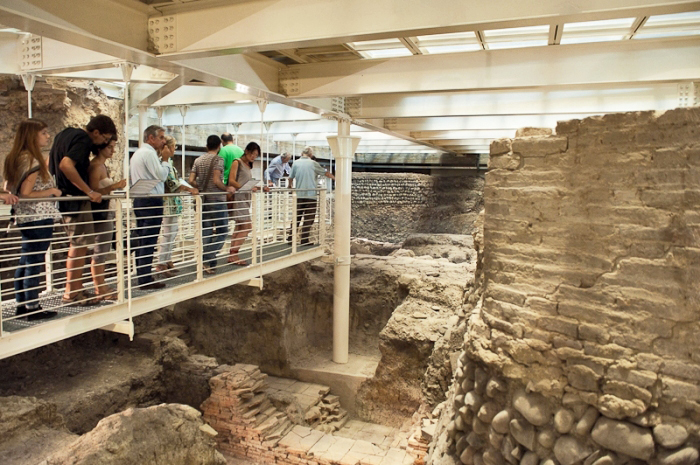 A glass floor divides the past from the present: we are in Sala Borsa, a room inside Palazzo d’Accursio; it was the historical seat of the Municipality of Bologna and today it is one of the most active and important library centres in Italy.
Underneath our feet, the history of the city emerges and pushes us to look more closely and to pay more attention. Every day, groups of visitors go down in the depths of the discovery of the thousands of years old stratifications of Bologna’s heart. It is a travel backward that catapults us into the 7th-century a.D.

Throughout history, Bologna flourished, putting one layer of civilization over another, life after life, culture after culture, and this brought Bologna to gather different architectures also in its underground city.
Among canals, old archaeological findings and buried rivers, a very important place is given to subterraneous structures linked to World War II that were gained from pre-existing elements: they are shelters, refuges, and storages dating back to the years between 1942 and 1944. Some famous shelters are Rifugio del Pincio (beyond the park La Montagnola), Rifugio of Villa Spada and the shelter beyond Giardino del Guasto in Via Delle Belle Arti.
To have an overview: www.amicidelleacque.org/rifugi-antiaerei/

For further information or to see the trails of the Bologna underground city open to the public, visit: