Everybody knows that Emilia Romagna is a region historically devoted to speed and to the production of racing cars and motorcycles.

All along the Via Emilia, the historic road that cuts throughout Emilia Romagna, it is possible to meet “motoring” places unique in the world, where the passion and the myth of speed take a shape. And it is always here that the engineering and motor skills have merged into one that has given life to the best motor brands in the world, the best mechanics and the best drivers.

After having told you about the museums and the great brands of MotorValley today we lead you discovering part of the many great private collections that surrounded the Official Brands Museums. About 20 private structures, in fact, collect and preserve part of the national automotive history, a great heritage that is available to all the curious and passionate.

So if it is true that it is in Emilia Romagna that most of the Italian automobile museums are located, if it is from these lands that the best talents come from the motor industry, it is always in this region that are found the most beautiful and complete collections of the history of Italian motoring.

The Mauro Pascoli Vespa Collection, inaugurated in Ravenna on 10 May 2008, is a collection mainly dedicated to a legend of two Italian wheels: The Vespa. A place where the most beautiful pieces are not museumized, but still maintain a relationship with the street, with the signs of the kilometers made and the scars of the past. With this collection, Mauro Pascoli managed to involve not only the family but also many Vespa enthusiasts who spontaneously offered the museum useful material for the setting.

Monday to Friday from 9.30am to 12.30pm and from 2.30pm to 6.00pm.
Monday and Friday only by appointment contacting the phone number +39 0544 502078.
Closed on holidays and during holiday periods reported on the site.
Reservations are recommended for groups. Free entry. 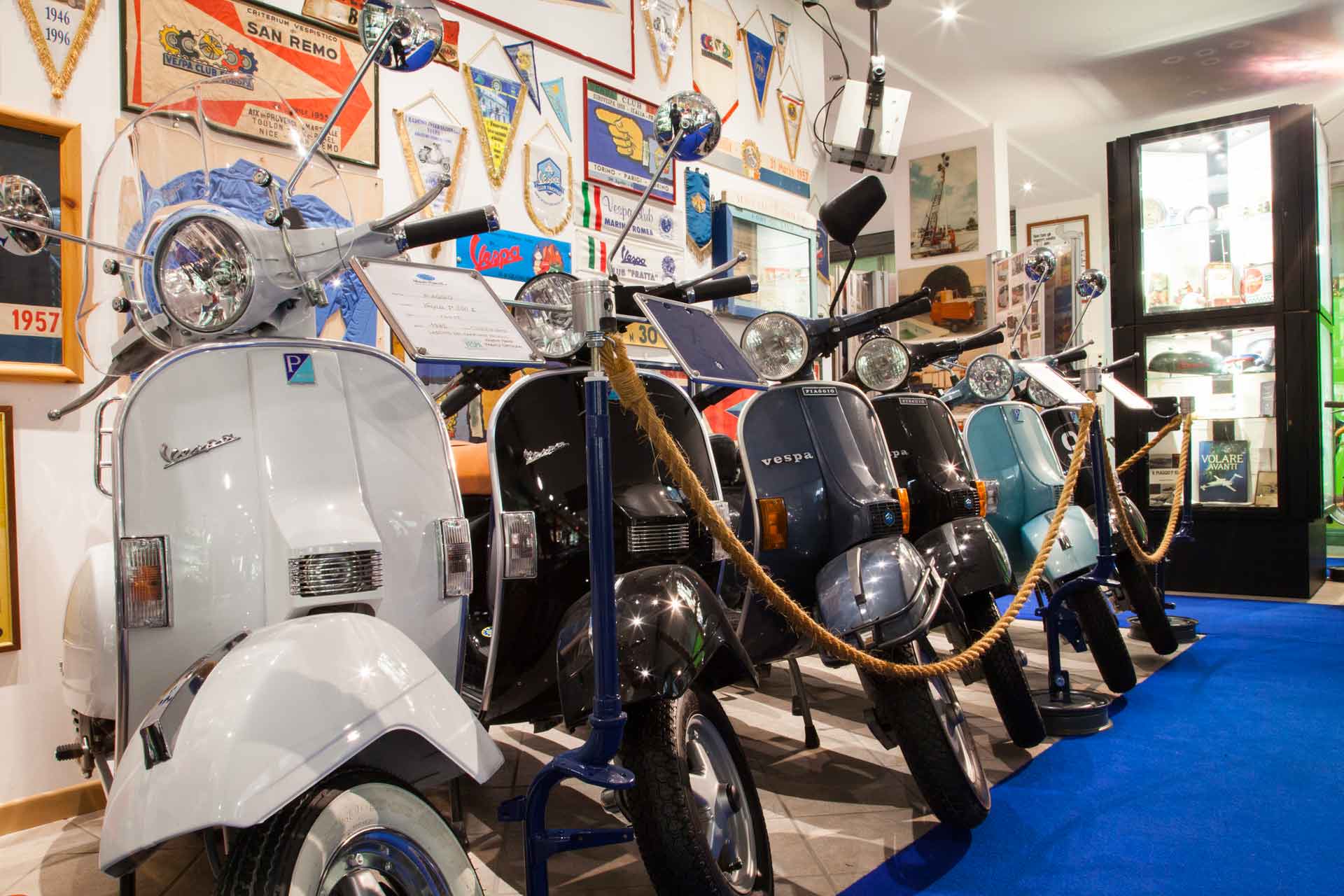 The National Motorcycle Museum finds its origins from the common passion for the motion of three friends: G. Corvatta, G. Savoretti and T. Zaghini; that in December 1993, by joining their private collections, they conceived and set up the first Motorcycle Museum open to the public in Italy.

The museum was created with the specific aim of dealing with the subject of the “Motociclo” from its origins to the present day.

Inside, visitors and cycling enthusiasts will find around 250 specimens belonging to 55 different brands, arranged chronologically according to the history of this fantastic two-wheeled vehicle.

The Museum is located in the Rimini countryside – Casalecchio Street 58 / N and has huge open spaces for events and clubs, groups and associations.

Winter
(November-April) Open only by reservation for at least 10 people.

The Pollini Collection can be visited as if it were a real journey into the costumes and history of our country from the 50s to the early 2000s and the cars that marked those years.

The Bolognese Giovanni Pollini has managed to build over time a rich collection of model cars, brochures, specialized magazines, vintage drawings and other objects that gravitate around the car world. There are also plenty of car models, made available by various collectors depending on the topics covered in the guided tours.

The Pollini collection is located in Via Guido Rossa 7, close to the Autocarrozzeria 3T in Casalecchio di Reno BO. 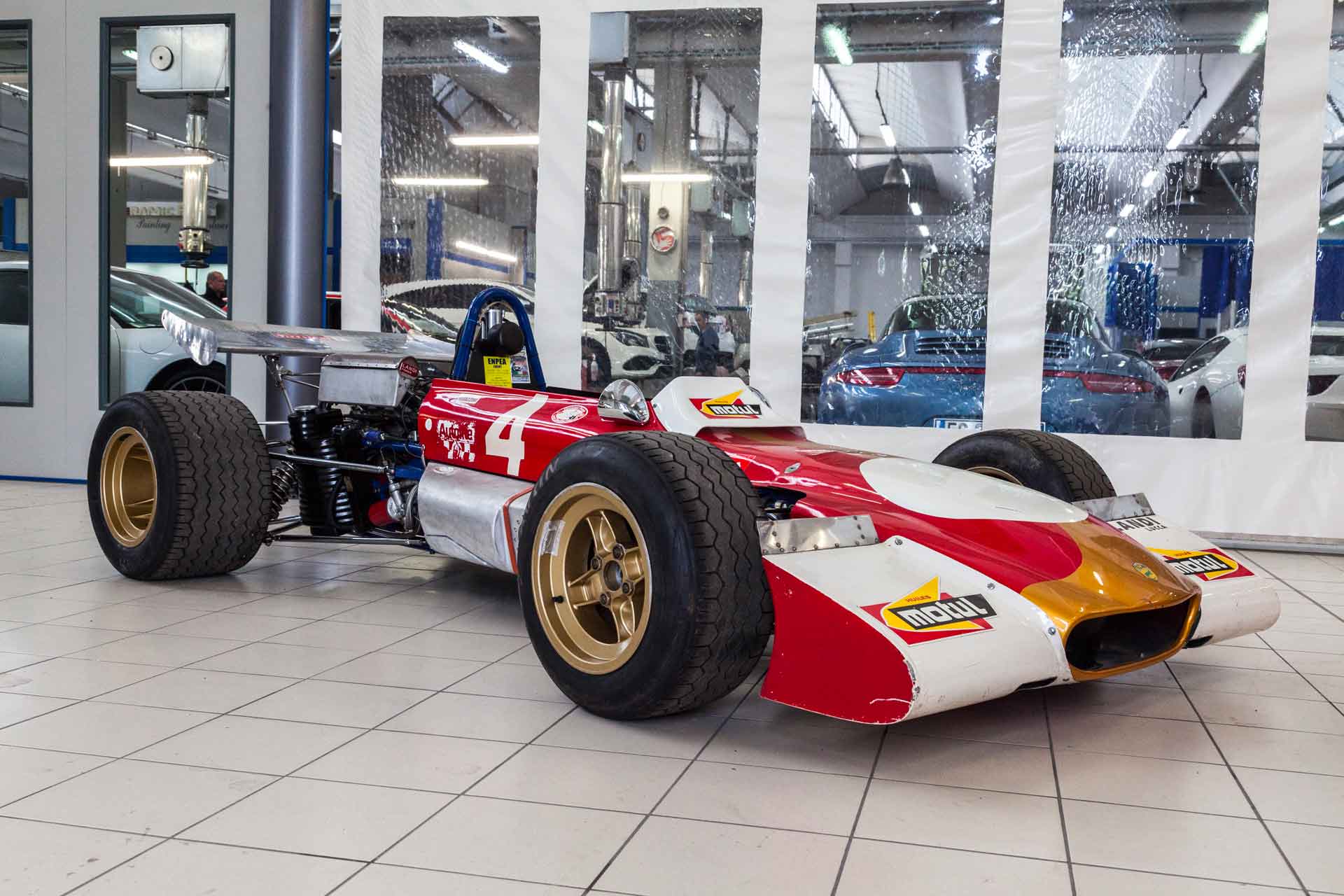 DEMM was an Italian metalworking and motorcycle industry active from 1919 to 1988 and that for part of its history was located in Porretta Terme, Bologna.

The DEMM museum, established in May 2005, was created thanks to the passion and stubbornness of Mazzini Mosè and his father Giuliano, at the time mechanical engineer of DEMM, who brought back to the old splendor many examples of the company’s motorcycle production.

Inside the Museum you can visit, in addition to the models of the 60s, the real rarity such as the notorious “torpedo” that won in 1956, 24 world records on the Monza circuit and other sports bikes that allowed the DEMM to excel in the Italian mountain championships in the years 1961, 1962 and 1963.

The DEMM museum is the result of the research, the recovery, the restoration, and the enhancement of documents made by the Mazzini Family, which also manages the structure.

The DEMM museum is located in Mazzini Street, 230 / A in Porretta Terme – BO

Visits to the Collection are possible only by appointment by calling +39 320 0533370 or writing to the mail address mos.mazzini@libero.it

The Scortichino Museum in Bondeno, Ferrara, is a private museum that collects Italian and foreign motorcycles from the 50s until the 90s, with models for competition, cross-country, trial, tourism, as well as everyday models such as Vespa or Lambretta. The museum project envisages a continuous renewal of the vehicle fleet with the periodic addition of new historical elements restored and/or preserved.

The Emilio Bariaschi Motorcycle Museum in Guastalla, Reggio Emilia, preserves motorcycles produced between the end of the Second World War and 1965. Because of its historical characterization, the Museum is a sort of time machine that tells the roaring years of motorcycling in Italy and the first economic boom, a period in which Italian companies like Gilera, Moto Guzzi and MV have imposed themselves and have become famous all over the world.

The Museum is located in Via San Giuseppe, 16 / A in Guastalla (RE), about 30 km from Parma, Reggio Emilia, and Mantua.

In fact, in 1996 Umberto Panini decided to buy about 19 cars belonging to the official Maserati brand collection and to exhibit them in his private facility. The lovers will find themselves in front of the most historic models of the Trident house from 1926 onwards, treated with loving care by the Panini family and handed down from generation to generation by Umberto to his son Matteo.

In this private museum, there are also many vintage motorcycles, most of which are produced in Emilia-Romagna, collectible bicycles and military vehicles.

The collection is located in Modena, Via Corletto Sud n° 320 and can be visited only by written request in the months of March, April, May, June, July, September, and October. 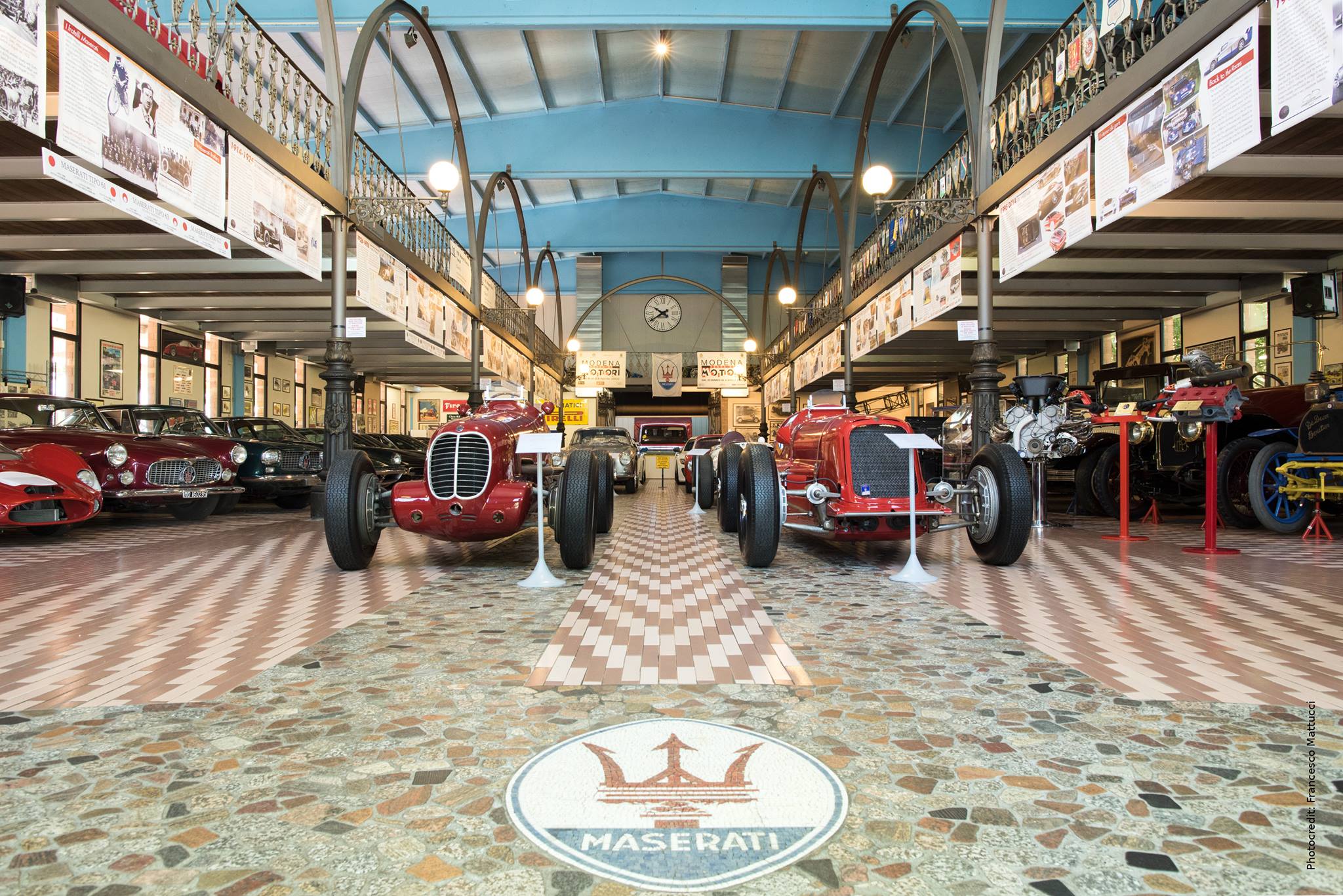 The first structure of Scuderia San Martino Museum can be traced back to the 50s when some wealthy inhabitants of the country of Reggio Emilia (including Giulio Campari, then owner of the famous beverage company) began collecting the cars of the time. Since that time the Museum of San Martino in Rio has grown in size and today has an exhibition area of 650 square meters, where there are about forty cars.

The Museum is part of various cultural circuits and together with the Scuderia San Martino, the race department, it is a member of ASI and shares its status in the recognition of international motoring culture.

Over 300 motorcycles, with vintage pieces, and some unique cases that tell the story of the Bologna motorcycling, here is the substance of the Bruno Nigelli Collection that, with its over 80 manufacturers and Brands, has created a unique reality in the world.

The Museum is completed with a collection of “horns” of every age, from the trumpets of Laurel and Hardy films to the marine sirens up to the modern pneumatic horns and a collection of about 250 Italian and foreign motorcycle engines.

The private Museum of Mario Sassi is a collection of historical motorcycles and other objects of Ducati brand from its origins (1926) to the 90s: from the first high-tech products such as radios, cameras and mechanical calculators to the prestigious motorcycles of the company.

Old Racing Spare Parts is set up as a unique collection, featuring all the most important Ducati models that have made the history of motorcycling: from the single-cylinder Desmo to the 750 GT-S, from the 750 SS to the 900 SS and MHR 900-1000. Also on display is a Laverda 750 along with other very rare models.

The private collection of Mario Sassi is located in Casalgrande of Reggio Emilia, Via Statale 11 / J. 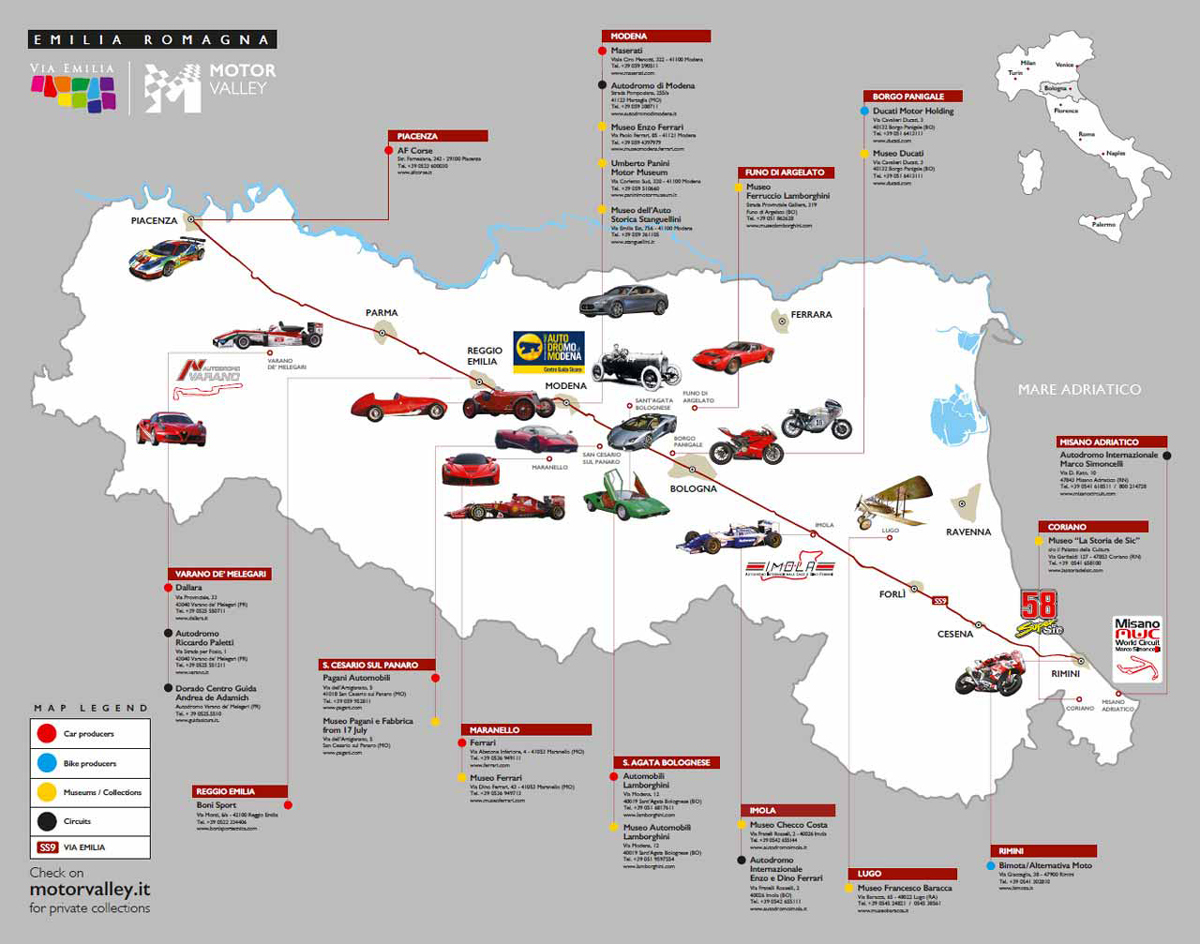