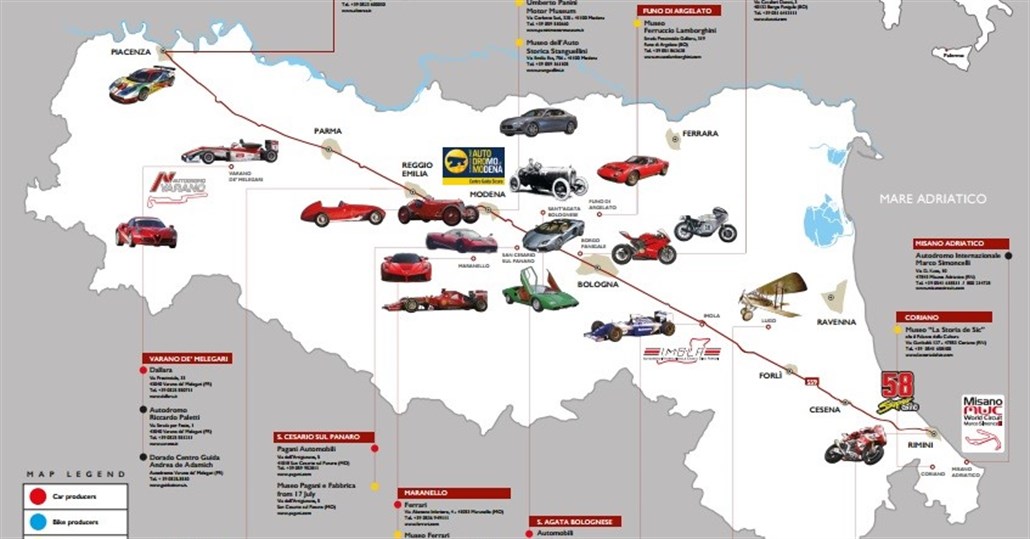 Ferrari, Lamborghini, Pagani, De Tomaso, Bugatti are some of the most known Car Brands that made Modena famous all around the world.

It is in Modena that some of the most popular automotive industries in the world have their headquarters, in this unique land that has been able to combine and mix technical know-how, Italian creativity, and environmental conditions, creating cars that are still a recognizable symbol of style, luxury and speed.

A piece of land that can be visited in a couple of days and where the best of sports cars and Italian Supercars are made. A journey inside a territory, mainly in the Modena area, where you can experience the speed and Italian design, without forgetting the excellent culinary culture of the area.

But let’s start the journey through the Emilia-Romagna’s Motor Valley, the land where speed was born.

The first stop of our itinerary is Maranello, the historic headquarters of Ferrari and home to both the Ferrari factory, the Racing Team and the Museum of the brand: a place to visit for any enthusiast.

The Ferrari Museum collects and preserves the history of the brand and consists of a permanent section and a temporary exhibition area. The Museum was conceived as a sensorial experience, in which, in addition to admiring the extraordinary cars that are part of the brand’s history, you can listen to the sounds of the various Ferrari engines, make a real Formula 1 pit-stop, and drive a Ferrari Racing thanks to a driving simulator, very similar to those where pro pilots are trained.

If you intend to do the full tour, we suggest you to buy the combined ticket for the Ferrari Museum and the Casa Enzo Ferrari Museum which at a discounted price will give you the opportunity to visit the brand new and futuristic Museo Casa Enzo Ferrari in Modena.
The experience ends with the possibility of making a shuttle ride in the Ferrari factory and on the Fiorano circuit.

We also recommend to all the fans to visit the many car rentals that are located around the museum which, with low fares, offer the possibility of driving a real Ferrari through the winding roads around Maranello, the same in which cars and prototypes are tested.

The Panini Collection: the real history of Maserati

On the road from Maranello to Modena, there is a place that combines the best of local culinary culture with the history of Italian motoring. In fact, in Colretto there is the Fattoria Hombre that joins together a cheese factory producing the renowned Parmigiano Reggiano with one of the most interesting automotive collections in the whole province of Modena: the Maserati collection by Umberto Panini.

Do not let appearences fool you: even if it looks like a farm, here you are in front of the Official Maserati Collection purchased by the Panini Family before the historic brand was brought back in vogue from the collaboration with the FCA brand.

It is a fundamental stop for all fans of Italian Supercars: through the visit you can discover how D.O.P organic Parmigiano Reggiano is made and also admire the Umberto Panini Car Collection.

It is impossible to plan an itinerary within Emilia Romagna’s Motor Valley without thinking to stop and enjoy the beauties and the cuisine of Modena.
Among the most renowned in Emilia Romagna, the Modena cuisine offers many of the most famous products of Emilia Romagna: Balsamic Vinegar, Lambrusco, Parmigiano Reggiano, Tortellini.

We suggest you stop in the beautiful historical center of the city of Modena, especially in the square from which you can see the Modena Cathedral and the Ghirlandina tower, the symbol of the city.
From there you can go for a stroll in the center, with its narrow streets and the typical porticoes adorning many of the towns of Emilia Romagna. Not far from the central square is the historic Albinelli Market, with stands selling the best products of the area.

The Albinelli Market, in addition to the beauty of its interior spaces, is also a good representation of Italian culinary habits, offering the possibility to shop and choose local products directly from the stands of the market.

In this place in the center of Modena, there are two distinct and complementary realities: the old Officina Meccanica Alfredo Ferrari, the architectural focal point of the entire museum area hosting the Ferrari engine collection, and the new exhibition gallery, the now famous aluminum “yellow bonnet” which surrounds the Officina. It is a futuristic building of about 5,000 thousand square meters, designed by architect Jan Kaplicky. On the inside, its shape recalls that of a car engine.

For all those who, after having seen the Ferrari museums, have the desire to try on a real circuit, we point out the agrreement that allows you to access the Modena Circuit with your own vehicle  and drive for 15 minutes with a discounted rate of only 35 euros.

A few hundred meters from the Enzo Ferrari Museum in Modena, you can find the headquarters of another major automotive brand of the Emilia-Romagna’s Motor Valley: the Maserati.

This brand has moved to the headquarters of Viale Ciro Menotti in Modena back in 1930, following the acquisition of the company by the Modena entrepreneur Adolfo Orsi.

The Maserati Showroom houses the cars currently in production, a modern car configurator, a historical diorama, and the “loop”, the semi-suspended ring designed by famous architect Ron Arad. In addition to the Showroom visit, it is possible to book a factory tour lasting approximately 1 hour and 30 minutes, including a visit to the Maserati GranCabrio and GranTurismo assembly line and the test and finish areas.

The tours cost 30 euros per person and are activated upon reaching a minimum of 4 participants, while they are free for customers that already possess a Maserati.

Next stop is the town of Castelfranco Emilia, the birthplace of  tortellini and of the Pagani automobile factory. This is where Horacio Pagani decided to set up his production of sports cars in the 90s, combining the culture and design of Emilia Romagna with the proud Argentinean character of its founder.

Pagani Automobili is pleased to receive visitors at its atelier in San Cesario Sul Panaro (Province of Modena) and offers guided tours of both the showroom and the production area. A unique, engaging experience that offers the opportunity to admire the cars produced by one of the most famous brands in the world and visit the setting where they are built.

A dozen kilometers to the north of Castelfranco Emilia is the town Sant’Agata Bolognese, the birthplace of Lamborghini Automobili, and home to the Official Museum of the brand (which was renovated in 2016 with an expansion of the pre-existing collection and the addition of new exhibitions).

The Museum is a small collection of some fo the most famous cars in the history of the brand: from historical models like Miura and Countach to the more recent ones like Huracán, Aventador, and the brand new SUV Urus.

The Ferruccio Lamborghini Museum was inaugurated in 2014 in the small village of Funo di Argelato, in the province of Bologna. It is the second of the Lamborghini museums in Emilia Romagna: while the Museum in Sant’Agata Bolognese represents the exhibition space of the brand, the Funo’s Museum is the space in which the Lamborghini family has collected the historical cars that belonged to Ferrucio Lamborghini.

Entirely redesigned by Tonino Lamborghini, son of Ferruccio, the Museum is today a great monument to the memory of the father of the brand, and it collects its most important mechanical creations along with the most significant photos of the family archive with the intent of enhancing and giving depth to the figure of Ferruccio.

The Lamborghini factories don’t only produce Super Cars, but also tractors, boat engines, Formula 1 cars, and even the prototype for a helicopter …

Going back towards Modena, the last stop is the village of Campogalliano, home of the famous Bugatti house.

Although Bugatti was a French brand in origin, in 1987 entrepreneur and financial expert Romano Artioli acquired the rights for the production of cars and, after evaluating the idea of ​​recreating the company in France, founded a new Italian company called Bugatti Automobili SpA with a factory in Campogalliano, specially designed by architect Giampaolo Benedini, and with the aim of attracting highly skilled workers from the Modena area.

Unfortunately, in 1995 the Bugatti Automobili declared bankruptcy: the financial difficulties forced Artioli to sell the industry and to abandon his dreams of glory. However, before that, he still managed to create a series of models such as the accessory version of the EB 110 and the legendary Lotus Elise (at that time the Bugatti brand was also the owner of the Lotus brand), named after Artioli’s daughter, Elisa.

Today the Blue factory, as it is called in jargon, is an extraordinary space of industrial archeology, essential destination for the brand lovers. It is entirely open to visitors thanks the old caretaker who today accompanies visitors, illustrating both the history and the spaces of the complex.