Luxury, innovative design and attention to detail have always been the attributes that identify the Supercars produced by Pagani Automobili. Features that are embodied in the new factory of 5800 square meters in San Cesario sul Panaro, between Modena and Bologna, a real atelier of a car designer and of which you can now visit showrooms, design offices, and assembly lines. From here, in fact, come out the futuristic monocoques made by titanium and carbon which populate the dreams of fans of the whole world.
A Factory placed in the middle of the MotorValley of Emilia Romagna, where Supercars and dreams come true.

The history of Pagani Automobili reflects the autobiography of its creator, Horacio Pagani, a man of Italian origins born and raise in Casilda, a small Argentine country, which immediately shows signs of a precise inclination: the passion for speed and car racing.

At the age of 12 the little Horacio begins to become interested in the first naval and aeronautical models, satisfying his passion by devouring piles of automotive magazines and then reproducing their sketches.
It was from one of these magazines that he learned the life of Juan Manuel Fangio, an undisputed idol of all the Argentines, who later met in person and who would have such a great influence in his future activities.

The young Horacio was not only fascinated by the great myths of Formula 1, but he also reads, studies, analyzes, draws, taking inspiration from new technicians and secret artists. And was right here, thanks to the book “Selection of Reader’s Digest”, that he discovers the genius of Leonardo da Vinci, who teaches how every object, every creation, must be beautiful and functional at the same time.

When he was 14-year-old he start, along with a friend, to build a motorbike starting from a second-hand engine he has had in gift and before the completion of the secondary school he is working on the construction of a Dune-Baggie from a bodywork kit in fiberglass fitted on the body of a Renault Deuphine. After five months of hard and patient work, the buggy was finally finished, vividly painted in a new and bright livery, registered and circulating like any other vehicle along the Casilda roads. 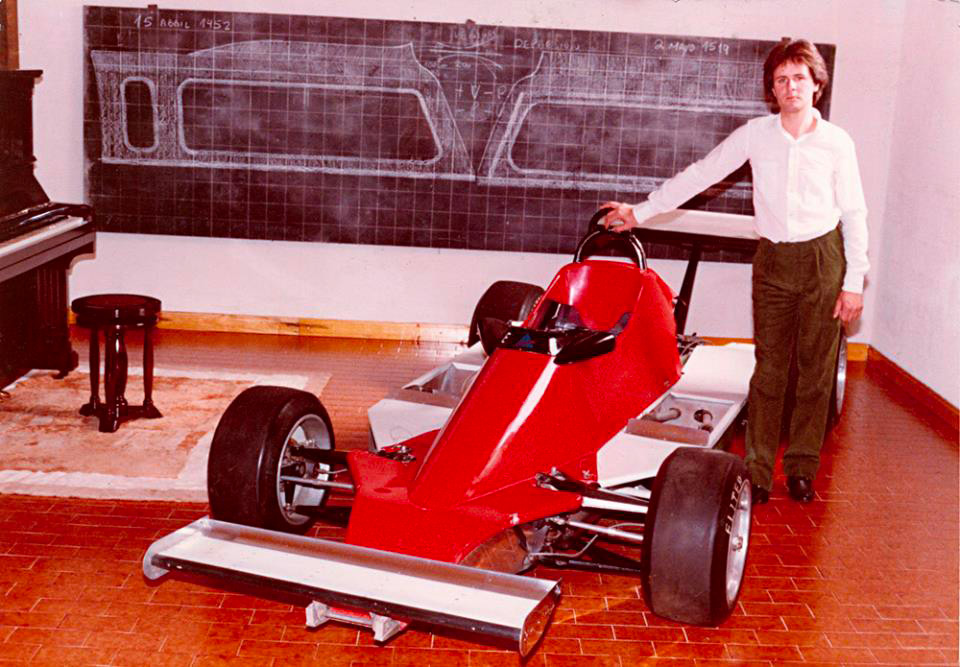 It is 1978, Horacio is 23 years old and has his own “factory”, a very small establishment, but here he can be free to build what he wants, realizing all the creations that his passion orders to his hands. Among the first creations Horacio Pagani makes camper and pick-up for freight, a great start for a young and unknown designer.

In 1979 he creates and built his first Formula 2 track, in 1982 he collaborated with the Research and Development Institute of the National University of Rosario building some prototypes and in the same year, he started his collaboration with one of the most famous sports brand of the all time, Lamborghini Automobili.

The encounter with the Lamborghini engineers was positive and the ideas of the young Argentine are well received by the Lamborghini team, above all the intuition of working with composite materials, which will lead to the creation of the Countach Evoluzione in 1985, a car which build the base for all future applications of carbon fiber and composite materials in the automotive industry.

The stalemate created by the warfare events of the First Gulf War and the international crisis convinced Pagani to leave the Lamborghini and to direct his research elsewhere. Since few of Horacio’s project works had seen light in the form of cars actually produced, he began to give life to his most ambitious dream: a supercar of his own which could summarize all the best design elements that appeared in previous projects. So in 1999, at the Geneva Motor Show, Horacio presented the Zonda C12 his first supercar born entirely from a self-financed project and with the stated goal of creating such an emotionally car that a customer would buy it without even thinking about it. 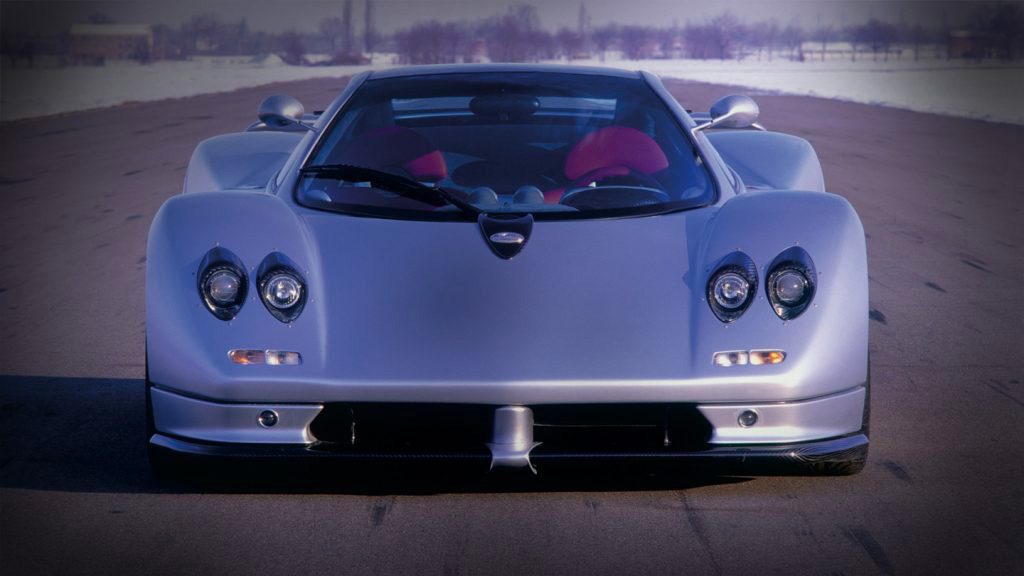 “The shape had to be sensual, the wheel arches should recall a woman’s bosoms, the rear bonnet the hips. Inside, the seats would be shaped like an inverted pyramid to wrap around the shoulders, giving a sense of power to the man, and protection to the woman. A complicated search of simple ideas. In a word: the Zonda.“

The Zonda C12 had sensual traits and combined the sinuousness of a woman with an aggressive line, expression of speed, technology, exasperation, and engineering.  The choice of propulsion was the consequence a single factor: Juan Manuel Fangio wanted an AMG Mercedes Engine, a V12 with twelve-cylinder which represented the history of cars worldwide.
The Zonda was the first road-car approved to be presented with carbon and will be the first, with the advent of the Zonda Cinque, to have a full titanium and carbon frame, Horacio’s faithful testimony which worked from years in the use of composite materials in the automotive.

The route along which Horacio Pagani would have met his passion and obsession with the sports cars had been traced, now it only mattered to go straight ahead. To the first Zonda follows the Zonda S, the enhanced car that featured a number of variations on the original project, the Roadster, a capless version, and the legendary Zonda F, a kind of philosophical sum of the ideas of Juan Manuel Fangio and Horacio Pagani.

Today Pagani Automobili is one of the most famous and sought after brands all over the world, its creations are halfway between art, craftsman knowledge, and highest technology. Huayra, the last born, is generally considered one of the most innovative, extreme and refined supercars in the world, capable of recalling ancient natural powers, as Horacio would say:

“Ancient Aymara legends tell us of Huayra Tata, god of the wind who commands the breezes, the winds and the snowstorms that invade the mountains, the cliffs and the hills of the Andean highlands.“

The Pagani Showroom is the exhibition space right next to the Car Factory, is characterized by the elegance and innovative design that make the 5800 square meters in San Cesario sul Panaro, Modena, and it is an ideal continuation of the suggestions of Horacio Pagani’s home. Made as a greenhouse, it seems that the inspiration for the project came to Horacio Pagani himself during a visit to the Chateau de la Grenerie, France when he saw a large greenhouse with large glass windows and Eiffel-style iron supports.

In this space, dedicated to both the exhibition and the construction lines, Pagani Factory wanted to recreate the typical Italian Piazza where, under the arches, it is possible to find the area dedicated to the special versions, the bodywork control, and the post-sale area. It is also possible to book personalized tours, admire the rare specimens produced and follow the production line of fantastic Pagani’s hyper-cars.
Pagani Automobili is obviously pleased to receive visitors at its atelier in San Cesario sul Panaro (Modena Province) and offers guided tour both in the showroom and in the production area for a duration of about 45 minutes.

Hoe to get there

Pagani Automobili S.P.A. is located in Via dell’Industria, 24, 41018 in Graziosa, Modena and it could be reached:

From Bologna take the road SS9 Via Emilia towards Modena, get to Castelfranco Emilia and take direction to Via dell’Industria in the hamlet of Graziosa.

Regional ticket available at Trenitalia
From Castelfranco Station, take bus 760 for Modena Bus Station and get off at Madonna degli Angeli. Continue on Via Emilia to Modena for about 20 minutes.

The Pagani Automobili Showroom can only be visited by reservation (duration of the tour about one hour) in the following opening hours: