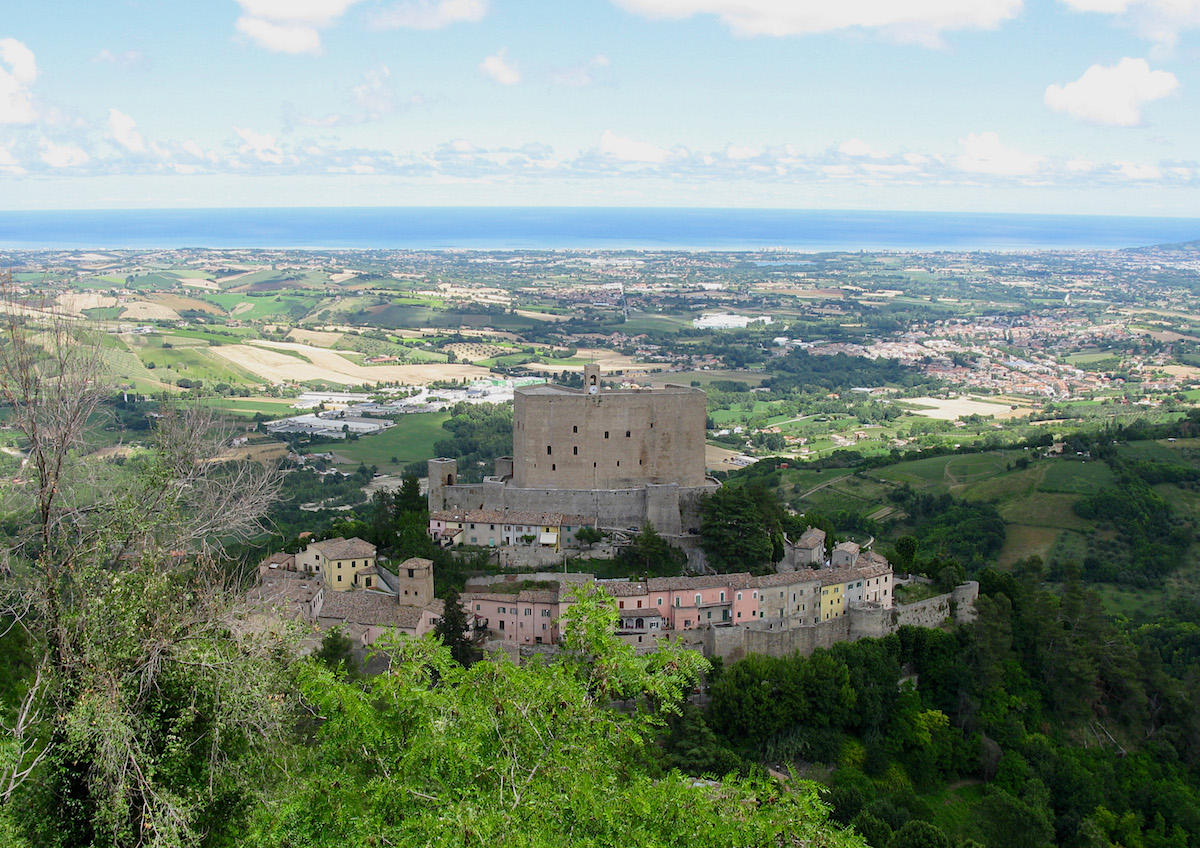 I’ve been living in Romagna for over 20 years, and despite all this time I have to admit that this land is still able to surprise me.

Each day it amazes me with a new trick, and like a magician pulling a rabbit from the cylinder, Romagna pulls out a place I don’t know, a gourmet product I was unaware of or a landscape I had never seen.

Recently, I accepted the offer of a friend of mine and went on a visit to the hinterland of Rimini, that I had already visited years ago but in a less accurate way.

He assured me that it would be a truly unique experience. After all, it would only take me a day.

We would have gone up and down the hills of Rimini to discover the CONCA RIVER VALLEY, an area full of history with villages, castles and suggestive landscapes.

On the phone, he also told me that the tour would pass by some of the best-preserved fortified villages in the entire region. Considering the premises, and that I hardly knew the area, the following day I reached my friend.

If you have never been to the Riminese hinterland, I suggest you seize the day and hop up and down the hills that characterise this portion of Romagna, and do that on the very first sunny day.

What I found was a landscape that I had not expected, something that reminded me of the perfect union of agriculture, flora and ancient settlements.

At the heart of it is the River Conca, a short stream of water that originates in the Marche (Mount Carpegna) and ends in the Adriatic Sea between Cattolica and Misano after 47km.

All around, gentle hills host villages, fortresses, and hamlets that between Middle Age and Renaissance were theatre of the fight between the House of Malatesta from Rimini and the House of Montefeltro from Urbino.

Here is the border that separates and distinguishes Emilia-Romagna from the Marche region, a border whose history will fascinate and amaze all history lovers with a passion for Middle Age, like me.

I met my friend in Rimini, we drove the “Adriatica” state street to the south and once in Cattolica we took Provinciale 17 street towards the hinterland.

With village San Giovanni in Marignano – once known as the “wheat belt of Malatesta” – at our back, we started climbing up the southern hills of the Conca valley towards SALUDECIO.

The nice village has a clear late – Middleage structure: a maze of alleys protected by walls and bastions with monumental doors.

Its elegant buildings, towers and squares are a hint as to why this place used to be the most important settlement of the Conca valley from ‘500 to ‘800.

An example of it is the vivid art itinerary that stretches on the walls of the houses, more than 40 artworks representing bizarre XIX Century inventions. Thanks to these ones Saludecio is also called the “city of the painted walls”, like Dozza, an another village in the province of Bologna.

Less than 5km away, two suggestive villages are eager to welcome the visitors: MONDAINO and MONTEGRIDOLFO.

Mondaino, despite its tiny dimensions, features a stunning view. It was founded by Etruscans and became a famous worship place under the Roman Empire, and today it enchants for its medieval charme.

During the Renaissance, it played a role of paramount political importance and was theatre of the peace treaties between Malatesta and Montefeltro in 1393 and 1459.

It is enclosed by great walls, and the city centre develops around Piazza Maggiore, a semi-circular square built in the XIX Century and origin of three small streets.

The imposing Rocca Malatestiana – seat of the local council – dominates the entrance to the village and from its highest point, the view over the Romagna, Montefeltro and Pesaro’s coastal area is stunning.

Talking with its inhabitants, we found out that in August the village hosts the Palio de lo Daino, four days of battles in medieval disguise.

In less than 4 minutes we reached Montegridolfo; in the list of villages I visited so far in Emilia Romagna, it surely reaches the top rank in terms of preservation – not accidentally, it figures within the circuit of the best villages in Italy.

The community is protected by high walls, and walking by its streets you have the impression of being in an open-air museum, with an extra view on the Adriatic coast.

On the way back to Mondaino, state street Provinciale 80 direction Tavoleto, after 5km we stopped in La Serra and a quick deviation led us to the ancient fortified village CERRETO.

It owes its fame of “fool’s village” to the legend of the weird and absurd behaviour of its citizens. The centre is deserted, not only didn’t we meet anybody but most of its houses seem somehow abandoned.

Following the state street Provinciale 80, we crossed the regional border and ended up in the Marche without being aware of it. Around us a hilly landscape covered with fruit trees, olive groves, woods, crop fields, and starred with villgaes, fortresses and castles.

In Tavoleto, we followed Via Casinella and reached MONTEFIORE CONCA, one of the nicest medieval villages in Italy and Orange flag of Touring Club.

Montefiore is the emblem of the medieval castle: a majestic structure on top of a hill with a double wall circuit, and a fortified village around it.

Erected by the will of the House of Malatesta as a demonstration of power above the valley, it was used as a holiday residence and for hunting purposes; it also hosted popes and emperors among others.

The streets of the village maintained their ancient medieval allure and setting. A pleasant itinerary, known as “Passeggiata di donna Costanza” (Walk of Lady Constance) stretches along the wall circuit.

Reaching the valley and following the directions for Taverna, we arrived further in MONTESCUDO and MONTE COLOMBO, that since 2016 are reunited in one single Council.

Montescudo is a marvellous terrace on the hills of the Conca valley, and thanks to its strategic position the Malatesta family elected it as its military base to patrol the territory.

The city center, delimited by walls, carries the traces of its glorious past: a wonderful tower with an intact 14th-century aspect, a rare example of ice-house close to the main square, a roof garden and several underground tunnels that once linked the castle with the sighting tower.

Approx. 1 km away, Monte Colombo shows the same features. The village preserved the architectural elements of the castle untouched, the door with the traditional Malatesta effigy and the outline of the fortified village.

The ancient wash house and its access street – paved in the Middle Age and still the best-preserved ruin of the village – are also worth a mention.

The territory abounds with historical signs of the past. We couldn’t visit them all – time is a hard master – but on our to-see list are: rural fortified village Albereto; post-war ruins of the medieval church in Trarivi; the castle of San Savino, a fortified village dating back to the XV Century, when the power of the House of Malatesta was diminishing.

The tiny Conca valley is a jewel of architectural and cultural gems, and in your cultural journey you couldn’t ask for more, could you?