A journey through the lands of Romagna through 8 Medieval castles that retrace the history of the ancient “Signorie”, that once saw them as protagonists of the challenge between the Empire, the Municipalities, and the Pope.

Lands of border, those of Romagna, always poised between the accession to the Papacy and the flattery of the European kingdoms, cities of rich merchants and trades, incapable, as Machiavelli had to say, to bring out a territorial hegemony for “too much force in fighting each other and too much weakness to prevail over others”. 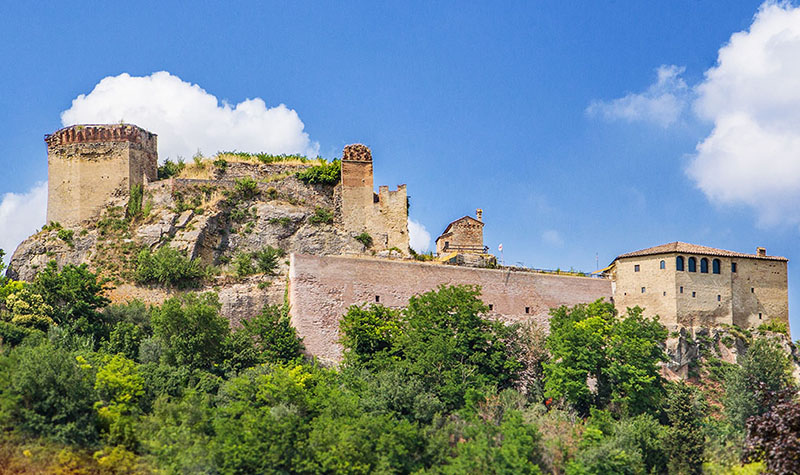 The powerful House of Malatesta and the State of the Church, as well as the Guidi Counts in the Tuscan Romagna region, represent the evolution of defensive structures in the strategic chessboard of Northern Renaissance Italy, leaving tangible signs of their domination through villages, castles, towers and defensive structures which still today embroider almost all the peaks of the hills of Romagna.

This territory still preserves a great historical-cultural heritage that is combined with an environmental diversity that has its roots throughout the centuries. Here, in fact, arise the Primordial forests of the National Park of the Casentinesi Forests that owe their extraordinary state of conservation to the historical events that have marked these lands; and always here are the natural reserves of Scardavilla and Onferno, the sources of ancient thermal waters together with a rich and diversified agricultural landscape.

The ancient Castles of Romagna that we report today are part of a network of manors that still today represents a line of fortifications that cross the Romagna’s hillside. Ancient centers of power, a symbol of the families that have managed over the centuries this part of the territory, halfway between the climate and the Mediterranean soul and the austere Northern European royalty.

The castles we mentioned in the article are part of the Castrum project: a project to promote cultural heritage and minor cities made by the Institute for Cultural Heritage of Emilia Romagna.

The Castle of Modigliana, also known as “Rocca dei Conti Guidi”, rises in the hills above the city of Faenza, at the confluence of the Acerreta, Tramazzo and Ibola streams. Founded in all probability around the tenth century, it was inhabited initially by the Countess of Franco-Germanic origin Enghelarda, who married the Tuscan count Tegrimo, thus giving rise to the dynasty of the Guidi Counts. The latter built their first headquarters here in Modigliana, so much so that the “Rocca” remained active and inhabited until 1377, when the territory passed under the city of Florence Kingdom.

The earliest traces of Dovadola’s fortified settlement date back to Roman times, although the historic center grew and developed starting from the Conti Guidi Castle dating back to the beginning of the 13th century. The Rocca is located on a high mountain spur on the river Montone and still retains an imposing Mastio of about 30 meters. The particularity of this castle is due to the presence of a defensive wall on the north side of the hill that supports the Castle, a work that was carried out during the Florentine dominion of this part of Romagna. The Rocca belonged until the end of the XIV to the local family of the Guidi Counts, who distinguished themselves for being among the strongest supporters of the Guelfa faction and for the friendship with the poet Dante Alighieri.

Find out more about the historic village of Dovadola

In the heart of Romagna, not too far from the city of Forlì, stands the cliff on which the Fortress of Castrocaro has been guarding for over a millennium. This unusual outcrop of karst rock, called locally Sasso Spungone, is what remains of an ancient submarine cliff of the Pliocene age (10 million years ago), formed by organogenic arenaceous limestone, rich in marine fossils of considerable geological interest.
Thanks to its elevated position and difficult access, therefore easily defensible, the cliff had strategic value since prehistoric times, offering, in the various caves still visible, a safe haven for its inhabitants.
In the early Middle Ages, the cliff on which stands the Fortress marked the border between the Lombard kingdom from Byzantine dominions. It is in this period that probably the first stones of the tower were placed that still dominates the town. From the Lombard era, the history of Castrocaro is divided into three fundamental periods: the feudal domain linked with the Holy Roman Empire, the papal dominion (XII century) and the Florentine era (XIII century).
Remembered in the last two hundred years for its thermal waters, this town lived in the past centuries years of great political and military prestige. A past that is still remembered during the spectacular historical re-enactments.

Find out more about the history and the culture of Castrocaro

Terra del Sole is a fortified city that the Grand Duke of Tuscany, Cosimo de Medici, built in 1564 as an administrative, judicial and military capital of the part of the Tuscan kingdom in Emilia-Romagna.
Under the aspect of the “ideal city” cherished by Renaissance thought, it represented the Florentine power and the strict administration of justice in the states of the ancient regime. From an architectural point of view instead, the city presents a bastioned rectangle inscribed with a civil and military settlement and was designed and built by the best architects and engineers of the time. The entire architectural structure of Terra del Sole was built to fully meet the new military needs emerging with the introduction of new firearms: this is why the old pre-existing fortresses, such as those of Castrocaro and Montepoggiolo, were considered obsolete.
The design of Terra del Sole represents not only an advanced model of military architecture but also a rare model of urban planning “on a human scale”, valid for our times, both for the symmetrical and perspective layout, both for the wise relationship between spaces and volumes.

The toponym Sorrivoli once referred to the numerous rivulets that surrounded the hill, but the castle is also mentioned as “Sorbetulum”, in possession of the Archbishops of Ravenna since the tenth century. The village of Sorrivoli, which during the past centuries was the most populous castle in the Romagna area, still retains the characteristics of a fortified medieval village, dominated by the fortress that was donated to the Diocese of Cesena in the post-war period by the last owners.
The Castle of Sorrivoli was a property of the archbishops of Ravenna, then passed under the Malatesta family in 1237, in 1290 become a property of the Church, and in the fifteenth century was given to the Roverella family.

Discover all the villages not to miss in the Cesena’s area.

In the fertile hill full of water and overlooking the Via Emilia and the plain to the sea overlooking the Malatesta Castle of Longiano, awarded the honor of “ideal village” in 1992 by the European Community.
The Castle owned by the Church of Rimini, in 1059 it passed under the power of the Malatesta family and then returned to the Papal State. Destroyed by the people of Cesena in 1198, it was rebuilt with the help of the Riminesi and when in 1295 the Malatesta became lords of Rimini, Longiano followed the same fate.
When the Malatesta power was broken, the castle returned to the Church of Rome, which in 1519 gave it as a feud to Count Guido Rangone of Modena, councilor of the French king Francesco I who modified the structure of the castle, partly eliminating the Malatesta fortifications and building the loggia.
The Malatesta Castle of Longiano now houses the Foundation dedicated to the poet Tito Balestra, whose collection of nearly 300 works includes the testimony of highly significant painters of the 20th century, such as Maccari, De Pisis, Guttuso, Manzù, Vespignani, Rosai, Maffai, Campigli. In addition, the engravings by Morandi, Zancanaro, Goya, Chagall, Matisse and other authors who entertained exchanges and friendship with Tito Balestra.

Find out more about the Malatesta village of Longiano

Called the cradle of Malatesta Family, which has owned this city for about 3 centuries, the village of Verucchio rises on the rocky spur that closes, together with the village of Torriana, the Marecchia valley towards the sea.
The historic center is formed by the union of two different castles: Sasso and Passarello. The “Rocca del Sasso” is one of the most evocative Malatesta fortifications that has seen the overlapping and integration of architectural parts built in different periods, between the twelfth and eighteenth centuries. From here the “Old Mastin”, as was known one of the most famous warlords of the Malatestas, conquered Rimini in 1295 and founded the Malatesta Kingdom.
Inside the castle, you can visit the impressive Great Hall, the various rooms that host exhibitions and installations, the models with the construction phases of the fortress and the representation of the siege of Federico da Montefeltro in 1463 and the 13th century keep.
The “Rocca di Passerello” instead stood on the mountain opposite the Sasso and on its ruins in 1600 was built the convent of the nuns of S. Chiara. The village of Verucchio also boasts an ancient history of millennia, connected to the street of amber from northern Europe now told in the new archaeological museum where you can admire findings of extraordinary beauty, unique in Italy.

Find out more about the Malatesta headquarter of Verucchio