Inspiration and role model since 1300 for a number of persons of letters, who had to compete with his poetry, Dante Alighieri is maybe the most famous Italian poet in the world.

His Comedy is universally considered the most important work of the Italian language, and one of the greatest masterpieces of world literature. Through his work, which helped him to deal with the unsettling exhile from Florence, Dante managed to write about the deepest and innest feelings of the human soul: passions, torments, phantasies, and much more. His poetry hides many geographical and visual references that enrich the storytelling, giving the right context to understand the reading.

Everything has a subjective value: the Comedy is not only a story of the Christian soul addressed to God but it is also – and most of all – a personal matter, something inextricably intertwined with the events he writes about.

Leafing through the work, you can find many geographical references that talk about the places the Supreme Poet visited during the disruptive exhile from his motherland, many of which are right in Emilia Romagna, since he found his refuge here, by the noble local families.

Starting from some lines of the Comedy, let’s make a tour across our region, and discover better some of the places that the poet himself mentioned in his masterpiece.

As many of you may know, RAVENNA is the city of the Supreme Poet. His tomb is in this city, right in the historcial centre. The nearby Basilica of San Francesco was the place where the funeral ceremonies took place: It is a place of peace and spirituality, and travellers are asked to respect the silence while walking across the area and along the delightful garden of the Old Franciscan Cloisters.

It was the lord of Ravenna Guido da Polenta who welcomed Dante, the same gentleman who was the father of Francesca, the famous lady mentioned in the 5th Canto of Inferno, overwhelmed by her love for Paolo Malatesta.

The land, that gave me birth,
Is situate on the coast, where Po descends
To rest in ocean with his sequent streams
(Inferno, Canto V, vv. 97-99)


Beyond this, the Comedy contains many other references to the Byzantine capital. Among the others, one, in particular, recalls the lash pine forest of Classe, that green lung that is still a distinctive feature on the Adriatic coast immediately south to the city.

Such as from branch to branch goes gathering on
Through the pine forest on the shore of Chiassi,
When Eolus unlooses the Sirocco
(Purgatorio, Canto XXVIII, vv. 19-21) 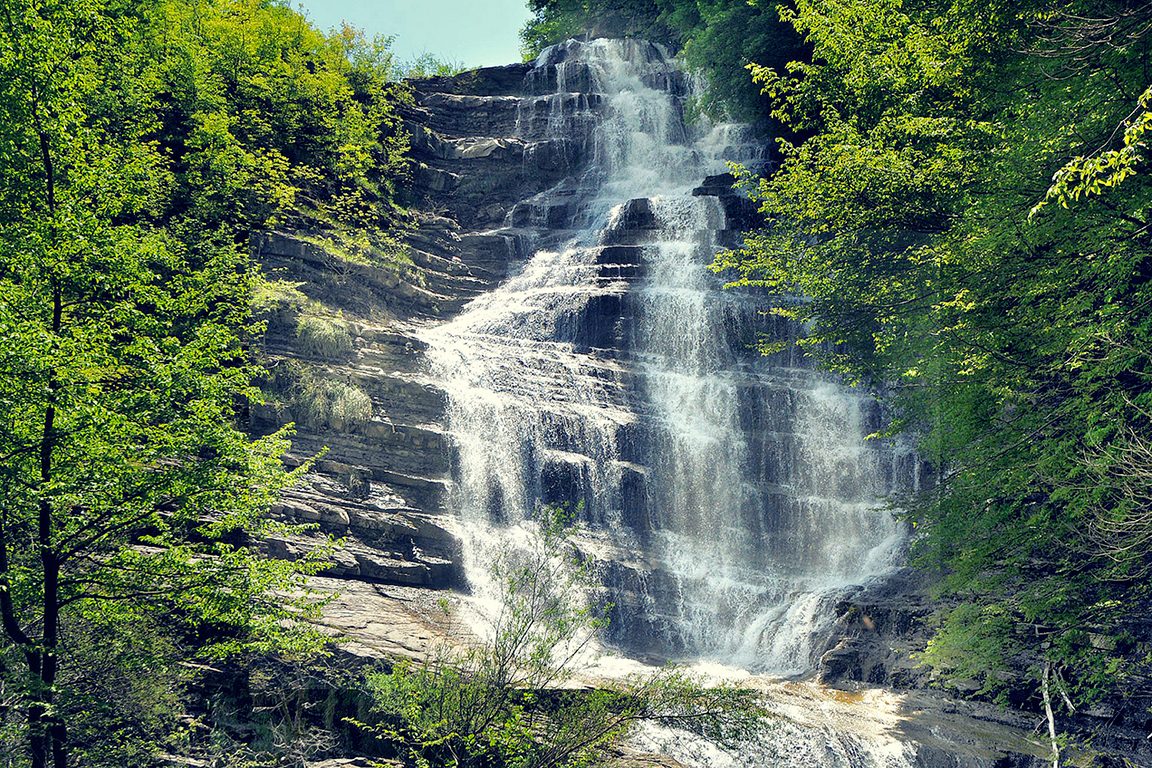 For some years, then, there has also been a path (otherwise known as Il Cammino di Dante® – Dante’s Walk) which ideally traces the path – from Florence to Ravenna – that the Great Poet had to follow arriving in Romagna.

If we follow this itinerary, we meet the village of SAN BENEDETTO IN ALPE, a small jewel immersed in the Tosco-Romagnolo Apennines. It appears in the XVI Canto of Dante’s Inferno in a famous passage where the violent roaring of the Acquacheta waterfall is compared to the Flegetonte river.

Unmingled from the Mount of Vesulo,
On the left side of Apennine, toward
The east, which Acquacheta higher up
They call, ere it descend into the vale,
At Forli, by that name no longer known,
Rebellows o’er Saint Benedict, roll’d on
From the Alpine summit down a precipice,
Where space enough to lodge a thousand spreads;
Thus downward from a craggy steep we found
That this dark wave resounded, roaring loud,
So that the ear its clamour soon had stunn’d.
(Inferno, Canto XVI, vv. 94-102)


It is here that, wandering among the trees of the National Park of Foreste Casentinesi, you arrive at one of the most beautiful spots of the entire territory. After having descended the valley and crossed the torrent, in a few minutes, you reach the top of the waterfall and the little village of the Romiti monks (now a mass of ruins and which Dante certainly had to see with his own eyes), that once was a hermitage of the Abbey of San Benedetto in Alpe.

Just a few miles away, PORTICO DI ROMAGNA – Orange Flag by Touring Club Italiano – is inextricably linked with the personal stories of the Poet. Tradition has it, even if it completely unfounded, that Dante met face to face his beloved Beatrice just here at Palazzo Portinari. Today the historic center of the village retains its medieval charm surrounded by the greenery of the National Park of Foreste Casentinesi. 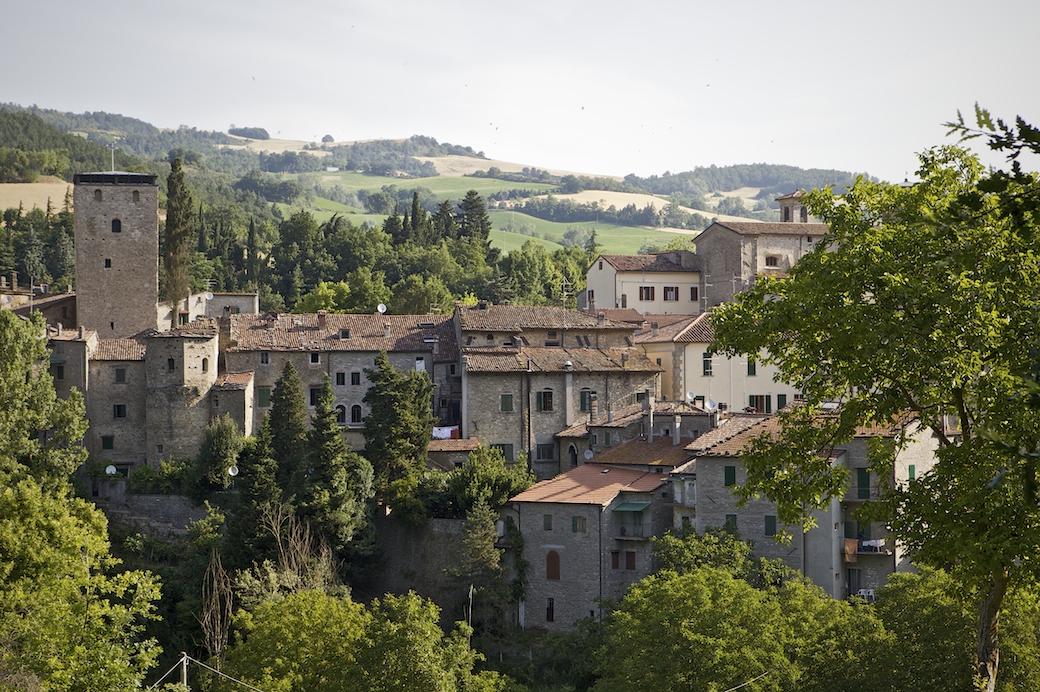 On the hills just above Forlì, CASTROCARO TERME is another town that Dante Alighieri had the opportunity to know. In the XIVth Canto of the Purgatory, it is mentioned together with the town of BAGNACAVALLO. While the first one impresses with its imposing medieval fortress, the second shows itself as a small art city in the heart of Romagna, a few kilometers from the Adriatic and from major cities such as Ravenna, Faenza, Bologna, Ferrara.

Bagnacaval does well in not begetting
And ill does Castrocaro, and Conio worse,
In taking trouble to beget such Counts
(Purgatorio, Canto XIV, vv. 115-117)


Then there is BERTINORO, better known as the “Balcony of Romagna” because of the magnificent view it offers over the sea and the surrounding hill, which still today preserves its original style with its ancient cobbled streets and breathtaking views.

O Brettinoro! why dost thou not flee,
Seeing that all thy family is gone,
And many people, not to be corrupted?
(Purgatorio, Canto XIV, vv. 112-114)


FORLÌ preserves several inscriptions of Dante verses along the streets of its historic center. The poet stayed as a guest here of Scarpetta Ordelaffi in 1303, with whom he worked as an assistant.

The city which once made the long resistance,
⁠And of the French a sanguinary heap,
⁠Beneath the Green Paws finds itself again
(Inferno, Canto XXVII, vv. 43-45) 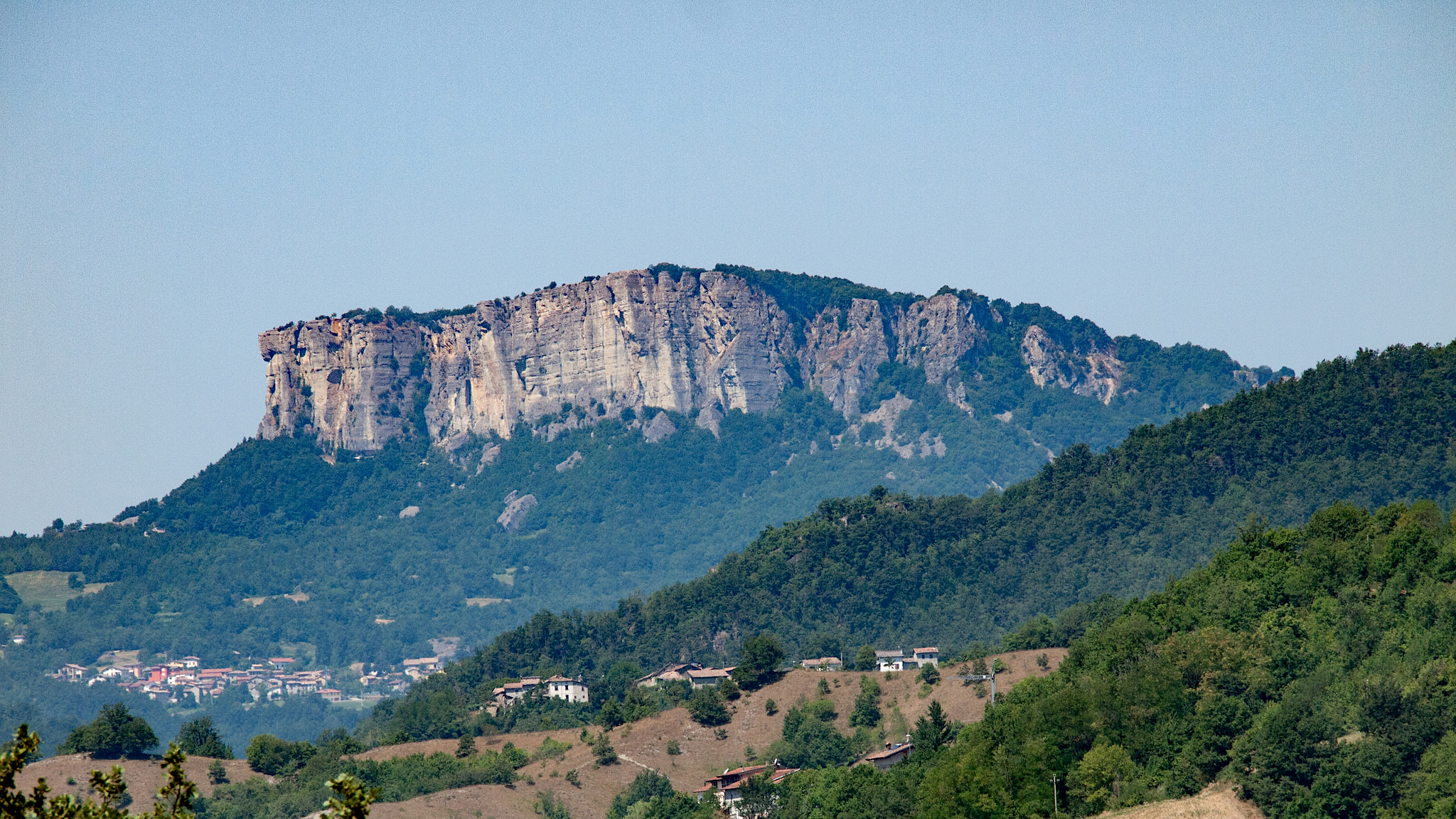 Also, IMOLA, the only Italian city whose map was designed by Leonardo da Vinci, is remembered in Dante’s work through, for example, a geographical periphery that unites it to nearby FAENZA.

The cities of Lamone and Santerno
⁠Governs the Lioncel of the white lair,
Who changes sides ‘twixt summer-time and winter
(Inferno, Canto XXVII, vv. 49 – 51)


But many others are the places of Emilia Romagna present in the Comedy, directly or through the mention of characters linked to it. And so we meet the Abbey of Pomposa in the XXI Canto of the Paradiso, the Garisenda tower of Bologna in the XXXI Canto of the Inferno, the medieval village of Verucchio in the XXVII Canto of the Inferno, San Leo and Stone of Bismantova in  the Canto IV of the Purgatorio (some scholars think that Dante was inspired by the latter, imagining the features of Purgatory), etc.

A long and interesting quotation that makes Emilia Romagna a territory well present in the poetry of Dante Alighieri. It offers a geographical cross-section and a very interesting environmental context in which still we, citizens and tourists, move in search of the most vivid traces of a period now far but paradoxically so close. 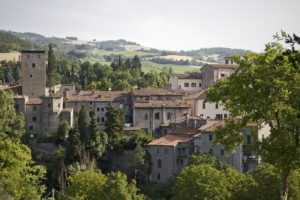