Archaeology means emotions, a sense of wonder for discovery, but also love for travel. It’s a journey backwards in history, that aims at knowing step by step what our origins are and from where we come. This is a chance to give our present a social meaning through the interpretation of material rests, but also of written and iconographic remains our ancestors left us during their life.

Emilia Romagna, like all the rest of Italy, over the millennia experienced different people and cultures that have been marking and moulding history over the centuries. Archaeological digs started from the 19th century onwards, whether fortuitous or planned. The findings led to the definition of an ever more precise timeline, especially as regards the alternation of cultures, playing an active role in the creation of collective memory. Today, part of the findings are guarded inside the museums and the archaeological sites spread throughout the Romagna.

In this piece, we are going to start a journey in order to get to know more closely the sites and to give you some useful advice if you want to visit them personally.

Ravenna and its province

Domus of the Stone Carpets


Where: via Barbiani | Ravenna
It is one of the most important archaeological sites discovered during the last twenty years in Italy. It is an estate dating back between the Roman and the Byzantine Era with finely decorated mosaic and marble floors.


Where: via San Vitale, 17 | Ravenna
The museum is inside the Benedictine monastery of San Vitale and it hosts important archaeological findings and collections of minor arts that go backwards inside the history of Ravenna and its territory, they stem from different periods of history, from the Protohistoric Era until the Late Middle Ages.


Where: via di Roma, corner with via Alberoni | Ravenna
According to some people, this building was part of the at that time King Theoderic’s Palace, but others say that it is what remains of an ancient Late Medieval church. What is certain is that at the highest floor it guards some of the mosaic and marble decorations that were unearthed at the beginning of the last century in the Late Antique Imperial Palace in Ravenna. 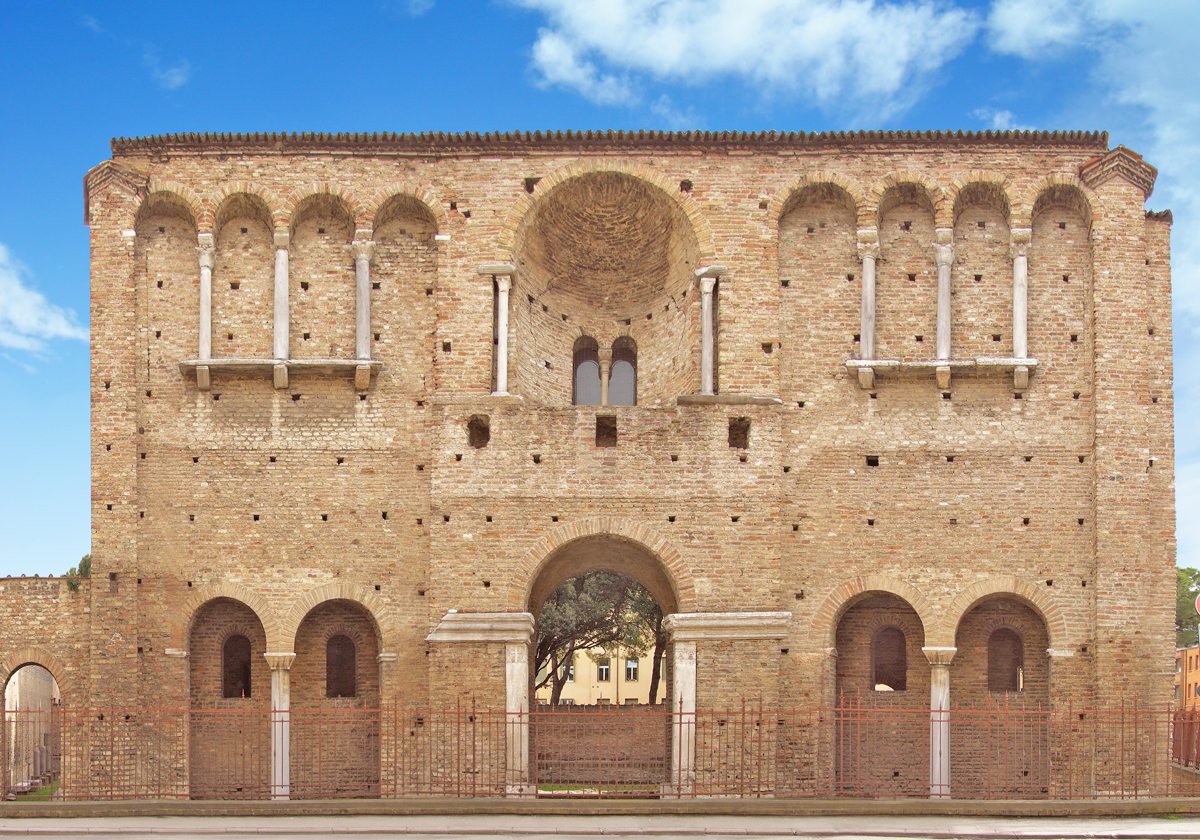 
Where: via Rondinelli, 2 | Ravenna
It is a display area entirely dedicated to the art of mosaic: splendid artifacts coming from Ravenna and its territory are proof of the greatness of this craft technique.


Where: via San Vitale, 17 | Ravenna
This museum was built during the second half of the 17th century in order to keep the artworks of the ancient cathedral, which, right during that period, was demolished and rebuilt. It has been collecting over the centuries a number of objects recovered from archaeological works that were carried out in the churches of the Diocese. Its most important feature is in its inside though: it enshrines one of the Unesco monuments of the city i.e. the archiepiscopal chapel of Sant’Andrea.

The Ancient Port of Classe


Where: via Marabina, 7 | Ravenna
The porticoed warehouses along the freight stations of a channel and on a paved street are what is left of the ancient port of Classe. It was built at the beginning of the 5th century when the capital of the Roman Empire moved from Milan to Ravenna. 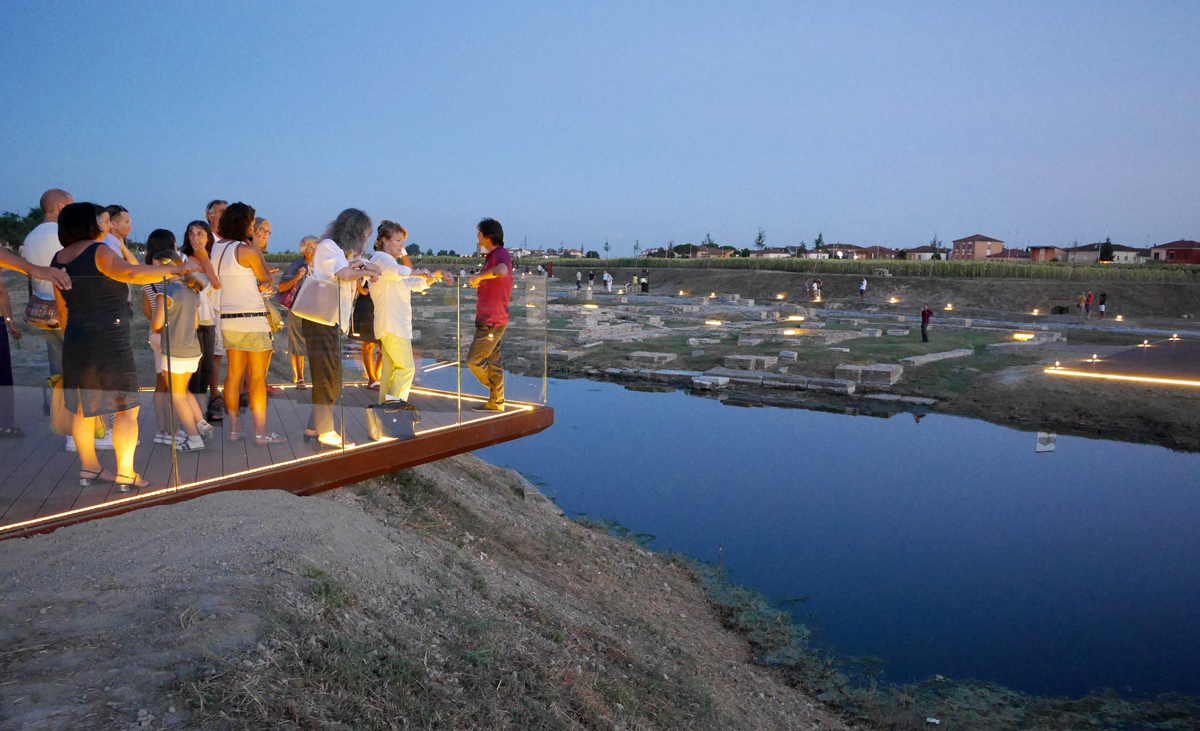 
Where: via Classense, 29 | Ravenna
It is one of the most important archaeological museums in Italy and a real trip backwards in history. Housed in the ex-sugar factory of Classe, it stretches over an exhibition area of 2800 square metres, surrounded by a green park of one and a half hectares always open to the public.

The Roman Villa in Russi


Where: via Fiumazzo, 25 | Russi
One of the best-preserved country-villas of the whole Northern Italy is only 20 km westwards from Ravenna. It was build to grow food aimed at the military Roman fleet stationed in Classe, and today it looks like as it should have been during the first epoch of Roman Empire history (1st – 2nd century a.D.).


Where: Piazza Fratti, 4 | Forlimpopoli
It is hosted inside an Albornoz fortress and, thanks to the archaeological findings of the area of Forum Popili, it guides visitors inside the local history. It is an itinerary that goes from the Paleolithic until the Middle Ages. 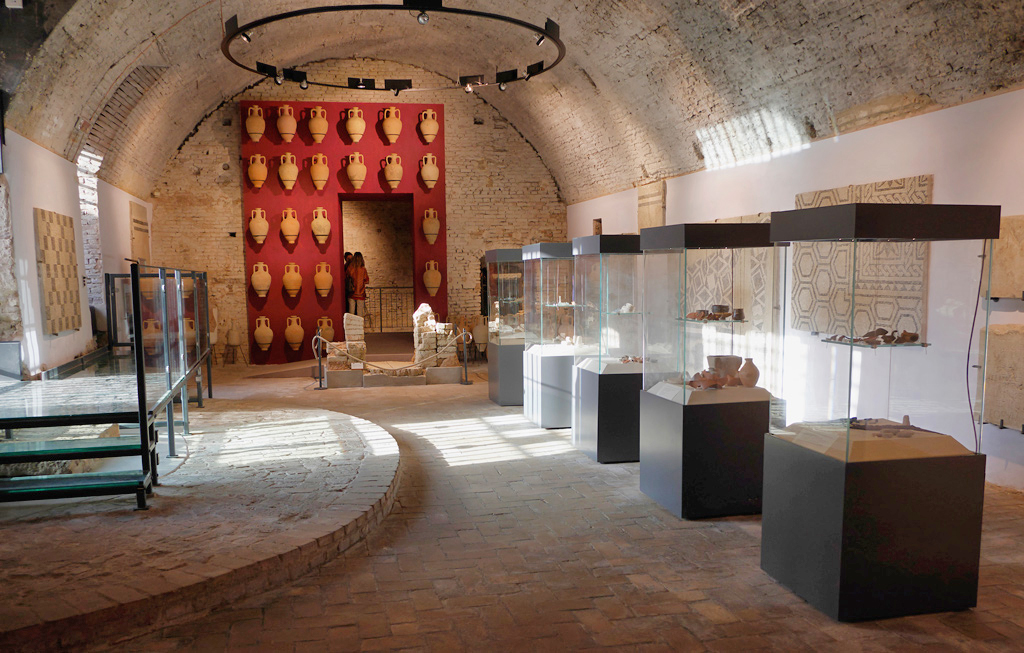 
Where: via Pianetto Borgo | Galeata
The museum is near the archaeological area of the Roman city of Mevaniola, and it is a part of the Convent of the Minor Fathers in Pianetto. Inside, an itinerary retraces the history of the Roman-Umbrian city of Mevaniola, of the refined and elegant Theoderic’s Villa, of the lone Abbey of Sant’Ellero and of the Castle of Pianetto.


Where: via Cesio Sabino, 39 | Sarsina
It is one of the most important archaeological museums in Northern Italy. It opened at the end of the 19th century and it has been collecting over time always more materials coming from the excavation in the city and, most of all, in the necropolis in Pian di Bezzo. Even if it hosts items of a very long time frame, its collections focuses mostly on the Republican Imperial Epoch (1st century b.C. until 2nd – 3rd century a.D.). 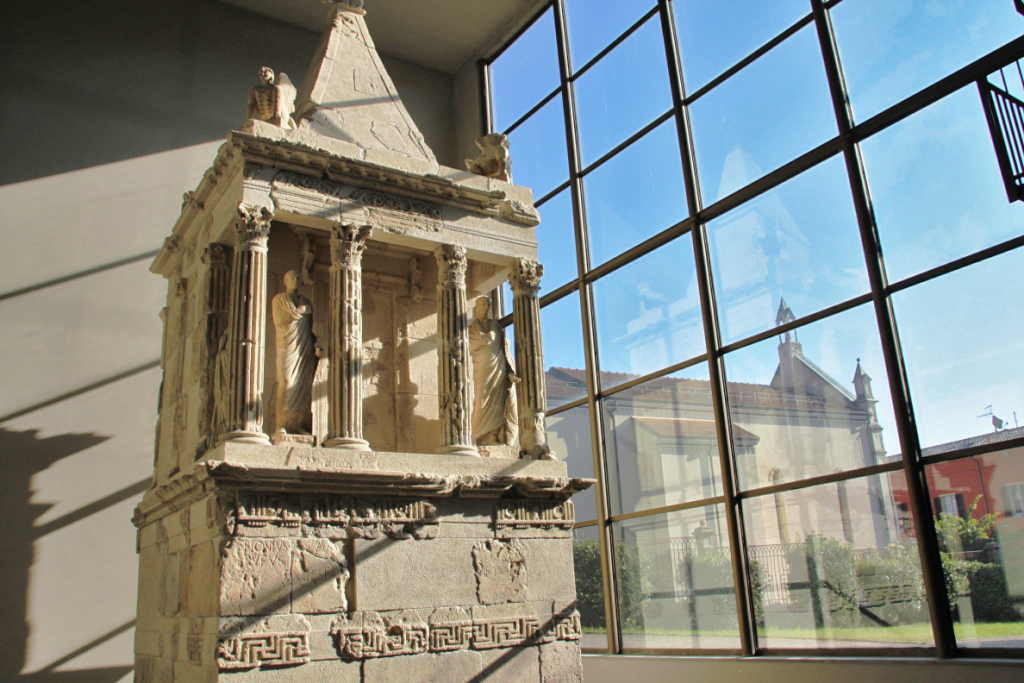 
Where: Piazza Maurizio Bufalini | Cesena
The Malatestian Library is home to this museum, which is also part of the Unesco register Mémoire du Monde. The museum retraces the history of Cesena and of its territory thanks to its material culture.


Where: via Armellini, 18 | Cesenatico (FC)
Along the harbour canal of Cesenatico, the museum hosts several relics related to the city’s past, most of them dating back to the Roman Age.


Where: via Matteotti, 27 | Borghi (FC)
It was founded in 1885 by Don Francesco Renzi and it is one of the most ancient museums in Italy. The museum recollects the history of the territory between the Valleys of the rivers Marecchia and Rubicone thanks to its various themed collections and several items that have been found over the centuries.


Where: via San Giovanni, 7 | Savignano Sul Rubicone
This museum was born in 1930 with the aim of collecting the archaeological objects found along the Via Aemilia. It’s Giorgio Franchini who asked for this museum at the time, and now it hosts a very significant collection of architectural and sculptural slivers, figurative terracotta linked to the decoration of important buildings dating back to the Late Republican Era, several Etruscan and Roman coins, as well as pottery and even fossils and osteological findings.

Rimini and its province

Bridge of Tiberius, Arch of Augustus and Roman amphitheatre


Where: city centre | Rimini
The historic centre of Rimini jealously enshrines these three Roman monuments; they are reference points to know the history of the ancient Ariminum. 
Where: Piazza Ferrari | Rimini
It is a veritable Roman Domus that was dug in extension at the beginning of the 1980s right in the heart of Rimini: it consists of more than 700mq of mosaic floors and material structures. The excavation led to the discovery of the remains of a Late Imperial dwelling and of the tracks of a Late Medieval village and of a big burial site. 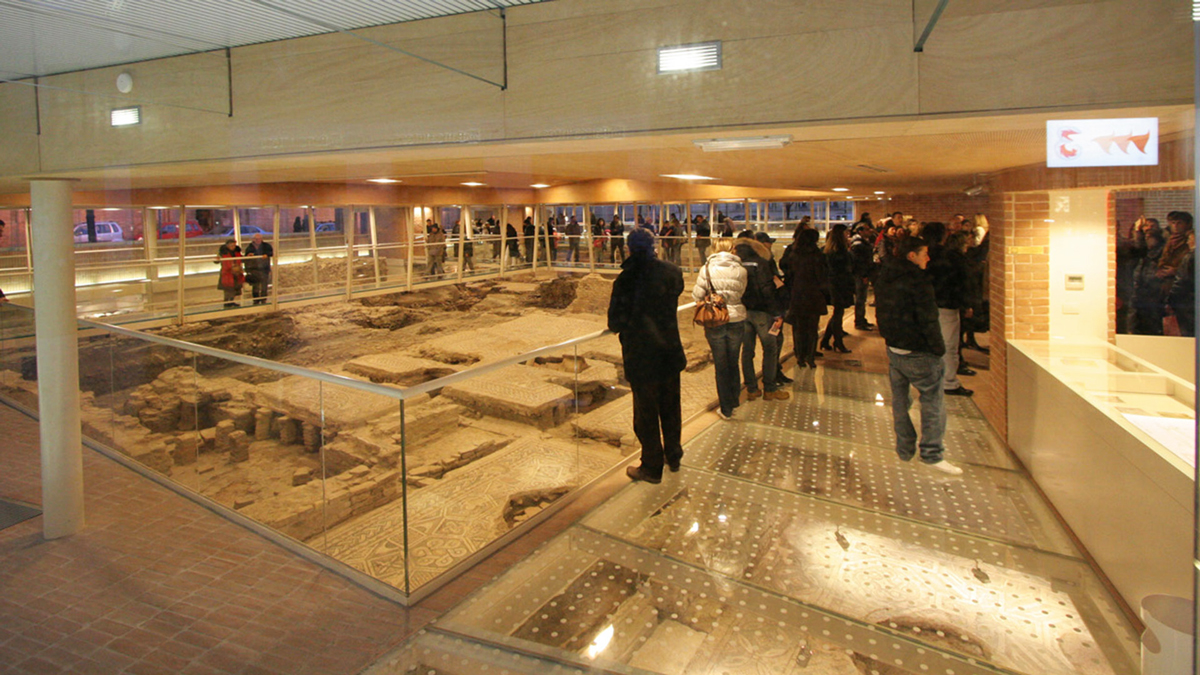 
Where: via L. Tonini, 1 | Rimini
This museum is dedicated to the city’s history and, inside its archaeological section, it offers an excursus that goes from Prehistory until Late Antiquity. The exhibition consists of the surgical instruments and artifacts that were found during the excavation in Piazza Ferrari and of the splendid mosaics from Palazzo Diotallevi.


Where: Corso d’Augusto, 235 | Rimini
The great Giulio Caesar’s avatar guides you along a multimedia and interactive itinerary at the discovery of Rimini and its territory.


Where: via Sant’Agostino, 14 | Verucchio
The museum is inside the Agostinian Fathers Monastery dating back to the 14th century. It hosts objects and furniture recalling the Etruscan occupation over the whole area dating back to the Orientalising Epoch, one of their most glorious periods. The museum exhibits relics coming from hundreds of Villanovan and Etruscan tombs dating back between the 10th and 6th century b.C. 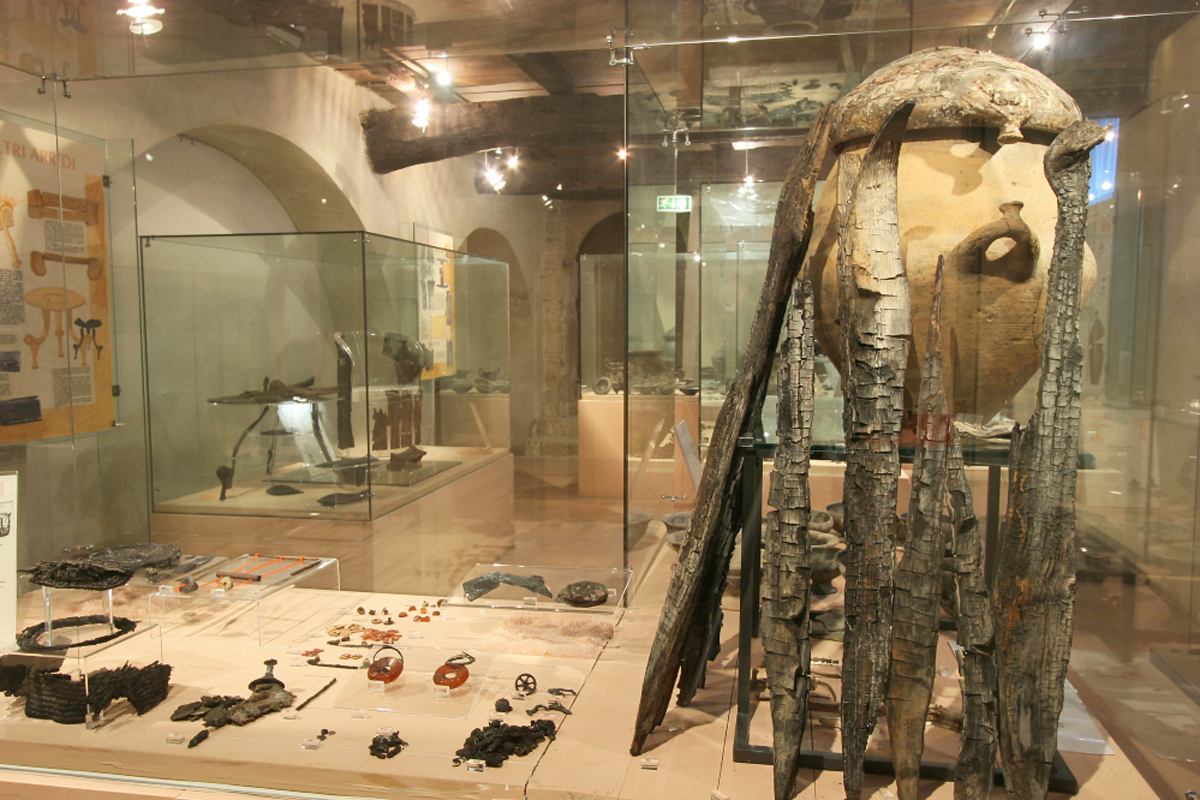 
Where: via Montevecchi, 41 | Santarcangelo di Romagna
Deep in the heart of one of the most beautiful villages of the province of Rimini, the museum hosts and gives value to the archaeological and art-historical heritage of the city and its territory.


Where: via Lazio, 10 | Riccione
The most significant testimony linked to Riccione and its surroundings, belonging to a period that goes from prehistory to the Roman Age, is guarded inside this museum. A rich choice of fossils, minerals, rocks and a wide range of stone, bone, pottery and metal items is on display here.


Where: via Pascoli, 23 | Cattolica
This museum hosts an entire section dedicated not only to the local seafaring but also to the building phases and the further developments of the ancient city of Cattolica, from the very first years of Romane Age until the Late Imperial Age.