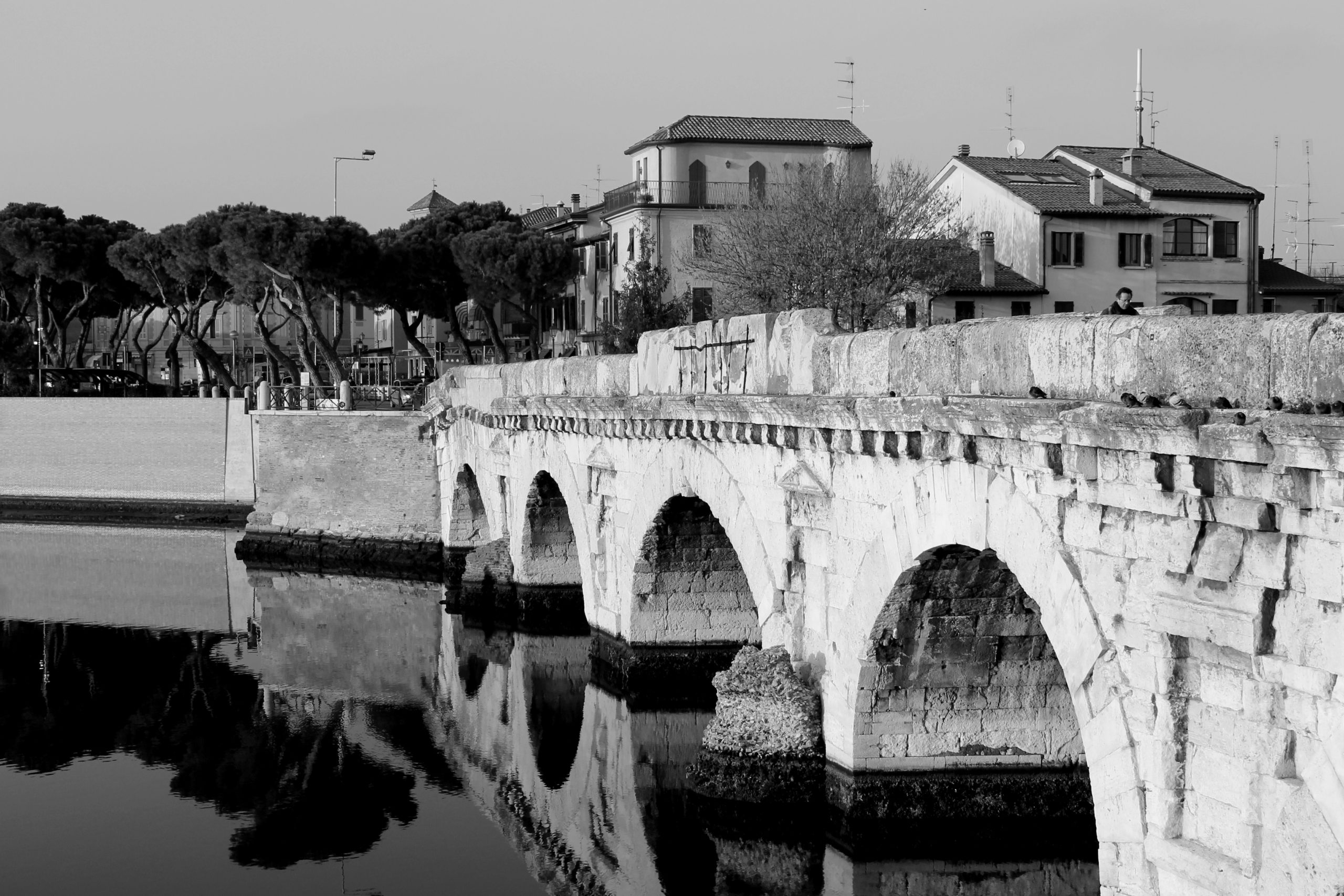 Strolling around the ancient roman town of Ariminum

Rimini is not only the lively and bubbly town everybody knows, but it also hosts important remains of its past, dating back to the Roman time.

What did ancient Ariminum look like? It is not even necessary to use your imagination, you can still see it today, strolling around the city. Thanks to the info of the official tourist web site, here we are with an itinerary that allows you to jump back in time.

THE BRIDGE OF TIBERIUS


The Bridge of Tiberius is a testament to the engineering know-how of the ancient Romans.
Built 2000 years ago it has remained standing, despite the rigours of war and bombing. The secret is that its pillars rest on a single foundation.
The bridge is a piece of the ancient Roman past and its ﬁve arches in white Istrian stone have been a part of the city scene since 14 A.D. (during the reign of Augustus). It was completed in 21 A.D. during the reign of Tiberius to mark  (as it still does) the beginning of the Via Emilia.
Today, after 2000 years in service it has still not been pensioned off. 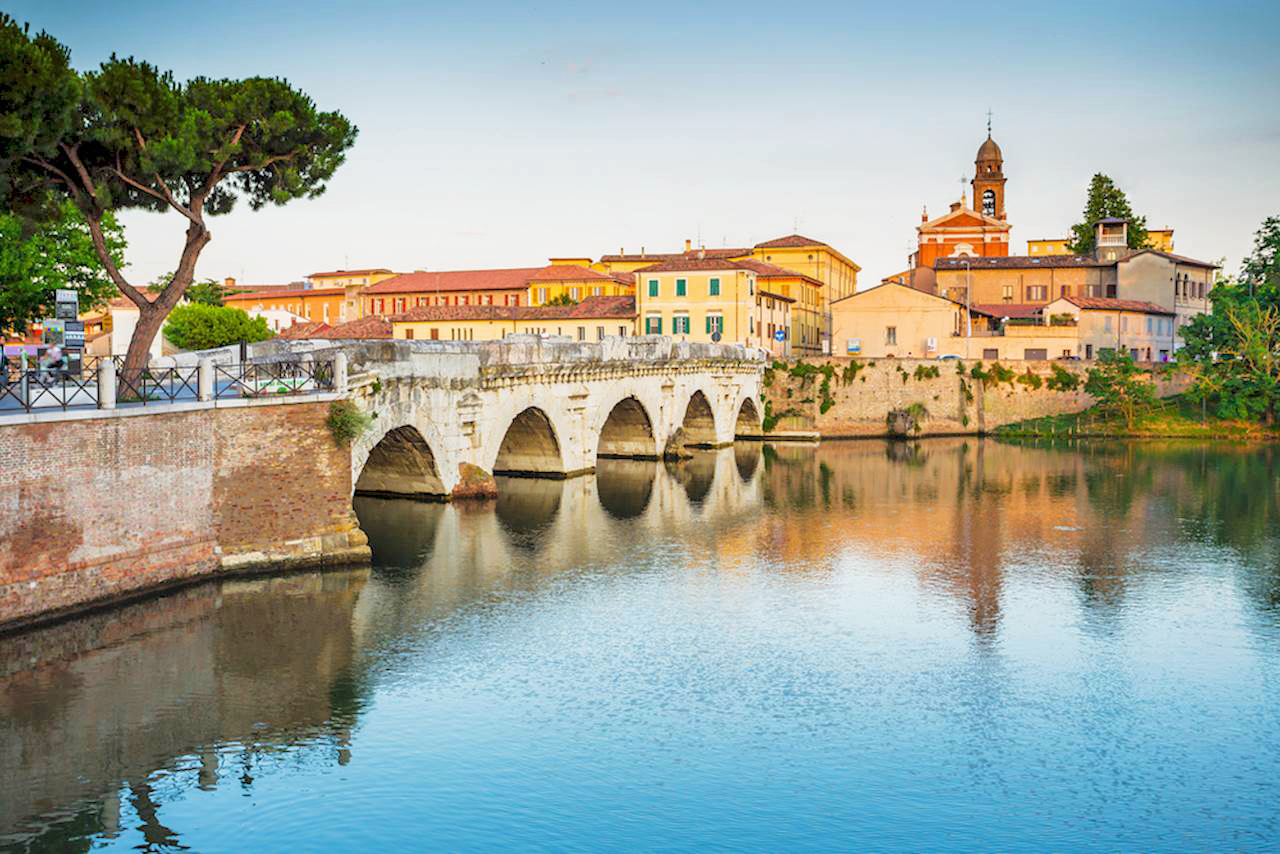 
The Piazza marks the position of the ancient Roman forum at the intersection of the Decumanus Maxima and the Cardo Romano. The forum was the centre of civic life for the Latin-speaking citizens of Rimini. At that time the square was much larger. On one side there is a statue of Julius Caesar whilst at the entrance to Via IV Novembre there is a stone pillar in memory of the speech Caesar made to his troops after they crossed the River Rubicon.


What an enviable position Ariminum had, as, protected on three sides by water (the sea, the River Marecchia and the Ausa which ﬂows underground today), it only needed to be defended from the direction of the mountains to the north. Anyone entering the city from that side would have had to pass through the Montanara Gate. Although after the war, during rebuilding work to the city, this gate was taken down, it has recently been rebuilt in Via Garibaldi. Its position is slightly different from before, but the original materials have been used for the reconstruction.

THE ARCH OF AUGUSTUS


Even somebody who has never visited Rimini may be familiar with the Arch of Augustus since it is often seen in books on the history of art, or in films and TV programmes.
What can be said about it? Well, of all the surviving ancient Roman triumphal arches it is the oldest, dating from 27 B.C. It is 17 metres high, built in Istrian stone and erected here in Rimini by express wish of Emperor Augustus. In 1935 it was decided to demolish the buildings around it to give the construction a fitting setting as the city’s Triumphal Arch.
It would be a real shame to view it only from a car window while driving past. It is much better to approach the monument on foot in order to appreciate it from close up and to experience the emotions called forth by the divinities represented on the oval ornaments: Jupiter and Apollo facing away from the city and Neptune and Rome facing inwards. They represent the greatness of Rome and Augustus’ power. 
The City Museum (Via L. Tonini 1) records Rimini’s past existence and is a treasure trove of wonders and curiosities starting from the cobblestones hand-carved by man 1 million years ago, as seen in the archeological section, where visitors can pass through all the stages of civilisation to the Roman era and the Late Antiquity.
Here you can admire the pieces of stone used as entrance tickets to the amphitheatre, statuettes of gladiators, numerous coins from the Roman era, magniﬁcent mosaics, amphorae and tiles from the kilns used by the very ﬁrst Rimini artisans, together with the exceptional array of surgical implements and the splendid glass picture from the Surgeon’s “Domus” (House).


The Surgeon’s House (II century A.D.) is an exceptional site which has proved to be of interest to experts from all over the world. It contains a doctor’s surgery, perfectly preserved rather like the remains at Pompeii. In fact, after a barbarian attack on the city, there was a fire which caused the walls of the room to fold inwards.
The domus has only recently been excavated but its importance was immediately recognised because every detail of the scene had been preserved: the floor, the walls, the door hinges, the medicines bottles, the writing desk, the hot water bottle in the shape of a foot and the couch for the patient.
Above all, there is the most complete collection of surgical instruments including those used for amputation and dental fillings ever found.
From 2008 the site constitutes an integral part of the City Museum and it is possible to visit the excavations in Piazza Ferrari where they can be viewed thanks to the innovative glass covering together with a hanging garden.


Only the ruins of the Amphitheatre (II century A.D.) on the seaward side of the city are visible today. It could accommodate over 12.000 spectators. The Amphitheatre was only discovered in 1800 because a convent and other buildings had been erected on the site. You can obtain information about a guided tour at the City Museum.