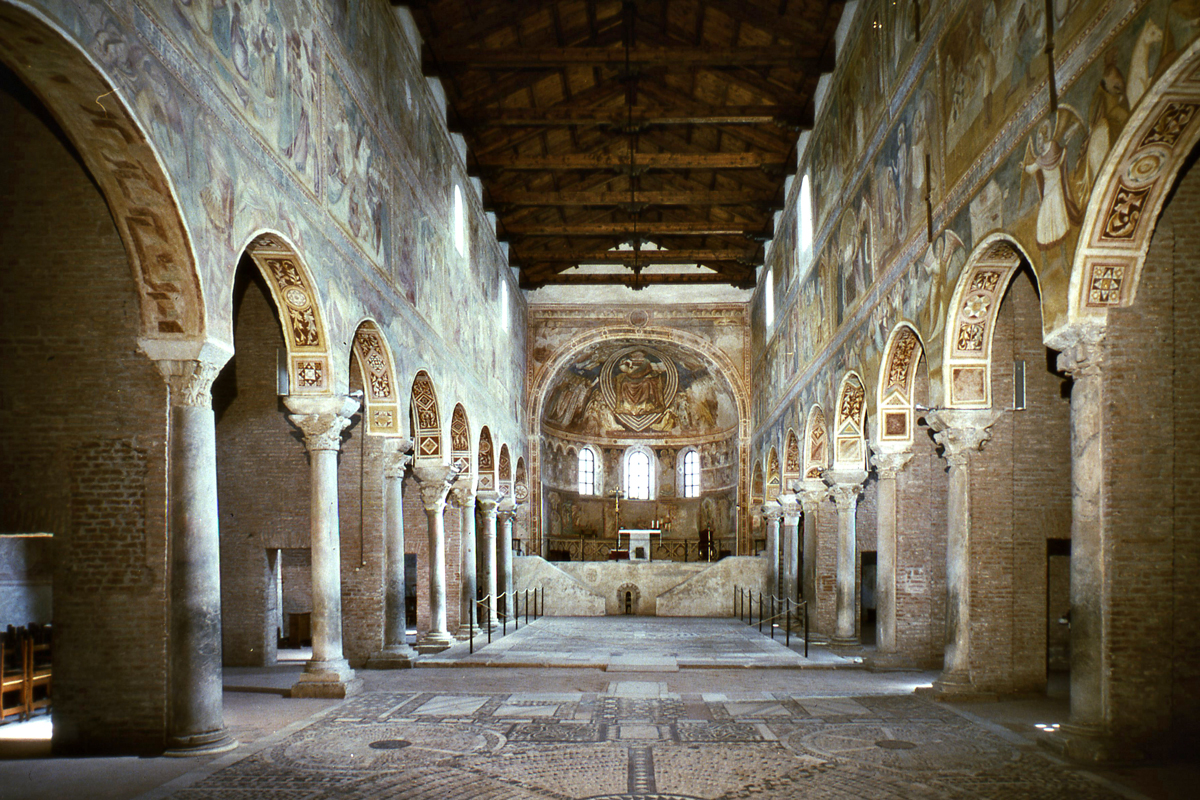 Following the state highway Romea, which connects Ravenna and Mestre, all of a sudden – at the limits of the Po Delta Park, jumps into view the Abbey of Pomposa.
This overwhelming presence, with its 48 m. of height, stands out in all its wealth over the surrounding plain and makes the area a captivating point of interest for anyone who ends up here.

In this place shrouded in the typical fog blanket of the Po valley, starting from the 6th-7th century AD, small groups of Benedictine monks chose to create a little community.

It was the beginning of the Middle Ages, and you should know that, in this period, the area was not so healthy or easily reachable and populous. The coastline was underdeveloped, the landscape consisted mostly of water and some submerged plots of land. Ferrara did not exist yet, and only Comacchio had a determining role as a marketplace.

The swamps all around did not leave much space to human settlements, except for some areas such as the so-called ‘Insula Pomposiana’, placed between two branches of the Po river and surrounded by thick wooded vegetation. 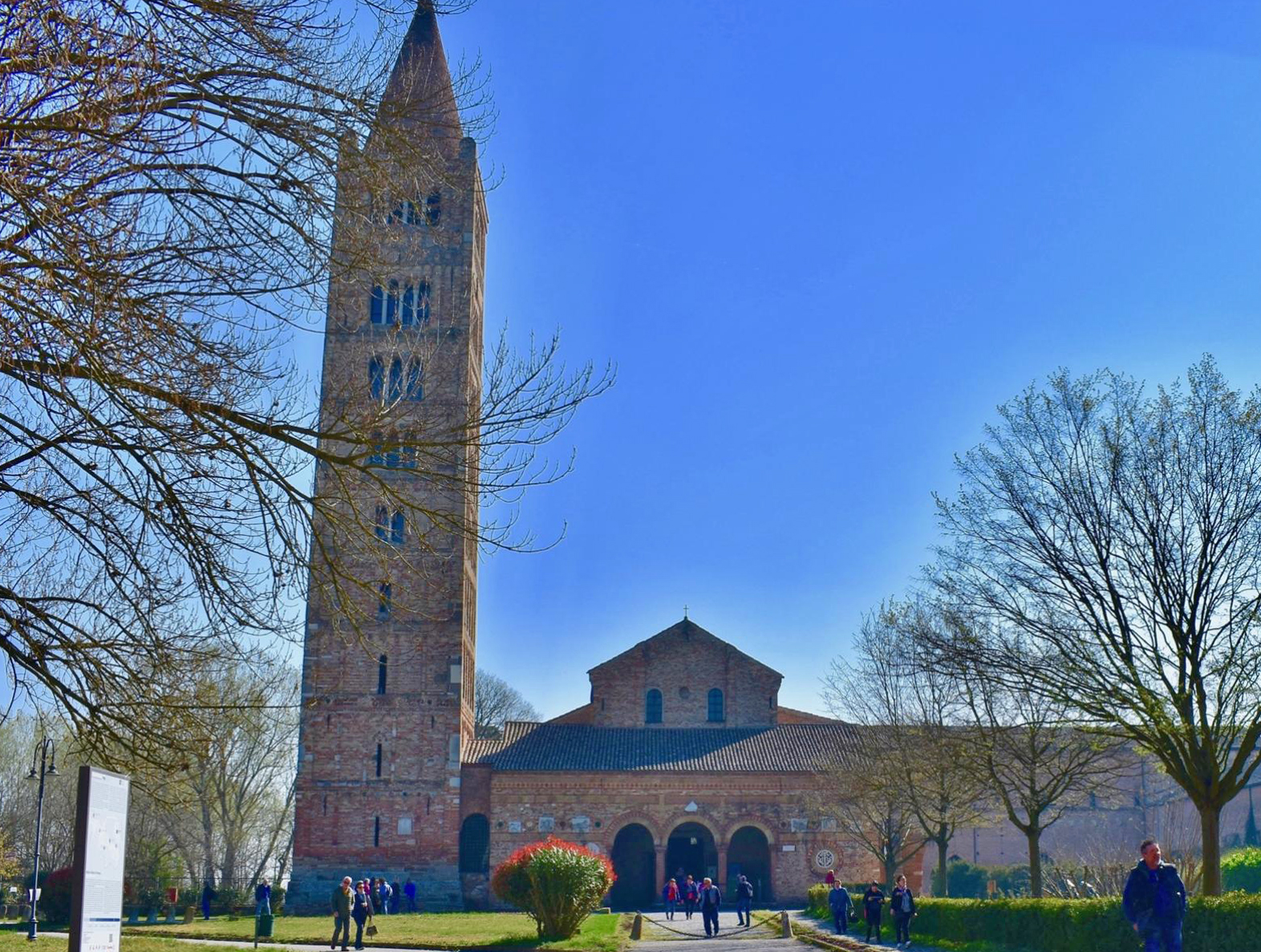 For all these reasons, this place isolated from the rest of the world turned out to be the ideal setting, to meditate, live in peace, and talk to God. The Abbey of Pomposa started to grow at the beginning of the 9th century, becoming the abbey that we still see and that entered Italian history.

In 1206, it was officially consecrated, becoming one of the most important monasteries in north-central Italy. It became the privileged destination for hermits, emperors, nobles, saints and pilgrims alike as well as a fundamental crossroad for any traveller from the North Sea that wanted to reach Rome (and return), following the stages of the Via Romea Germanica.

The Middle Ages and a number of controversial happenings led the walls of the abbey to face several up and downs over history, which always played a fundamental leading role from a cultural and religious point of view.

Managed by the State through Polo Museale dell’Emilia Romagna, the abbey is a vast and complex heritage that still makes an impression every time someone stops in this little artistic site lost in the valleys of Ferrara.

The Basilica of Santa Maria Assunta


Imposing and bewitching, especially on foggy days, the Basilica of Santa Maria Assunta leaps out for the bright colours of the bricks of its façade, the replaced marble inserts and the several coloured ‘bacini’ (external decorative elements of glazed ceramic) coming from various places of the Mediterranean, such as Egypt, Tunisia, or Sicily.

The most ancient part dates back to the 7th -9th century AD, even though the real growth and development did not take place before the year 1000 when it was lengthened with new aisles and improved with an exquisite atrium with earthenware friezes and symbolic-religious animals.

Next to the basilica, attached to it, the Romanic-Lombard bell tower built in 1603 by architect Deusdedit impresses for its height when compared to the basilica, and most of all, to the surrounding flat and regular landscape.

The church clearly reminisces the basilicas of the nearby town of Ravenna. Even the most inexperienced observer would realize the artistic contaminations and parallels: the basilica plan with three naves scored by Roman and Byzantine columns and the raised presbytery with crypt enclosed are here an unmistakable reference.


Most of all, the decoration of the 12th century-old floor (the oldest part dates back to the 7th century, and is near the apse) blatantly recalls the geometrical and figurative elements of the mosaic tradition and the marbles that are keystones of the decorations in the Byzantine Capital (and of the late-Roman tradition in general).

The walls, though, enshrine the greatest wonder: in the frescoed cycles of the Bologna school dating back to the 14th century along with remains of the prior decorations visitor loses his gaze in amazement.

They depict stories of the Old and New Testament, scenes taken from the Apocalypse, and an anguished Last Judgement. Something incredible, that at first sight may result mysterious and inscrutable because of its armour of symbols and colours, reveals to the careful observer a captivating trip across the religious medieval, figurative language.

The monastery and the Palace Della Ragione


The real abbatial complex of Pomposa is right next to the Basilica of Santa Maria Assunta—or at least, what remains of it.

According to the Benedictine monks’ tradition, the jointed building stretched around the porticoed cloister, having a well in the middle of the area. Here, the Benedictines spent their days following the monastic rule ‘Ora et labora’ (Pray and work). These spaces also featured the refectory, the dormitory (now the museum), and the chapter house. 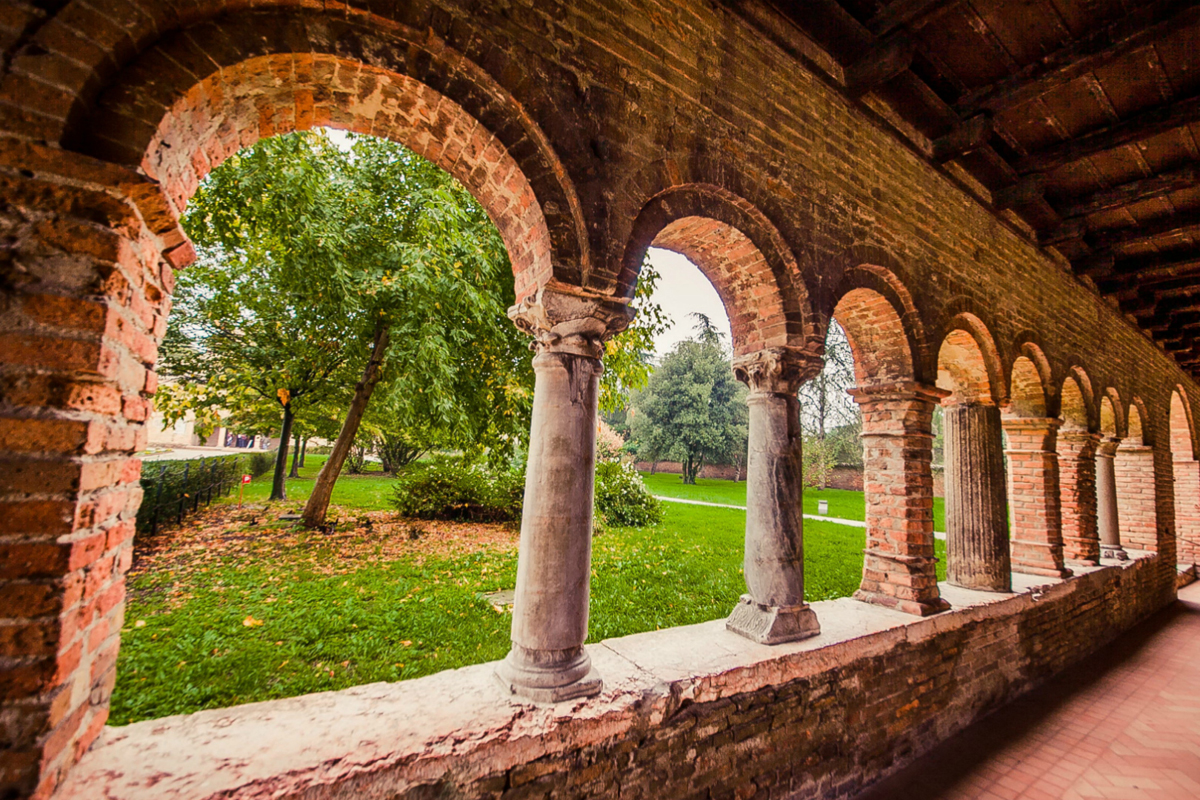 Most of these spaces are still visible and have at their walls amazing frescoes that witness their history, art, and religion.


The chapter house displays paintings of the beginning of the 14th century created by a direct student of Giotto. They depict the Crucifixion, San Guido and San Benedetto, and the apostles. In the refectory room, on the other hand, a cycle of frescoes attributed to a master next to Giuliano and Pietro da Rimini, or to Giovanni Baronzio, stands out in all its magnificence.

Not to forget, finally, Palazzo Della Ragione, which stands in front of the basilica and the monastery, was built in the 11th century to administer justice. Lastly, the Pomposa Museum displays the materials of the church and the entire complex, such as capitals, bass reliefs, statues, sacred objects, sketches of frescoes discovered in the diggings and interventions that were carried out over time. 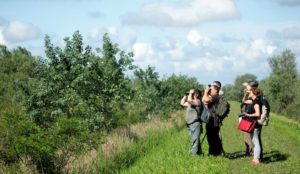