There is no other city in the world with more porticoes than Bologna: all together, and only taking into consideration the city centre, they are more than 38 km long, reaching 53 km if counting the ones outside the gates.

It’s an international record that the city has been holding with pride for more than 900 years and that today, together with its towers and its tasty tortellini – are the major elements of the identity of this city in the heart of Emilia Romagna.

High, bright, narrow and long: the porticoes of Bologna are the real parlours of the city, a metaphor of hospitality that offers a safe shelter in every season of the year to anyone who walks along them. They are meeting and social places, they are shopping alleys, and you can find clubs there as well as museums and art galleries. They are the umbrella where to take cover when it rains, but also the ideal place where to find relief from the heat during the hot summer days.

The porticoes in Bologna are one of the next candidates for becoming UNESCO World Heritage. 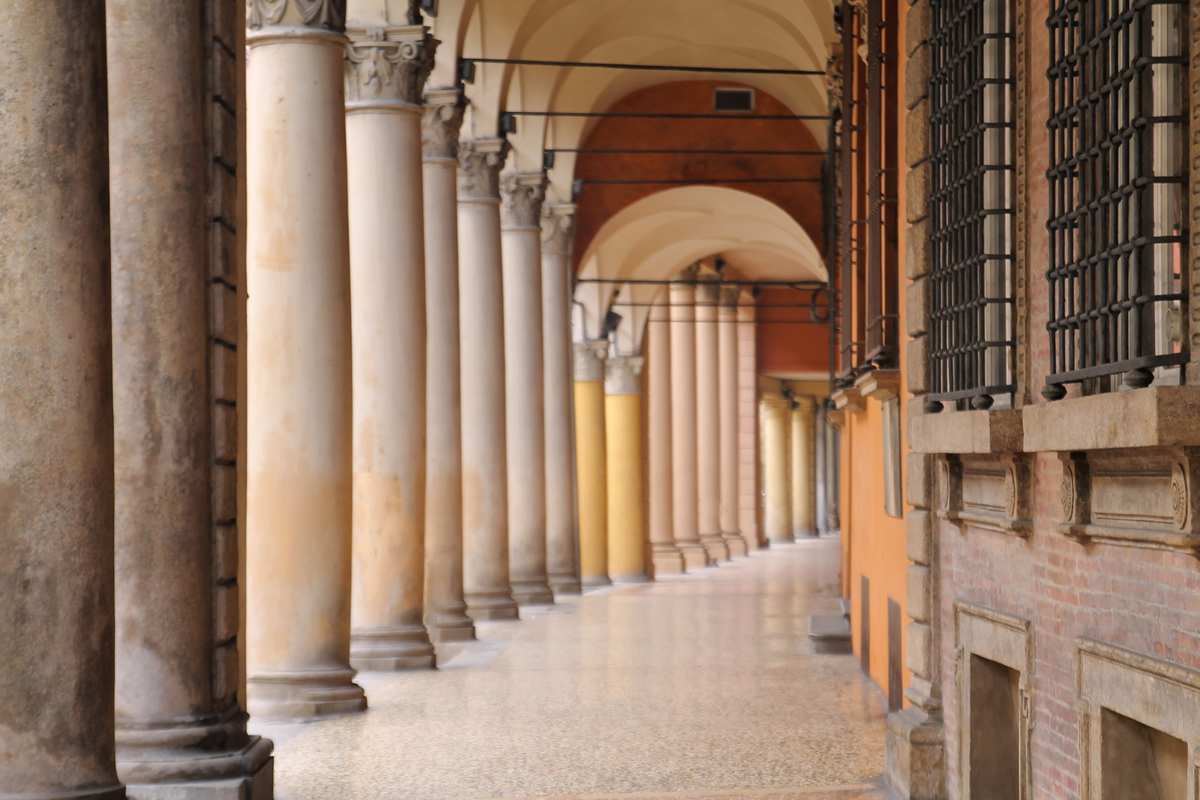 The portico of Santo Stefano, Bologna | Photo © matteo_santori, via Wikimedia

But how were the porticoes in Bologna-born?


At the base of this extraordinary architectural beauties – this seems absurd to recall – was a real unauthorized building during the Middle Ages.

Towards the end of the year 1000 (the first historical witness dates back to 1041) the people of Bologna, since they couldn’t expand their houses in their height and in their perimeter, in order to obviate these limitations, they resorted to a trick, extending the attics of their houses towards the outside.

At first, they thought of creating “sporti”, a sort of wooden terraces underpinned by the extension of the load-bearing beams of the attic; then, seeing that the volumes were growing, supports columns from below were built.

The porticoes stimulated the improvement of business and craft activities and made the ground floors more habitable since they isolated those areas from the dirt of the streets. 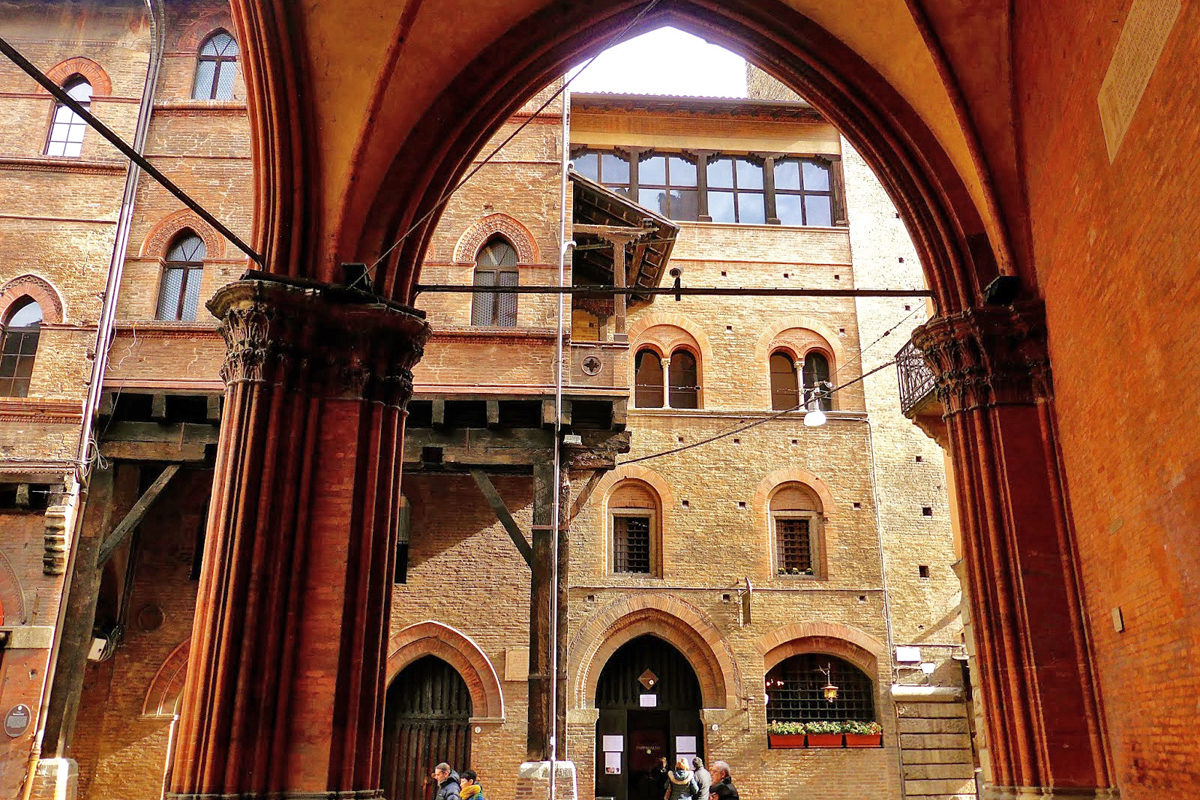 The population kept growing, due to the lure of the University and the strong migration of the county inhabitants, so the Municipality of Bologna took action and regulated this building procedure (1288 A.D.).

The regulation established that each house had to build a masonry portico respecting precise technical standards: it had to be at least 2.66 m high and likewise bright in order to allow a man on a horse to pass, even the desks of the craftsmen and sellers shouldn’t block their passage.

Not everybody respected the regulation, especially in the poorest districts, as the medieval records attest and the irregular shapes and measures of the porticoes attest still today.

Later statutes, like the one in 1352, established a greater height and depth of 3.60 m for all the new buildings and a series of rules that are respected still today.

The porticoes of Bologna today


Born without a precise regulation practice and at different times, there is no portico like another one.

Some rare medieval wooden porticoes survived to the present day. If you want to see them with your own eyes, you just have to search for the suggestive Casa Isolani along Strada Maggiore (dating back to the 13th century) or you can head to the beginning of Via Santo Stefano and admire the porticoes of Casa Reggiani-Seracchioli and Casa Azzoguidi-Rubini in Via San Niccolò. Among the still existing eight wooden porticoes in the city, the most recent one is the portico in Via Gombruti, 17 built in the 15th century.

The side portico of the Basilica of San Giacomo Maggiore in Via Zamboni; the one of Palace Bolognini-Isolani and the one of Case Beccadelli in Piazza Santo Stefano were built during the Renaissance. The arcades decorated with floral ornaments of Palazzo Podestà and the high portico “dei Bastartini” in Via D’Azeglio date back to that period too.

Built a little later, the great portico “del Pavaglione” (139 m and 30 arcades) is a long loggia that stretches from Via De’ Musei to Via Farini and towards its end, it opens onto the historical building Archiginnasio. 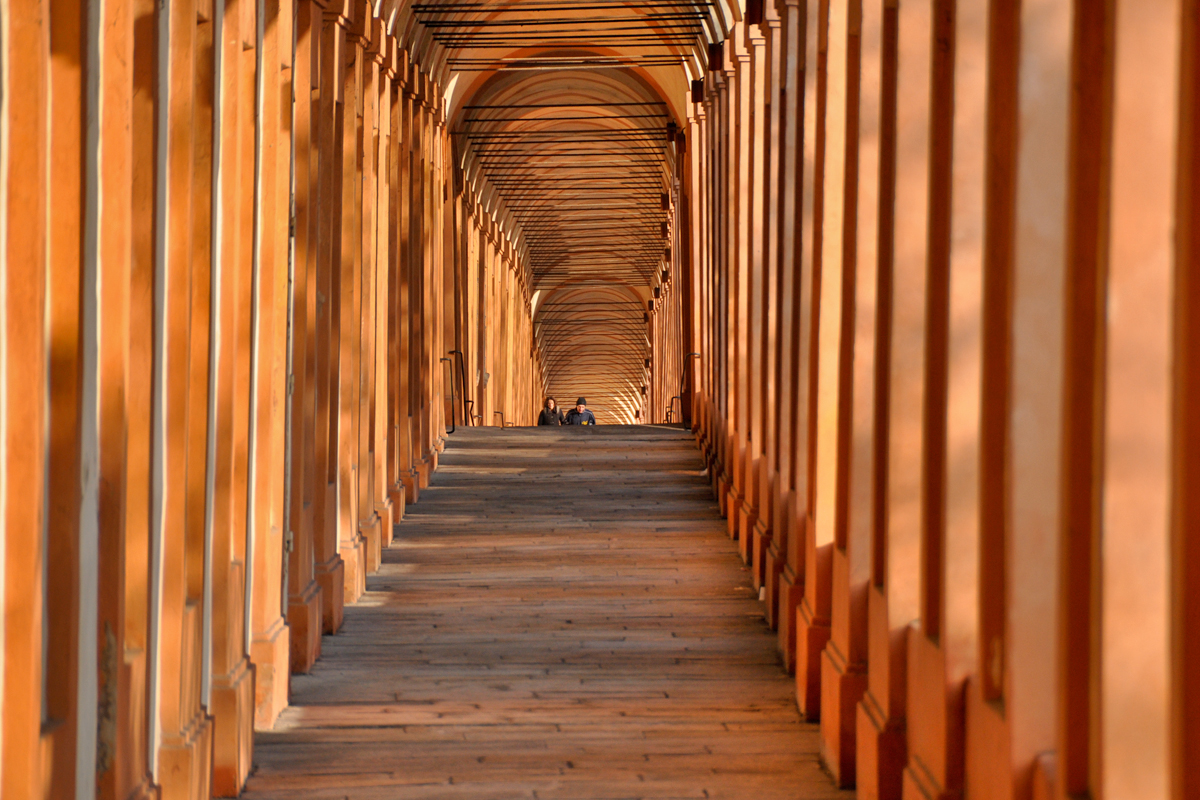 Moreover, there is the LARGEST portico, the one of the Basilica of Santa Maria Dei Servi in Strada Maggiore; the HIGHEST one of the Palace of the Bologna Archdiocese in via Altabella, which stands out with its 10 m height and the NARROWEST one in Via Senzanome, with its 95 cm of width.

Last but not least, the Portico of San Luca with its 3,796 m of length and 664 arcades is the LONGEST portico in the world. This portico is much more than a mere portico: it’s a religious symbol and a symbol for the entire city, which has been running along this long street since 1700 to pay homage to Madonna Di San Luca and at the same time to admire Bologna from above the “Guard Hill” (Colle della Guarda).