The country air, that feeling of freedom… I don’t know if you have ever travelled by car or any other mean – even on foot, of course – through the little streets of the countryside that frame the colourful flat and hilly landscape in our region.

On the horizon, you will notice, from time to time, many little churches coming into view, whose history sometimes might have gotten lost over the centuries. They are buildings of little dimensions and simple shapes, but, because of the pastoral atmosphere, they are inspiring and their charm and suggestion make anyone who sees them want to visit them.

They were a fundamental reference point for the local communities living in the surroundings and they are usually referred to with the Italian name “pievi” (from Latin plebs, which means “people”), indicating a complex of buildings with church, rectory, and sometimes a little open-air oratory. 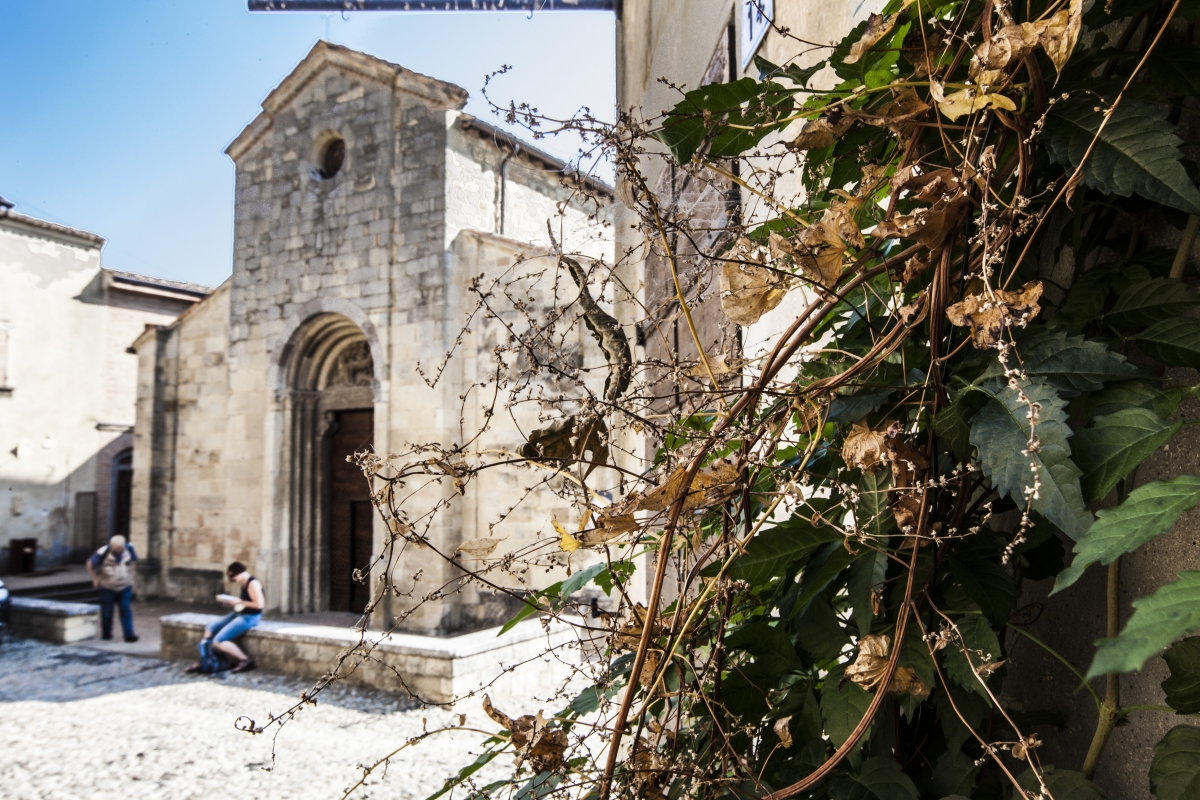 However, these churches were far more than this. Originally, they were not simple buildings: they gathered together groups of people and were real communities, organised according to specific ecclesiastical districts.

Through these groups, in fact, the Church could extend its control over the population and collect taxes and tributes or confer the ritual of baptism far from the authority of the city’s cathedral, which was the only one to be empowered to carry out this function at the beginning.

These churches were also places of justice and jurisdiction as well as promoters of initiatives for the preservation of the territory such as reclamations and canalizations. When the civil function started to falter, the religious one took hold, up to the point that the meaning of “pieve” and church blended together as a proper building.

They usually stood along the main routes or along rivers. Their period of greatest splendour dates back between the 9th and 12th century, ending towards the end of the following century.
Today, most of Northern Italy is scattered with these important historical buildings. Inside, they keep treasures and decorations that deserve to be discovered and their walls hide histories that should be unveiled.

Today, I decided to give you a short tour across the “pievi” in Emilia Romagna that particularly impressed me. It is not about charts or a contest with prizes, it is just my personal list with some of the most fascinating rural churches that I would suggest my friends and acquaintances visit during their stay or on a trip in the Emilia Romagna’s countryside.

Does the list, in your opinion, should include other buildings? Then, just tell me in the comments below! We would be glad to add them.

We are in Brisighella, near Ravenna, in one of the most beautiful medieval villages in Italy. Overpassing the city centre, down the State Highway 302 toward Tuscany, after about 1km, you will reach the little parish church of San Giovanni Battista: it’s a touching place for its great simplicity and beauty.

Maybe it’s the olive groves and the sound of the waters of river Lamone, or maybe the beauty of the vineyards and of the farmed fields – anyway – a sudden look is enough to realise that this is a very special place.

The parish church raises in correspondence with the eighth mile of Via Faentina, the Roman street that connected Faenza and Florence. It’s for this reason that it is still referred to as “Pieve in San Giovanni in Ottavo”, where “Ottavo” means “the eighth”.

Without any doubts, it is one of the most important monuments in the entire region as well as one of the best preserved Romanesque churches.
An old vulgate claims that the building was built by Empress Galla Placidia, but in reality, it was built later, between the 8th and 10th century, even though in the surroundings many ruins of Roman structures were found.

Destination of very old pilgrimages, it saves many surprises to its visitors: recycled capitals, which are all different from one another, little single lancet windows, decoration items of earthenware tiles and a crypt built as an oratory with many archaeological findings discovered during some renovation works carried out inside.

Along the road that from Ravenna arrives in Bologna, let’s stop in the historical village of Bagnacavallo. Not far from the city centre, you will find one of the most interesting parish churches in the whole province of Ravenna: Pieve San Pietro in Sylvis.

It is considered the best example of parish church for the completeness of its architecture and decorations, and it features still today the original setting of a traditional three naves-basilica and an imposing brick-façade that seems to recall all the other churches of Ravenna, as for instance, the Basilica of Sant’Apollinare in Classe. 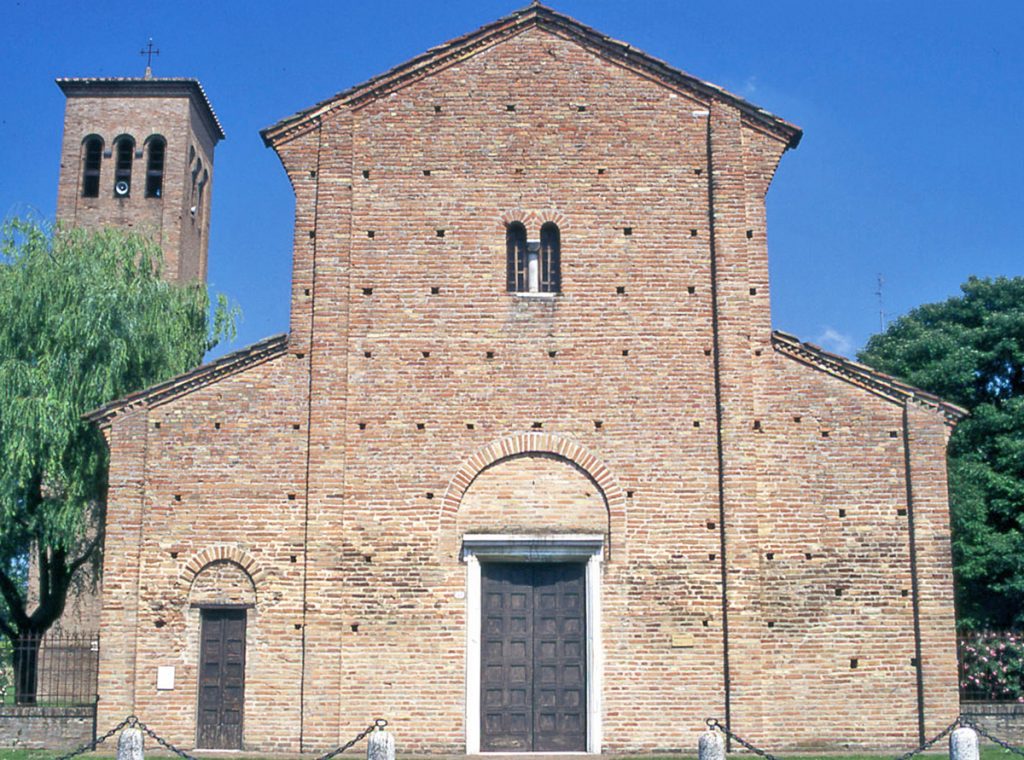 The most credible dating is 740-744 but the similarity with major models of Ravenna architecture make date them back later in time, to the 6th century.
It is likely that more than 700 years ago, however, Dante Alighieri himself, who mentions Bagnacavallo in his Divine Comedy, said a prayer here.

Apart from the many decoration items of the High Middle Ages tradition that run through the whole building, the marble altar dating back to the 6th century stands out, together with the remarkable frescoes of the conch dating back around 1320, presumably painted by Pietro da Rimini. Further frescoes at the entrance, instead, are attributed to the school of Ferrara (15th century).

Along with Francis’s Walk that connects Rimini to the sanctuary de La Verna, nestled between the Aretian hills, you bump into San Leo that, like Brisighella, is one of the most suggestive hamlets in Italy.

Suspended on a spur overlooking Val Marecchia, the little residential area hides two important Romantic monuments that leap out as soon as you enter the village: on one side the parish church of Santa Maria Assunta dating back to the 9th century, on the other the Cathedral, dating back to the late 12th century. 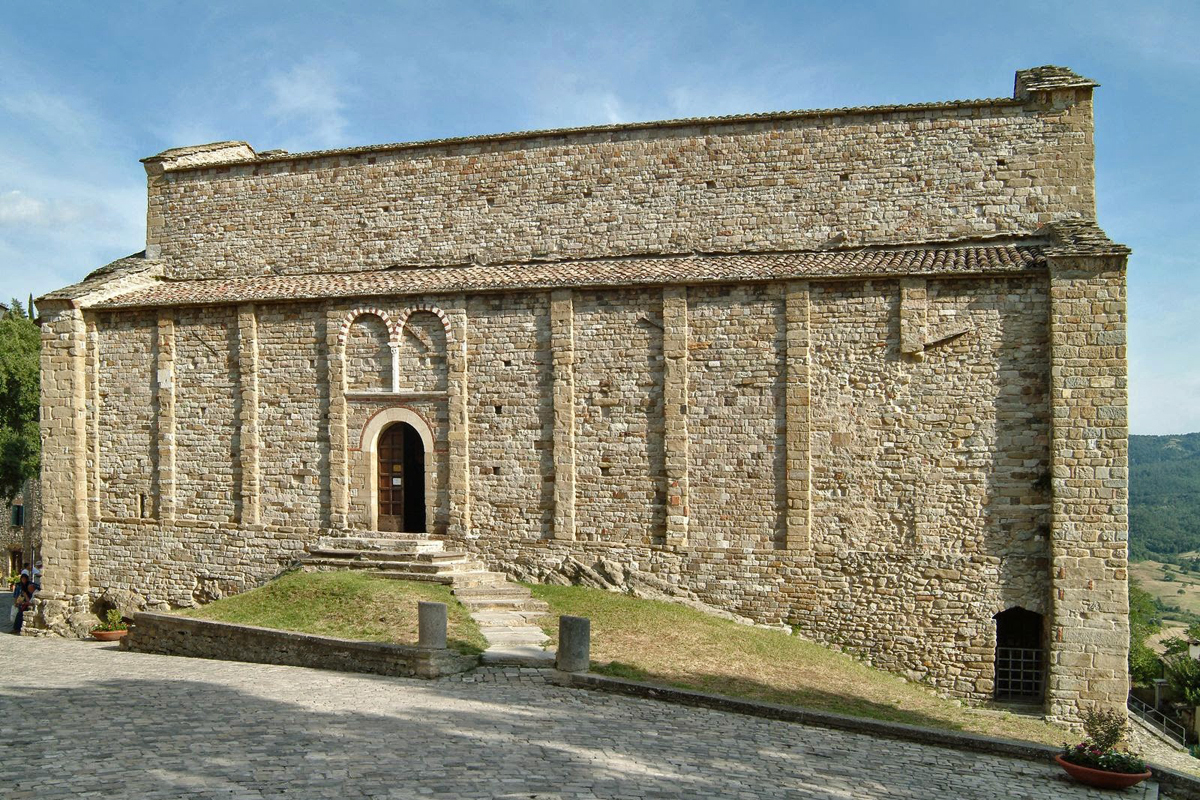 The parish church of Santa Maria Assunta is the oldest building in San Leo, as well as the oldest religious monument in the historic region of Montefeltro. Built in sandstone and limestone during the Carolingian period, it was erected – according to tradition – over the small cella where San Leone, Patron Saint of San Leo, retired to prayer.

The interior of the basilica is divided into three naves. It appears bare but at the same time extremely fascinating thanks to the rhythmic cadences of the stone blocks that make up the walls. Roman or late-antique Capitals, columns and elements of reuse enrich the church. At the center of the presbytery stand a precious ciborium (882 AD), which an inscription reads dedicated by the Duke Orso to the Virgin.

Once the interior walls were plastered and largely decorated with paintings and frescoes, whose traces have unfortunately been canceled by radical restorations carried out during the 30s of the last century.

Solitary, on the top of a hill, the little parish church of Santa Maria di Castello stands above the village of Toano. We are in the heart of the “Terre Matildiche”, the group of territories ruled by the Countess Matilda of Tuscany.

It is considered one of the most important monuments of Romanesque architecture in the territory and it is one of the oldest places of worship of the entire diocese of the area of Reggio Emilia. There are not many informations about its foundation, but it already existed in 980 A.D. 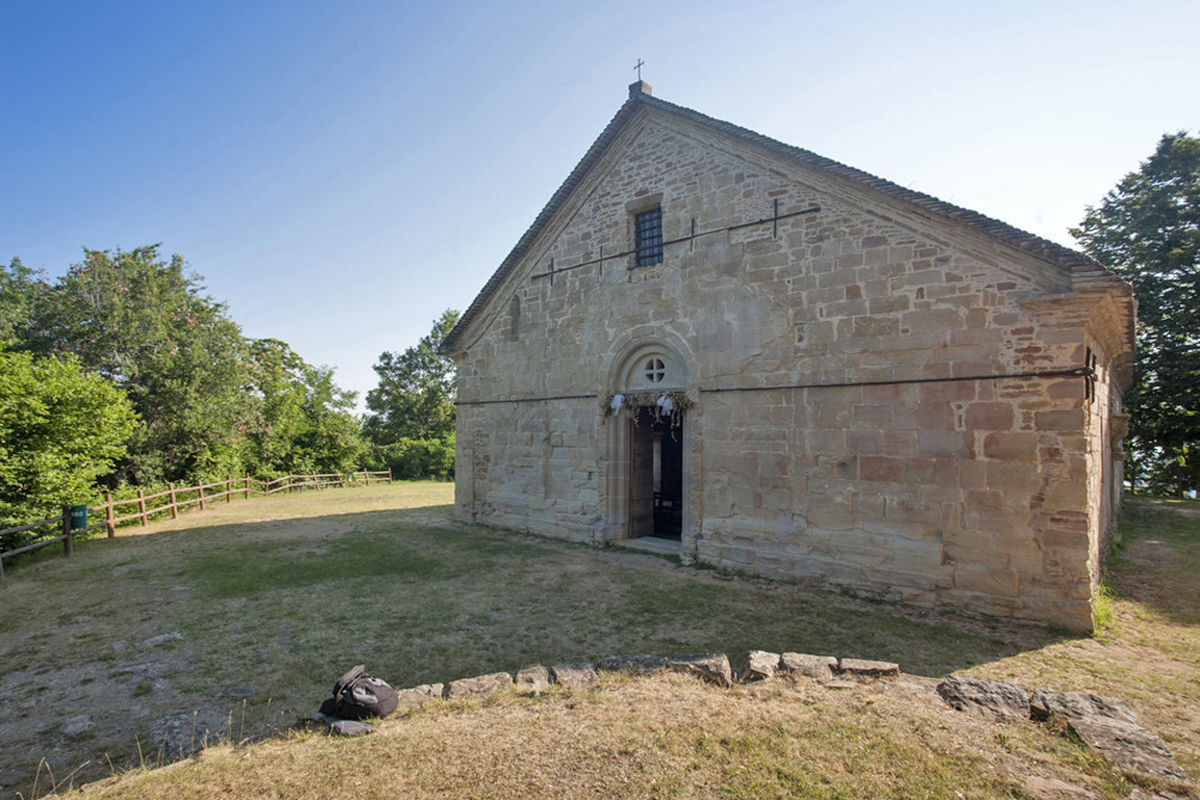 Despite the several rebuilding-works and the destruction following the Second World War, the building preserved a typical Romanesque-Lombard look that recalls the cathedrals of Parma and Modena.

The outside, like the inside, is marked by naked spaces and features thick and tough lines, typical of the oldest Romanesque buildings. The church, moreover, features the typical three nave-setting but showing uncommon details in the capitals that crown the pillars and semi-pillars. All of them are decorated with religious and liturgical symbols with vegetals, geometrical, zoomorphic and anthropomorphic motifs, creating an interesting mix between Byzantine art, ars canusina and sculpture of the Antelami’s school

In Sala Bolognese, 20 km north of Bologna, you will see one of the most suggestive Romanesque-Lombard buildings of the entire province: it is the parish church of Santa Maria Annunziata e San Biagio, a very old building built in 1096 A.D. over another pre-existing Late Christian building.

With a cathedral plan, it features a façade with a mullioned window with cubic-shaped capital on the back and a blind gallery dating back to the 12th century, which is the unique example in the entire territory of Bologna. 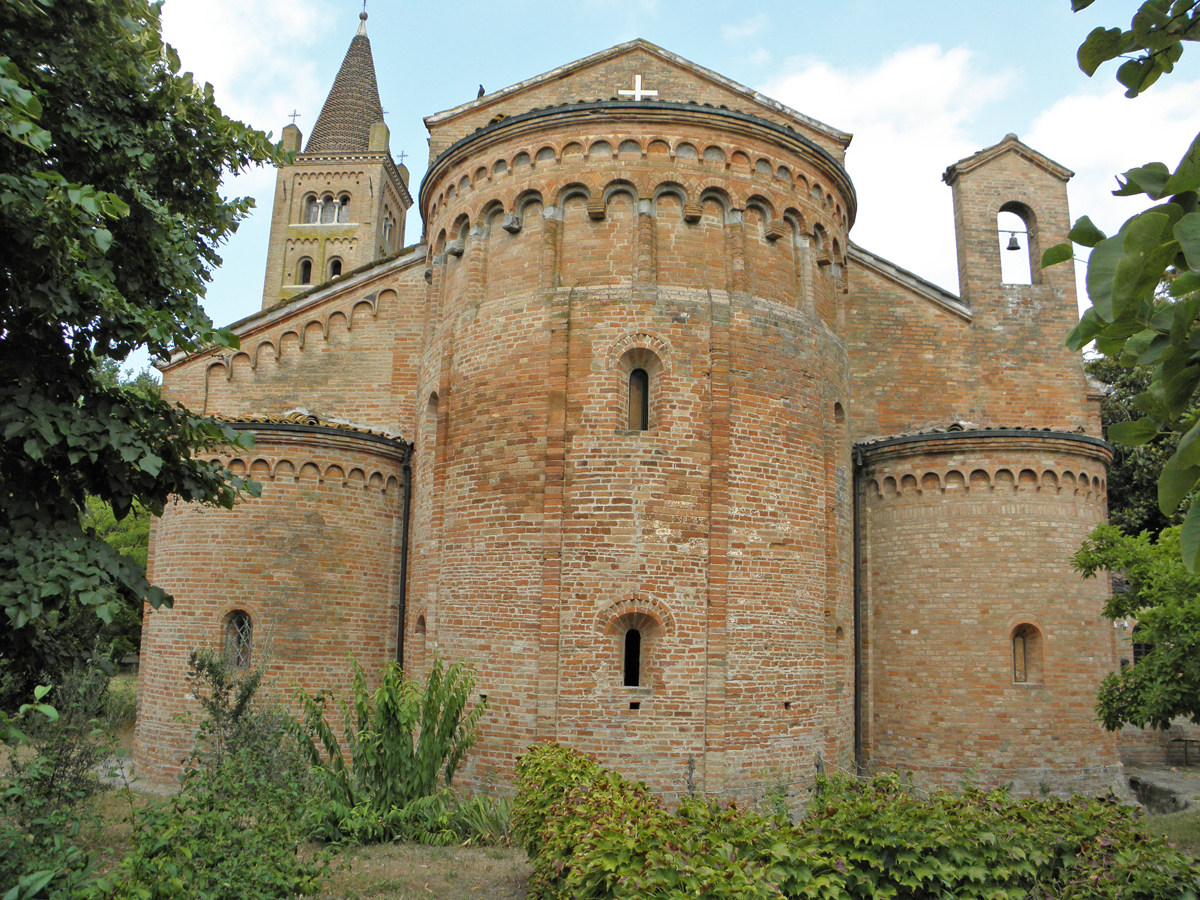 The inside of the church, divided into three naves and separated by columns with selenite-capitals, directs the visitor’s attention on the wide central staircase of the presbytery, on which the main altar stands. On the altar is sculpted the head of a pagan god with ham’s horns that testifies the end of the pagan period and the passage to the one of Christianity witnessed by the local population of that time. The central part of the ambo with the seal of the Swabian Empire eagle is of remarkable beauty.