To discover the origins of the Romea Nonantolana Way, we have to go back to the 7th century. The northern part of the Italian peninsula was divided between the territories conquered by the Byzantines and those belonging to the Longobards. At that time, due to the conflicts between the two kingdoms, the two main communication routes with the rest of Italy (Via Flaminia and Via Emilia) were occupied in various areas by the two opposing armies, which made it difficult to cross them towards the north and south of Italy.

The Longobards in particular needed safe routes of communication far from the Byzantine outposts. In 749, therefore, under the reign of King Aistulf, the Longobards reorganised the road network within their possessions by founding a monastery and a Benedictine hospice near Sestola and Fanano, which at the time were essential structures for supporting travellers near the Apennine ridges.

A few years later, in 752, Aistulf’s brother Anselm founded another monastery in Nonantola, for religious but mostly political and military reasons, namely to control the plains and to mark the borders of the Longobard Kingdom with the establishment of a monastic structure.

Nonantola and its monastery thus became the new centre of the road system linking the two monasteries, the one on the plain and the one in the mountains. The road connecting them took the name of Romea Nonantolana Way a route which over time was travelled by militia and royal courts, pilgrims on their way to Rome and trade caravans.

With the fall of Nonantola and the rise of the neighbouring powers of Modena and Bologna, the Via Nonantolana lost its importance and slowly headed towards decline with the fragmentation of the original route.
The Romea Nonantolana Way is now part of the European Walks project, a European historical, cultural and tourist network.

The Way runs from the north-east of Italy to Rome and has two distinct routes: the western route and the eastern route, on opposite sides of the River Panaro. Both start in Nonantola and meet in Fanano before continuing towards the Apennines and all the way to Rome.

The Romea Nonantolana Way runs through some of the loveliest little towns in the area, such as Fanano, a village set in the High Modena Apennines Regional Park and renowned for its outdoor activities, from walking and mountain biking in the summer months to skiing and snowshoeing in winter.
Fanano is also a good base for tackling Mount Cimone, the highest peak in the northern Apennines (2,165 mt). 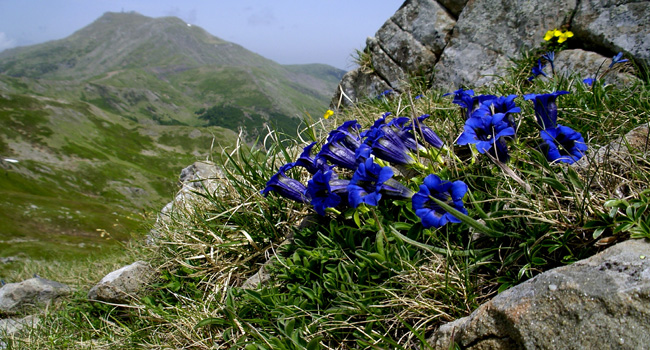 The Nonantolana Way is 65 miles long, and it is almost entirely set in the valleys of the Modena area in Emilia-Romagna; its 6 stages are suitable for walkers, bikers or horse riders.
The official website of Italy’s historic walks describes the individual stages and the accommodation facilities and points of interest along the route.

Stage 1 | Nonantola – Modena (9.6 miles)
The first stage brings you from the monumental Abbey of Nonantola to Modena and its UNESCO-listed cathedral along quiet lanes and city-center cycleways.
Stage 2 | Modena – Castelvetro (12.7 miles)
The next stage runs along the cycle route created on the old Modena–Vignola rail track and the River Guerro cycleway through landscapes dotted with vineyards.
Stage 3 | Castelvetro – Coscogno (13 miles)
After passing the picturesque village of Levizzano Rangone, the route climbs up the Guerro stream to reach Monte delle Tre Croci, an enchanting place with a magnificent view, and then passes through the villages of Denzano and Ospitaletto.
Stage 4 | Coscogno – Pavullo nel Frignano (9.3 miles)
Near Pavullo nel Frignano, the monumental Montecuccolo castle is surrounded by a medieval hamlet and is home to a major art and natural-history museum.
Stage 5 | Pavullo nel Frignano – Fanano (11.5 miles)
The fifth stage crosses the valley of the Scoltenna stream to reach the town of Fanano, passing through the characteristic medieval village of Renno di Sopra, the parish church of San Giovanni Battista in Renno and the village of Rocchetta Sandri.
Stage 6 | Fanano – Croce Arcana pass (8 miles)
The final stage follows the River Ospitale valley up to the historic Croce Arcana pass at an altitude of 1675 m. The stretch from Fanano to Ospitale runs along ancient paths, offering evocative sights of the river. Past Ospitale town, you gradually climb up to the high pastures with grand views over the valleys of Emilia and (after the pass) Tuscany.

Stage 1 | Nonantola – Spilamberto (13.4 miles)
The first leg takes you along dirt roads and bike paths into the center of Spilamberto, home of the Traditional Balsamic Vinegar of Modena consortium.
Stage 2 | Spilamberto – Vignola (5 miles)
This stage follows a nature trail along the River Panaro all the way to Vignola, a town known for its cherries. Its iconic castle is majestic and is one of the finest pieces of fortified architecture in the region.
Stage 3 | Vignola – Samone (12.4 miles)
Leg 3 runs through the heart of Sassi di Roccamalatina Park. It starts out along a nature trail by the River Panaro up to the town of Casona and then crosses the river, proceeding along narrow paths up to Trebbio church, passing the park’s landmark sandstone peaks, finishing in the town of Samone.
Stage 4 | Samone – Montese (11.5 miles)
The next stretch takes you to Montese via the peaks of the Riva mountains, the lovely little town of Montalbano, and along CAI trail numbers 400, 434 and 440.
Stage 5 | Montese – Fanano (14 miles)
The long and challenging fifth stage passes through the small towns of Maserno, Castelluccio, Rocca Corneta and Trignano on the way to Fanano. The beautiful view stretching out from Mount Croce near Castelluccio is worth the effort, and the stretch from Rocca Corneta to Trignano with River Dardagna on your right is also beautiful.
Stage 6 | Fanano – Croce Arcana pass (8 miles)
The final stage is the same for both routes

Length: Both the eastern and western routes are 64 miles long.
Difficulty: medium