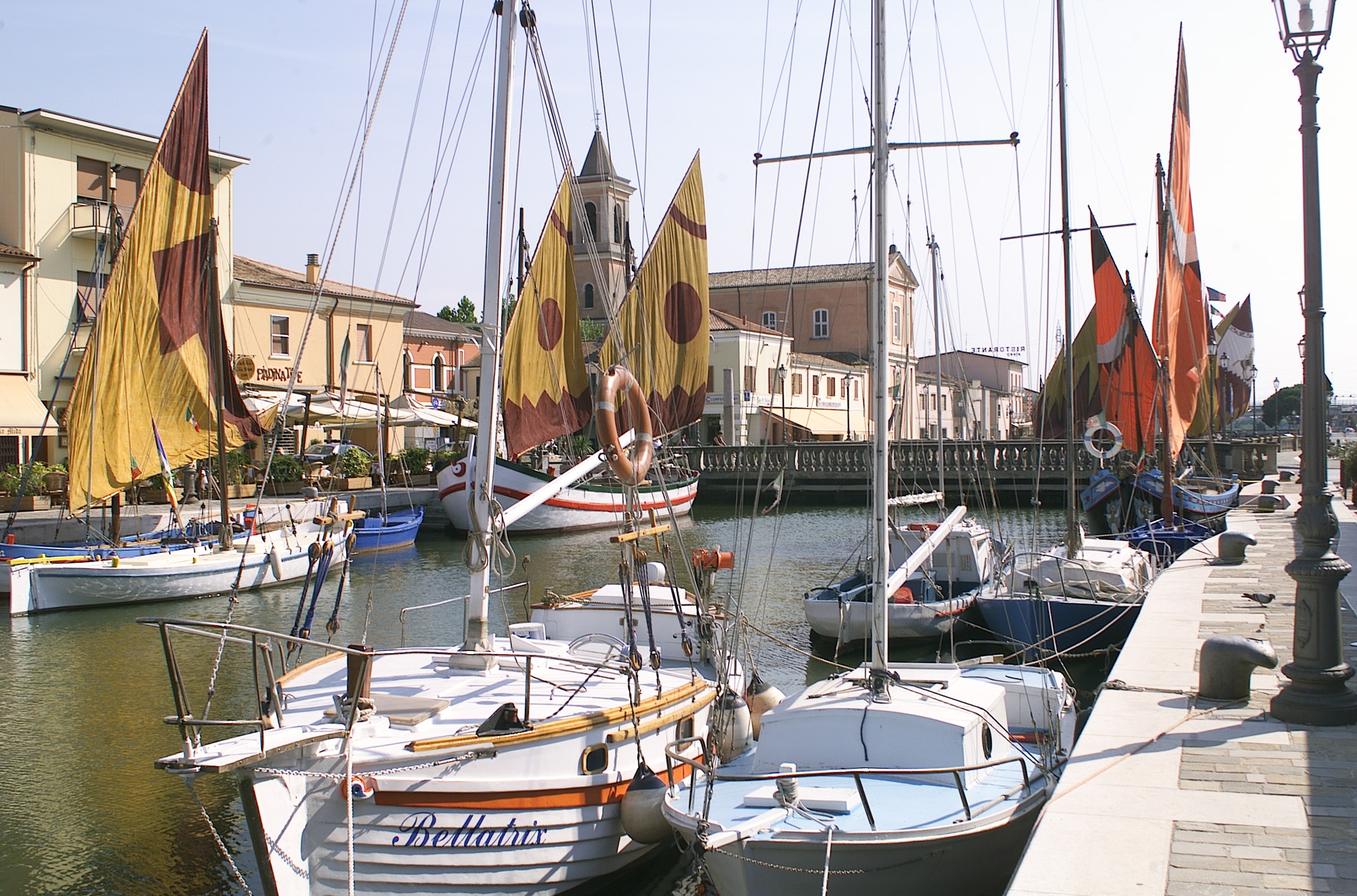 Emilia Romagna boasts the presence of many curious museums that can combine culture with fun, curiosity and passion with tradition. Thanks to these collections, tourists can get to know more closely the realities of the territory, its excellence, but also the entrepreneurial and artistic skills of those who live there. Almost all museums can be visited free of charge or for a small fee.


The first stop of this route is Cesenatico, home of the Maritime Museum. It is a unique museum in Italy, consisting of a floating outdoor section with 10 traditional boats from the upper and middle Adriatic Sea (which in summer and good weather hoist their sails decorated with natural terrain and symbols of the local families of fishermen) and a section on land, inside, dedicated to traditional boats. In 2017, the Museum was awarded the Icom Italia Prize by the Italian section of the International Council of Museums, the organisation that brings together museums from all over the world. The prize is dedicated to museums that have committed themselves on becoming more attractive and innovative in their relations with visitors and the territory, with close national and international connections. The Maritime Museum of Cesenatico is now among the top ten museums in Italy since it has become “a centre of interpretation of the territory and the coastal landscape”. On the ground side, you can admire a fully equipped bungee and bragozzo, a nineteenth-century workshop of naval carpentry acquired in bulk and rearranged inside the museum, ancient and modern anchors and a section dedicated to the evolution of sailing equipment. The museum was originally designed by Leonardo da Vinci, in 1502. It is located on the canal harbour and offers educational visits for schoolchildren, a sailing and historical sailing school and can be visited by booking, otherwise opening on Saturdays, Sundays and public holidays.


In Sogliano al Rubicone (province of Forlì-Cesena) it is worth visiting the Vintage Record Museum. It consists of a collection of records, matrices, gramophones and cds that tell 130 years of sound recording history. From the old 78 laps (or disks in shellac), today precious collector’s items, to the subsequent microgrooves, completed at the end of the Second World War but spread from the 1950s, to the most recent innovations. This particular exhibition also boasts an important collection of historical voices: those of Edward VII, Stalin, Umberto I, Vittorio Emanuele II, Hitler, Mussolini and others. The Museum is open every Sunday, otherwise it can be visited by reservation, always with free admission.


In the wonderful eighteenth-century Villa Silvia, near Cesena, we find the Museum of Mechanical Music which, in seven rooms, offers a real journey through time: here the mechanical instruments are inserted in their context, thanks to the faithful reproduction of the environments and places of the various eras. This way, we can find in a war tent of the’ 500 the mechanical drum designed by Leonardo da Vinci!
In other rooms there are small tobacconists equipped with tiny music boxes, small mechanizedaxes, but also mechanical instruments that populated the houses of the upper middle class from the eighteenth century to the twentieth century, including the melodic piano Racca, which belonged to Queen Margherita.
It then goes on to the streets, where the instruments of the questing or those who performed and sang the arias of the most popular songs in that period resounded, and then sell the lyrics to passers-by. It also exhibits organs from fairs and public places. The entrance fee is 4 Euros and includes a guided tour (which also touches the room of Giosuè Carducci, who spent his last days in Villa Silvia) on Saturdays, Sundays and public holidays.


Visiting the Musa, the Salt Museum of Cervia, will take you through the history of a city that transformed its economy based on salt production into a tourist destination. In the museum stand out images of families working in the salt-pans, special tools, but also texts and videos on uses, legends and traditions related to the Salinara civilization. The structural transformation of the saline occurred in the 1950s with the transition from artisanal to mechanized production.
In the museum, set up inside the Magazzino del sale “Torre”, there is also an iron boat with flat keel (called “burchiella”) used until the 60s for transporting the salt and special section that offers an archaeological reflection on the origins of the territory, exhibiting fascinating finds.
The Musa is open all year round and the entrance costs 2 euros.


Moving further north from Cervia, to the famous Milano Marittima, tourists’ destination from all over Italy and Europe during summer. We recommend you visit the House of Butterflies, an educational park for the conservation of animal and plant biodiversity immersed in the coastal pinewood, which also houses a pavilion dedicated to insects of the world. It is an experiential route open to adults and children, through a greenhouse of over 500 square meters surrounded by the flight of hundreds of beautiful butterflies with spectacular and vivid colours
The museum is usually open from March to November, with entrance fee.


Those who visit the Upper Valmarecchia and want to discover a truly original place cannot miss Sulphur, the Historical Mineral Museum of Perticara, in the province of Rimini. This is one of the first significant examples of industrial archaeology in Italy. Since 2002, the actual museum spaces have been located inside the former Sulfureo Certino building site, while outside the Vittoria well still dominates the landscape on Perticara, acting as a symbolic link between the country and the great “underground city”.
The former power station, the compressor room, lampisteria (the place where the lamps and flammable materials were kept) and the workshops have now given way to a museum that explores the themes of mineralogy and geology of the territory, with a focus on mining activity carried out for centuries in Perticara, marking the life of entire generations and the territory itself.
In 1936, the world’s largest sulphur crystal, weighing about 5 kg, was extracted from the Perticara mine and today conserved at the Natural History Museum in Milan. In 1938 the Perticara plant reached its peak in 1938 with the production of crude sulphur that reached 50,000 tons and the employment of more than 1600 employees. The mine was then closed in 1964.


For the sea lovers and its “inhabitants” in Bellaria Igea Marina there is the Shells Museum which is located in the Saracen Tower built in 1763. It includes a rich display of shells and molluscs and a vast collection of skeletons of marine organisms: madrepores, echinoderms, large crustaceans, shellfish and turtle shells. The exhibits, coming from all over the world, constitute a remarkable natural heritage.
On the ground floor of the Tower, during the whole summer, there are also temporary exhibitions of painting and photography, while in the park of the Museum you can admire an evocative display of sails with the colors of the seafaring families, as well as some “batanicci”, small vintage boats used for daily fishing and family subsistence.
The museum is open from June to September, every day except Monday, with free admission.


It is a real art gallery, but instead of the paintings there are…. buttons! Yes, because in Santarcangelo di Romagna, in the province of Rimini, Giorgio Gallavotti collected and framed 8500 buttons displaying them in sections: the history of 1900; the materials and their transformation; the buttons of 1700 and 1800; curiosities from the world.
Gallavotti was the owner of an old haberdashery, opened by his father in 1929. In 1996 he began to exhibit his work and in 2008 opened the Button Museum, in Via della Costa 11.
In 2016, two very special buttons arrived at the museum: they both travelled in space: the first one was sent by the astronaut Luca Parmitano, while the second is what Samantha Cristoforetti had in his pole during the mission with the International Space Station.
The Santarcangelo Museum also displays Japanese buttons from the nineteenth century and what Picasso designed for Coco Chanel. This particular museum can be visited from Tuesday to Sunday with free admission.

Discover also the Curious Museums in Emilia and in Bologna and surroundings.