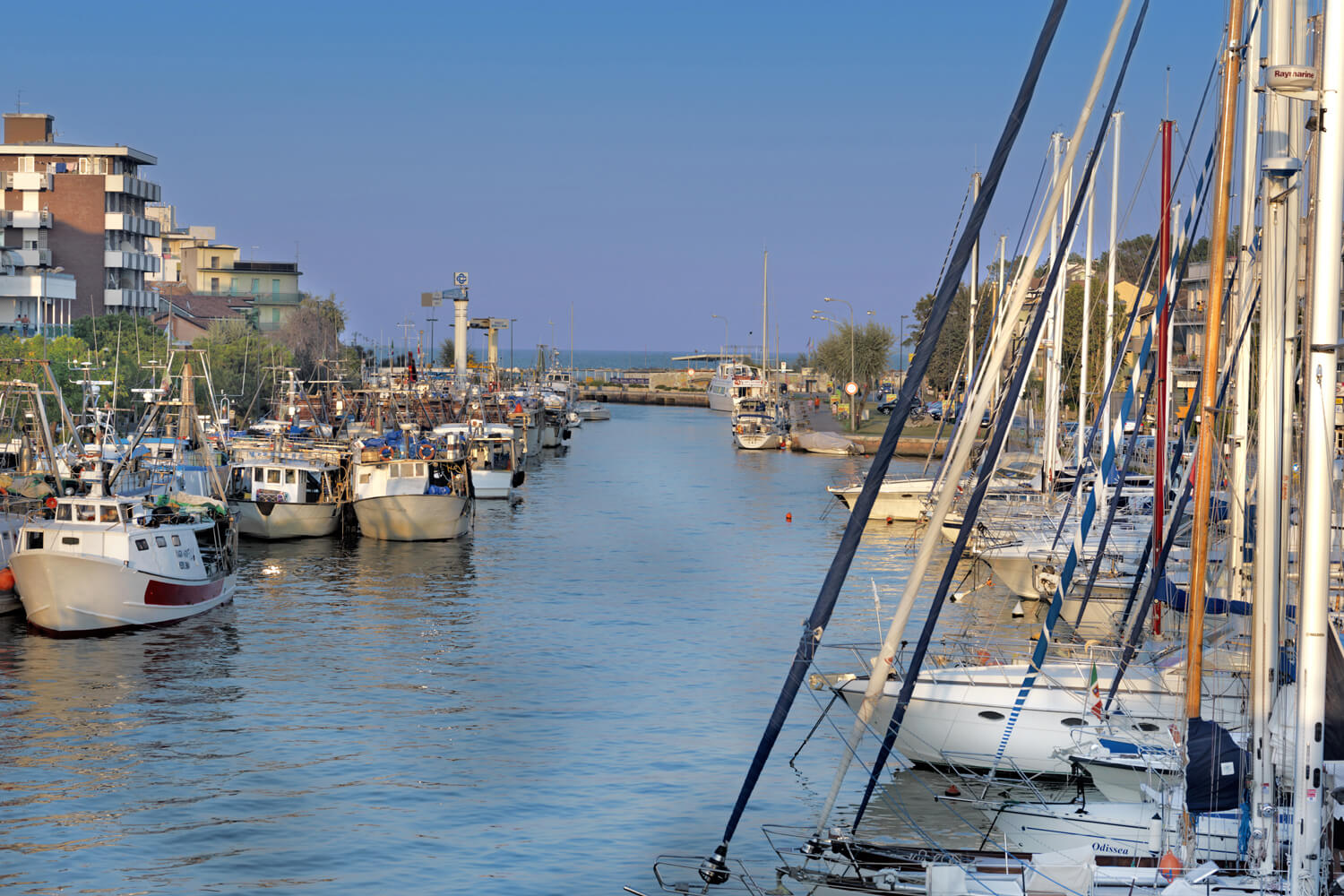 The coastal towns of Emilia-Romagna are the soul of the maritime tradition of the region and of the North Adriatic Sea. In the past, they were important trade hubs between the Italian peninsula and the peoples of the East.

Bellaria-Igea Marina, Borgo San Giuliano, Cattolica, Cervia, Cesenatico and Comacchio: these are the 6 Coastal Towns of Emilia-Romagna where the art of fishing, the knowledge of the sea and marine navigation have reached their peak.

Comacchio is a small village in the province of Ferrara, located in the middle of the lagoon of the same name, between Po di Volano and Po di Comacchio. It was originally built by joining 13 small islands that formed at the mouth of the Po di Primario.

Before being silted up due to its proximity to the mouth of the River Po, over the centuries it was an important naval port in the Adriatic Sea and one of the main ports for trade in Emilia Romagna.

From its glorious past, the city today preserves beautiful architecture and buildings of great value, as well as the characteristic canals that have earned it the nickname “Little Venice”.

Perhaps one of the oldest settlements on the Romagna coast, the town of Cervia in ancient times was not where it stands today.

The first settlements were in fact established further inland, probably for defensive reasons in what were once marshy areas near the Adriatic Sea.

Because of this particular location, over the centuries the local population became very skilled in hydraulic engineering and in the reclamation of the marshes, which cemented the social, cultural and economic identity of the town.

This town has always been industrious: in the 9th century the village was already able to guarantee a flourishing economy for its inhabitants thanks to the salt production and trade industry, which could count on an excellent road network towards the inland and an efficient port towards more distant countries.

Such opulence could not fail to arouse the envy of the neighbouring potentates, so much so that the town was at the centre of serious conflicts with the neighbouring Signorie, until the arrival of the Most Serene Republic of Venice first and then of the Papal State.

In 1697, after numerous requests to the then Pope Innocent XII, the population was granted permission to literally move the town from the original area (roughly where the salt pans are today) to a healthier place near the sea.

In the same period, the Salt Warehouse and the Defense Tower were built, which we can still admire today.

Cesenatico: the fortress of the Adriatic

At the time of ancient Rome, the coastline was much further back than it is today and the strip of land on which the village of Cesenatico stands nowadays was largely occupied by the Adriatic Sea.

A small village stood in the place of the city, but it was no more than a small stop-over along the route of the ancient Via Popilia which led from the northeast of Italy to the Via Flaminia first and then to Rome.

The village of Cesenatico as we know it today was founded in 1303, when the Municipality of Cesena decided to equip itself with an outlet to the sea, and began the construction of a small fortified port with a castle.

The construction of a fortified military post on the coast of Romagna alerted the quarrelsome neighbouring Signorie (Ravenna, Forlì and Rimini) so much so that the settlement was destroyed and rebuilt several times during the bloody wars that ensued.

In 1500, when Cesare Borgia conquered the city of Cesena, Cesenatico became a strategic place, so much so that in 1502 the lord summoned Leonardo Da Vinci, who designed a series of improvements and variations that were subsequently adopted, making the port a safe haven even from a strategic-military point of view, as was demonstrated during the Napoleonic period.

After the collapse of the Borgia domination, the city passed briefly under the rule of the Venetians, then to the Holy See. For over three centuries there weren’t any other major events, except for when Giuseppe Garibaldi boarded the famous “bragozzi” in 1849. The general, after returning from the defence of Rome and leaving San Marino, tried to run to the rescue of Venice in the company of Anita, Ugo Bassi and other patriots.

Bellaria Igea Marina: the Village of the fishermen

The old stories tell that the name Bellaria is due to an exclamation of Pope Gregory XII who, in 1414, as a guest of Carlo Malatesta, after breathing in the salty air coming from the sea and from the green, perfumed marine woods, said: “Oh, what a beautiful air – Oh che Bell’aere“, thus giving the name to the place.

In truth, scholars teach us that the name “Bellaria” predates this episode: in fact, as early as 1311 a Malatesta will mentioned “Bellaere” as a fortified residence in the area near the church of Santa Margherita in Bellaria Monte.

The small village was particularly important at the time for the Lords and for the Papal State.

Placed at the mouth of the river Uso, this small settlement of fishermen was in fact an easy prey and an easy landing for the frequent raids of the Saracen pirates, so that it became necessary to provide the village with a Watchtower, called the Saracen Tower.

An ancient seaside resort and a holiday destination since 1900, today Bellaria Igea Marina is a charming, modern town that still maintains its human-scale style of life.

It is recognized as an ideal holiday location for the friendliness of its inhabitants, and for being a strategic starting point to visit world-famous art cities such as Ravenna, Ferrara, Venice, Rimini, Urbino, and Florence.

Borgo San Giuliano: the maritime tradition of the Adriatic Sea

Borgo San Giuliano is one of the villages that gave life to the city of Rimini and was once the place where the fishermen and local artisans lived.

Born around 1000 A.D. near the mouth of the river Marecchia, it was accessed crossing the ancient Tiberius Bridge to the north.

Its narrow streets and its houses stacked one on top of the other were certainly the result of chaotic and spontaneous growth, but as in all seaside villages, they were a formidable barrier from the strong sea winds, especially during the harsh autumns and winters.

Recognised as a dodgy place until the second half of the twentieth century, it is now experiencing a period of rebirth thanks to the people of Rimini who, through initiatives such as the Feste de Borg, bring these streets back to their ancient tradition every year.

In 1994 with the death of Federico Fellini, the walls of the houses of San Giuliano became canvas for paintings that portray the scenes from his most famous films, making the walk through the alleys of this village a unique experience..

Cattolica: the last station on Via Flaminia

Cattolica is the only coastal town in Emilia-Romagna that has a certain foundation date: August 16th, 1271.

As the story goes, when the inhabitants of the Castle of Focara decided to submit to the Malatesta municipality of Rimini, they set up a new settlement by the sea “que vocetur Catholica“, hence the name Cattolica.

There was already a settlement here in Roman times, which was essentially just a stop-over along the ancient Via Flaminia, although quite developed from an economic point of view, due to thefrequent transit of caravans and travelers to Rome and to the near sanctuary of Loreto.

According to historians there were about twenty taverns in the town centrein 1500 A.D.
The city of Cattolica has never abandoned its vocation for hospitality so much so that it is still renowned for it nowadays.

Once the period of the Saracen pirates had passed, the town began to expand its economy to include fishing and tourism, becoming one of Italy’s major seaside tourism centres in the 20th century, also thanks to the construction of the Bologna-Ancona railway in 1861 which made it easily accessible. 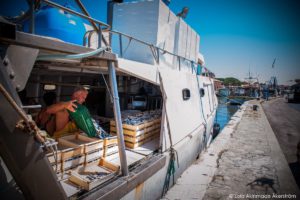 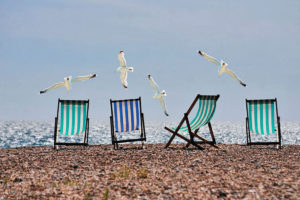 The Winter Sea in Emilia-Romagna

The Winter Sea in Emilia-Romagna