Perhaps not everyone knows that the Apennines of Reggio Emilia in the central centuries of the Middle Ages lived an era of great splendor. Right here, in fact, around the year 1000 the famous Countess Matilde di Canossa placed the political and military center of her fiefdom, a territory extended from Lombardy to Tuscany, up to the borders with the Papal States.

In these places some of the most important historical episodes of the time took place, such as the humiliation of Enrico IV in 1077 at the Canossa Castle (from which the phrase “go to Canossa” was born in reference to those who humiliate themselves or admit a mistake), the victory against the imperial army of the same Enrico IV in 1092, victory due also to the strategic network of castles, fortresses and fortified villages present in the Val d’Enza affiliated to Matilde, and her coronation as vice-queen of Italy by Enrico V at the Bianello Castle in 1111.

What we propose is therefore an itinerary of 5 castles perched on the hills of Reggio Emilia that witnessed these important historical events: places that preserve the memory of an ancient time and which are still able to surprise the visitor today thanks to the spectacular landscapes from which they are surrounded.

Starting from the castle closest to the city of Reggio Emilia, the first stop on our itinerary is the Castle of Bianello, in the municipality of Quattro Castella.
Built on a natural balcony in the first hills of the Reggio Emilia Apennines, from which you can enjoy a breathtaking view, this castle is the only survivor of the four located on the hills that give the municipal territory its name (Quattro Castella means “four castles”). The area is located within a 160-hectare protected natural oasis.

Here Matilde lived almost habitually and here she hosted Henry IV penitent, before the humiliation that took place in Canossa in 1077. Here popes and princes stayed and always here in 1111 Matilde received Henry V and was proclaimed by him imperial vicar (vice-queen) of Italy.

After Matilde’s death, the castle underwent numerous transformations, which made it a stately home with frescoes, ballrooms and reception rooms. However, it also preserves interesting structures of the primitive fortress and, in one room, a 14th-century painting representing Matilde holding the pomegranate flower, the symbol of the church, and the motto tuetur et unit, that means “to protect and unite”.

The Castle is accessible only by guided tour of about 50 minutes. 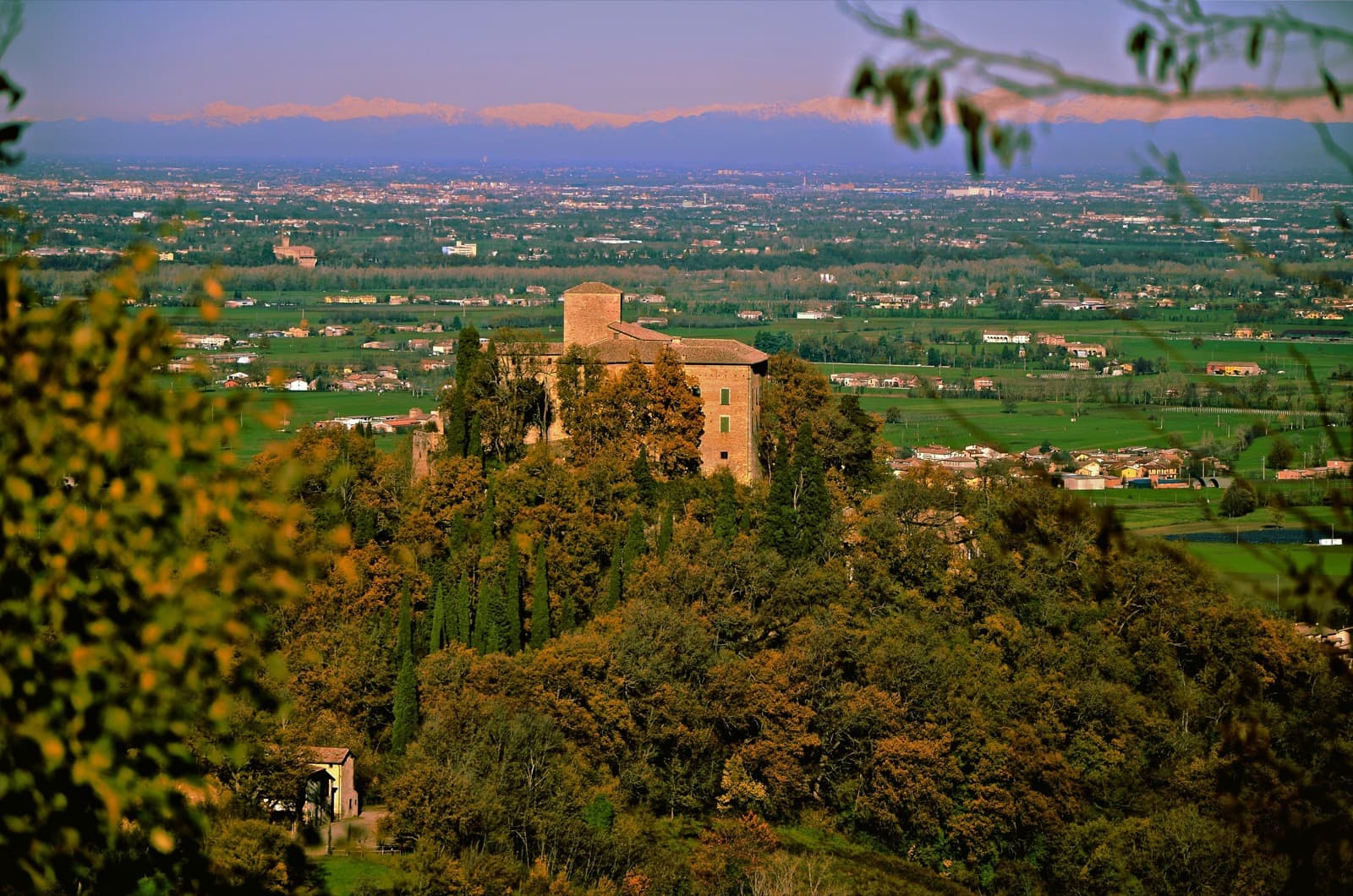 The Castle of Rossena was built around 960 by Count Adalberto Atto, great-grandfather of Matilde of Canossa, for the specific purpose of building a stronghold in defense of Canossa Castle, the main seat of their power, located about 2 km away.
After Matilde of Canossa’s death, the castle passed from hand to hand among the main exponents of the Italian and international nobility and aristocracy; among the families that owned it we can list the Da Correggio, the Farnese, Maria Luisa of Austria and the Este.

The building is still perfectly preserved, also thanks to a recent restoration: it’s an extraordinary architectural jewel which can be accessed, after a short climb, through a stone arch.
A small staircase leads to the fort consisting of the central core of the internal tower and 21 rooms arranged on several levels. From its windows we overlook the wonderful surrounding hilly landscapes and the nearby Torre di Rossenella, a watchtower accessible by an easy path.

The castle can be visited and inside it’s also possible to stay overnight, because there is a hostel with 54 beds. 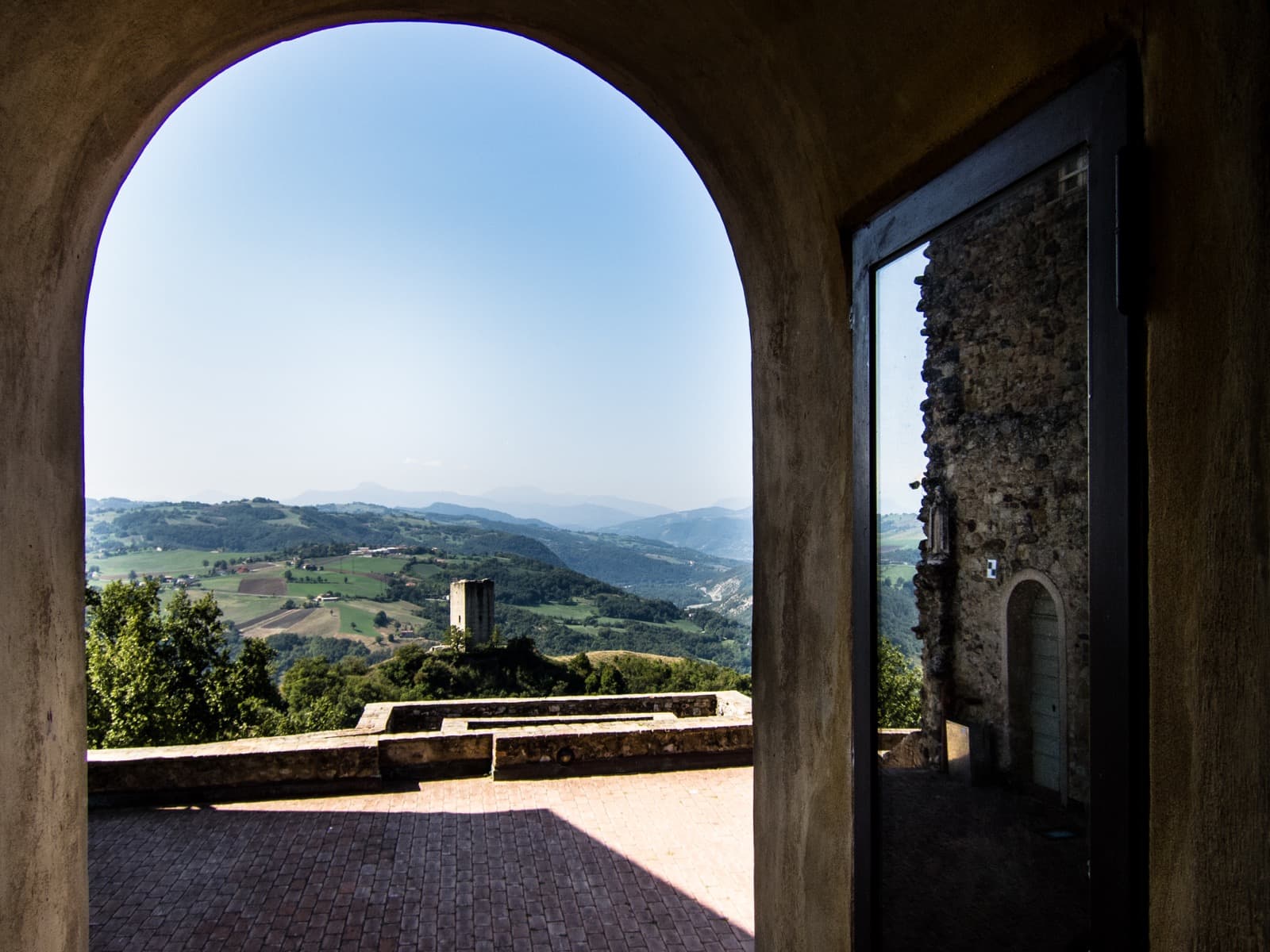 Today only ruins remain of the massive Castle of Canossa, built on a panoramic white sandstone cliff, but the characteristics of the landscape that surround it and the historical memories that it witnessed make this castle in the Reggio Emilia Apennines a place of extraordinary charm.

Also built by Adalberto Atto, Matilde of Canossa’s great-grandfather, it became the center of the complex Canossian defense system. In addition to the famous episode of the Humiliation of Enrico IV, who waited on his knees for three days and three nights in front of the entrance door, the Canossa Castle had already been the stage for important historical episodes related to the Attoni family: in 951 Adalberto gave here refuge to Queen Adelaide, widow of King Lotario II, who was fleeing the castle of Garda, where the new King Berengario II had imprisoned her.

The castle is open from Tuesday to Sunday with continuous hours and it is possible to book a guided tour to be agreed with the ticket office. The Naborre Campanini Museum is also set up on the site, which houses the findings from the castle excavations. 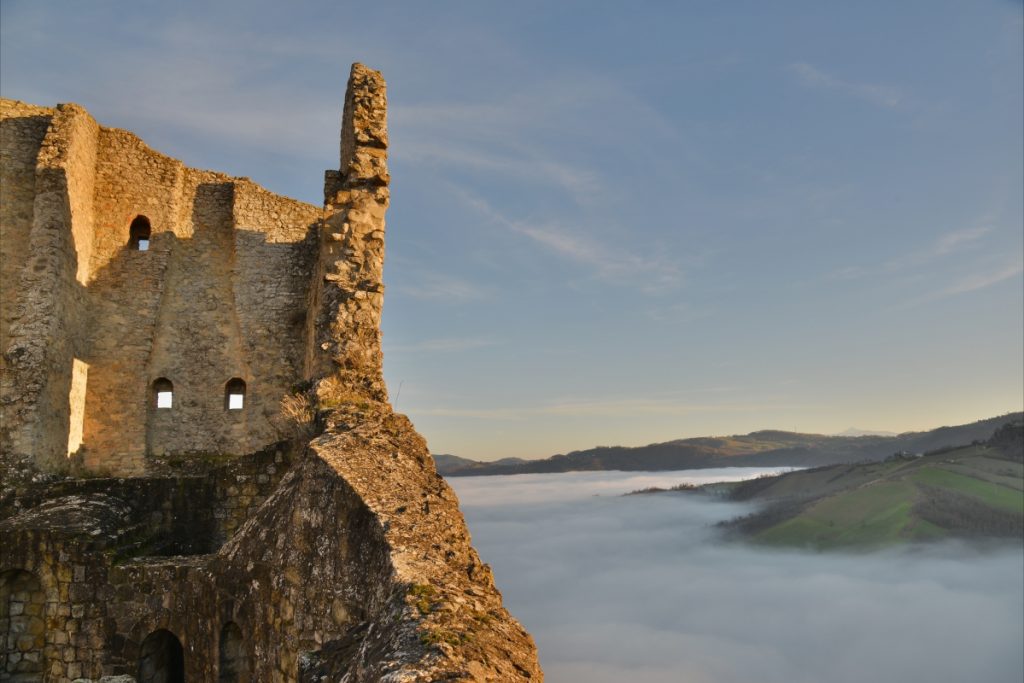 Like other Matildic castles, the construction of the Castle of Sarzano took place thanks to Atto Adalberto, who in 958 bought the property of a previous fortification; thanks to the Attoni family, the castle became an important crossroads of the time, also due to its location halfway between the former Langobardia and Tuscia.

The place still offers to the visitor an unexpected landscape, rich in history and traditions.
In addition to being “one of the most elegant and best preserved fortresses in the Emilian Apennines” (as the archaeologist and art historian Corrado Ricci said in 1885), the famous Ars Canusina® was born in this place.
Here, in fact, the doctor Maria Bertolani Del Rio conceived and realized, a hundred years ago, an original artistic and therapeutic experience called Ars Canusina®, which took inspiration precisely from the millennial myth of Matilde of Canossa and is today the most typical artistic craftsmanship of the area.

Finally, a curiosity about the castle that links its history to the world of cinema: perhaps not everyone knows that the British actor Christopher Lee, the famous Dracula of well-known movies, was the eleventh marquis of Sarzano, since Sarzano was the home of his ancestors, the Carandini family.

Sarzano Castle is open on weekends and can be visited freely. 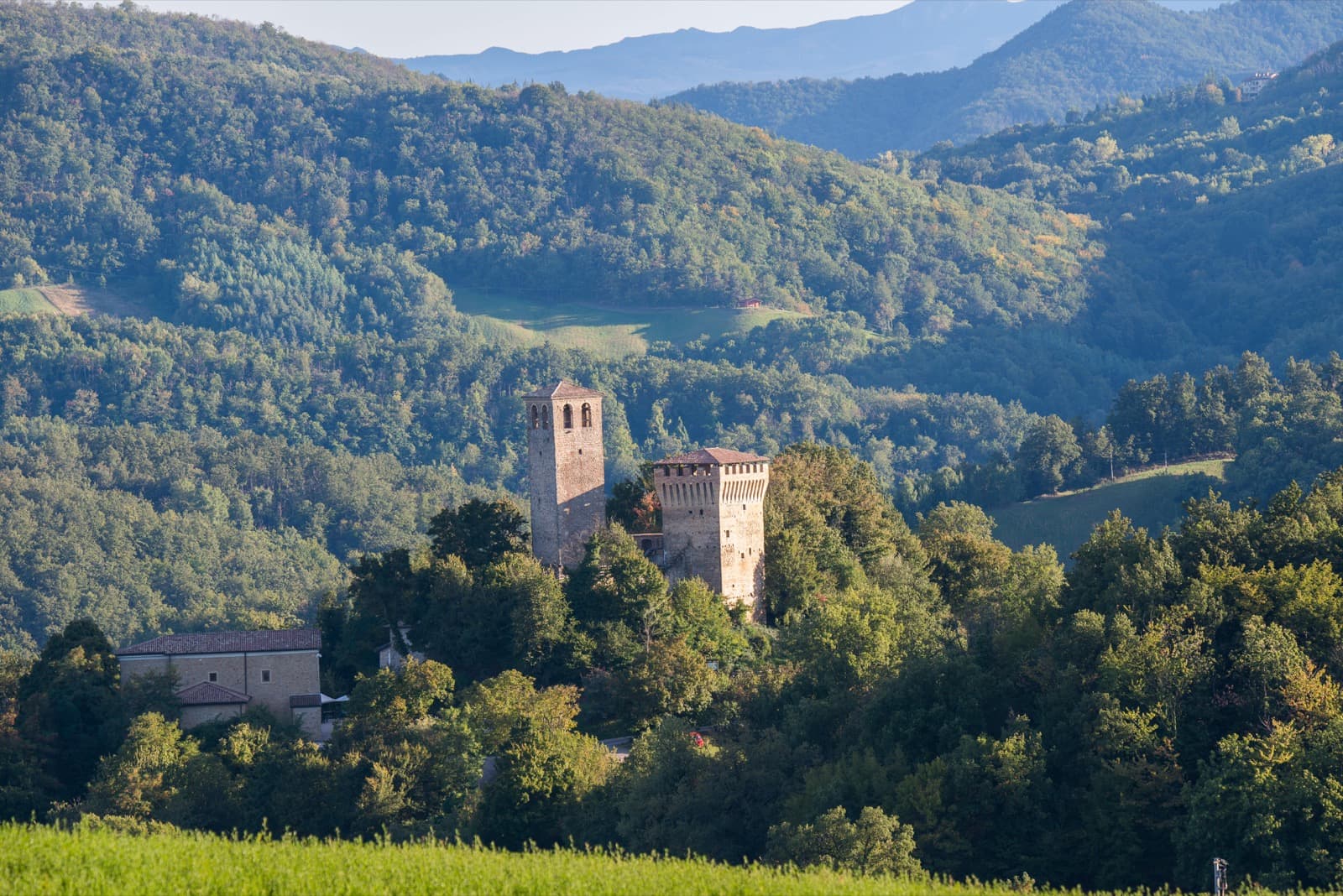 The Castle of Carpineti rises powerful on one of the rocky spurs of the ridge of Mount Antognano, as to underline its ancient defensive function.
It’s assumed that the primitive city walls date back to the time of the Hungarian raids, but the foundation of the castle is instead attributed also in this case to Adalberto Atto di Canossa.

The structure of the complex is called “castle-fence” because of the irregular-plan walls, inside which the mastio stands, still almost intact.
Its rooms have hosted popes, bishops, kings and emperors: all those powerful people who at the time of Matilde entered into agreements on the fate of Italy and its people.

The Castle of Carpineti, open on weekends (or by reservation during the week) is also located on an important crossroads of hiking trails: the Spallanzani path and the Via Matildica del Volto Santo. 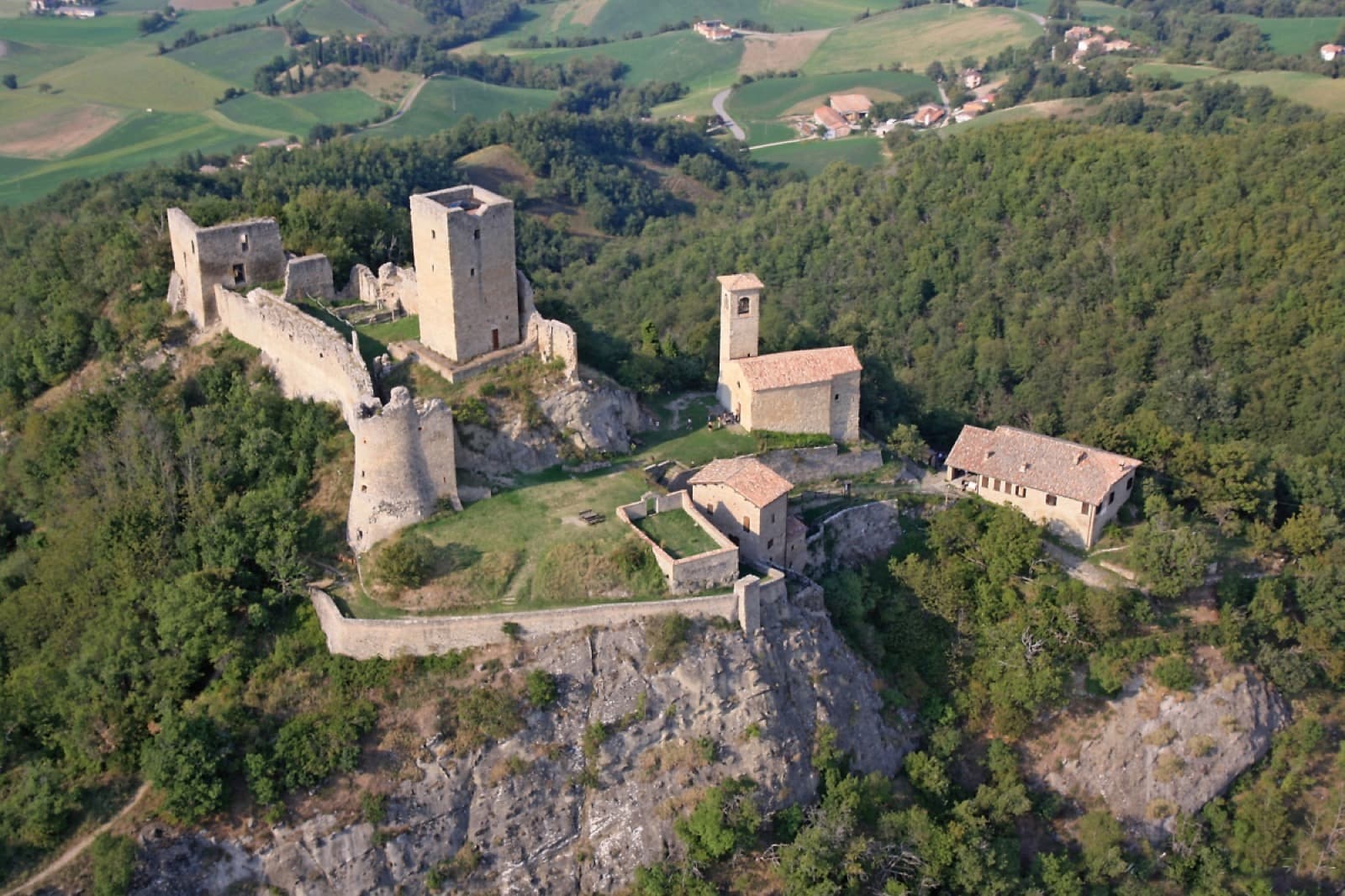