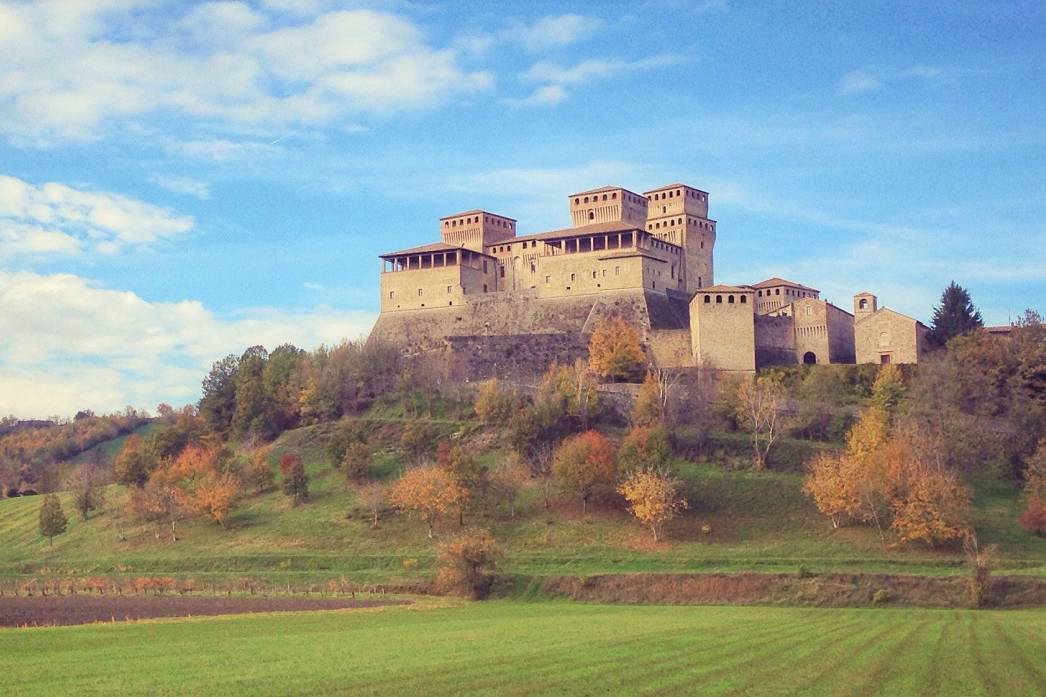 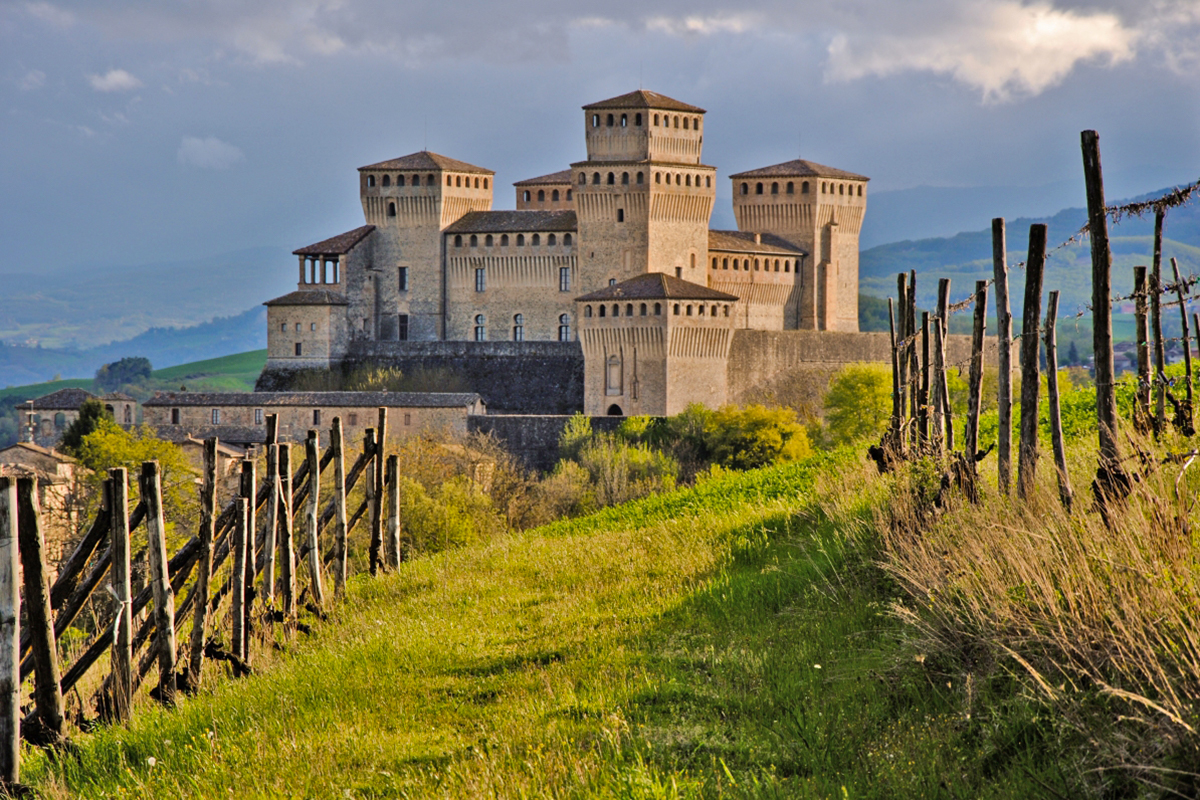 Nestled on the hills that build the natural landscapes of the valley of the river Parma, the CASTLE OF TORRECHIARA is undoubtedly one of the most extraordinary and important castles in Emilia-Romagna, if not in all Italy.

The name of the castle stems from the term “Torciara”, literally “wine press”, as in the Middle Ages, this area, as it happens still today, benefited from mild weather, and as a consequence a bright view on vineyards and olive tree groves.

Between 1448 and 1460, “condottiero” Pier Maria II de’ Rossi, a powerful lord of these lands, ordered the construction of this complex on a preexisting fortified building.

The structure had to fulfill a double role, a dichotomy of sense and function. On the one hand, it was a military and defensive stronghold for the control of the underlying valley. On the other hand, however, it was the cradle of his love for Bianca Pellegrini di Arturo, known not long before at the Milanese court of the Sforza. 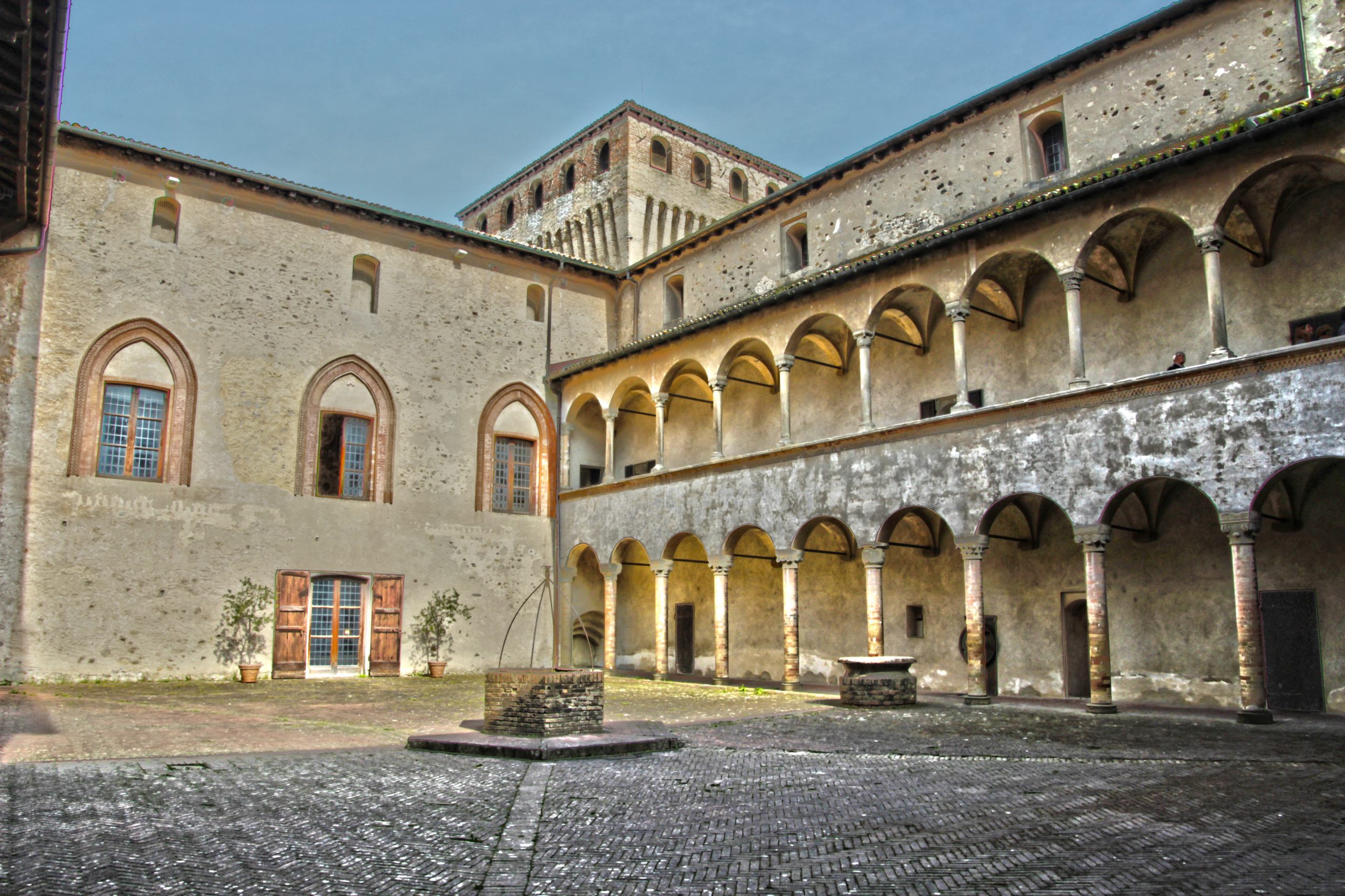 It took twenty years to build this castle, twenty years to make it a magnificent stronghold, a must-see for thousands of visitors that reach the little village of Langhirano, just 20 km south-east of Parma.

This charming building, with its towered and elegant silhouette, evokes a medieval past, arousing the curiosity of many writers and directors. This is the case of the famous movie “Ladyhawke”: some of the scenes were shot right here.

Outside, Torrechiara seems severe and austere, but everything changes as soon as you cross the defensive lines of the castle (there are no less than three wall lines with as many as four towers). Passing from a long covered entrance, you will access the courtyard.

It’s at that moment that the military setting leaves space for the peaceful atmosphere of the courtesan and familiar life. Inside, everything suggests a manor house, built to celebrate the love between Bianca and Pier Maria. The monograms of the two lovers are immediately recognizable on the door’s stud of the castle church dedicated to Saint Nicomedes. 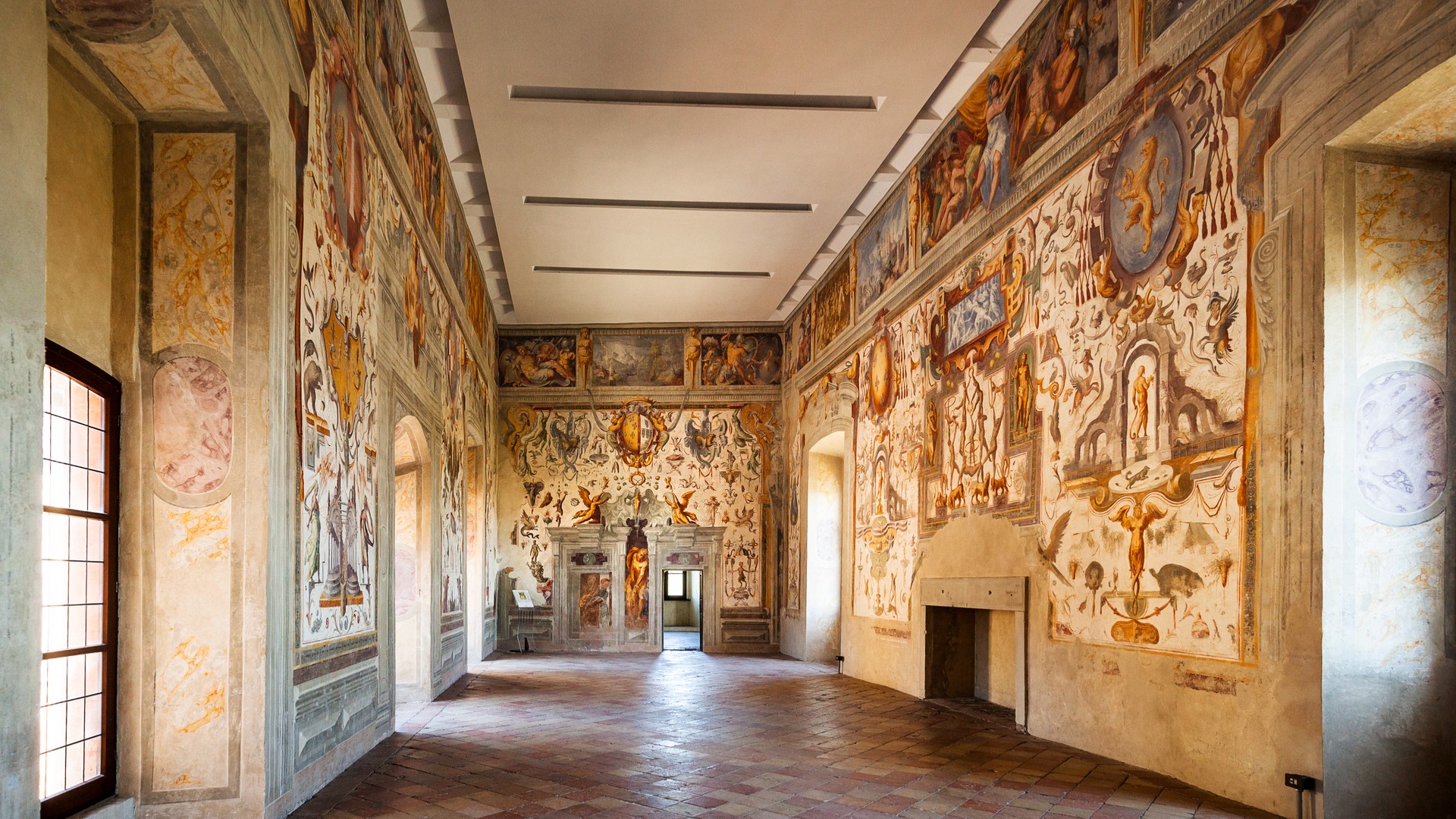 Inside, the castle is a feast of frescoes. Despite the few pieces of furniture scattered here and there, an ensemble of vivid colours and bizarre figures embellish the entire visit route.

Above all, the Camera d’Oro (Golden Chamber) is the most beautiful room, ascribed with almost absolute certainty to Benedetto Bembo, one of the most skillful and refined interpreters of Gothic art. The count paid no mind for the expenses of this room, which is a unicum from an artistic point of view since it put in the spotlight the private life of the noble family.

Inside, the decorations of the lunettes and of the rib vaults pay homage to the story of Pier Mattia and Bianca Pellegrini. At the same time, Brembo remarks the importance of the House of Rossi, depicting all the castles owned by the family.

Moreover, the room features the stems of the two lovers and two hearts with the sentences “Digne et in aeternum” (with dignity and in eternity) and “Nunc et semper” (now and forever), engraving so the eternity of their earthly love. 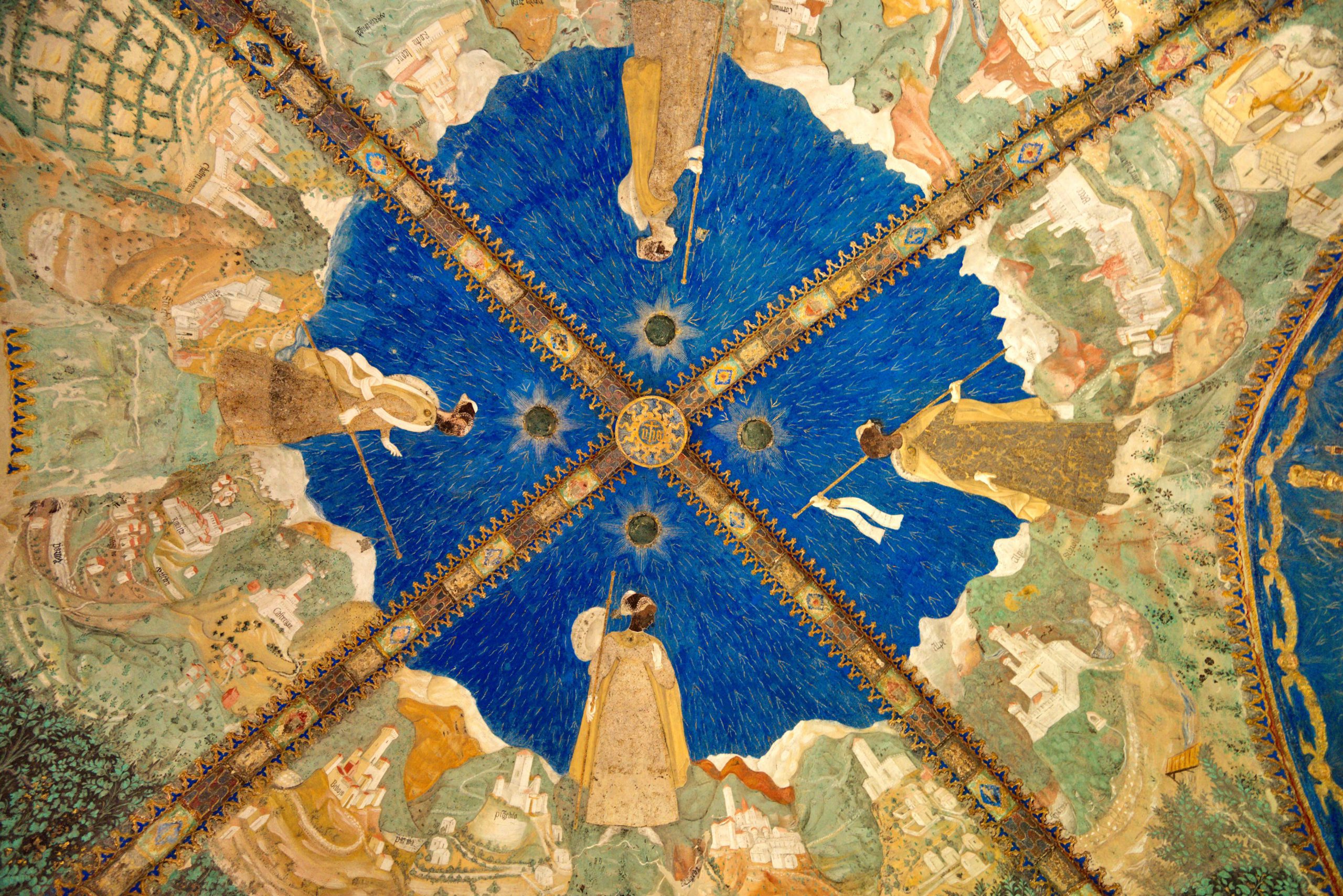 Even the frescoes of the other rooms are remarkable, painted by Cesare Baglioni and his collaborators (Giovanni Antonio Paganino and Innocenzo Martini). They represent grotesque mythological figures, angels, cartouches, and imaginary architecture.

Furthermore, the service areas are not to be missed, such as kitchens and stables, as well as the underground network of dungeons, open only on special occasions.

Last but not least, you definitely should visit the wall walks and look bewildered at all the surrounding territory before abandoning this journey into the Middle Ages and going back to your everyday life. 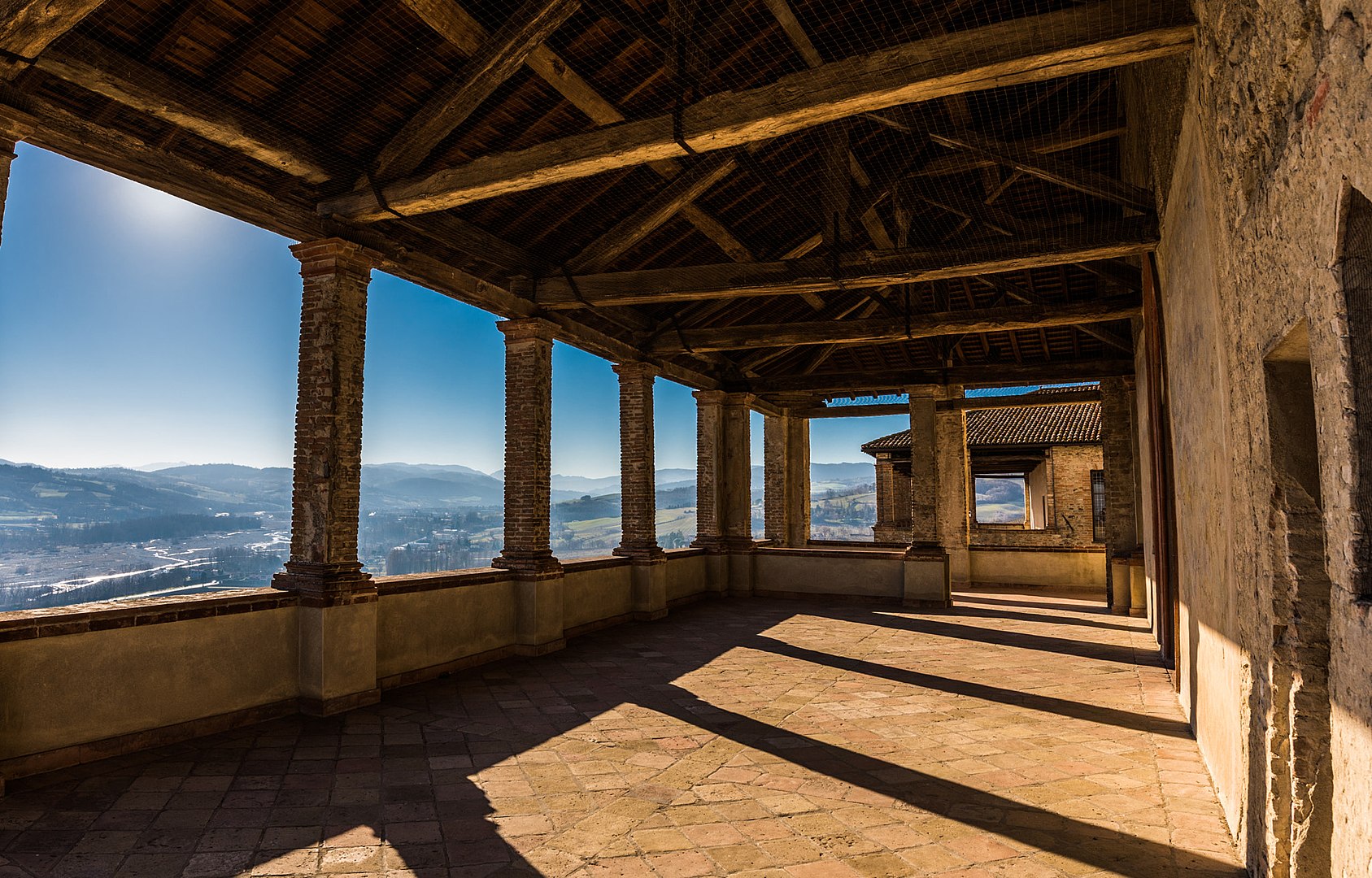 The Castle of Torrechiara has been declared a “National Monument”, becoming so part of the property of Polo Museale Emilia-Romagna.

Moreover, a few years ago it became part of the circuit of the Castles of the Duchy of Parma, Piacenza and Pontremoli, which aims at promoting the whole network of castles and noble houses in this territory.

Castles of the Duchy - Emilia-Romagna Castles 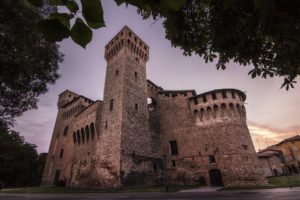