The “Balsamic Tales” are a series of writings dedicated to Traditional Balsamic Vinegar of Modena, made from interviews with people who dedicated their lives to this precious dressing, for work or for passion.
We thank PierPaolo Bortolotti, an expert in Traditional Balsamic Vinegar, Emilio Biancardi of Acetaia Villa Biancaand Massimo Clò of Collegio San Carlo di Modena, for their willingness and precious information.
After telling the Origins and the Productive Process, in this third episode we look into one of the most important phases, the Aging, to understand the transformations and the relative characteristics that this main product of the Modena area acquires during its maturation.

In the Modena area barrels were made mostly in oak or in mulberry, rarely in juniper; then there were the chestnut barrels, partly made of planks from the territory’s woods, partly coming from Tuscany; the chestnut barrels were in fact used for transport wines: they were the classic carratelli, barrels with an elongated shape, which, once arrived in Modena, were reused for wine and, when they began to have defects, were used to make vinegar.

In short, barrels used in the batches of Balsamic Vinegar were often recycled barrels, therefore contingently made with different woods; only over the years producers has realized that during the aging process the product takes the characteristics of the different types of wood in which has been contained, and consumers has begun to appreciate the different nuances of flavor. This is why over the years other woods have been inserted, such as cherry, which is not a traditional wood for balsamic vinegar, but which gives a very sweet, almond flavor.
Currently the most common wood for the production of Traditional Balsamic Vinegar is oak, an acid wood that is ideal for the first phase of the aging process; then there are chestnut and mulberry, which are more neutral and porous woods, which let the product breathe. The juniper, on the contrary, is a very pungent wood because it is resinous, and requires at least 40 years to give a ready-to-eat vinegar, and in any case it gives a product with a strong taste.
In short, to give a practical idea of ​​use, vinegar aged in juniper is used to prepare a dish of game, vinegar aged in cherry is perfect with a dessert or an ice cream.

But what characteristics suggest that a balsamic is ready to be bottled? Surely from the teaspoon that struggles to enter, a property due to the density of the product.
Then from the degree of volatile acidity: blowing slightly above the opening of the barrel, in fact, you can feel the acidity that rises: generally it is more pungent and marked in the larger barrels, where younger product is contained, while it is more gentle in the smaller barrels, where the product is softer.
Finally, when you taste an aged vinegar, its aromas still remains on the spoon, thing that doesn’t happen with young vinegars, of which nothing remains on the spoon.

To assess the age of a vinegar, you can therefore look at its density, but this is not enough. We specify it because on this property almost a mania has developed among the consumers of the product.
The reality of the facts should be this: an Extravecchio vinegar – with a minimum aging of 25 years – is denser than a Refined vinegar – with a minimum aging of 12 years – and weighs slightly more for an specific weight reason. However, density is not the fundamental characteristic of the product, because with the density we lose a very large part of the acidity of vinegar: a product that is too dense is therefore a product that does not reflect (and is not good for) tradition.

In the next episode we’ll talk about bottling and methods of protection. 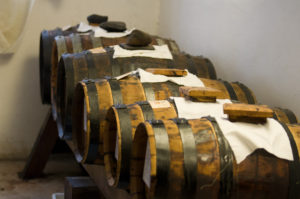