Castelvetro di Modena is a little, picturesque hilly town in the heart of Emilia-Romagna, between Modena and Bologna.
Its silhouette peppered with towers and bell towers stands out from the fertile countryside draped in vineyards.
The area has a strong winemaking tradition, and Castelvetro has been a member of the Città del Vino (Wine Cities) Association since 1994.
In 2003, it also gained the Orange Flag status, the certification awarded by the Italian Touring Club to quality tourist destinations.

What was originally an Etruscan settlement became a military camp around 150 BC for the Roman legions; the town’s name derives from the Latin words Castrum and Vetus, meaning old camp.

In the Middle Ages, the feud was controlled by Marquis Bonifacio of Tuscany and then, on his death, by his famous daughter, Matilda of Tuscany. A few years after the Great Countess died, Castelvetro was annexed to the Municipality of Modena.

When the Guelph–Ghibelline war began, the village – on the Ghibelline side – was besieged and destroyed by the Pope’s Guelph soldiers. The feud was then granted to Jacopino Rangone, whose family owned it until the modern era.

Any visit to Castelvetro simply must begin at the heart of the village: the main square, Piazza Roma. Rinaldi Palace, the clock tower, the town hall and the prison tower all cluster around, and there are superb views of the valley.

The square is actually relatively recent, as the buildings on the northern side of the castle (except the towers) were demolished in the mid 1930s and the special chequerboard pavement put in. Crowds gather in September for the game of human draughts.

Don’t miss Levizzano Rangone castle, a defensive bulwark against the Hungarians that belonged to Marquis Bonifacio of Tuscany, father of Great Countess Matilda.

The ancient structure comprised a defensive wall with the square Matilda Tower in the centre, which also acted as a seat of power, being the lord’s residence. In 1342, the castle was taken over by the Rangone family, who turned into the noble residence that it would remain until the Napoleonic conquest.

During the 19th and 20th centuries, when the local council took ownership, a major restoration was carried out on nearly three quarters of the building. In the Bishop’s Rooms, in particular, the old wooden ceilings and the frescoes with chivalric scenes were returned to their former glory.

Visit the Municipal Acetaia (vinegar cellar), established in 2002 by the local master tasters from the traditional Modena balsamic vinegar consortium to proselytize about Modena’s “black gold”. It houses two batteries of seven barrels each and a collection of exhibits about vinegar culture, including some tragni, traditional enamelled terracotta pots used to contain vinegar. Discover how it is still made today by dropping in on one of the local vinegar cellars for a taster.

Discover the Lambrusco Grasparossa of Castelvetro PDO in all its various guises with a tasting visit to one of the area’s wine cellars.

Explore the permanent collection of Renaissance-style garments owned by the Dama Vivente Association at the Fili d’Oro a Palazzo museum.

In May, the Graspalonga Gourmet: a wine weekend in the great outdoors, with an easy cycling route punctuated by tastings at local wineries.

In June, Mercurdo, the Market of the Absurd: displays and exhibitions on the theme of the weird and wonderful, with a market of odd and unusual objects.

In August, Calici di Stelle (A goblet of stars), a weekend of wine tastings and observing falling stars.

In September, the Human Draughts festival (in even-numbered years) alternates with the Festival at the Castle (in odd years), the historic event that harks back to the festivities that the Marquises of Rangone put on for the poet Torquato Tasso when he sought refuge here.

Besides Lambrusco Grasparossa, there are other opportunities to enjoy the array of local PDO products, from traditional balsamic vinegar of Modena to Parmigiano Reggiano cheese and Modena ham.
Castelvetro is between Modena and Bologna, so the traditional recipes include tortellini in broth and other typical fresh pasta shapes (such as tagliatelle and tortelloni), crescentine modenesi aka tigelle (a bread filled with salami and cheeses), rabbit alla cacciatora (with tomato and onion), borlenghi crepes and cherry pie.

Castelvetro is the starting point of the Western Romea Nonantolana Way, a 45-mile trek to the Croce Arcana Pass, entering then in Tuscany. 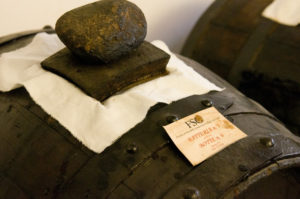