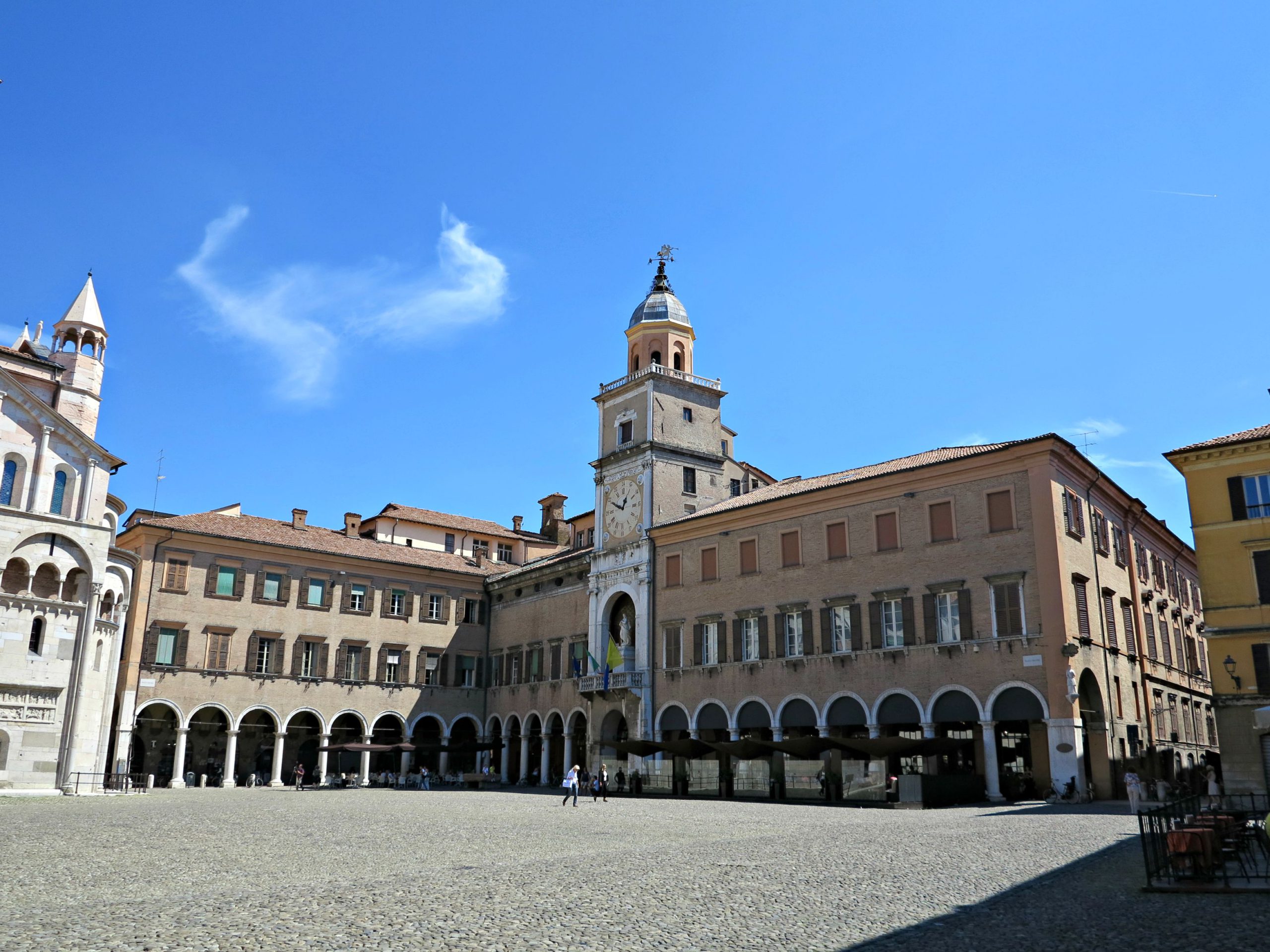 Modena is located in the heart of the Po Valley, in a fertile area surrounded by the two rivers Secchia and Panaro, while the first hills of the Apennines rise at about 15 kilometers south.

From a productive point of view, the city and its hinterland are distinguished by two peculiar characteristics: fast engines and slow food. On one side, the Modena area is home to important food industries, from the production of Parmigiano Reggiano to the processing of pork. On the other, the city together with its neighboring villages, such ad Maranello, is considered the world capital of motor racing: Ferrari, Maserati, Pagani, De Tomaso were born and/or have their historical headquarters right here.
This is accompanied by the important companies of the Ceramics District in the areas of Sassuolo and Fiorano Modenese, the remarkable textile industry of Carpi and the Biomedical District of Mirandola.

The history of the city of Modena begins in 183 bC, when the Roman colony of Mutina was established by the triumvirs Marco Emilio Lepido (builder also of our Via AEmilia), Tito Ebuzio Parro and Lucio Quinzio Crispino. Ancient University and Archiepiscopal seat, for over 260 years (from 1598 to 1859) the city was the capital of the Este Duchy.
Since 1997 its Piazza Grande, together with the Cathedral and the Ghirlandina Tower, has been included in the list of Italian UNESCO heritage sites.

Piazza Grande is the lively heart of the city and the place where you can find its most significant and loved monuments. The Cathedral, one of the greatest masterpieces of the Romanesque European, is decorated by the works of sculptor Wiligelmo, including the Main Gate and the Reliefs of the Genesis.
Next to the apse of the Cathedral, the Ghirlandina bell tower, which -with its 89,32 meters height- is the undisputed symbol of the city; its nickname derives from the marble balustrades crowning its spire “like graceful garlands”. Here all the information for the visit, activities that we recommend also to enjoy a beautiful panorama above the city.

Just behind Piazza Grande don’t miss the Liberty style structure of Albinelli Market: the covered market, opened in 1931 to permanently host the street sellers who occupied the Piazza, is the ideal place to buy typical quality products. 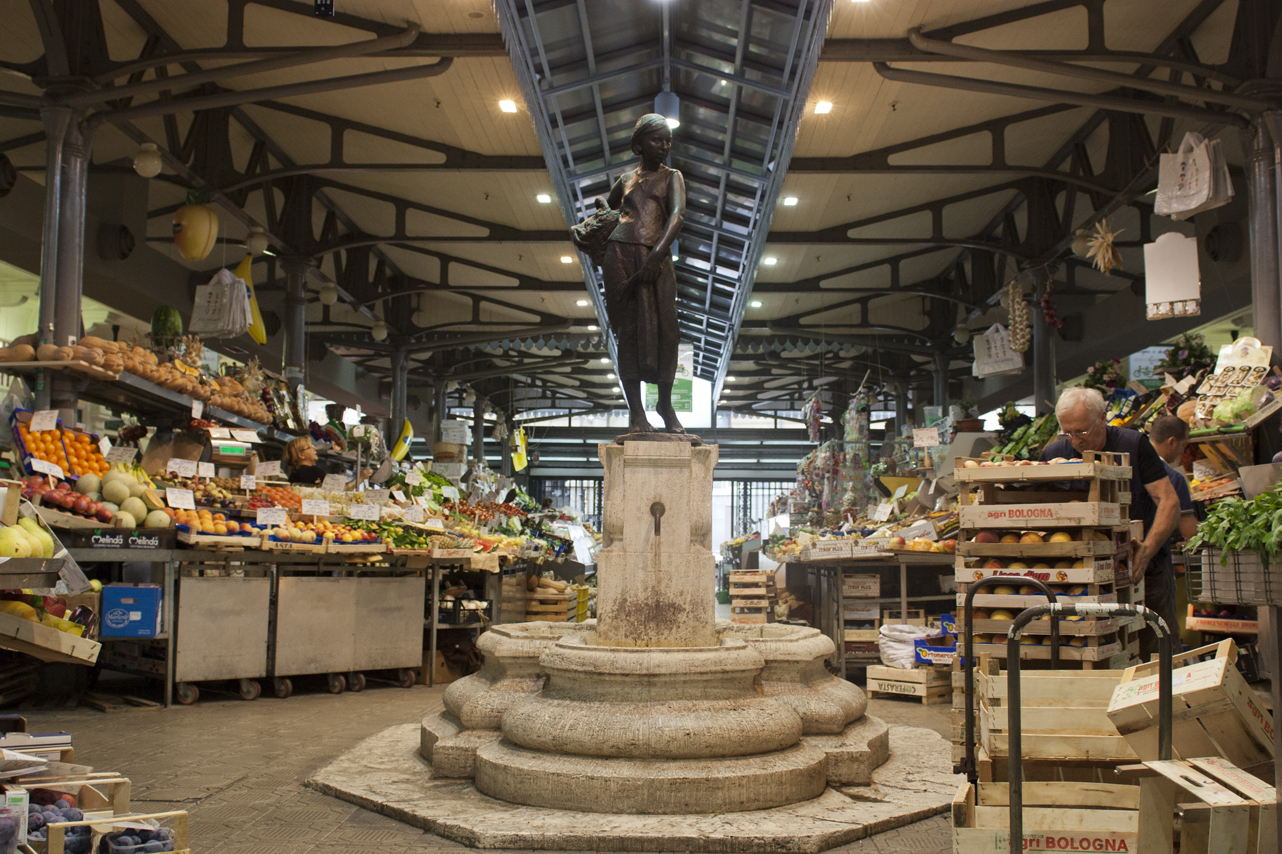 A few steps from Piazza Grande the wide Piazza Roma is overlooked by the seventeenth-century Palazzo Ducale, the building that for over 2 centuries has hosted the Este Court and that now is home to the Military Academy.
At the end of the lively Via del Taglio, another corner of Modena not to be missed is Piazza della Pomposa, a charming little cobblestone square on which Casa Tassoni, typical example of a Renaissance Modenese house, is located at number 89.

For architecture lovers, just outside the city center we point out the impressive Monumental Cemetery built by architect Aldo Rossi (the first Italian to win, in 1990, the Pritzker Prize).


At the Palazzo dei Musei, in Piazza Sant’Agostino, the main civic museums of the city are gathered, including:
the Art Museum;
the Ethnological Archaeological Museum;
the Estense Lapidary, the first public museum established in Modena in 1828, which tells the story of the city from the Roman Mutina, through the sculpture of the Middle Ages and the Renaissance, up to the Ducal period;
the Estense Gallery, the treasure brought by the Este Family to Modena when the city became the capital of the Duchy, which still bears witness to the passion for the arts and culture of the Este Court.

Among the other not-to-be-missed museums we point out:
the Enzo Ferrari Museum, set up in the mechanical workshop where Enzo Ferrari was born; on one hand it tells the life of the founder of Ferrari, on the other it shows, through temporary thematic exhibitions, some of the most beautiful and winning cars ever;
the Museo della Figurina, housed inside the prestigious Palazzo Santa Margherita, was born from the passionate collecting work of Giuseppe Panini, founder in 1961 of the homonymous sticker company.
the Luciano Pavarotti Museum, an exhibition desired by the Pavarotti Foundation that allows visitors to discover the personality of the Maestro, between his artistic career and private life.


For motor enthusiasts a visit to the Ferrari Museum in Maranello is a must; the museum tells the story of the Prancing Horse both through a rich and scenographic permanent collection and through curated thematic exhibitions.
Gastronomy enthusiasts can instead discover the Traditional Balsamic Vinegar of Modena with a visit to the Balsamic Museum of Spilamberto.
If you are looking for a relaxing day between culture and typical cuisine, the towns of Vignola and Castelvetro are perfect places.
In Vignola do not miss a walk in the shade of the Fortress, a view of the spiral staircase created by the great local architect Jacopo Barozzi in the homonymous Palace, and a stop at Pasticceria Gollini to taste the famous Torta Barozzi, whose original recipe is secret.
In Castelvetro di Modena, after a walk through the alleys of the village toward the Clock Tower in the delightful Piazza Roma, where you can enjoy a splendid view of the surrounding hills, you can visit the nearby Levizzano Castle or enjoy a glass of local Lambrusco Grasparossa.

HOW TO GET TO MODENA


Modena is about 40 km from the International Airport of Bologna and is connected to it by an Aerbus shuttle with departure / arrival from the Modena Bus Station. The bus is active every day with runs every two hours; the ride lasts about 50 minutes.


Modena Train Station is located in Piazza Dante Alighieri and is perfectly connected to Bologna Station with many trains every hour; the ride varies according to the type of train and takes a maximum of 30 minutes.