Street Art in Ravenna: a walk across the murals of the city

For some years, art has made its way into the ancient Byzantine capital, occupying neighborhoods that have always been on the edge of the historic centre.
In these areas on the border, between agreements and social collaboration, an extraordinary urban regeneration project has taken hold, making street art one of the new keys to reading and interpreting the contemporary world.

In a short time, the walls of Ravenna have shed their skin, or rather — if you prefer — they have changed their colours. From the city dock to the gate of Porta Adriana, from the Stadium to the Brancaleone Fortress, the city has turned into a real open-air museum, with works by Italian and international artists.

Partly, this has been possible thanks to the Subsidenze Festival (curated by Marco ‘Bonobolabo’ Miccoli of the Indastria Association), which since 2014, in collaboration with the Youth Policy Department of the Municipality of Ravenna, has been inviting artists from all over the world.

With more than eighty works scattered throughout the city, today Ravenna can be seen as a small capital of street art as well as a national reference point. 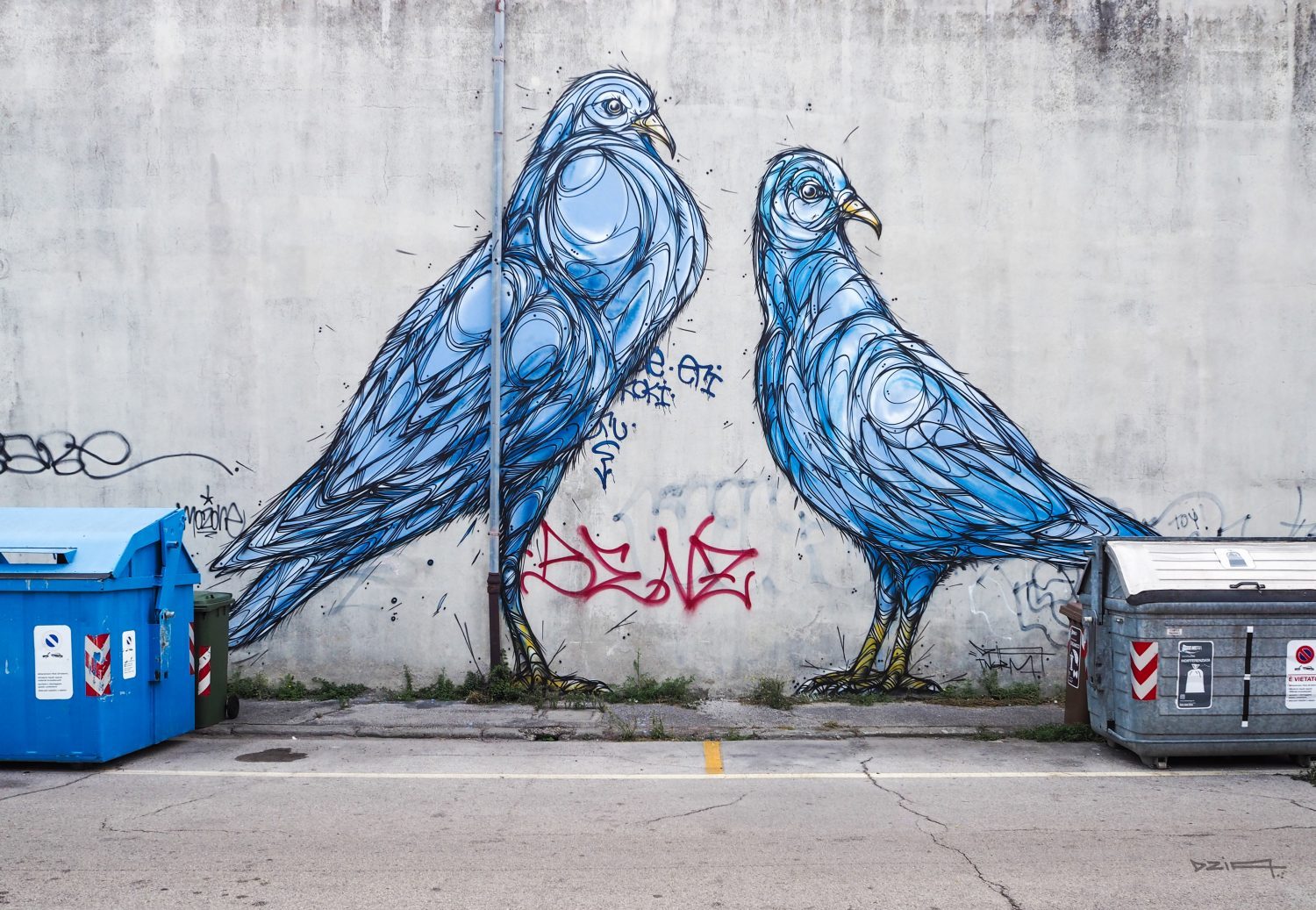 More and more people, especially among the younger generations, come to Ravenna to see these beautiful murals up close. The city dock, which has undergone a gradual redevelopment process, is undoubtedly the district with a greater number of murals.

In this densely populated area, poised between industrial archaeology and the popular housing of the 1970s, are so many works of street art.
With a simple walk or by bike or even behind the wheel of a scooter you will soon realize how much art is along these streets.

The tour is very nice. It takes about 2 hours to complete it on foot.

For the tour you can rely on three points of reference: the Candiano Canal – including the whole area near the Almagià and the Darsena PopUp, Via Trieste and Via Tommaso Gulli.

The advice is to take a sort of circular route: You may start from the head of the city dock and then proceed first going in Via Grado, and from there you go on, reaching what has recently been called the ‘Citadel of street art’ (it’s the popular complex with its entrance in Via Gulli, in front of the De Andrè Arena’s parking lot). After that, return to Via Trieste, and you will finally be again on the city’s dock.

Along these streets you can admire a multitude of works — some authorized, others not — painted by artists such as Ericailcane, Bastardilla, Millo, Jim Avignon, Basik, Pixel Pancho, Qbic, Tellas, Camilla Falsini, Zed1, Dzia, Hope, Dissenso Cognitivo, Geometric Bang, About Ponny, Reve +, Exit Enter and many others.

It would be impossible to mention them all, so I decided to tell you about the ones I am most attached to. 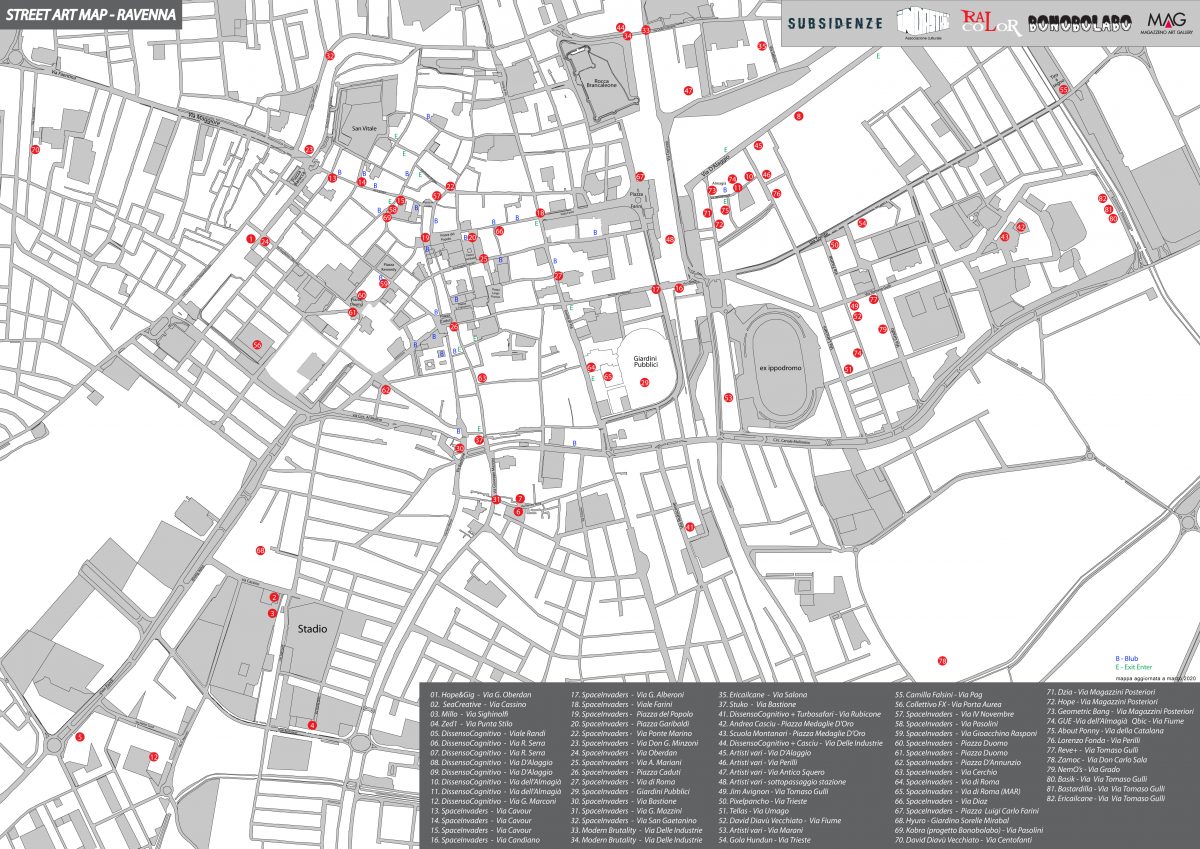 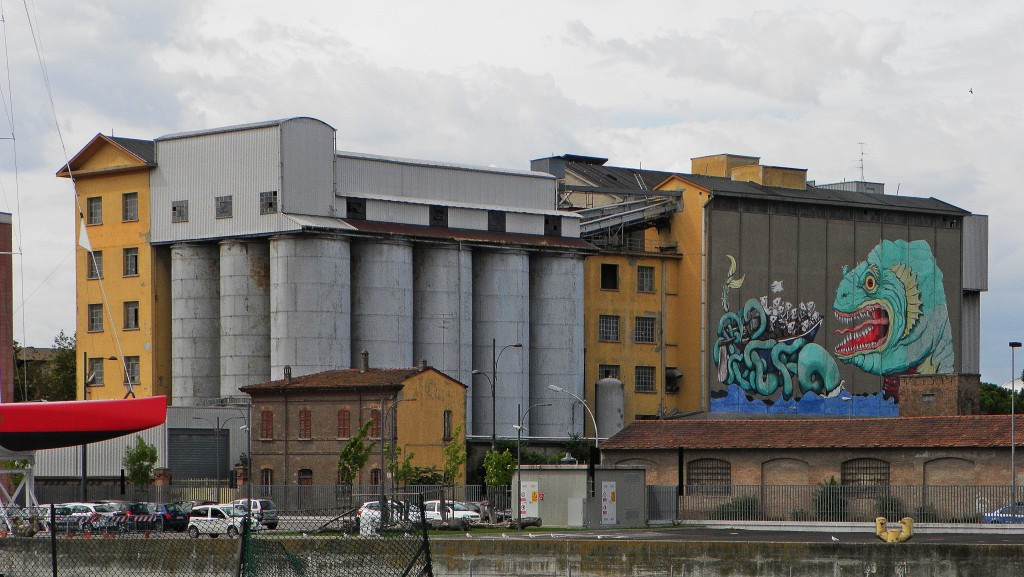 WHERE: Via Solona
huge water monster snakes on the large wall of the Martini Feed Factory in Via Solona. It’s ​​the result of that project that had almost led Ravenna to become the 2019 European Capital of Culture.

You can’t look at it too close — it’s impossible given the size (24 × 36 metres). You should move backward a few hundred metres to enjoy its view, overlooking the Candiano Canal.

This work was created by Ericailcane, one of the best known Italian street artists in the world, like his friend and colleague BLU.

Near the sea serpent is a boat of poor mice, which wave a white flag in the wind, asking for surrender and want to run away and take shelter from the dangers of modernity. 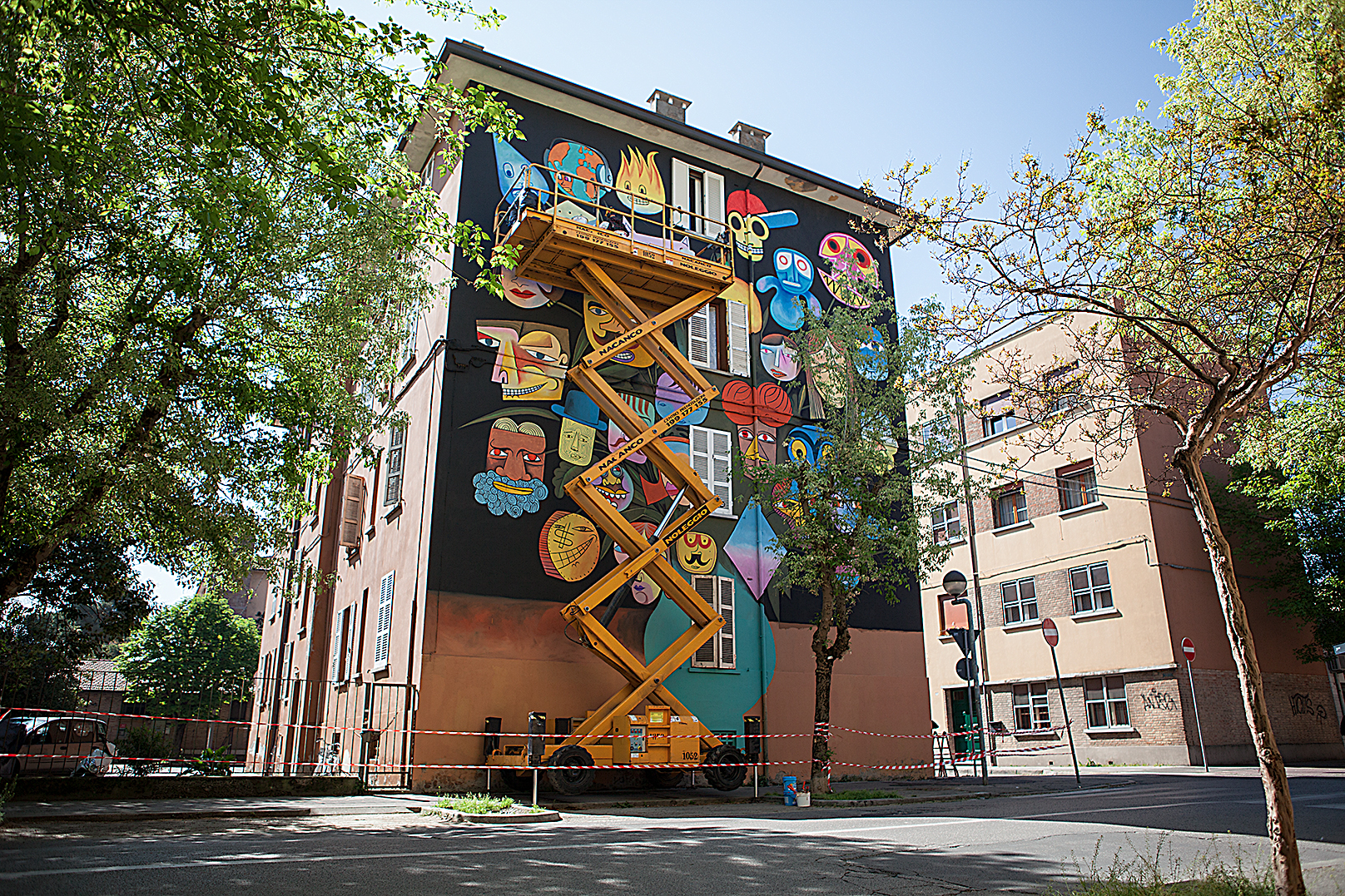 WHERE: Via Tommaso Gulli
A huge vase covers the entire facade of a building in the heart of the most multiethnic district of Ravenna. Its flowers smell of integration, depicting faces of women and men, African masks, skeletons with caps, cats and much more.

The work was created by Jim Avignon, a highly regarded street artist from Munich, who was one of the first to paint on the remains of the Berlin Wall during the reunification of Germany.

In Ravenna, Sky Arte dedicated to him and his work an episode of the MURO series, curated by David Diavù Vecchiato.

Millo “At the beginning of the journey of our life” 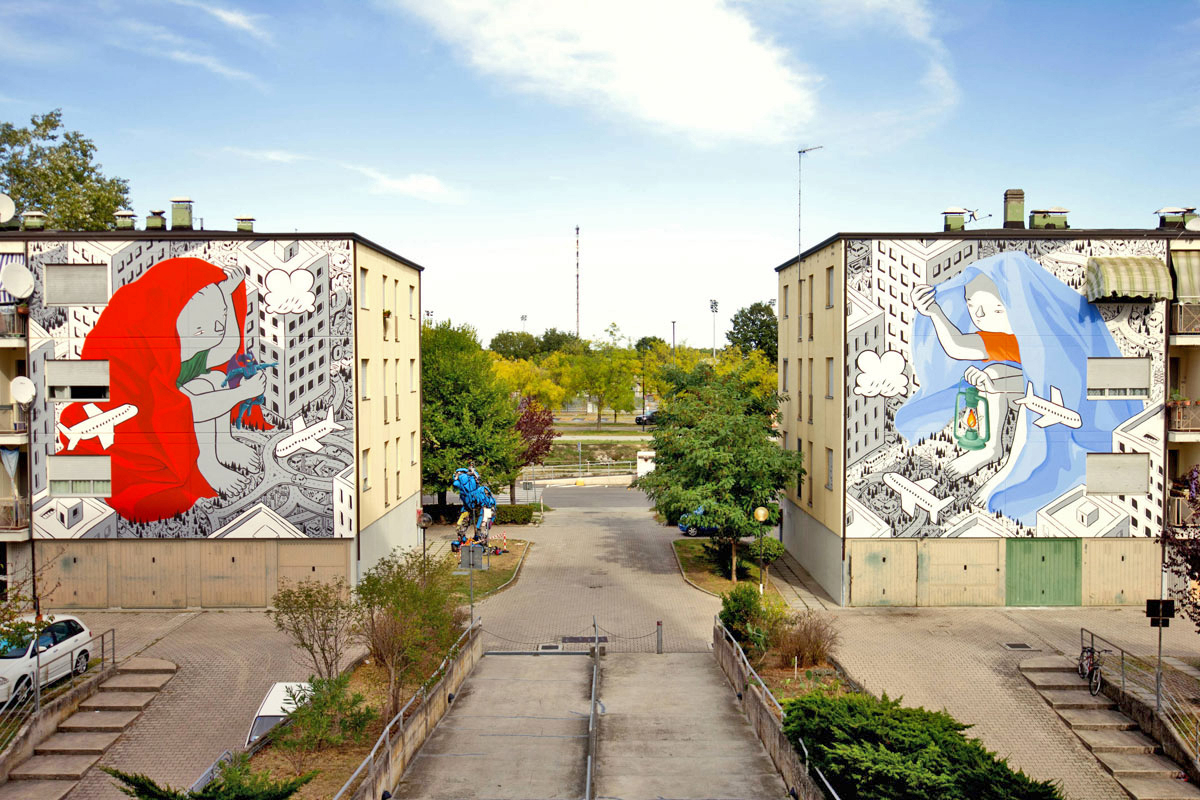 On the occasion of the seven hundredth anniversary of Dante’s death (vivadante.it), he gave the city another beautiful work.

With the aim of paying homage to the Supreme Poet, this time he depicted Dante and Virgil as children, playing with some iconic objects related to their journey to the afterlife. 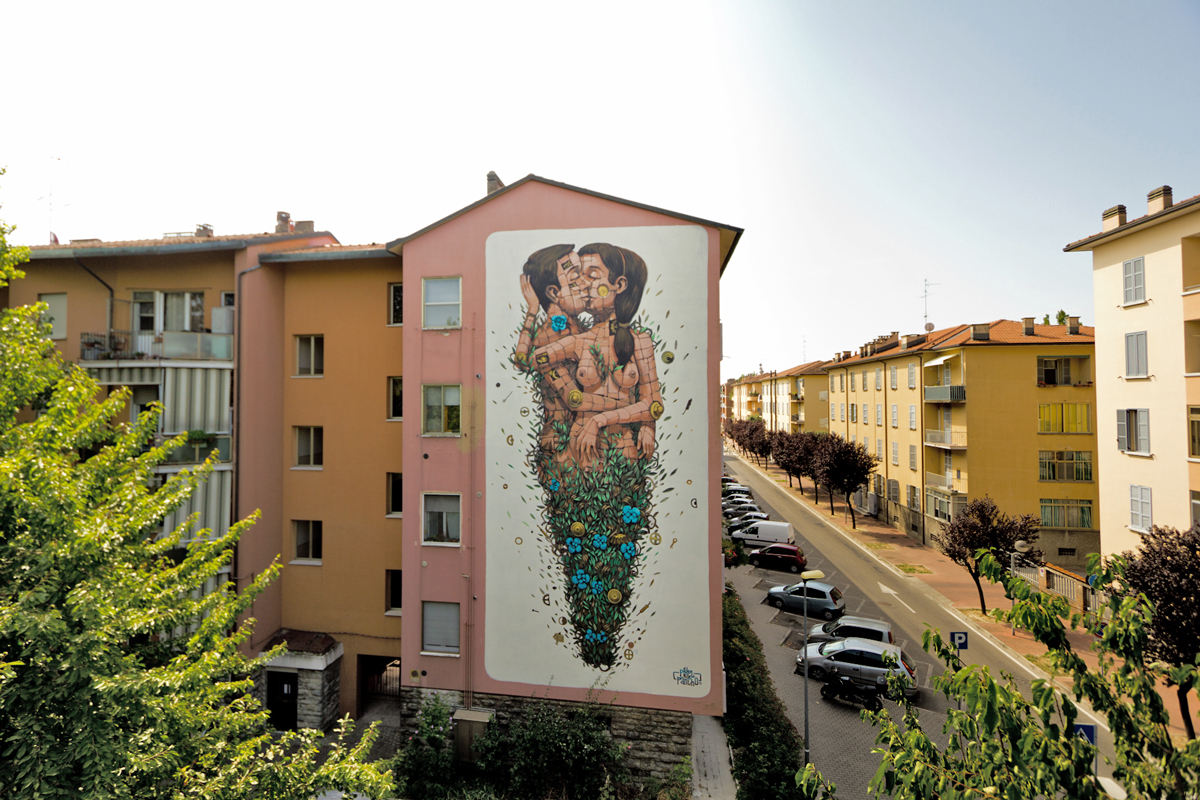 WHERE: Via Trieste
One last kiss before saying goodbye forever. In via Trieste, on a gigantic wall of a popular residential complex, slightly covered by the trees of the avenue and surrounded by flower beds, the work of Pixel Pancho emerges in all its poetics.

Pixel Pancho is a very talented Turin street artist, who found in his robots the way to express his creative spirit and describe the world.

Basik “The Incredulity of Saint Thomas” 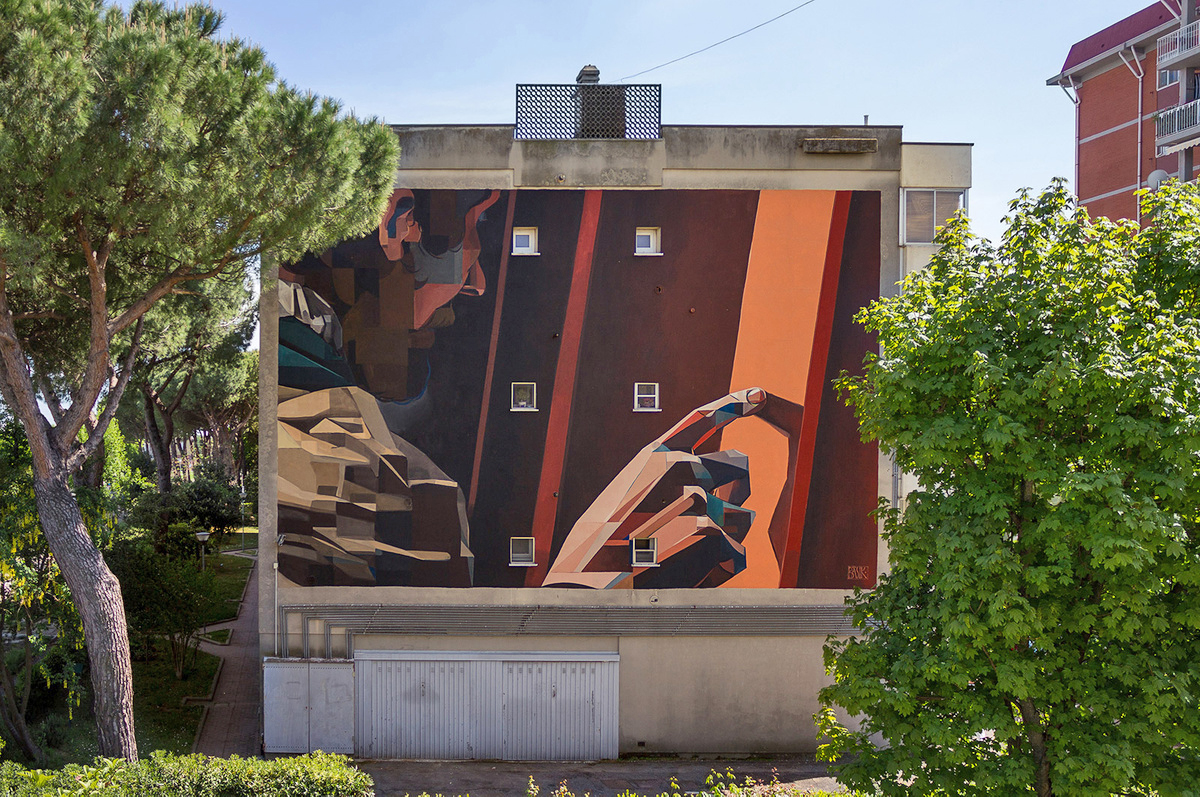 WHERE: Citadel of Street Art (Via Tommaso Gulli, in front of the Pala de Andrè car park)
The great artist Alberto Burri created in 1990 ‘Grande Ferro R’, a site-specific steel sculpture housed in the courtyard of the De Andrè Arena.

Basik’s work is a manifest homage to Burri’s creation — not just as a celebration, but also as a critique to the state of conservation and enhancement of contemporary art. Basik’s invites touching first hand — as Saint Thomas did — in order to understand the situation.

In this case, as for others in the city (for example the work of Camilla Falsini, not far away from Basik’s word), you can have an augmented reality experience downloading the free App ARIA The AR Platform. 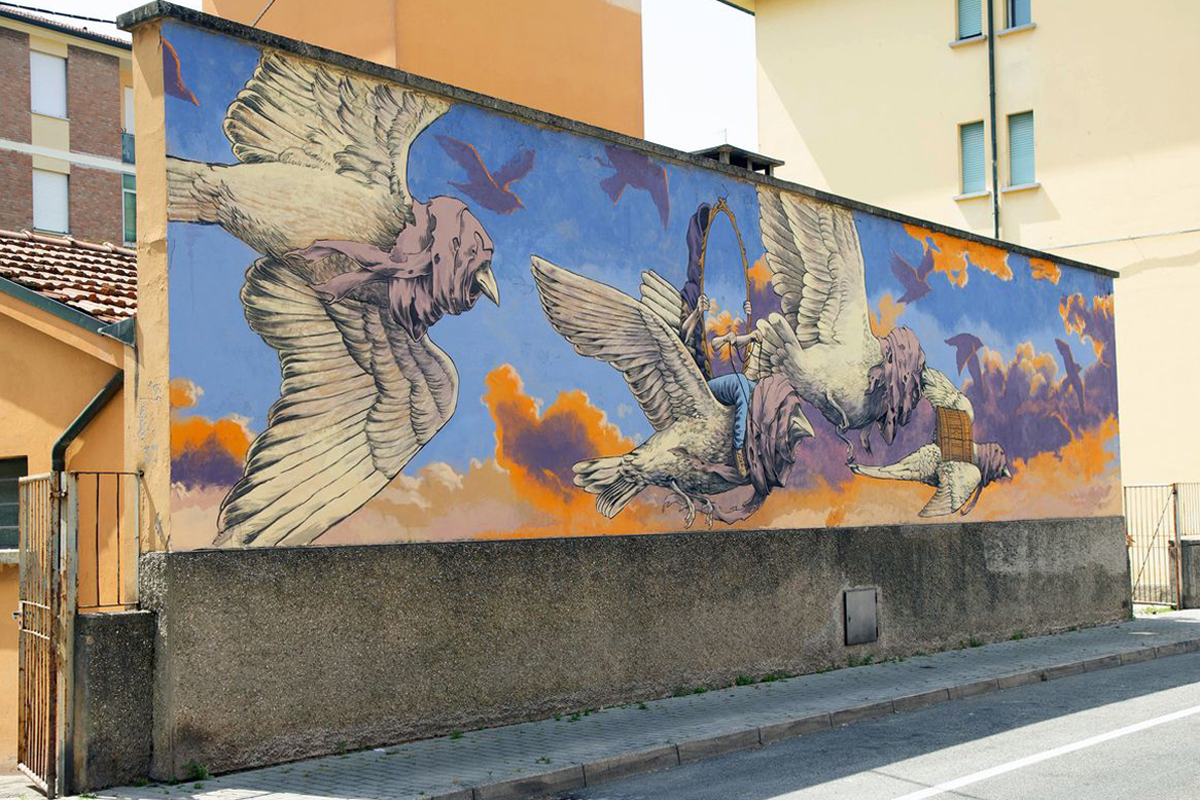 WHERE: Via Fiume
It’s an extroverted character the Kazakh Rustam Qbic. He was an artist even before being an illustrator and designer. In Ravenna, he has created an image that fits perfectly into the neighborhood.

His is a dreamlike work, depicting large blindfolded birds flying into the sunset, led by hooded characters: a tribute to those who leave, aimlessly, in search of a better life.

Beyond the district of the city dock, street artworks can be spotted everywhere in Ravenna, from the city centre up to the sea.

If you want more information about it, I suggest you contact the Indastria Association and the Magazzeno Art Gallery, which often deal with the artists who coloured the city’s streets.

Among the most emblematic artworks known to the national and international public, a mention goes to the Dante by Brazilian artist Kobra, in Via Pasolini, painted on the outer wall of the ‘F. Mordani’ primary school. It is a unique, intense, and definitely contemporary work that over the years has become a must-see for tourists and citizens alike. 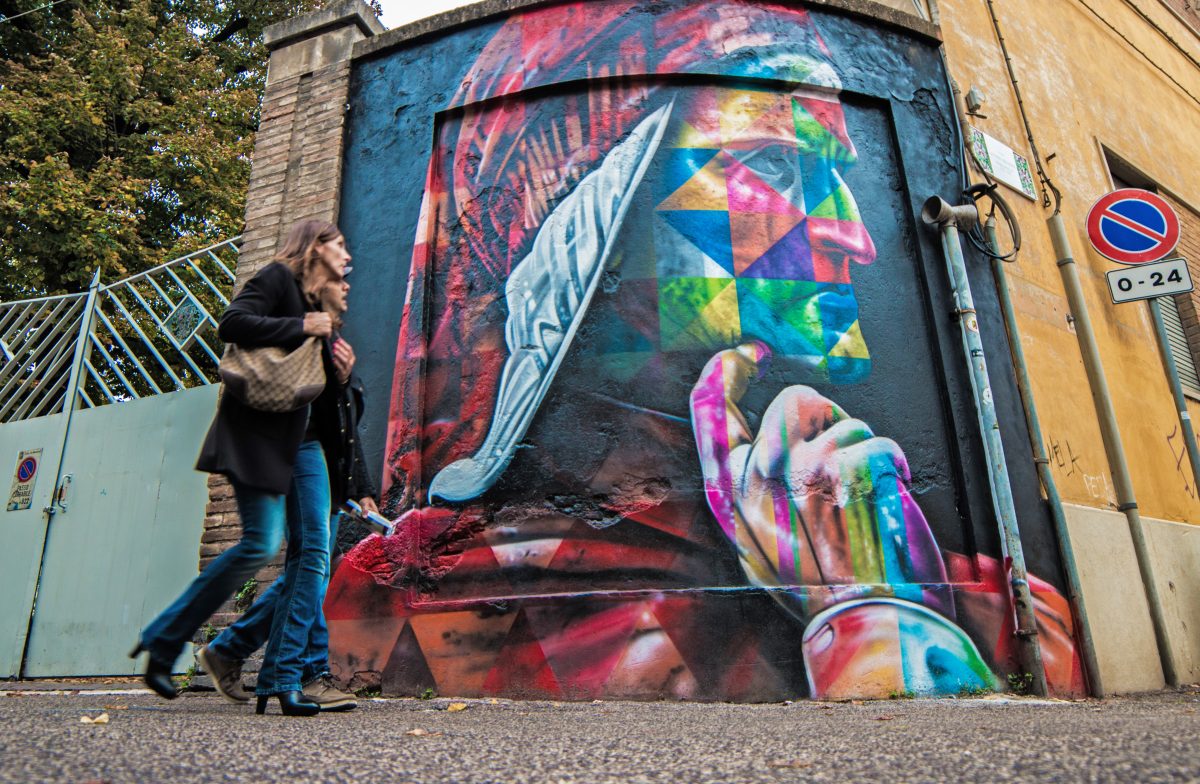 Then, there is the Invader case, one of the most famous artists in the world like Banksy, who in recent years has literally invaded the city with his works. The true identity of this artist is unknown (he defines himself as a ‘UFA’ — Unidentified Free Artist), but his works are very well known indeed: small coloured tiles inspired by the monsters and invaders of the video game ‘Space Invaders’.

Ravenna counts 40 invaders scattered throughout the territory. You can search for them through the free App FlashInvaders or thanks to the catalogue of his past exhibition ‘New Mosaic of Ravenna’, even though it’s not easy to find. Invader himself inaugurated it in 2017 in Hong Kong. 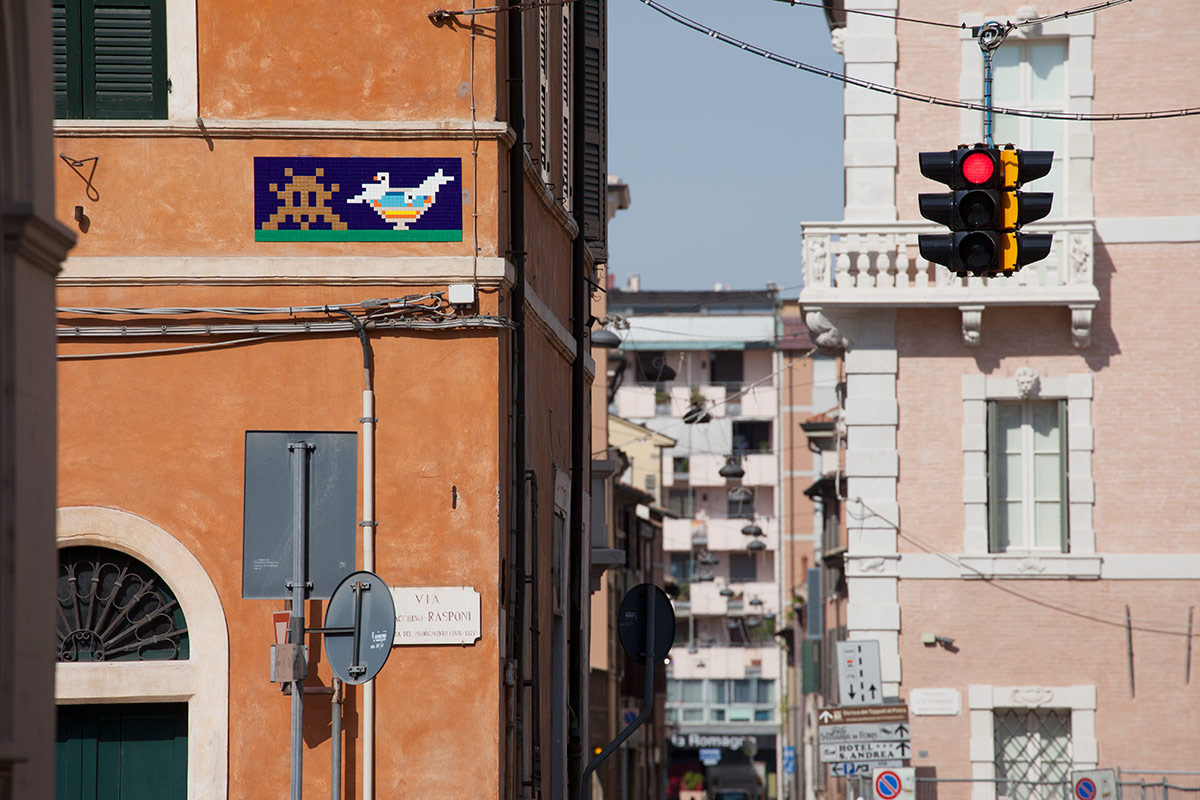 Finally, the latest new entry in the city is BLUB, a Florentine artist, internationally renowned for his works from the series ‘Art knows how to swim’, for which he created portraits of famous people, strictly underwater.

His works, made on sugar paper, are usually to be found on the city counters. Ravenna now has around thirty of his works, further enriching the street art map of the city. 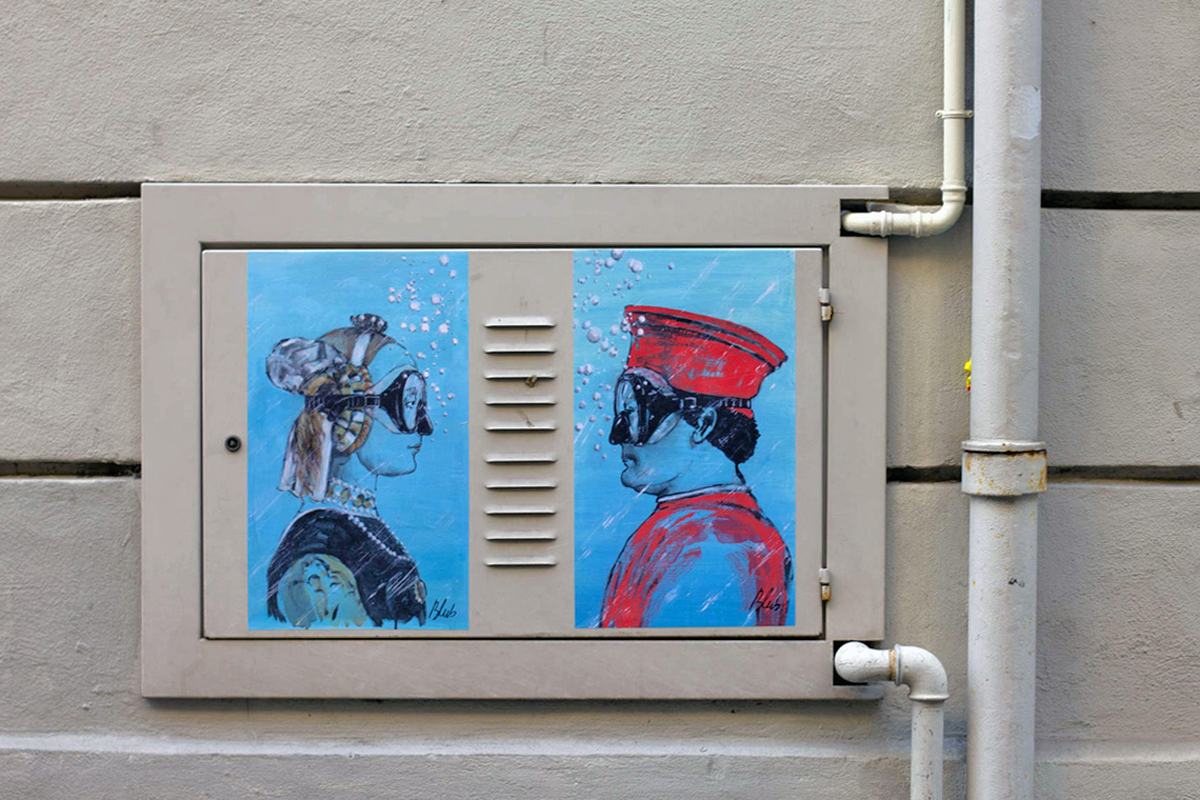 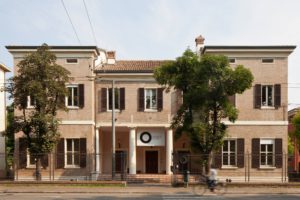