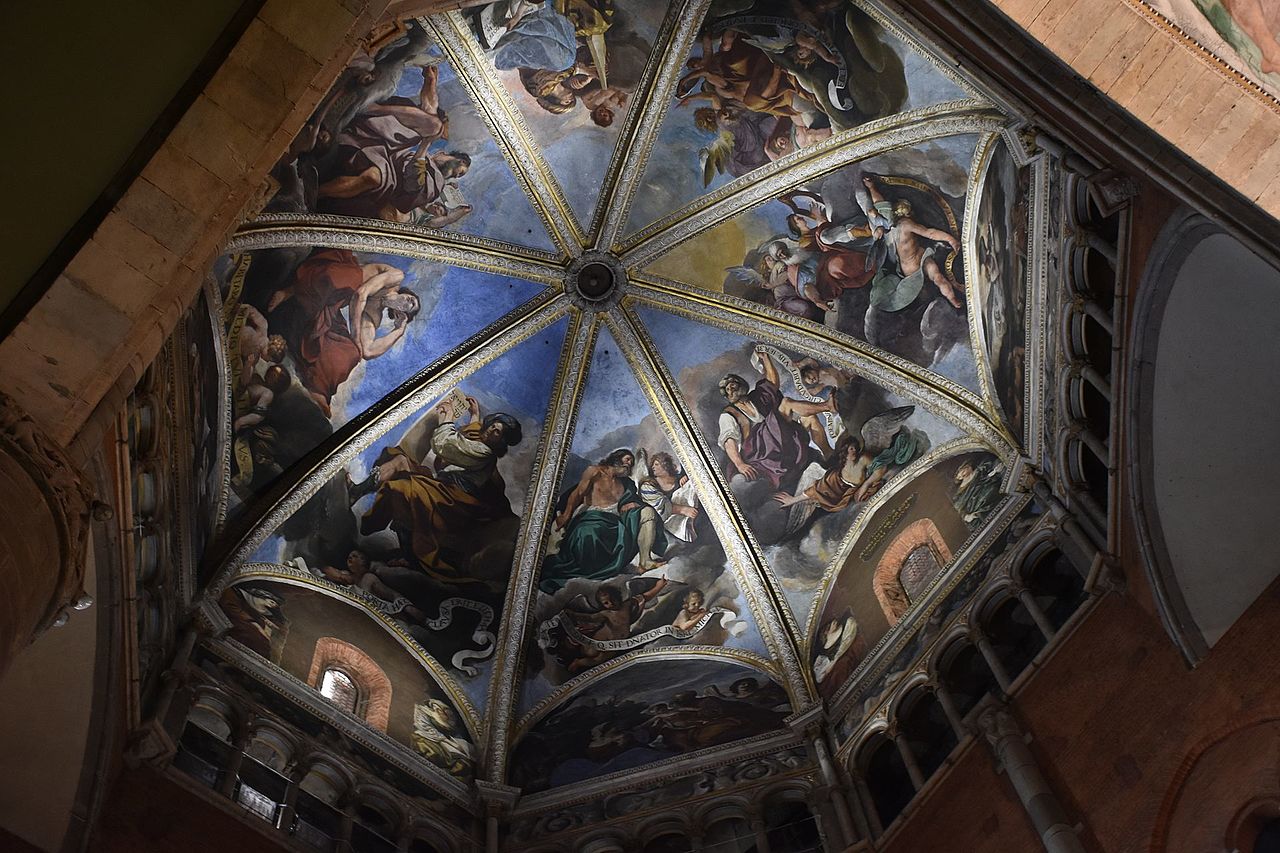 Piacenza was founded by the Romans on the banks of the Po river and enclosed between the hills and mountains of the Apennines. It’s the gateway to Emilia and is a sober and reserved city entirely to DISCOVER.

“Piacenza is a pass through land”, as Leonardo Da Vinci wrote in the Atlantic Codex, which has developed over time a strong vocation to hospitality, an integral part of its DNA.

Becoming an important medieval centre, it has been a stopover for princes and pilgrims, Crusaders and Templars, merchants and artists who left their mark here. But it was below the Duchy of the Farnese that the city lived its period of maximum splendour.
Piacenza, in fact, seduces with its austere and aristocratic charm. Each itinerary starts in the impressive  Baroque Piazza Cavalli, presided over by the two equestrian monuments of Ranuccio and Alessandro Farnese. It’s a historical and political centre of gravity of the city, where the Gothic Palace stands, made of white marble and terracotta. Near there is Palazzo Farnese, seat of the Civic Museums, whose initial project involved the demolition of the 14th century Citadel wanted by Visconti’s family. Today still remains the gate, the battlements and two towers. The Ducal tour ends with the Farnesian Walls that surrounded the town completely during the 16th century. It can be appreciated even more while walking on the Facsal (local version of Vauxhall), a place chosen for relaxation by the citizens.

Piacenza witnesses also a religious history too: starting from the Cathedral, a splendid example of emilian romanesque architecture, which hosts works of great value inside, like the cycle of frescoes in the Dome of Guercino, passing through the Basilica of Sant’ Antonino, patron saint of the city and a reference point for pilgrims of the Via Francigena, the Basilica of San Savino of early Christian foundation with mosaics flooring of the 12th century, the Basilica of Santa Maria di Campagna where, according to the tradition, Pope Urbano II announced his intention to start the First Crusade in the Holy Land.

BUT PIACENZA IS MUCH MORE…


It’s a city with a thousand years of history, with just as many attractions: it’s a TREASURE CHEST. In fact, beyond the stately palaces of the historic center there are many gardens, courtyards and porticoes, such as that of the Palazzo Anguissola Scotti, which will unveil to the eyes of the most curious and adventurous tourists.

It is also a destination for music lovers. Not everyone knows that the façade of the Municipal Theatre was redesigned by Alessandro Sanquirico, inspired by the Milan Scala. The traditional Teatro Lirico is host to the Cherubini Youth Orchestra, orchestrated by Riccardo Muti.

Built along the banks of the Po river, Piacenza follows its slow and inexorable rhythm. It is a perfect city to discover by bicycle.

Piacenza has always been a patriotic city, it made the history of the growing Kingdom of Italy between 19th and 20th century: it was the first city to ask the annexation to the Kingdom, earning the title of Italian’s Eldest City, and received the gold medal for military value thanks to the huge commitment of its citizens in the struggle for liberation from the Nazi-fascist dictatorship.


The vicissitudes of the city are told in many urban museums. From the Civic Museums of Palazzo Farnese, which include the Picture Gallery with a precious Tondo by Botticelli, to the Museum of Risorgimento, the Archaeological Museum with the famous Etruscan Liver, the Armoury and the fairy-tale Coaches Museum, to the Diocesan Museums with Kronos – Cathedral Museum, from the Alberoni Gallery with the Ecce Homo by Antonello da Messina to the Ricci Oddi Gallery. Also the Antiquarium Santa Margherita, which preserves stratified traces of the two thousand year old town history, and the POGaM – Piacenza Oil & Gas Museum, which explores the theme of hydrocarbons from a geological point of view and recounts the oil epic from POGaM up to the industrial phase and the Museum of Printing dedicated to all the typographic instruments used until the 80s.


The charm of the Farnesian memories in the city gives way to the unaltered splendor of villages and castles set in the Apennines, to the peace of paths (even spiritual) immersed in nature, to Verdi’s music.
Get lost in the streets and alleys of Bobbio, Castell’Arquato, Vigoleno will make you jump through time, while you could feel like young princesses and knights in the castles of Gropparello, Rivalta and Agazzano, even with the possibility of suggestive overnight stay.
We recommend a couple of stages to nature lovers – on foot or by bike – of the Via Francigena.
It could be interesting to discover the farmer spirit of the composer Verdi who chose, as a source of inspiration, his intimate refuge in Piacenza, obviously tasting the local food& wine, which boasts 2 kinds of cheese and 3 PDO cold cuts and 17 DOC wines.

HOW TO GET THERE


The Bologna International Airport “Guglielmo Marconi” is about 150 km from Piacenza by motorway and can be reached in about 1h and 30 minutes, even with shuttles or private cars. Other airports closest to Milano Linate, Milano Malpensa, Brescia, Bergamo Orio al Serio, Verona and Genoa.


From the station of Piacenza, 10 minutes walk from the historical center, you can reach in about 1 h and 20 minutes (less than 2 h with regional trains) the railway junction of Bologna and from here connect with the rest of Italy and Europe: www.trenitalia.com