About 25 km from Parma and around the first hills of the Apennines, rises the Varano de’ Melegari Circuit which boasts over 40 years of experience in the world of racing and road safety and it still is one of the excellence spots of Emilia Romagna’s MotorValley. 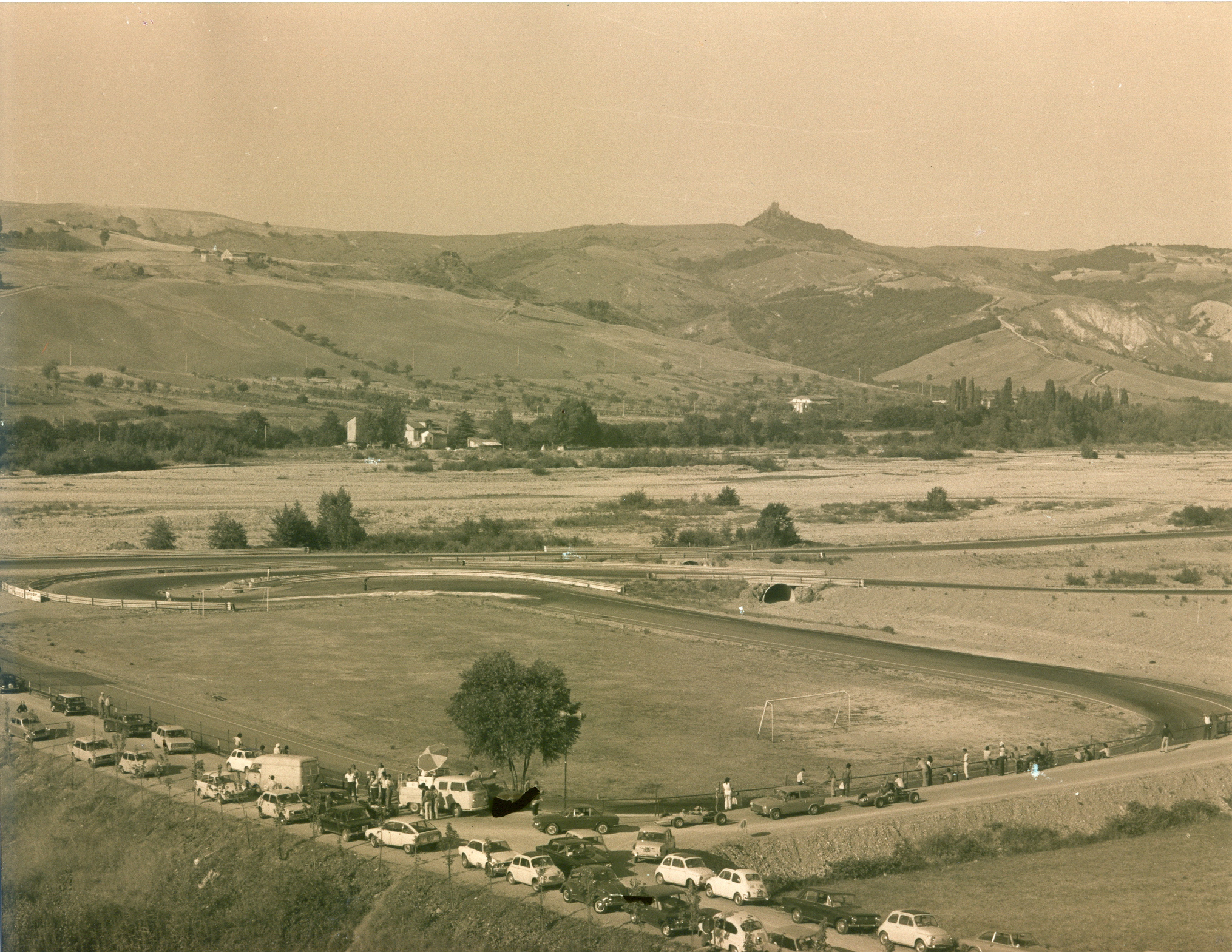 The Riccardo Paletti Circuit in Varano Melegari, Parma, was built at the end of 1969 thanks to a group of local enthusiasts led by Ennio Dallara, Romano Meggi, Giuseppe Dalla Chiesa, the Mayor Giorgio Bonzani and the engineer Giampaolo Dallara; the original track whose asphalt was stretched by the Ennio Dallara company with the involvement of several local truck drivers, measures 550 meters and, apart from a small variant on the north side, virtually delineated the municipal soccer field. The development continued in 1971 with the first stretch of track that was brought to the length of 1200 meters.
Meanwhile, the Autodrome was dedicated to San Cristoforo and in the summer of the same year, the circuit was also used by Ferrari with the legendary F1 312 B, led by Jacky Ickx. The Belgian Champion, after spinning some laps, missed the brakes out of the bend near the bridge, a turn that from that moment was dedicated to the Belgian ace. In 1972, a further stretching of the straight line was achieved with the forward movement of “Parabolica” and the new track was inaugurated on March 26 with the first Trofeo Automobile Club Parma; obviously the infrastructure was still lacking and the timekeepers had to find a place on an agricultural wagon at the edge of the asphalt. 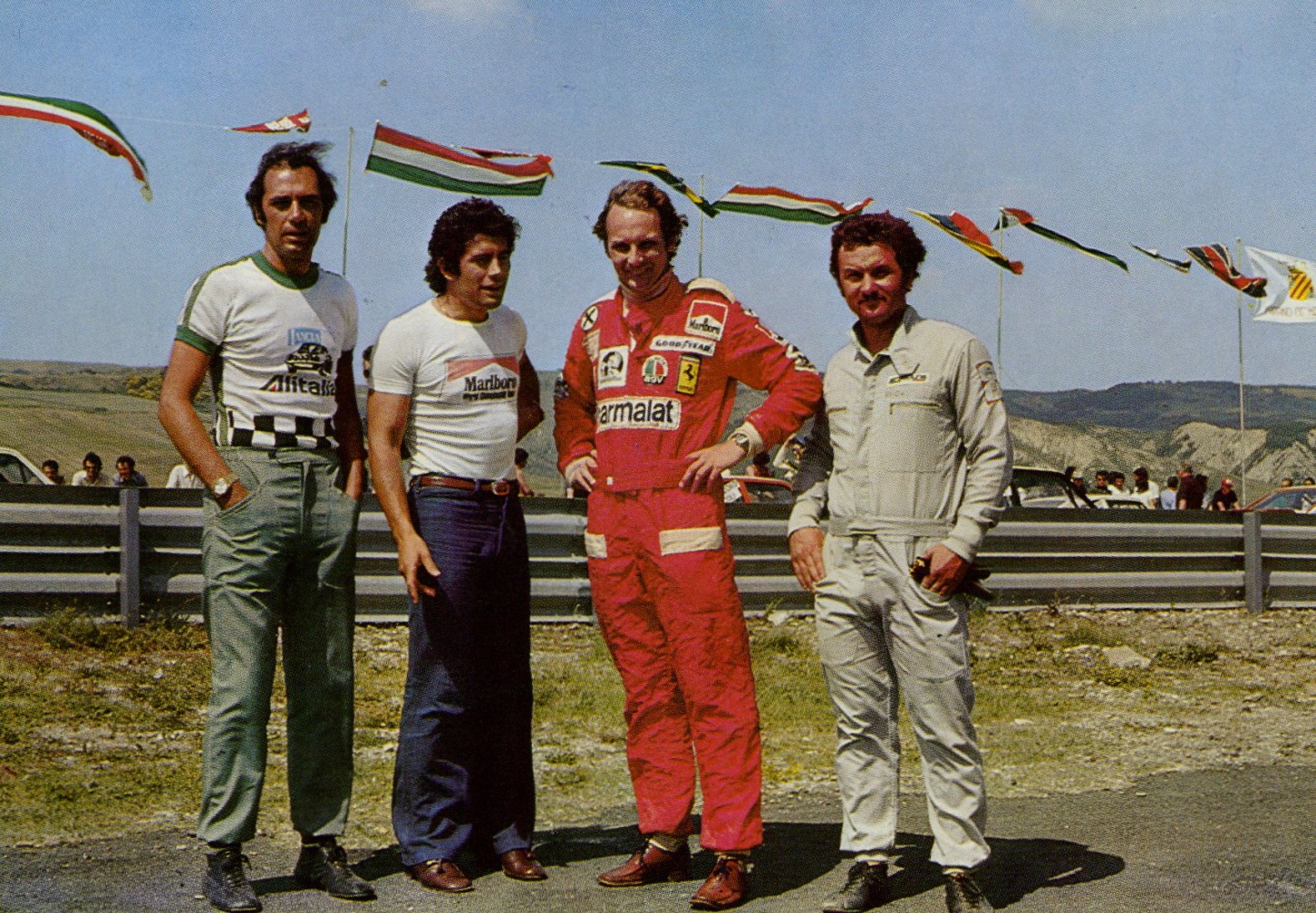 An unforgettable date for the Autodrome in Varano de’ Melegari was certainly the June 2nd, 1976, when Alfa Romeo and the weekly Autosprint organized a challenge among the most famous Formula 1 riders to raise money to be allocated to the Italian region of Friuli, hit by a terrible earthquake, in which Niki Lauda, Clay Regazzoni, Emerson Fittipaldi, Depailler, Schekter and many others showed up their driving skills to the public.
In 1983 the official name of the circuit was replaced with “Autodromo Riccardo Paletti“, and the circuit was dedicated to the young Formula 1 driver, which grew agonistically in Varano, and who lost his life in the Grand Prix of Canada. Since 1991 former Formula 1 driver Andrea De Adamich has established here in Varano the Safe Guide International Center, which regularly runs courses with Alfa Romeo and Maserati cars.
Another date to point out is February 22th, 2002, when the new track was officially opened, and the circuit passed from 1800 meters to 2375. Over the years the track is further modified, thus taking on the look of today with the 2350 meters of length, constantly growing both at infrastructure level with paddock adaptation, building a building for offices and the press room, box and restaurant, both at a security level that allowed to obtain the international FIA license. 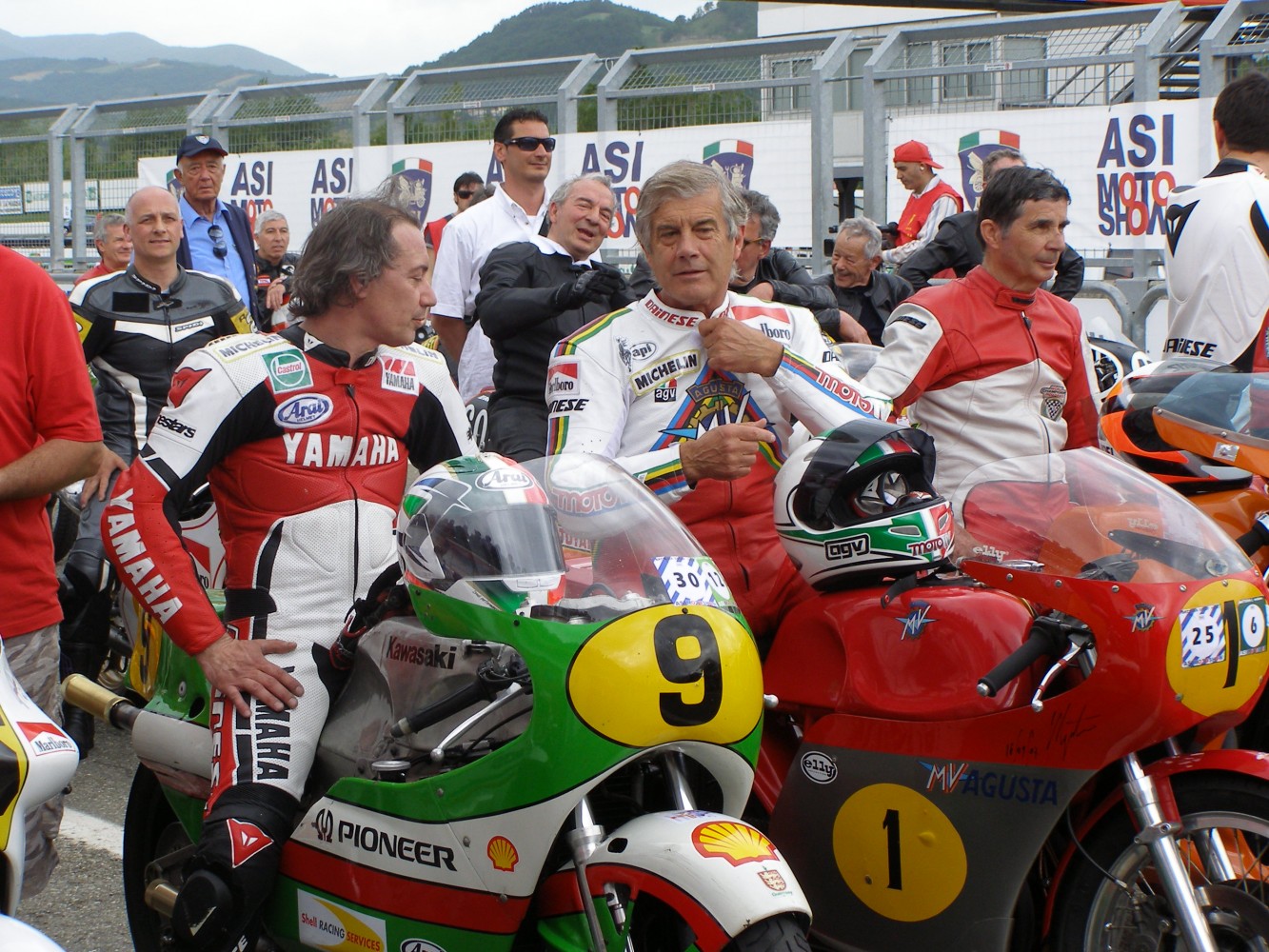 The Moto Champions Giacomo Agostini and Luca Cadalora during an event in Varano – Ph. Varano Circuit

The Autodromo Riccardo Paletti in Varano de’ Melegari has been and is still a gym and stage for many young riders who have become champions such as Alessandro Zanardi, Giancarlo Fisichella, Alessandro Nannini, Luca Badoer and the current Ferrari F1 driver Kimi Raikkonen, without forgetting two world champions such as Jacques Villenueve, who made Varano the first steps in Formula 3, and Valentino Rossi, who was a frequent driver of the circuit at a very young age. 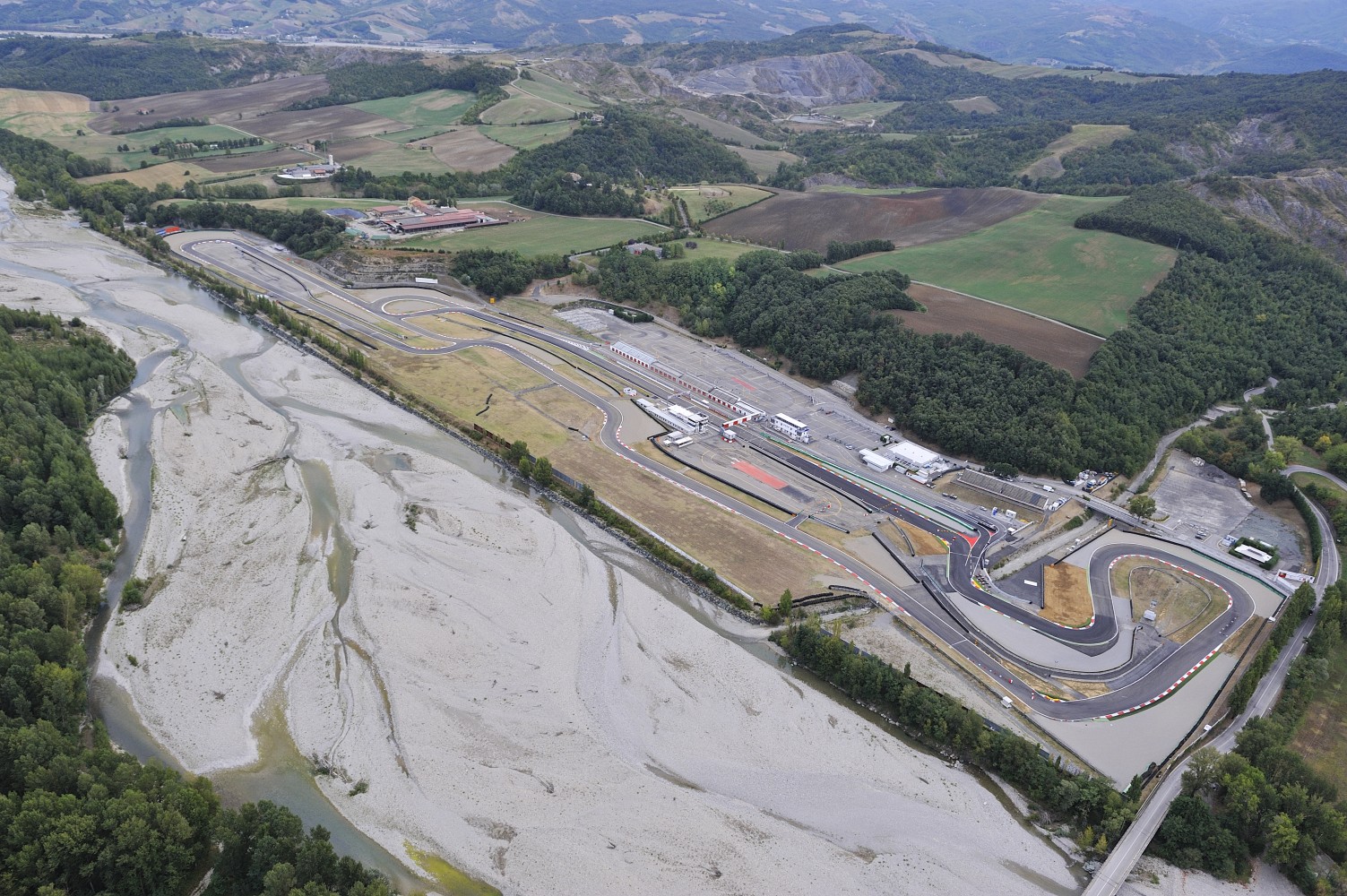 The Riccardo Paletti Circuit has a length of 2,350 meters in its long version and 1,640 m in the Short Track version. It has a not long straight of about 460m and runs along a total of 14 curves, 6 on the right and 8 on the left. It can accommodate about 4,000 viewers and can be adapted for Rally and Supermotard races. For all those who want to try the excitement of running within the Racetrack, there is a Kart Track as well as the possibility of booking free practice sessions according to availability in the Calendar.
For all those who want to attend the organized races of the Autodromo, we recommend that you consult the full schedule on the official website.

How to reach the Varano de' Melegari Circuit

The Varano Racetrack is located in Via Strada per Fosio, 1 – Varano de’ Melegari (Parma) and it can be reached:

By Bus
From Parma take the local TEP Bus to Varano de’ Melegari.