The production of genuine Parma Ham is the story of a special relationship between man and nature.
Since Roman times, the unique conditions of the Parma region have made it possible to produce the highest quality hams, that have been appreciated by gourmets for centuries. ‘Prosciutto’ is from the Latin ‘perexsuctum‘ meaning ‘dried‘ – an indication of the purity of Parma Ham production and its ancient roots.
It was in 100 BC that Cato the “Censor” first mentioned the extraordinary flavour of the air cured ham made around the town of Parma in Italy; the legs were left to dry, greased with a little oil and could age without spoiling. A tasty meat was obtained which could be eaten over a period of time while maintaining its pleasant flavour. Even earlier, in 5 BC, in the Etruscan Po river valley, salted preserved pork legs were traded with the rest of Italy and with Greece.
The similarity between present-day Parma Ham and its “ancestor” is evident and nowadays the tradition of Parma Ham is as strong as ever. 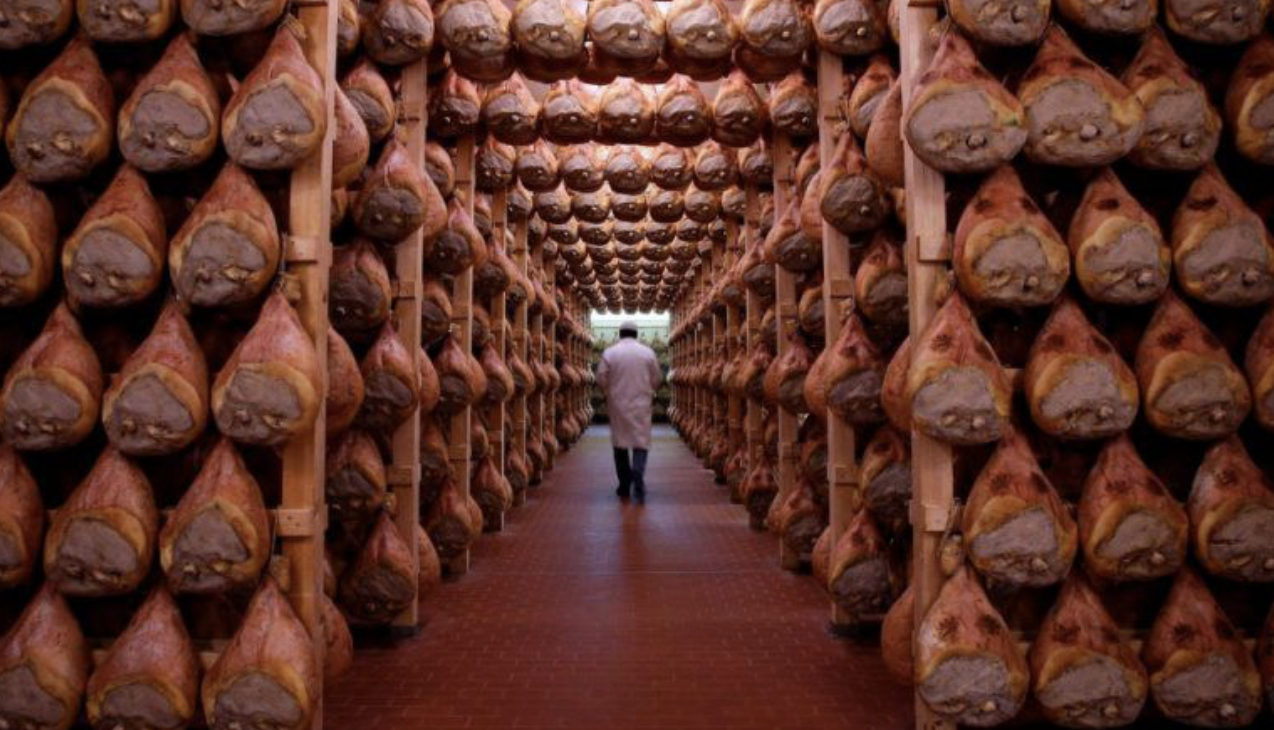 Coming to the present days, since 1996 Parma Ham has obtained the Denomination of Protected Origin (PDO) recognition and is controlled by a strict product specification, which is a real guarantee of quality.
Perhaps not everyone knows that, for example, the only permitted preservative -and in a smaller quantity than other types of ham- is salt: therefore, it bans all other types of additives.
Another essential condition for obtaining the real Prosciutto di Parma is that the entire processing takes place in an extremely limited area of ​​the province of Parma, the one located south of the Via Emilia, at least 5 km from it, below the 900 mt of altitude, bordered to the east by the Enza stream and to the west by the Stirone stream. The bulk of the production is therefore concentrated around the village of Langhirano. Only in this area there are all the ideal climatic conditions for the natural seasoning, which gives sweetness and taste to Parma Ham.

If you want to enjoy it at best here’s a simple recipe that enhances the taste of Parma Ham (thanks to Academia Barilla):

PUFF PASTRY TRIANGLES WITH PROSCIUTTO CRUDO AND CREAM OF FIG

Preparation:
Pull apart the puff pastry until the pieces are about 5-6 millimeters thick.
Once pulled apart, cut into triangles with a pasta or pastry cutter.
Butter or cover a baking sheet with oven paper and place the puff pastry on top. Bake at 180° C (355° F) for about 5 minutes.
Once cooked, remove from the oven and let cool.
Meanwhile, wash the figs and blend them in a food processor until creamy.
Arrange three puff pastry triangles on a plate, alternating prosciutto slices in between, for three layers. Garnish with the cream of fig and serve.