Fiumalbo: a stone gem at the foot of Mount Cimone

If you imagine a land of pristine landscapes, with woods and meadows and burbling streams, a place where time seems to have decided to run backwards, then the picture in your mind’s eye will look something like Fiumalbo. This small town rises among oaks and beech trees, in the shadows of old medieval traditions, and is rightly considered one of the loveliest in Italy. Appropriately, it is a member of the Borghi più belli d’Italia association, and the Italian Touring Club awarded it Orange Flag status in 2001.

Round and about, the 15,000-hectare Frignano Park sets the tone with its impressive natural beauty. Modena is not far away (less than 50 miles), but Pistoia province is just 7 miles or so over the Abetone pass. Which all makes the 1200 good burghers of this little Emilia-Romagna municipality much closer, linguistically at least, to the people of Liguria and Tuscany, especially as far as some old dialect words are concerned.

But Mother Nature is the real lady of the manor here, bestriding a stage featuring the highest peaks of the High Modena Apennines: Mount Cimone (2165 m) on one side and Mount Lagoni (1962 m) on the other. 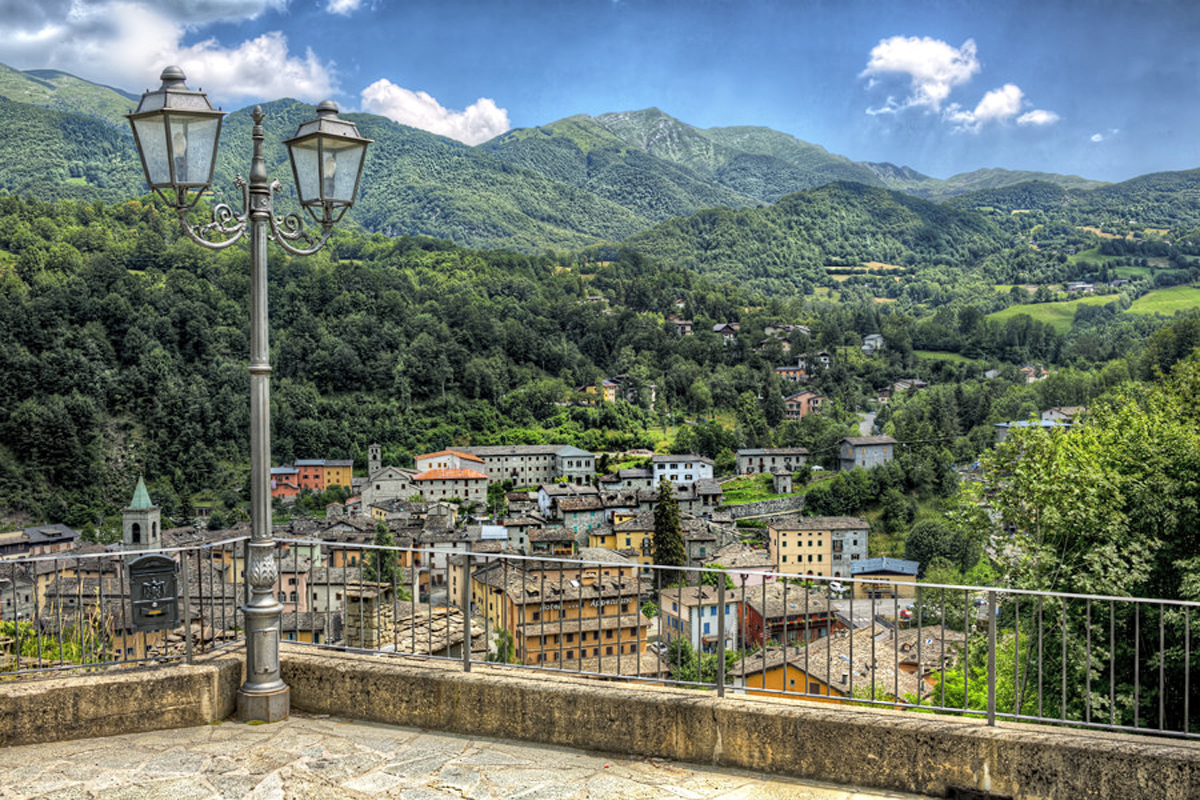 A postcard from Fiumalbo | Photo by Giuseppe Moscato, via #Flickr

Paths, mule tracks and ancient mountain ways bear witness to the history of this little town, connecting the Po valley to the Tyrrhenian coast via the Apennines. This is an area that people have passed through for millennia, since Roman times and even before (with the Celts).

The earliest settlements date back to the time of the Ligurian Friniati tribe, who sought refuge here in 175 bc after being defeated by the consul Marcus Claudius Marcellus. The settlement was first mentioned in 1038, when Marquis Bonifacio, father of the famous Matilda of Tuscany, presented the Bishop of Modena with “the Citadel called Fiumalbo”.

As far as we know, and judging from the ruins that remain, the town must have comprised a fortress with three towers, old St Bartholomew’s church, a fortified hamlet and a monumental entrance gate.

Under the Estense family’s protection, Fiumalbo kept its typically isolated mountain character for centuries. The first significant developments occurred in the 17th century, followed by major rebuilding work after the 1920 earthquake, when part of the village was destroyed. 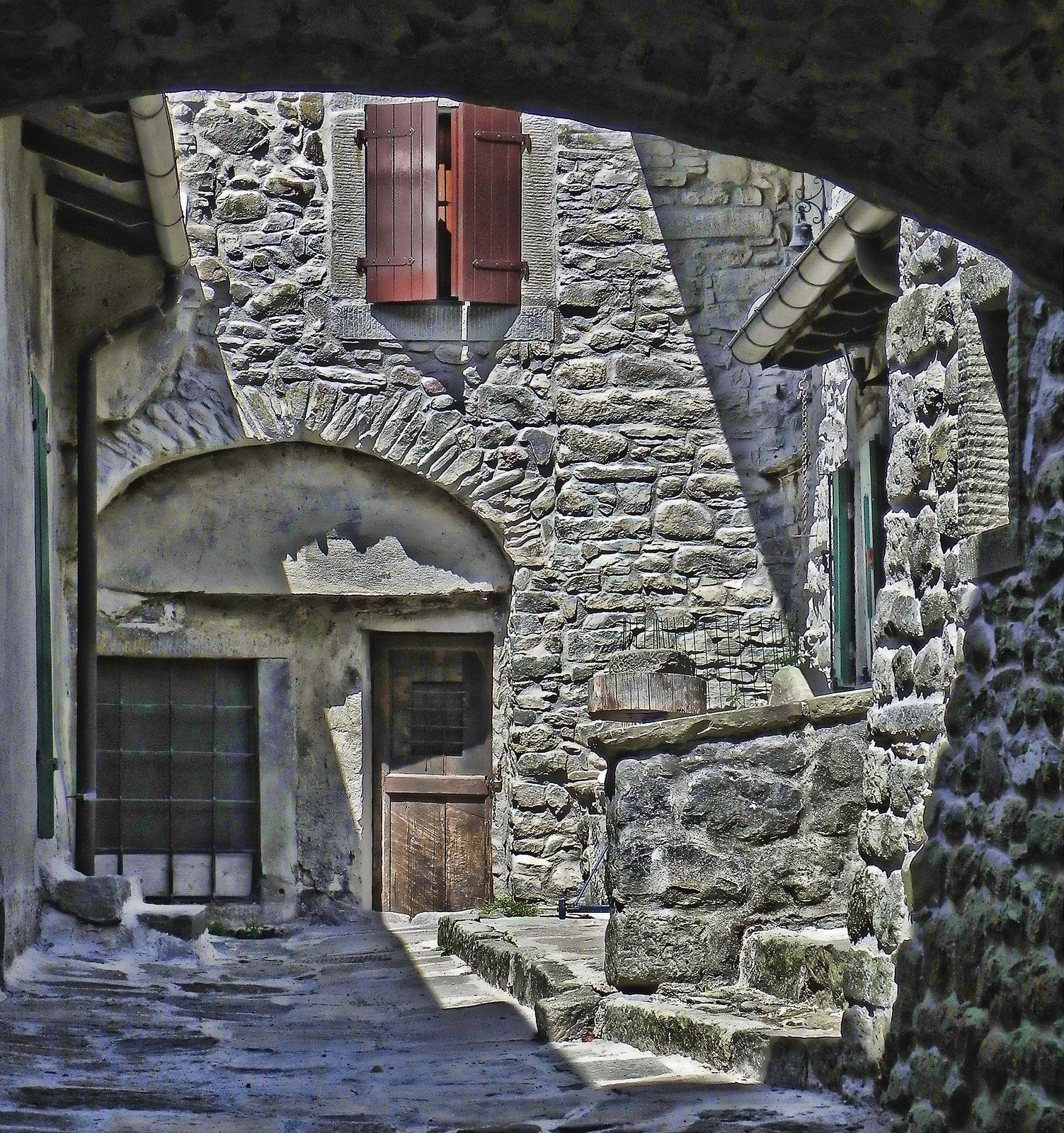 In the streets of Fiumalbo | Photo by Maurizio Buzacchi, via #Flickr

Fiumalbo is rather tucked away out of reach, surrounded by brooks and mountains, with no trunk roads in sight. This isolation has helped, however, to preserve its character and structure, a constant reminder, centuries later, of its medieval origins. The old centre is criss-crossed by little streets among stone buildings, many now renovated, with little squares and up-and-down lanes leading to districts perched high up.

A building worth a good look is the church of San Bartolomeo Apostolo, the town’s focal point and main place of worship. It was erected in around 1120 and rebuilt in 1592. Inside, there is some fine work by Wiligelmo (11th–12th centuries) – one of the first Italian sculptors to sign their work – as well as some interesting paintings, with a Virgin with Saints attributed to Saccaccino Saccaccini da Carpi from the first half of the 16th century. 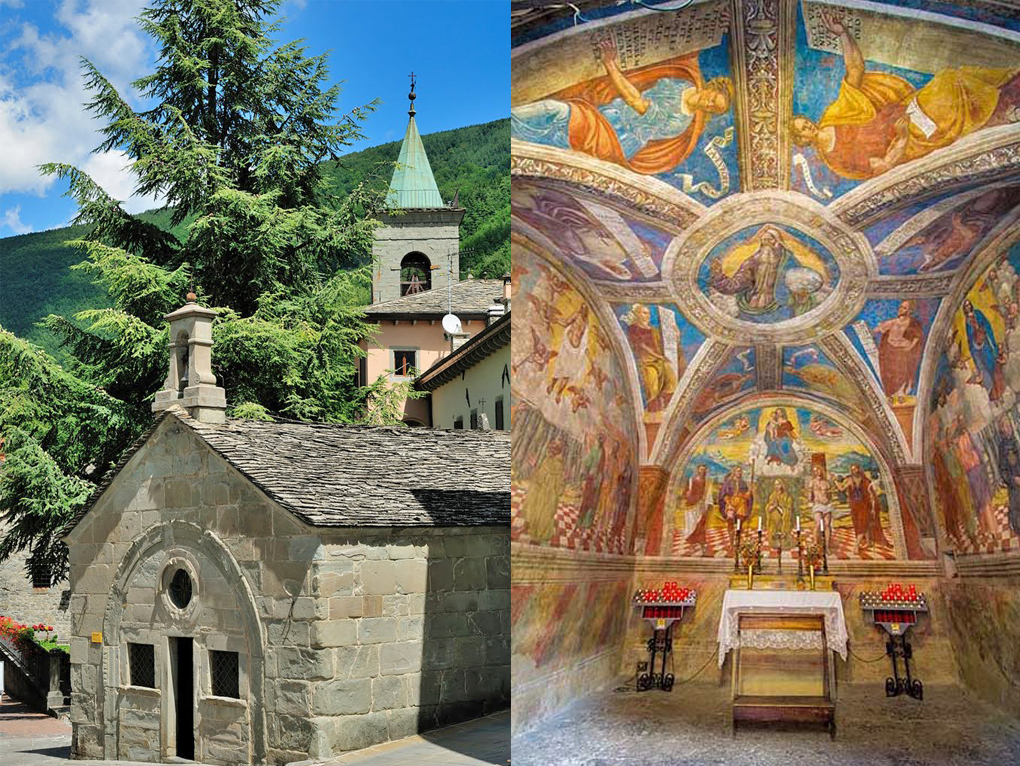 Opposite is another church, the Immacolata Concezione, also known as the Chiesa dei bianchi or church of the white-robed ones (after the confraternity based in the nearby oratory); according to an inscription over its faded entrance door, it was built in 1516. Not far away, the Church of St Catherine of Siena or Chiesa dei Rossi (of the red ones) dates from 1601 and houses a museum of sacred art.

The Renaissance Oratory of San Rocco at the town gateway is also well worth visiting. It was built in the early 16th century in great sandstone blocks and frescoed, like St Bartholomew’s, by Saccaccino Saccaccini. And then there’s the church of San Michele Arcangelo, the church of Santo Donnino and San Francesco, and the Oratory of the Costolo, all spanning a long era of local history.

But Fiumalbo’s history appears to stretch much farther back than the Middle Ages. In the hamlets of Doccia, Valdare and all over the hillsides below Mount Cimone, odd little stone-and-dirt huts that the locals call casoni have strong echoes of the Celtic culture that must have reached this part of Italy in the 4th century.

Add to that the Margolfe, small stone sculptures of female faces adorning many buildings in the town, which are linked to superstitious beliefs, although no one knows exactly what period they date from. 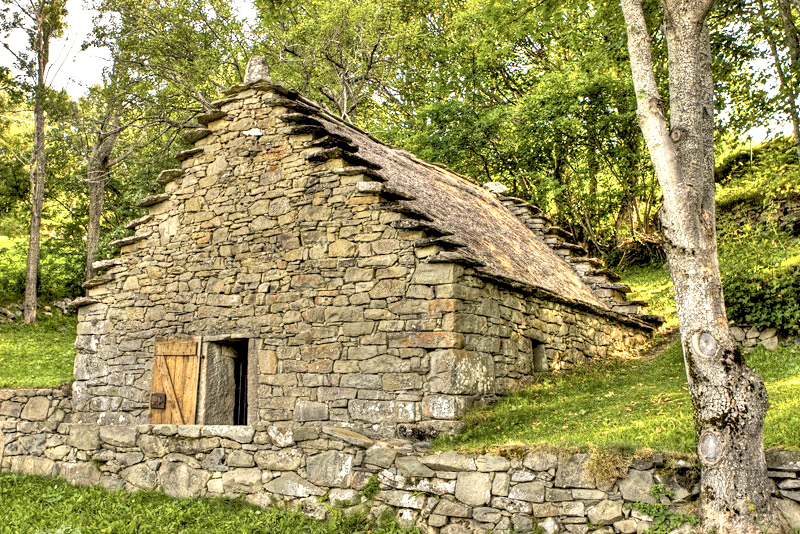 SPRING
– When the snow melts, it’s time to dust off your hiking boots. There are many trails from the valley bottoms up to the area’s main peaks. Best foot forward!
– Take a trip to Lake Santo, a stretch of glacial melt water 1501 metres up in the mountains.
SUMMER
– Work up a thirst with a long walk or mountain-bike ride in Frignano Park through fir and beech woods, and slake it at the crystal-clear water sources.
– Explore the Modena Apennines on horseback.
AUTUMN
– The woods of the Tuscan-Emilian Apennines are a feast of autumn moods and changing colours.
– The whole Fiumalbo area is perfect for mushroom lovers, so grab a basket and go hunting!
WINTER
– With their 30-odd miles of slopes, Mount Cimone and Mount Abetone are the biggest ski areas in the northern Apennines.
– A long snowshoe walk in the mountains between Abetone and Fiumalbo is de rigueur.

Throughout the year, Fiumalbo offers a varied programme of events, many with historical traditions behind them, for townsfolk and visitors alike.
First up is the carnival procession that has lit up the night of Shrove Tuesday for over five centuries – since 1512, to be precise. This long twinkling parade of countless little torches made of birch wood and rags aims to consign every bad memory from the previous year to history.

Every spring in late May or early June, depending on the liturgical calendar, the “infiorata” of Corpus Domini is celebrated, with a procession through the streets over elaborate floral carpets lovingly created for the occasion by the locals. 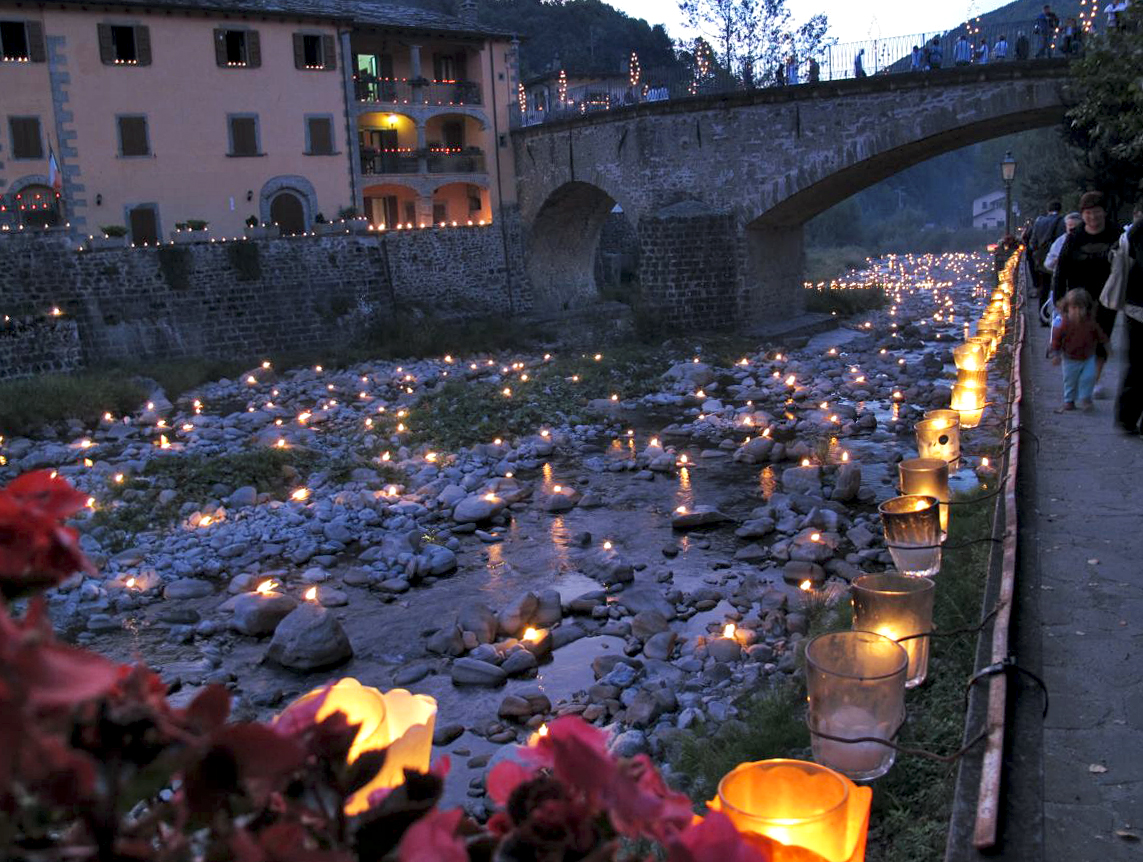 Celebration for San Bartolomeo | Every day on 23rd August

The late-summer festival of St Bartholomew has always been a source of local pride. Every year, on the night of the 23rd of August, the whole town lights up with flashlights, small lamps, candles and flaming torches, creating a magical, almost unreal atmosphere. The festivities include a procession when the Red and White confraternities bear the statue of the saint around the streets, the traditional market with hundreds of stands, and a magnificent firework display, culminating in a game of bingo involving the whole town.

Finally, Christmas brings the famous living crib every other year, where the nativity story is played out in the town’s streets and lanes by the gentle light of torches, with shepherds, masons, millers and other ancient trades to set the scene, along with hundreds of extras and animals.

As with its language and culture, Fiumalbo’s food and wine have also been influenced by its position on the cusp of both Tuscany and Emilia, resulting in a mix of their culinary traditions.

On one hand, then, there are crescentine, borlenghi (thin crepes stuffed with pork lard and cold cuts), tortellini and tortelloni (traditional home-made pasta) – all traditional Modena dishes. And on the other, we find the black cabbage soups, beef steaks, and game and mushroom dishes that are typical of the mountains.

As for desserts, the undisputed king is almond brittle – a local invention, some claim, comprising a mixture of chestnut honey, thin almonds, sugar, caramel and a dash of natural flavouring.
Like any good mountain area, the Fiumalbo district is also a generous source of blackberries, blueberries, raspberries, ceps and chanterelles from the undergrowth and produces excellent cheeses, cold cuts and meats from animals reared in the hills.

How to get to Fiumalbo

Fiumalbo is about 50 miles from the A1 motorway. The town is on the SS12 near Abetone, a main road from Pisa to the Austrian border. Local bus services are also available.