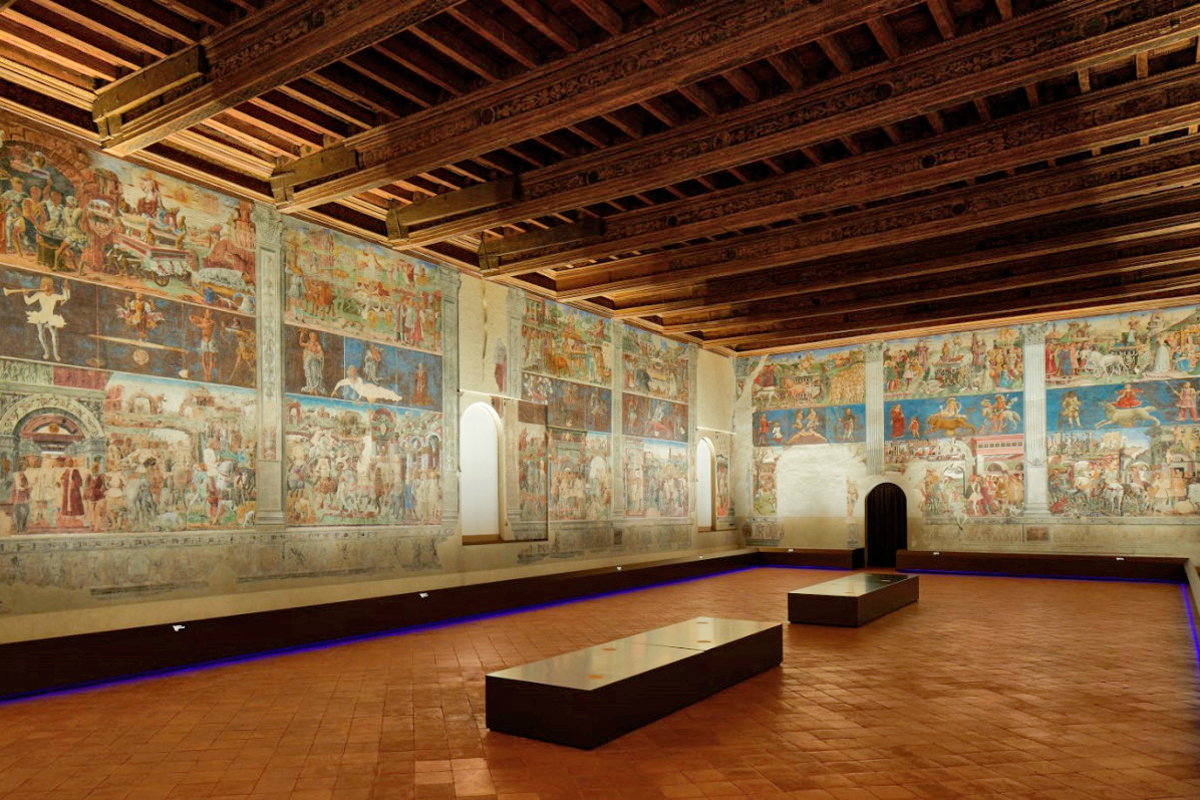 Think about the wide horizon that mark today the Po Valley in the area of Ferrara. Try for just one second to play with your imagination: We’re in the full of Renaissance and in front of us is a far different territory from the one we’re used to see these days. It is rich of water streams, all connected with one another, and forests, in a perfect balance with the land surface.

The extensive estates in the country, with their sumptuous palaces and lavish gardens make everything look perfectly coordinated and tidy, with their rare plants, exotic animals and strange architectures. Your thoughts are running to already known cities, but the landscape surrounding you is not lying: it’s open country.

Between the fifteenth and the sixteenth century, the dukes of Ferrara started to redesign the landscape, which had to mirror their greatness and good rule. They meant to build villages, streets and water drainage canals and, more in general, to tame the territory around the city, following the rules of order and beauty they were so attached to.

The crossway of this new city plan were the DELIZIE ESTENSI, sumptuous noble residences built by the dukes of Ferrara in the reclaimed lands of the Po Valley, with the aim of illustrating to the world their power and influence over the territory.

Although they were supposed to be places of leisure and free time of the noble families, the “Delizie” were by all means also economic and administrative coordination centres of a highly unstable territory, due to the hydrogeological character that marks all the lands of the Po Valley.

Even though many of those “Delizie” and their gardens have disappeared, the original urban design has remained, still perfectly legible in the landscape.

For this reason, UNESCO, as soon as it noticed the extraordinary project carried out by the Este family, acknowledged the “Delizie” as World Heritage in 1999, by virtue that they “illustrate the influence of Renaissance culture on the natural landscape in an exceptional manner”.

Despite some “Delizie” are in a state of abandon or have been modified by architectural interventions, others are still visible and have undergone a series of restoration works, even recent ones, encouraging a musealization and enhancement project of the territory in order to build new itineraries of tourist interest.

Overlooking the current Via Scandiana, near the Basilica of Santa Maria in Vado, in the south-eastern area of Ferrara, PALAZZO SCHIFANOIA is one of the most enchanting and emblematic residences of the Este family.
Built in 1385 within the city walls, in a wide green area near the Po river, it is today the result of several structural changes and extensions carried out over the centuries.

The name literally means “loathing boredome”, and as a matter of fact it was requested by Alberto V d’Este as a refuge where to abandon oneself to the otium, enjoying the pleasures of eating and resting.

Today, it hosts the Musei Civici d’Arte Antica di Ferrara (City Museum of Ferrara Ancient Art) and is famous for the inner decorations, of which the Months Room (Salone di Mesi) definitely deserves a mention. It is a large frescoed cycle painted by the best painters of Ferrara of the time (1470), and experts consider it one of the highest examples of Italian Renaissance art linked with the Estensi. 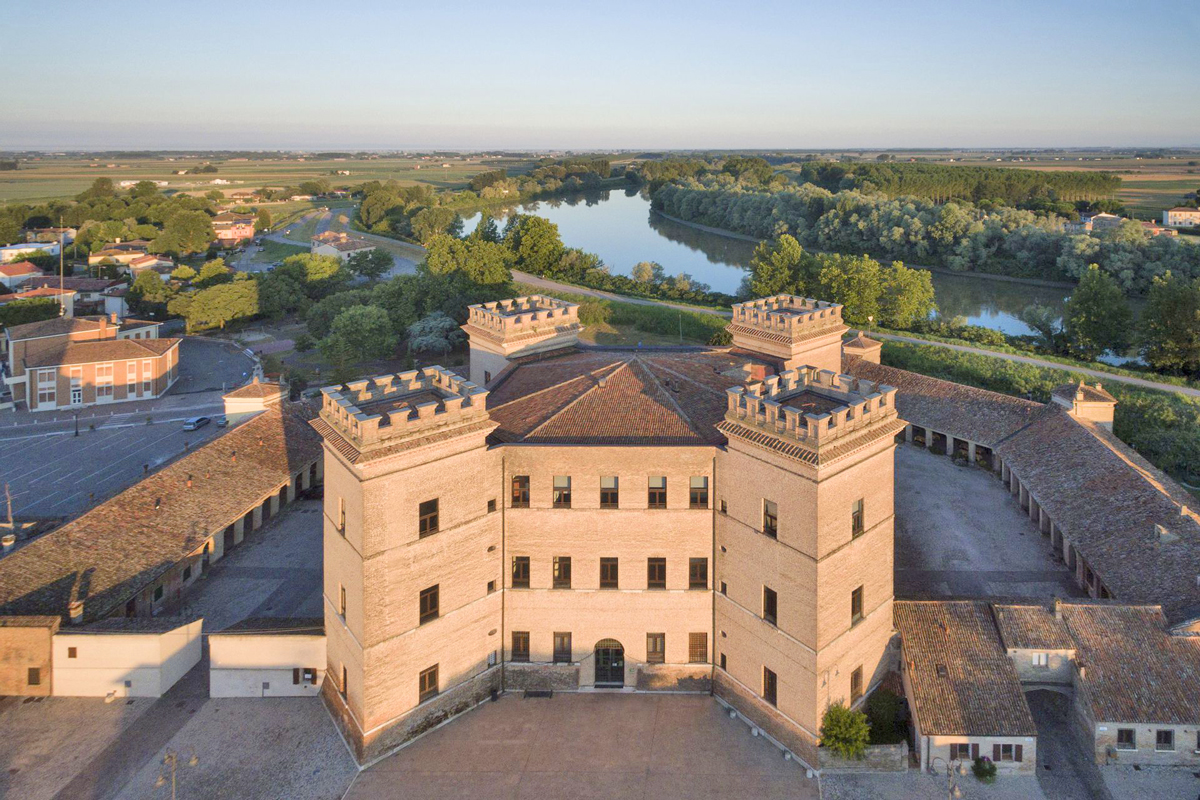 Built by the last duke of Ferrara, Alsonso II, to homage his third wife, Margherita Gonzaga, the splendid MESOLA CASTLE (Mesola, Ferrara) is one of the most recent “Delizie” built on the territory of Ferrara.

The surrounding vast forest hunting ground as well as the four imposing towers, crenellated walls and huge windows make the castle look solemn, yet at the same time elegant.

The castle was started in 1579 and was completed in 1583. Of the 12 km-long city walls that originally surrounded the building nothing is left today. Just the old services structures are still standing, but they now have turned into shops and restaurants, and of course the castle itself, site of the The Wood and Deer Museum of Mesola, the giant guard that protects the whole surrounding area. 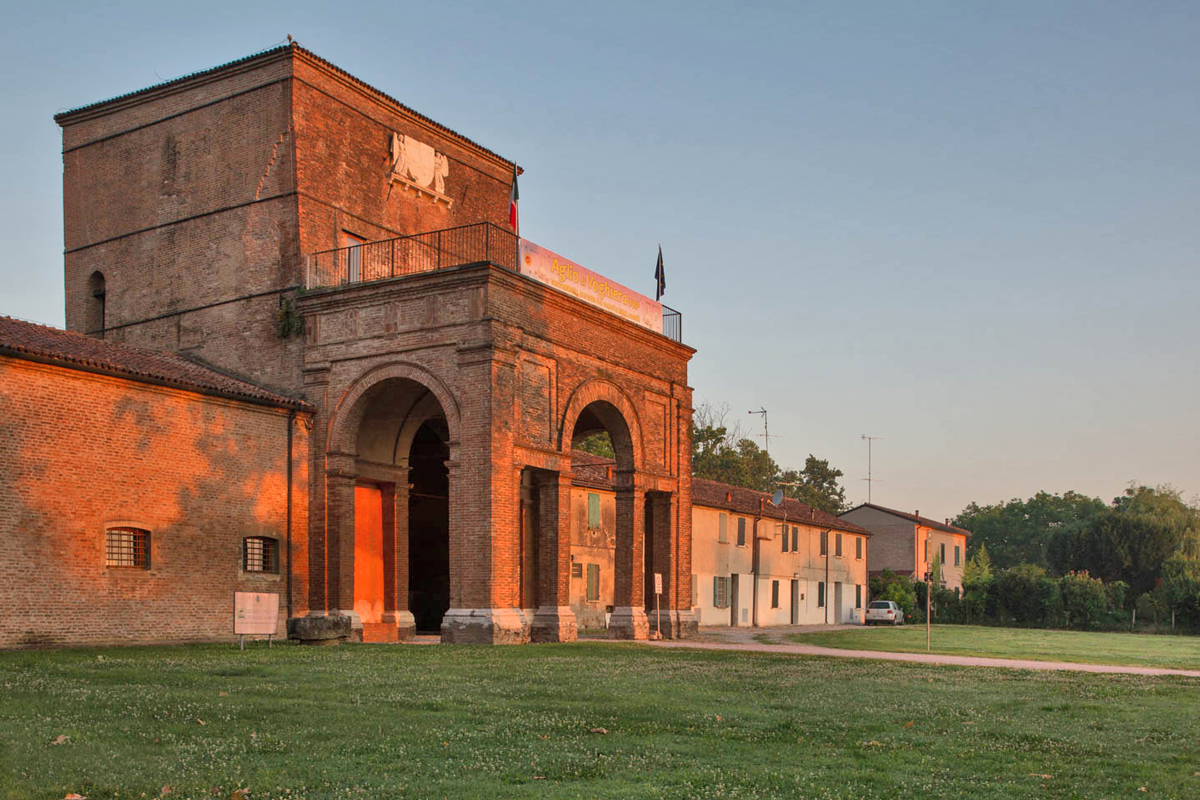 Among the most somptuous Este residences, DELIZIA DEL BELRIGUARDO (Voghiera, Ferrara), was built by Niccolò d’Este in 1435 and was the first residence outside the walls of Ferrara.

Designed as a summer estate, following the typical scheme of the “ancient villas”, it originally had dozens of rooms frescoed by the greatest artists of the time, porticoed courtyards and over 30 hectares of gardens in the Italian style (from above you can still read their geometries), which bestowed on the residence the nickname of “Italian Versailles”.

Little has remained of that original splendour. After the Este family moved to Modena and Reggio Emilia, the reisdence was converted into several abodes and the great frescoed rooms were used as stables and barns for animals.

Nonetheless, the Sala delle Vigne is today part of the Civic Museum of Belriguardo. Inside, the museum includes the Renaissance Section with ceramics dating back to the 15th and 16th century as well as documents on Belriguardo, the Archaeology Section with finds coming from the Roman necropolis of Voghenza (1st – 3rd century aD) and, lastly, the Section of Modern Art. 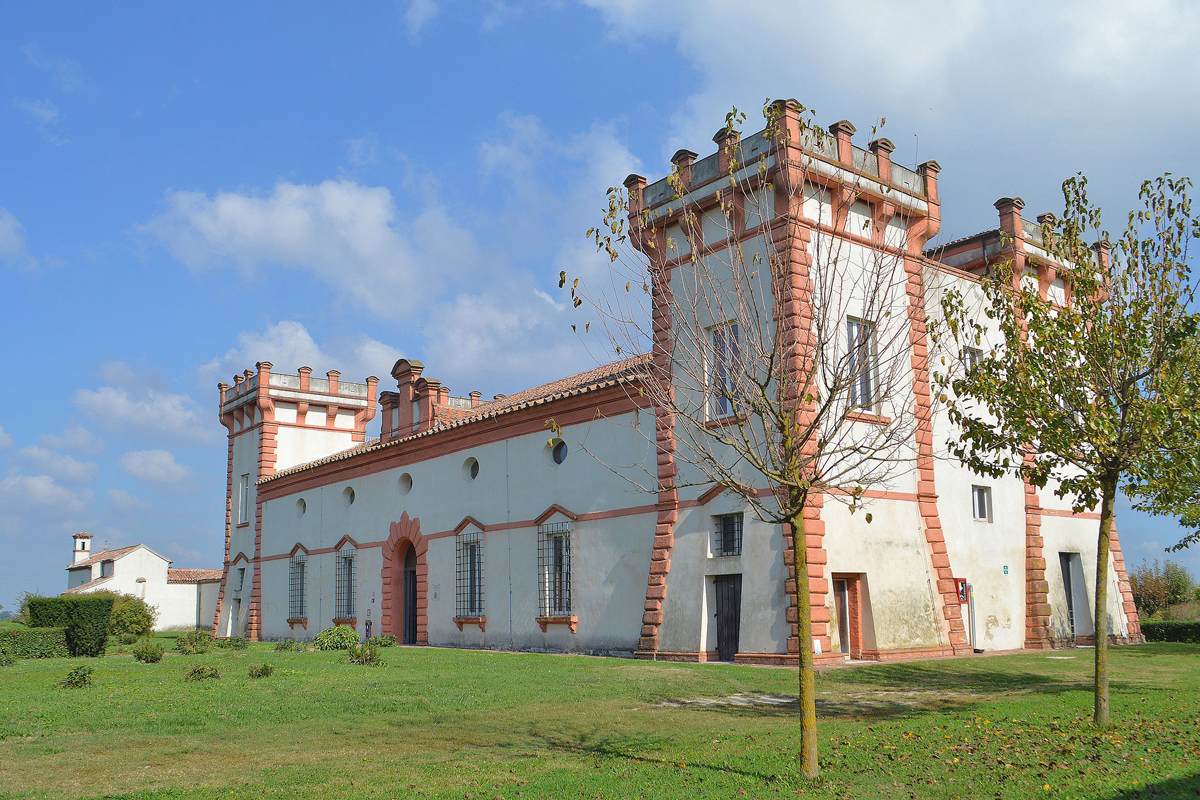 Originally built as a farmhouse (there are no certain information on its grounding still today), the DELIZIA DEL VERGINESE (Portomaggiore), whose name might recall a nearby canal, was turned into a ducal residence in the first half of the sixteenth century by duke Alfonso I d’Este and given as a gift to his lover Laura Eustochia Dianti (1534) after the death of his wife Lucrezia Borgia.

The “Delizia” looks like a little castle, embellished with merlons and surrounded by a splendid garden (Il Brolo), which offered fruits from spring to autumn, and followed precise geometrical rules according to the Renaissance fashion. By the edges of the green area a dovecote of the 16th century, beyond being home to pigeons, was a lookout tower.

In the outer architectural structure, medieval and Renaissance elements combine together. The inner stuccoes date back to the 18th century, just like the little church next to the castle.

The “Delizia” is today site to two permanent exhibitions: the first displays archaeological finds coming from a nearby Roman necropolis, the other is an exhibition of works by Mario Maranini dedicated to the local farmers 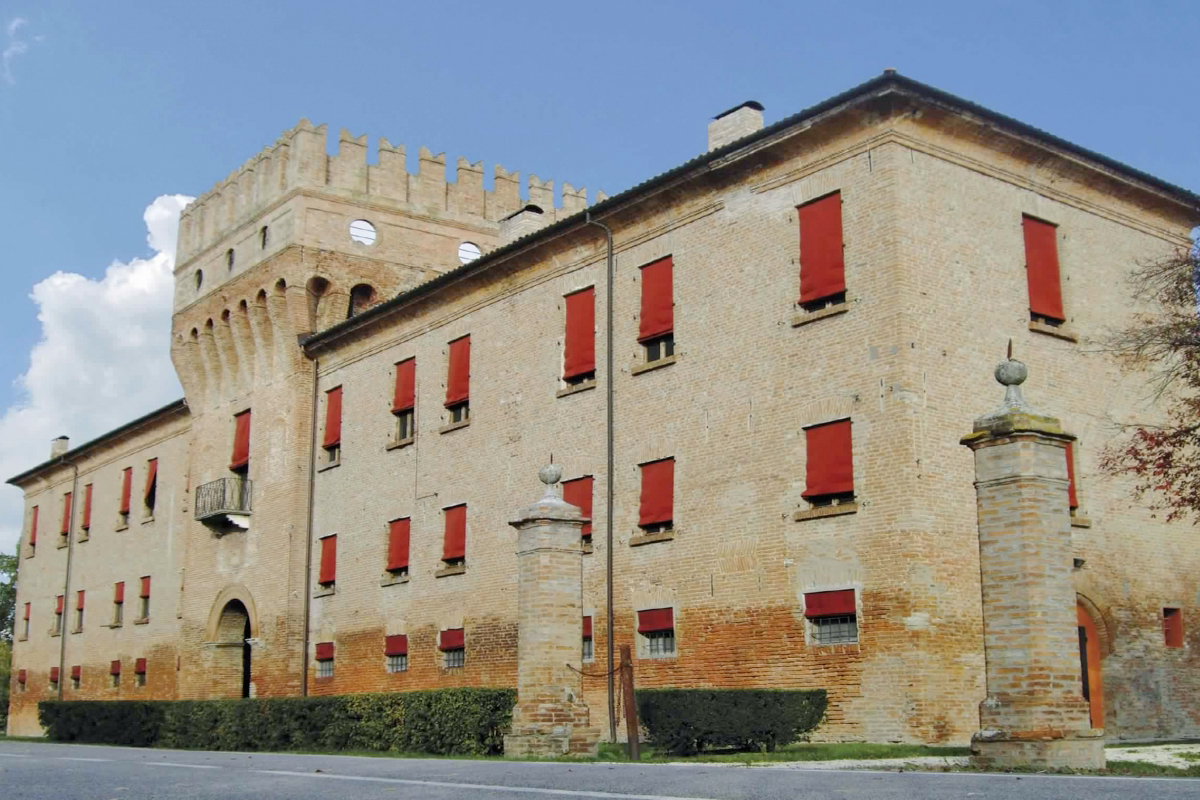 Built in 1464 by Borso d’Este, the DELIZIA DEL BENVIGNANTE (Argenta, Ferrara) since its creation seemed particularly attached to the figure of a clerk of the Este court, Teofilo Calcagnini. The duke Borso d’Este entrusted to the clerk the residence along with the attached properties, including an inn with rooms.

Calcagnini’s family kept the properties during all the period of the Estensi rule, hosting the nobles of the Filareti academy, who went there for the summer reunions.

After a series of events and passages of property occurred over the years, Benvignante is today owned by the Municipality of Argenta. The people of Argenta have affectionately nicknamed it “al Turòn” ― the dialect term for “big Tower”.

It has a square plan and is on two floors; the huge rectangular windows are symmetrically scattered on the main façade. Its strategical position overlooking all the surrounding lands and the imposing central crenellated tower suggest that the residence was not only meant for leisure and rest but had also a control function on the territory of Argenta.

The Delizie Estensi in the territory of Ferrara don’t end here, and the census has registered many others, but unfortunately not all are open to visits.

Some of them are private properties; others are undergoing restoration works or are temporarily closed, waiting to go back to their old original splendour and to their communities. 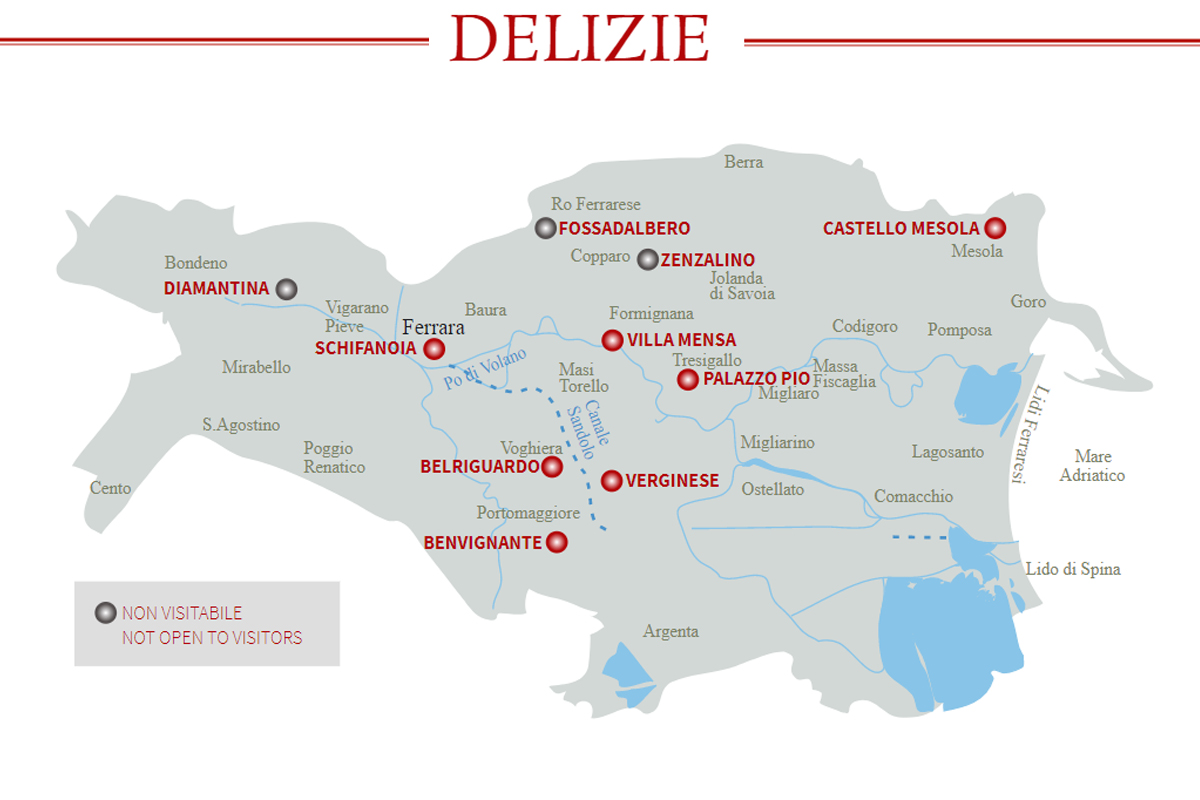 If you are bicycle enthusiasts, the so-called “Anello dei Borgia” is a very suggestive trail you could do. It’s an itinerary of about 40 km that departs from Belriguardo, crosses Benvignante and arrives to Verginese. We have already talked about it in this article.

For further information you can always go on www.ferraradeltapo-unesco.it: you will find everything about the Unesco Site of Ferrara and the Unesco Site of the Po Delta Park, including all the reasons why they have deserved to be awarded as unique places in the world.