Carnival in Emilia Romagna | Journey through the traditional masks

Carnival has ancient origins. From the Dionysian rites of ancient Greece to the Saturnalia of Romans this festivity has always represented the “end” and the “new beginning”: interpreted through times as a new beginning of the cycle of communities, of agricultural work, up to arrive at the Carnival as the beginning of the Lenten fasting period, in preparation for Easter.

The masks of Carnival have a meaning that refers to this rite of suspension of values, even if today’s versions derive mainly from the theatre. In particular, the Commedia dell’Arte and the popular puppets theater have given life to human types and characters that have become part of the national traditions and bearers of vices and virtues.

We are talking about figures, mostly comical, that have given consistency to characters who have embodied socially disreputable models or bad habits. From this point of view, therefore, telling the history of Italian Regional masks is also a tale of the story of humanity, in its strengths and weaknesses, that inhabited Emilia Romagna.
This long preamble helped us to prepare the ground for the real question we want to ask you today: do you already know all the traditional carnival masks of the Emilia Romagna region?

It is the best-known of the traditional characters of the Emilia Romagna Carnival.
The character of Balanzone came from the world of puppets of Commedia dell’Arte and its name Balanzone derives from “bala” (dialectal: lying) or from “balanza” (dialectal: large scale), a symbol of justice and of its law studies.
To certify his membership in the oldest University in Europe, he wears the uniform of the Alma Mater professors: a black toga, a white collar, cuffs, a big hat, jacket, and cape.

Fagiolino is the only mask that comes from the underclass, and from the stage of puppets. It has a name and a “surname”, Fagiolino Fanfani, a mask created in Bologna by the famous puppeteer Cavazza. In popular tradition, Fagiolino represents the brat of the slums of nineteenth-century Bologna, always hungry, dirty, and ragged.
The name can derive from “beech” (the wood of his stick) or from “bean”, the legume at the time eaten by poor people.
Isabella is his wife whom he calls, with affectionate insolence, “Brisabella” (which means “not pretty”, “ugly woman” in the Petronian vernacular).
Fagiolino has a nightcap with a big bow, he is wearing a short jacket, a shirt with a bow tie, and white striped red socks.

The full name is Sganapino Posapiano Squizzagnocchi also known as Magnazza, and it is born in 1877 from the imagination of the young puppeteer Augusto Galli (apprentice of Angelo Cuccoli).
His role is Fagiolino’s friend, but he is appreciated for his simplicity and sympathy; he is naive and defends himself with the “granè” broom that calls Carolina in confidence.
Sganapino can derive from the distortion of the dialectal “canapia” (which means “long nose”) or from the ancient “sganapèr” (which is the act of devouring voraciously).

Nice and smart Modenese mask belonging to the category of the gross and ignorant peasant. Troubled in the soul for social belonging, Sandrone tries to appear more educated than he is. He strives to speak Italian giving life, however, to an incomprehensible and meaningless “pastiche”.
His costume consists of a large dark jacket, under which he wears a polka-dotted gilet and the inevitable red and white striped nightcap. His birth is attributed to puppeteer Luigi Campogalliani (1775 – 1839).
An almanac from Reggio Emilia, though, reports the news about a character named “Sandron Zigolla da Ruvolta“. Over time he was joined by his wife Pulonia (Apolonnia) and a son Sgurgheguel (Sgorghignello).

Tasi is the protagonist of the famous and historic Carnevale di Cento, which is one of the two Italian Carnival – together with Viareggio – twinned with the Rio’s one. He is represented while holding a white fox on a leash. Legend has it that, forced to choose between his wife and a good glass of wine, he preferred to go to the tavern.

Lazzarone is a fifteen-year-old from the early twentieth century, born in San Lazzaro (Bologna).
The mask was born in 2001 from an idea of the City and totally invented by the children of the primary schools coordinated by Riccardo Pazzaglia who, in addition to giving life to the puppet, played him during the Carnival.
The name, in addition to having assonance with that of the city, is a dialectal adjective used good-natured to indicate the brats in general. He has little desire to study even if he is always ready to make pranks. 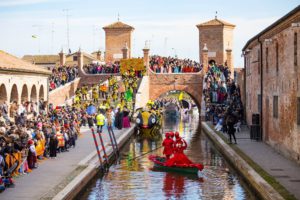 4 Carnival events not to be missed in Emilia-Romagna

4 Carnival events not to be missed in Emilia-Romagna