The Arch of Augustus in Rimini

More than 2000 candles have been blown out since Rimini was founded in 268 BC.
It’s an ancient history that marked the fate of all Emilia-Romagna; Romans started right in this city that process of colonization that led to the conquest of Northern Italy in the centuries to come.

Besides the medieval period and the subsequent developments during the contemporary age, many monuments still witness that distant past (see HERE for a list), some of which are truly noteworthy. 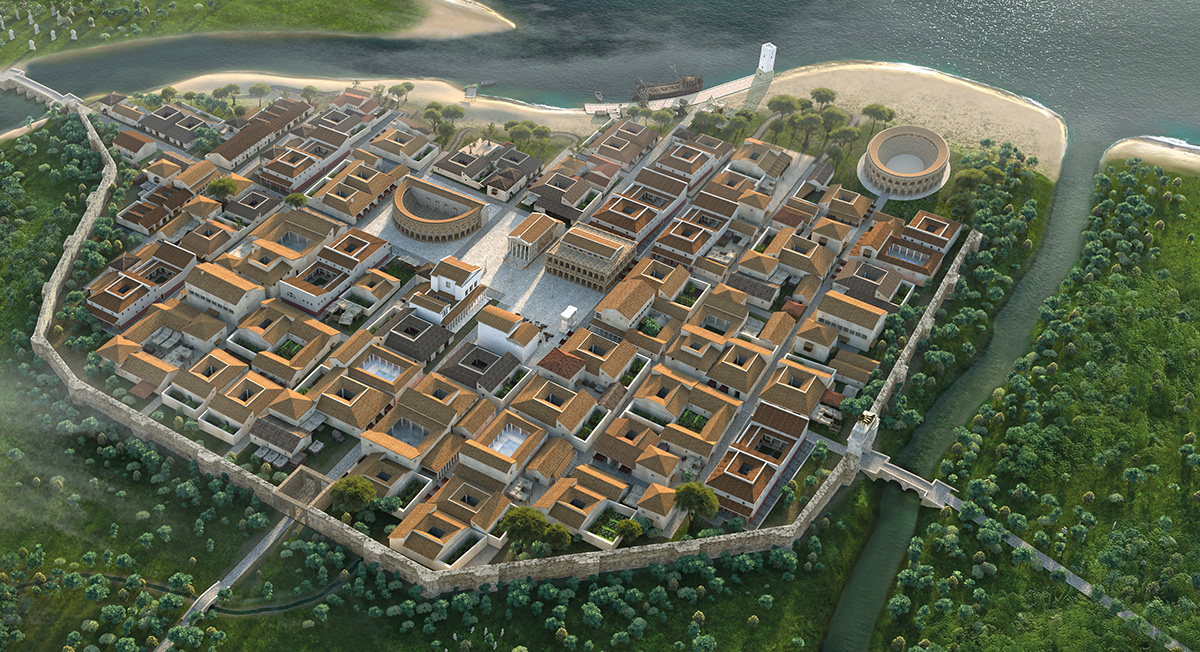 The famous ARCH OF AUGUSTUS is undoubtedly one of these. Along with the famous Tiberius Bridge, we can consider it the most representative monument in the city. No wonder that both monuments are represented on the emblem of the city.

It is presumably the oldest triumphal arch in all Northern Italy, built in 27 BC to welcome those who were about to access the city from the Via Flaminia (the road artery asked by consul Flaminius in 220 BC, connecting Rimini to the capital, Rome). The arch was a celebratory work, created by order of the Senate and the Roman people to pay homage to the great Caesar Octavius Augustus, who had encouraged many initiatives during his princedom, and worked hard for the restoration of the city of Rimini and the Via Flaminia.

In the upper part of the façade of the arch, you can still read the part of the inscription that lasted to the present day:

The Senate and the Roman people (dedicated) to Emperor Caesar, son of the divine Julius, Augustus, emperor for the seventh time, consul for the seventh time and designated for the eighth, having been restored on His behalf and authority the Via Flaminia and the other most important routes in Italy.

The arch was built in blocks of Istrian stone, with a single arch of 8.84 meters. It lies on two half-columns with fluted stems and Corinthian capitals. This monument is not only important for its dimensions, but also―and above all―for its symbolic, religious, and social-political meaning.

Its architecture recalls the features of a temple, but most importantly, the fact that its dimensions made it impossible to set a door. This exalted the Emperor’s policy, who struggled for ensuring peace on the territories (Pax Augustea), making in this way the use of a door at the city’s entrance pointless.

Moreover, the decorations are laden with symbols, even the panels of the tympanum are rich of significance. Between the archivolt and the capitals you can admire, one in each of the four clipei, four divinities: Jupiter, father of all the gods and greatest Roman divinity; Neptune, the god of all waters; Apollo, son of Jupiter and protector of health; Minerva, protector of the city of Rome, of the arts and crafts. On both sides of the Arch are two ox heads, which symbolically acknowledge the city of Rimini as a Roman colony. You’re wondering why? It’s to give perspective and a three-dimensional effect that is obtained through a play of light and shadow creates. The gaze would immediately fall on the inscription, which was in gilded metal at that time, and above all on the sculpture that presumably was placed in the upper part (attic), which represented Emperor Augustus in the act of driving a quadriga.

I’ve said ‘presumably, because there is no certain proof of its existence. This theory stems from a historical and antique tradition of the 18th century, which developed over time until the present day, giving life to several hypotheses, but there has never been clear proof or denial. 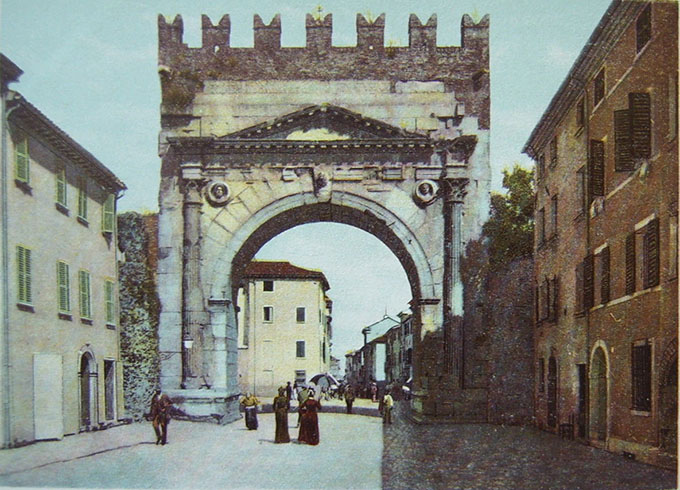 It’s sure, however, that over the centuries, the Arch of Augustus has continued to shape the topography of the city, defining its character and aspect.

A number of interventions, one after the other, were carried out around the monument and on the monument itself, such as the merlon-decorations in the upper part that were added during the Middle Ages. The landscape had changed until recent restoration works, when the Arch of Augustus was brought back to its former glory, reminding us of the ancient origins of Rimini.