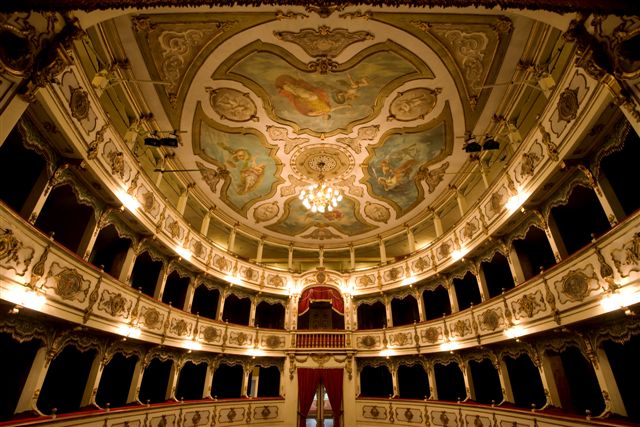 The Giuseppe Verdi Theatre is a small opera house located in a wing of the Rocca dei Marchesi Pallavicino in Busseto, a little town nestled in Parma’s low-rise closely associated with the life of the opera composer Giuseppe Verdi.
From the 13th century, the fortress was the Pallavicino family’s palace, but now it is the city hall after being acquired by the municipality in 1856. 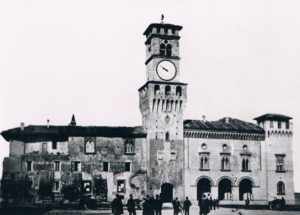 The theatre opened on 15 August 1868 but the restoration works began in 1856.
Prior to 1856, a theatre existed in the same location, but it was too narrow and useless. Designed by Pier Luigi Montecchini, the theatre is located on an upper level of the City Hall and is reached by a large staircase. Outside the theatre is a bust of Verdi by Giovanni Dupré. The interior is traditionally horseshoe-shaped with three rows of boxes and an elegantly designed ceiling featuring four medallions representing comedy, tragedy, melodrama, and romantic drama. 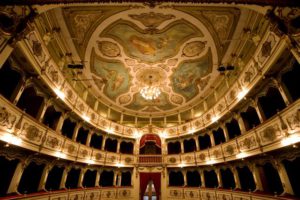 Although Verdi opposed its construction (it would be too expensive and useless in the future, he said) and is reputed never to have set foot in it, he did contribute 10.000 lire towards the construction and maintained his own box. On opening night, operagoers were dressed in green, the men all wearing green ties, the women wearing green dresses. Two Verdi operas were presented: Rigoletto and Un ballo in maschera. Verdi did not attend even though he lived only two miles away at his home, the Villa Verdi, in the village of Sant’Agata in Villanova sull’Arda. His dais lingered empty until his dead.