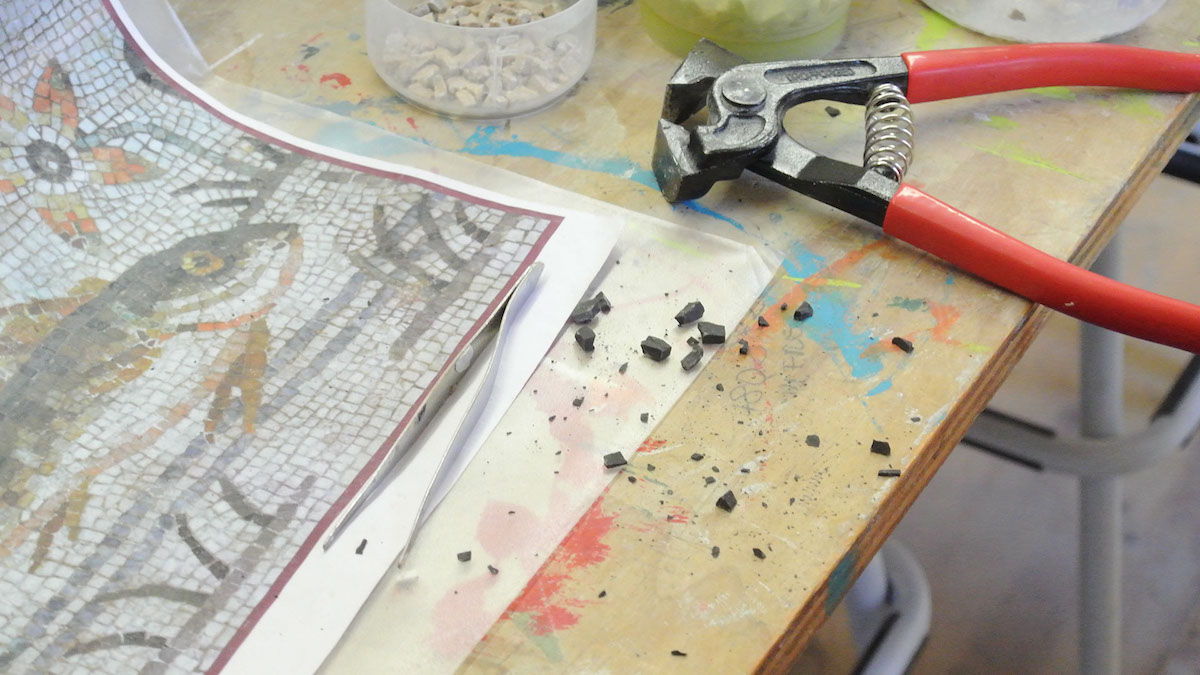 A new episode of our video project dedicated to Emilia-Romagna’s handmade activities takes us to Ravenna to discover how the ancient art of Mosaic has come to our days.
Our host is Arianna, a mosaicist born and raised in Ravenna who, together with her husband Luca, mosaicist as well, has opened a studio specialized in mosaics production, carrying on the ancient tradition and modernizing it.


How did you start doing this job?


Both my husband and I, Luca Barberini, are from Ravenna and we have done the Mosaic Art Institute, the high school specialized in art with a mosaic address; after that, I also attended the school for mosaic restoration so I came in contact with the ancient mosaics, to study and restore them.
After a few years as restorer, in 2000 I won a scholarship and there I met my husband (we did not meet at school because he is 5 years younger than me). During this experience, which lasted 5 years, we not only made 3 exhibitions with reproductions of ancient mosaics but love is also born; so we decided to open our studio, and it was 2005.
Our studio is meant as a workshop where we carry on the ancient tradition, so we use the same materials used in antiquity, vitreous pastes (called smalti, glaze), marbles, stones and river cobblestones.
In addition we use the same tools, hammer and cutter.
Of course, besides the tradition, we also put our personalities in this work, and in this more contemporary side Luca has found his artistic direction; so our roads are a bit different today: I follow the side most closely related to ancient mosaic and commission works, as well as teaching.

How was the passion for mosaic born in you?


When I was a child because I remember that the first time I saw a mosaic was during a school trip to San Vitale and I fell in love with it, I had never seen anything like that, colors in this matter were brighter, they interacted with the light and the space was very exciting to me, so from that moment I immediately had a deep curiosity about mosaic and then my whole school career came as a result, and it was very simple living in Ravenna.


What distinguishes your work?


I deal with the mosaics production and commissions and also the teaching, keeping on this technique so ancient and rare. Laboratories like this are located here in Ravenna and perhaps nowhere else in the world, so people come from all over the world to learn our technique, which is called Ravennian technique on temporary support and is used only here in Ravenna. Then we also use a direct technique on concrete, so on a definitive support, and this is the most similar to the ancient technique.
Luca, for his part, found his expressive way in the mosaic and has re-elaborated the ancient technique: he uses the direct technique on concrete and the same materials used in antiquity, but in a way that synthesizes what the mosaic is: with a few tiles, he create a situation, a emotion, a particular scene that can be of everyday life, but also about political or bizarre themes.

How long does it take to make a mosaic?


The creation of a mosaic is very variable: it depends on how complicated the subject is, how large the mosaic is and how large the tiles that make it are; two mosaics of the same size can require very different times depending on the number of colors, the type of marble and the size of the tiles.

How was the name KoKo Mosaico born?


For many years we had a Japanese collaborator, Takako Hirai, who is a mosaic artist that has now started her own artistic career and lives here in Ravenna. When we opened the studio and had to decide the name, the idea came to her: Koko in Japanese means here, then Koko Mosaico means “here you can find the mosaic” and also our logo resumes the idea of the red dot that marks “you are here” on a map, but elaborated with the mosaic tiles.

What do you like the most about your job?


One aspect of my work that I love in particular is the collaboration with artists. For example a few years ago a Spanish artist came to our lab; he was enchanted by our mosaics and immediately asked for a collaboration, so he sent me his paintings and I realized the mosaic interpretations, which have also been exhibited at the Venice Biennale.
Furthermore I like to think of my lab as an open space, a seaport, because so it is; we meet different people, it is almost as traveling, because you have the chance to get in touch for example with someone coming from Spain for a week, so you can know his culture, that’s a thing I think that enriches me a lot.