New Year’s Eve in Emilia Romagna: just let the music carry you away!

Let the music carry you away on NEW YEAR’S EVE in EmiliaRomagna, this, my impartial advice!
There are several events that are waiting to be lived, from Piacenza to Rimini; if you haven’t decided yet what to do, and are in search of some ideas on how to spend the last day of 2018 in the best possible way, check this little guide.

Here you will find DJ sets, free concerts that, in my opinion, will make you dance and entertain till late night in the piazzas and cities of Emilia-Romagna.

Let’s start from the city of Rimini that this year has rich events scheduled from December 6th to January 6th in a single big initiative: New Year’s Eve in Romagna.
In Rimini, the Italian artists Coez and Planet Funk will perform in Piazza Fellini and in Piazza Malatesta. From 9.00 pm the music of Coez will enliven the city center until midnight when the traditional fireworks will light up the winter sea.
At the same time, Piazza Malatesta will be transformed into a large disco with the exhibition of Planet Funk for a party that will last until the morning with some Italian Club Culture historic DJs: Ricky Montanari and Daniele Baldelli.
Worth a mention also the “Fellini 100 and La Dolce Vita” exhibition, a sort of anticipation of the brand new Fellini Museum that will officially open to the public at the end of 2020, and that will open its doors from December 14th in the historic location of Castel Sismondo. 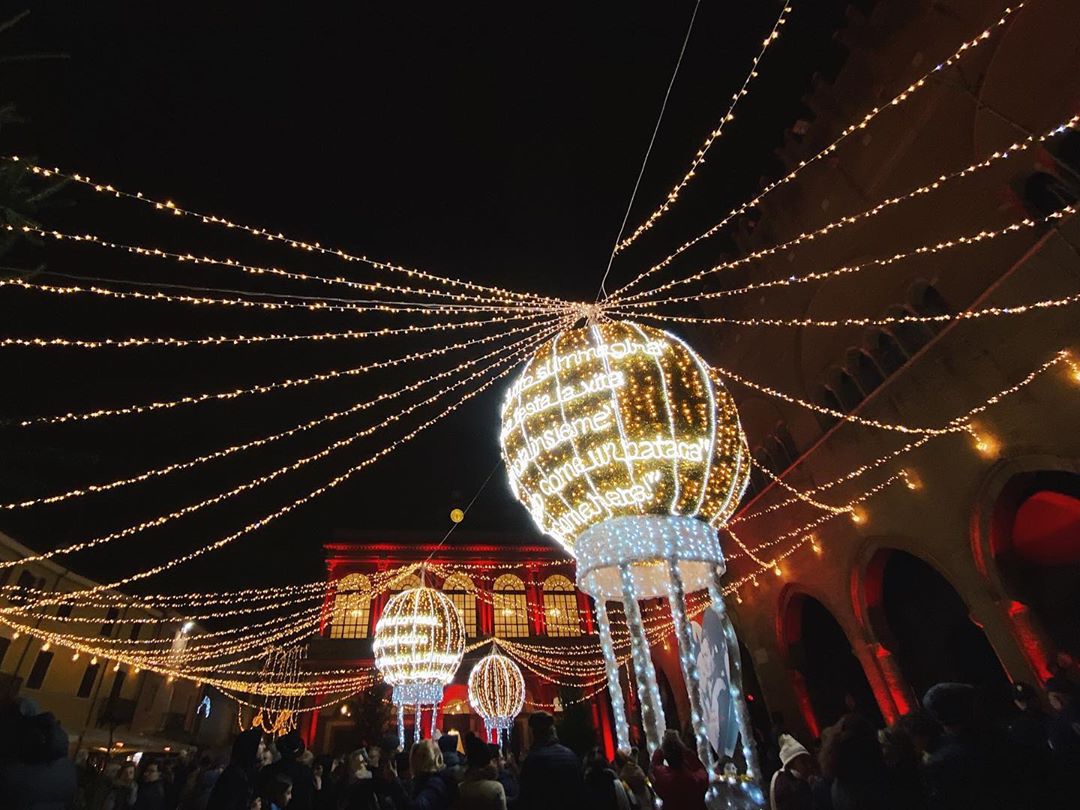 If you like dancing, Riccione is the right place for you. As per tradition, the Adriatic city will host Radio Deejay and its dream team for a three-day in music.
The event will start on December 29 at 16.30 Piazzale Ceccarini when the famous Italian singers Mahmood and Emma Marrone, two of the most famous singers, will perform their free concerts in the city center.
The New Year’s Eve instead will be characterized by a festive atmosphere and beautiful music to greet the new year together with Italian radio speakers Alex Farolfi, Chicco Giuliani and the ballet group of Deejay On Stage always with the conducting of Rudy Zerbi.
Also noteworthy is the Ezio Bosso greeting concert in the packed program of Riccione Ice Carpet events, which will enliven the Palazzo dei Congressi spaces on December 29th.

A great New Year’s Eve party organized in the evocative setting of the historic harbor, this is, in short, the program of the New Year in the city of Cervia between shopping, tastings of local products and the exciting fireworks concert on the historic harbor (but also music, dancing, entertainment and gala dinner at the salt warehouses).

The renowned seaside village of Cesenatico relies on the traditional “New Year’s Eve on the historic harbor“, an outdoor event animated by the music and energy of the Radio Bruno’s DJs. Also, in this case, don’t miss the suggestive floating Marine Crib, unique in its kind.

A New Year’s Day in the sign of celebration and fun is what awaits you in the ancient Byzantine city. This year, the arrival of the New Year will be celebrated in Piazza del Popolo with a great concert dedicated to soul and gospel music with the Spirit of New Orleans + Noreda Graves, which starting from 11.00 pm will lead citizens and tourists to a big party.
We suggest not to miss also the 3D video-mapping installations of the “Ravenna in Luce” exhibition that will see the San Vitale Basilica, the MAR Museum and finally Piazzetta dell’Unità d’Italia with two video projections dedicated to the theme of travel.
Many pubs and clubs in the center will be open during the night for aperitifs, dinners, and balls. Finally, the party will move to the Artificerie Almagià where, until the first light of morning, you can toast the New Year by dancing to the rhythm of the music.
The Byzantine city for the whole month of December and until the first days of January will offer many cultural opportunities with guided tours to discover the historic center and extraordinary openings of its monuments (here the whole program).

As is tradition, the town of Gatteo proposes an afternoon in the name of joy and fun on January 1st, to continue exchanging greetings, dancing, and toasting.
Finally, do not miss in the evening the performances of the Italian comedian of Paolo Cevoli, the singer Ivana Spagna and the overwhelming energy of the OxxxA. 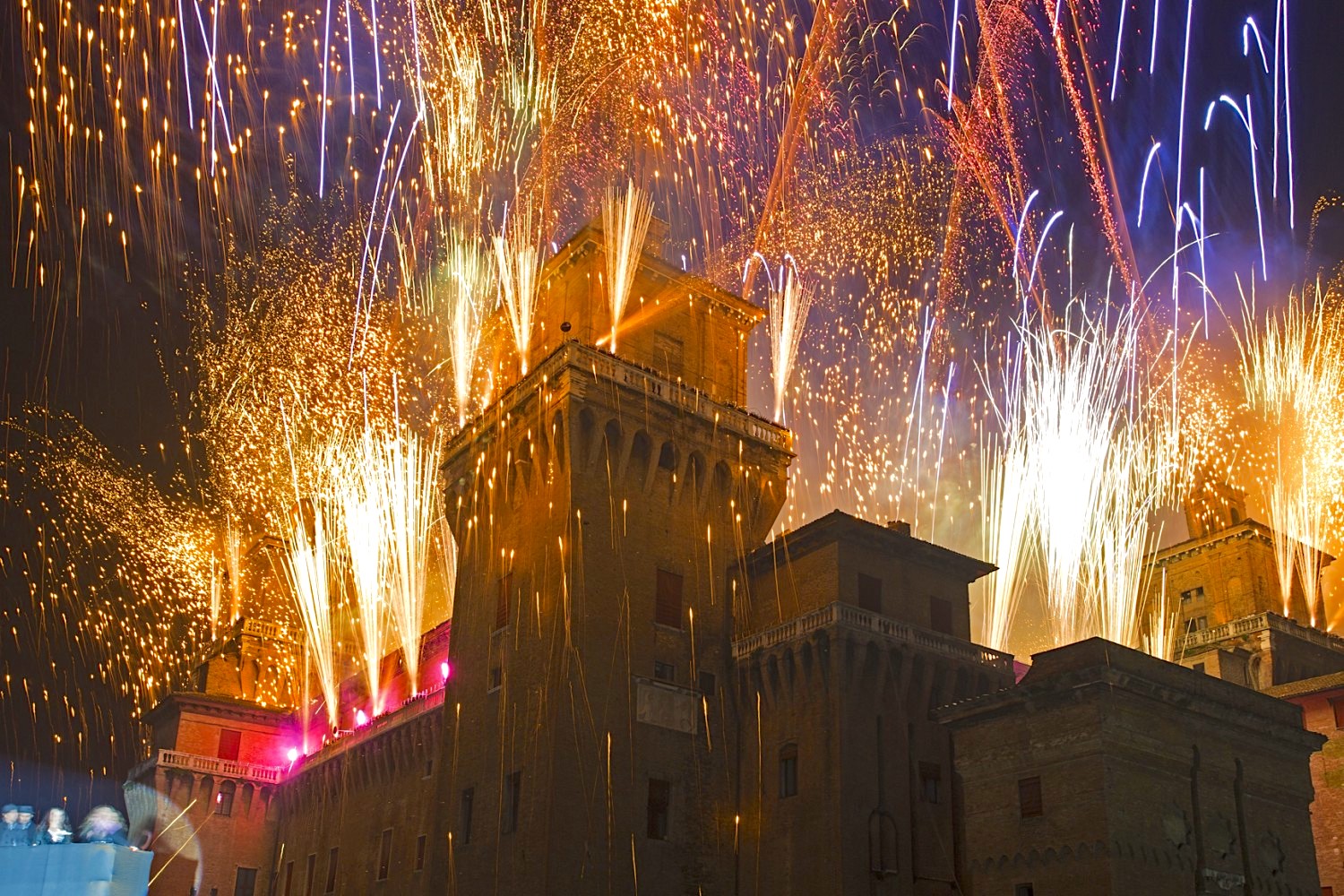 For the night of San Silvestro the city of Comacchio, which has its distinctive element in the water, embraces the element of fire with the fascinating spectacle of the Trepponti on fire. Also for the evening of the last year, Comacchio returns to its ancient splendor with delicious dinners in the enchanting and historic halls of the Museo del Delta Antico, with a visit to the museum, and to Palazzo Bellini.

As a tradition, the New Year Eve in Bologna will be in Piazza Maggiore admiring the burning of the Vecchione
After the bonfire, the party will spread in the clubs and pubs of the city that, thanks to city line buses, will be reachable even at night.
But for New Year’s Eve Bologna is also a suggestive creation of new and engaging environments thanks to the “Lightin’Bo” initiative, in which the most beautiful dance scenes of the cult films of the 1900s will liven up the facades of the most beautiful buildings in the city by playing with lines and architectural elements (Info, places, and program of the projections). 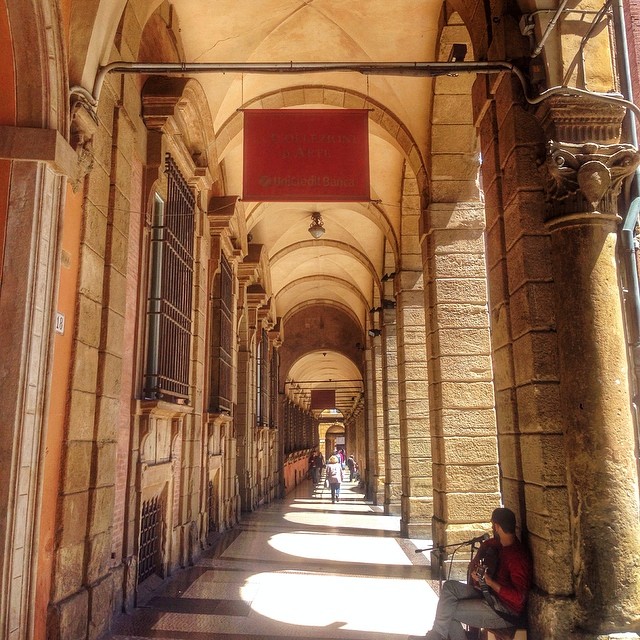 The Popular Orchestra “La Notte della Taranta” will be the star of “Kisses and hugs at midnight 2020”, the New Year’s party in Modena will take place on Tuesday, December 31 in Piazza Roma, dominated by the baroque facade of Palazzo Ducale, home of the Military Academy.

The Ducal city of Parma celebrates the transition to the new year with the traditional free concert in Piazza Garibaldi.
It will be an evening of music and words, interactions and contaminations, which from 10.30 pm will see the performance of Morgan and Andy, founders of the famous Italian band “Bluvertigo”. Then will be the time of Ron, an Italian songwriter who has been a protagonist of the Italian music scene since the 70s.

The beautiful Nina Zilli is the expected protagonist of the great New Year’s free concert in Reggio Emilia.
Starting at 11.00 pm on December 31st, in Piazza Martiri, the artist will perform live to celebrate the arrival of music in 2019 with the entire population of Reggio Emilia. An evening to sing and dance the most emotional and famous pieces of the Piacenza singer, an artist who has always known how to ignite the audience with a very personal sound.

A bubble of beauty to spend New Year’s Eve in.
Also this year, on the night of December 31, the walls of the Cathedral of Piacenza will welcome you to greet the arrival of the new year admiring the stunning frescoes by Guercino.
It will be the chance for an exclusive visit to the museum and to the dome (reservation required). To all the visitors will be offered a buffet on the ascent route and a midnight toast in the panoramic points, from where it will be possible to see also the traditional midnight fireworks. 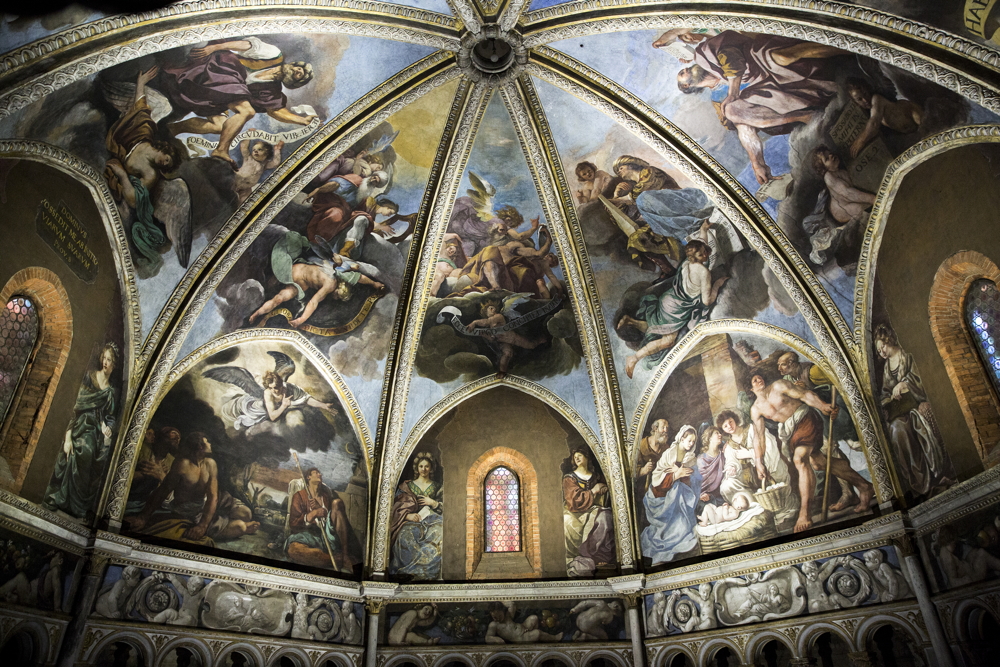 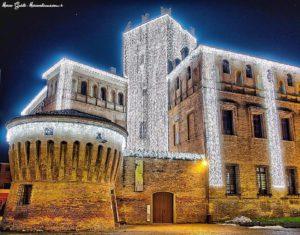 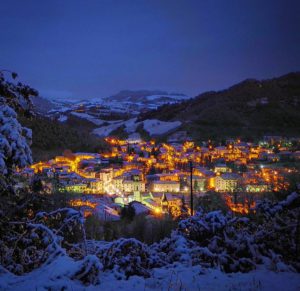 Christmas in Emilia-Romagna: 6 ideas for your holidays on the Apeninnes 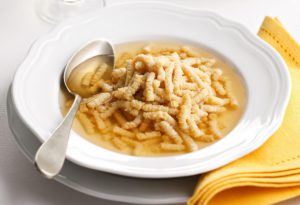 An alternative Italian Christmas Menu Made in Emilia-Romagna 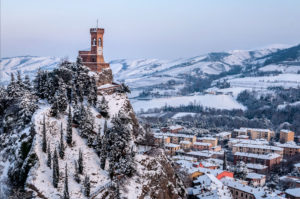 Christmas in Emilia-Romagna: 6 ideas for your holidays on the Apeninnes

An alternative Italian Christmas Menu Made in Emilia-Romagna